My favourite baby naming website (nymbler) is now defunct. You used to be able to insert your inspiration names and check off al sorts of parameters and it would generate ideas for you that you could like to save in a list and then generate more...and...I wouldn't say that we necessarily found every name that way but it's definitely something I played around with when we were in the process of naming our other kids. It's a terrible platform now.
I've seen a few places recommending Name Berry's Name Generator, so I'll have to check that out (but I doubt it will be the same as nymbler was).
The good news is we have plenty of helpers to come up with good names.
Zoë recently handed me this list of suggestions: 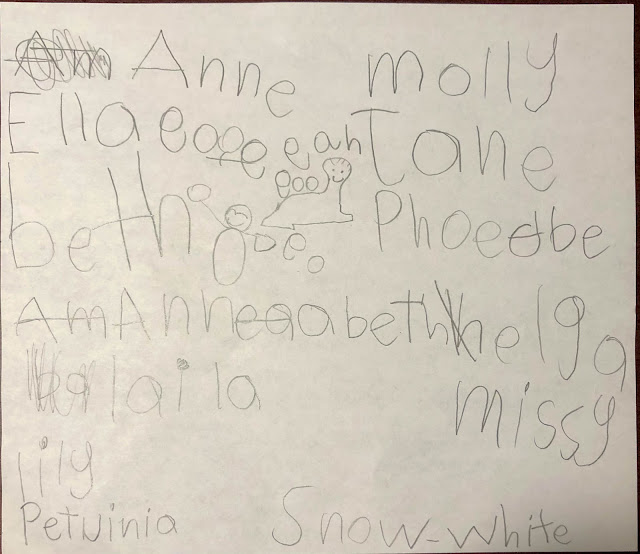 Anne
Ella
*picture of bab(ies) saying 'goo, gah, goo, go'*
Beth
Annabeth
Laila
Lily
Petunia
Molly
Jane
Phoebe
Helga
Missy
Snow-white
Can you tell she's hoping for a certain gender?
I told her that we will love the baby regardless of whether it's a boy or girl and she responded, "But we will love it more if it's a girl."
The names Lily and Petunia came from Harry Potter. The name Phoebe comes from a unicorn series she's reading. I think we all know where the name Snow-white came from. Ella has always been one of Zoë's favourite names. And I love how Anne, Beth, and Annabeth all made the list.
Also...Helga?!
We might need to generate a few names before we decide.
We also do not know the gender, so it might be a good idea to float a few more masculine-sounding names as well.
I'm sure once we're actually to the naming stage of this endeavor we will have plenty of input from this baby's siblings!
Posted by Nancy at 10:47 AM