To celebrate finishing our first week of school, the kids decided we should have a movie night, complete with pizza delivery. So because we're big spenders, we ordered from Little Caesars. We got a cheese pizza, of course, and pepperoni (standard stuff over here), as well as Italian cheese bread (often known as ICB).
Now, Andrew's family has a long-standing joke about ICB because whenever they would order Little Caesars and Karen/Grandma would go to pick up the order, there would be a slice of ICB missing from the box. She would always act surprised and say something like, "What?! There's a piece of cheese bread missing!" and then she'd follow up by lightheartedly blaming it on the workers, always munching on her pizza order, they were!
Of course, we all knew that she had helped herself to a piece of ICB on the way home, but it always gave everyone a good laugh. The tradition has continued and often when Andrew picks up Little Caesars he'll come home and "discover" that a pice of ICB is missing.
But today we got it delivered (we were "boxed in" at our house due to some tree removal equipment parked in front of our driveway) and our delivery person simply pulled up, retrieved the pizza from their trunk, handed it to us, and left. We gathered for dinner, said a quick meal prayer, and then started opening boxes.
We were very surprised when we opened the ICB box to find...this: 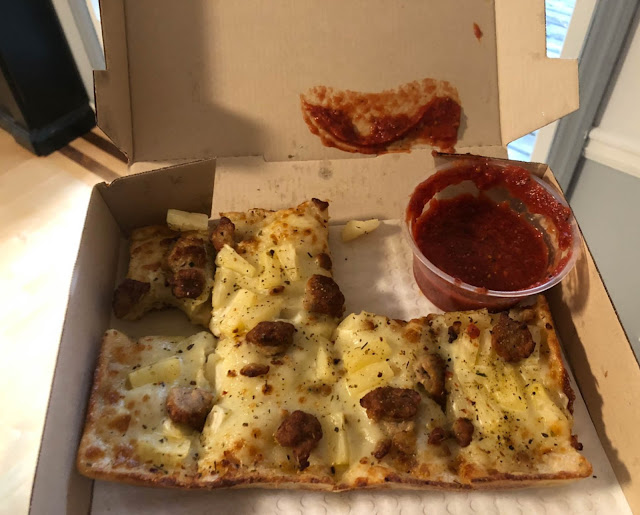 "Huh...there seems to be a piece of cheese bread missing..." I giggled.
"Two pieces are missing," Andrew said.  "And a third has a bite taken out of it."
"And what a weird way to package this. What's with the open marinara sauce?" I asked.
"It's not even warm!!" Rachel said, putting the box back down and backing away.
"Do they even sell anything like this?" Andrew asked. "What's with the pineapple and sausage?"
Readers, they do not sell anything like this.
We were quickly led to believe that some worker at Little Caesars accidentally put their personalized, half-eaten meal in with our order, rather than our desired regular, ordinary, not-half-eaten ICB.
Of course, due to our history with missing pieces of ICB, we found this situation more comical than anything, but Andrew called the customer service line and the representative refunded our money, telling us that this one was on the house...because...gross.
But it adds some depth to the "missing piece of ICB" joke...
Posted by Nancy at 12:27 AM