Happy birthday to me

My birthday was on Tuesday and it felt like a somewhat important milestone for me because I thought that turning 36 was what would define me as being of "advanced maternal age," but as it turns out, any pregnancy at age 35 or later is considered a "geriatric pregnancy" so apparently I've been plain old this whole time.

It's kind of strange because I feel no different than I did at 21 when my first OB/GYN called me a "spring chicken." I went from spring chicken to geriatric in 14 short years! Those 14 years flew by.

Rachel, my spring chicken baby, made a birthday cake for me. She carefully researched the most diabetic-friendly cake she could find—a carrot cake (vegetables!) with applesauce (that's healthy, right?) and cream cheese frosting (cheese is protein!). It was a very delicious cake (I had a slice because I technically haven't been diagnosed with gestational diabetes yet, though I'm sure that's coming). 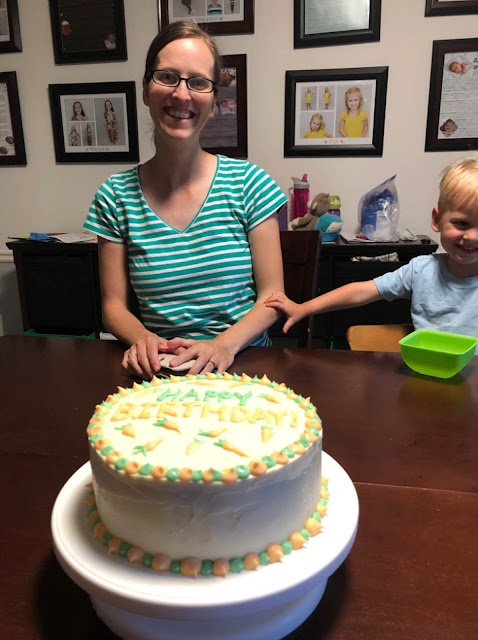 Andrew overheard Rachel asking the kids what colours she should decorate the cake with and they were throwing out all sorts of things—pink, purple, blue!—but he interrupted to explain that culturally carrot cake needs to be decorated with orange and green carrots. Anything else is...unheard of. 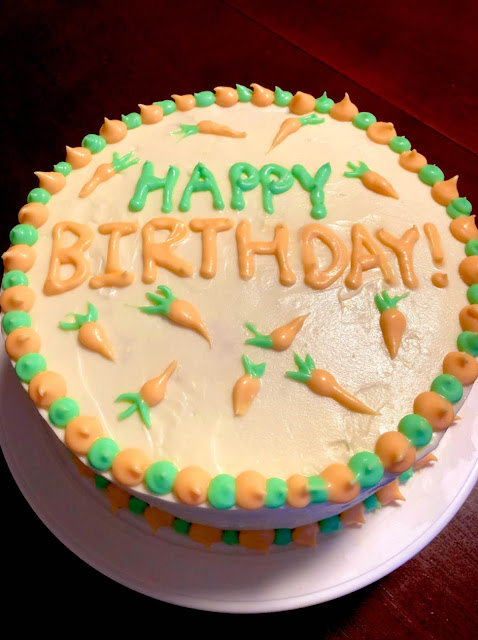 I honestly don't know why this is because we don't necessarily decorate a lemon cake with lemons or a strawberry cake with strawberries (though admittedly those fruits do sometimes wind up as decorations on the cake themselves, and it would be weird to have raw carrots on a cake...). Other cakes can have flowers on them or guillotines or whatever. But a carrot cake simply must declare its vegetable content.
It was a lovely cake and I got to enjoy it with lovely people.
I went to the doctor the next day for a check-up. I heard the baby's heartbeat, which is less exciting now that I can feel the baby kicking (and also because I had an ultrasound at my first and second appointments). Like...I can tell the baby is there, alive and well, so there was no sigh of relief when the doctor found the heartbeat because I knew she would. Sometimes, with earlier pregnancies there was a sigh of relief, but with most of my other pregnancies I only had one ultrasound—the anatomy scan around 20 weeks.
I'll get that ultrasound the next time I go in and then we can get serious about choosing a name for this baby. We've had a few serious discussions about names and a few not-so-serious discussions about baby names.
Ironically—or perhaps not so ironically, given that these pregnancies are four years apart, which mirrors the schedule for which book of scripture we're focusing on at church—we were reading in D&C 75 not too long ago and when we came upon the name Ruggles Eames the children loudly began pronouncing that the baby shall be known as Ruggles (just as they did when we read about Ruggles while I was expecting Alexander). The nickname, however, hasn't stuck this time. In fact, we don't have a nickname for this baby at all, beyond #6 (sorry, #6).
We had one particularly productive discussion about names over the dinner table a few nights ago...until Zoë suggested the name Tic-Tac-Toe. And then I decided to call it a night.

"Well, I don't think we're going to name this baby tonight so let's just clean up from dinner and..."
"What do you mean?" Andrew asked. "We picked great names!"
And that's true. Some of the serious suggestions have "made the list," so to speak. But there was also...Tic-Tac-Toe...so...
"Well, I'm not sure that *I* am settled on any of them..." I said.
"Then get on board!" Andrew said with great enthusiasm.
"She is the ship," Rachel pointed out.
So I put that up on Facebook because it was pretty funny and we got some tongue-in-cheek suggestions there. Uncle Patrick suggested "Baby McBabyface." James Gillespie suggested we call the baby "Tax Deduction #6," to which Patrick responded we could simply call the baby "Stimmy," because of the recently increased child tax benefit (which is not why Baby #6 is on its way, for the record).
So I joked it could be Stimothy for a boy and Stimberly for a girl. Either way, we can call it Stimmy.
But after talking to my doctor yesterday about how fast my labours tend to be and how having a baby on the freeway is kind of my worst nightmare, Rachel joked that if it was a boy and we had the baby on the freeway we could name him "Carson."
"And if it's a girl, we could name her Vanessa!" I replied.
Anyway, I am nervous about labour already. I'm just not good at knowing I'm in labour. Like, even when I try to go in early it's never been early enough.
"So, I think I'm going to go with the hospital in Atlanta," I told the doctor (she has privileges at three hospitals). "Because it's the closest to our house. It's only about twenty minutes away, which will probably be fine...but I don't know. If we hit any traffic, I'm afraid the baby will be born on the side of the road."
"Well, twenty minutes is really pretty close," the doctor said. "I think you'll be fine.
"With my last baby we were only fifteen minutes away from the hospital and...he was almost born in the lobby. Like, I just walked in and had him."
"Oh?" she said. "Well, babies are different. Just this week I had a woman who went fairly fast with her first labour but for her second I had to give her some Pitocin to help her along."
"Yeah, but a lot of my babies have come fast," I said.
"One or two isn't really a pattern, necessarily," she said.
"What about...five?" I asked.
"All five?" she asked.
"I'm genuinely not good at knowing when I'm in labour," I told her. "I showed up at the hospital dilated to a nine with my first."
"With your first?" she echoed. "Okay, you are not good at recognizing labour. We'll start checking out your progress around 36 or 37 weeks. Maybe I'll give you some chucks to keep in your car just in case. We've got time to come up with a plan."
She also noted that if baby doesn't come before 39 weeks, we'd probably induce then (because of gestational diabetes (which may not be entirely beneficial)), which scares me a little because I've never been induced and would kind of prefer not to be. So, this baby needs to come by 39 weeks, but certainly not before 37 weeks (Hear that, baby? We're aiming for a lovely 38 weeks, or so).
My labours have all been fairly fast. Not precipitous, necessarily. Just...fast.

With Rachel I'm not really sure when labour began, though I do note in my blog post that I recognized some contractions in the morning when I got up for work. But then I was just...at work all day. I went to lunch with my coworkers, which is when they began noticing I wasn't quite feeling well. I left work early because I was having "a few contractions" and thought I'd go home to rest, but instead ended up having Rachel less than three hours later. As I mentioned, I was dilated to 9 cm by the time I got to the hospital.

With Miriam I woke up in labour at 4:25 AM and she was born at 7:45 AM; I arrived at the hospital dilated to a 7 (if my memory serves me correctly), and was there for under two hours before she was born.

Benjamin is, of course, an anomaly. I certainly didn't think I was actually in labour with him. But I was at a 5 when they checked me into the hospital. Two shots of Terbutaline (and less than an hour later) and I was already at a 7, though my labour did slow down, apparently, because I was in labour for about 8 hours, I think. And that was the goal all along. They were hoping for 24 hours, but 8 was all they got.

With Zoë I was GBS+ so I knew I needed to get to the hospital with four hours to spare (so I could have two IVs of antibiotics that take two hours to administer before she was born). Somehow I only ended up with one dose of antibiotics before she was born, but I think that's because they were slow to administer them. I kept harping at them to get on it... I woke up with contractions at around 6:00 AM and she was born shortly before noon. If my memory serves me correctly (why didn't I always write down the same information for my labour stories?!), I was also dilated to 7 cm by the time we got to the hospital (and we left for the hospital about an hour after waking up).

And with Alexander, of course, I reached the hospital dilated to 10 cm, ready to push, with my water breaking as I was checking in at the desk. I was also GBS+ with him and didn't get any antibiotics (so we had to stay two nights at the hospital to make sure he didn't contract anything). I am not sure how long I was in labour with him...because when do Braxton Hicks contractions end and real labour begin?

That's a hard question to answer.

I know it's early to be thinking about all this. But Atlanta traffic can be awful so this is a legitimate concern. Let's all just cross our fingers that when the time comes, the time is 2:00 AM (because traffic's usually pretty light then).