Our first stop of the day was actually at the Ocmulgee Mounds National Park, which I will write more about later, I'm sure. For now I will say that they were...hot...and interesting...and hot...and Benjamin's life was made when he got to ask a park ranger how they got their job...and we were all really hot.

I suppose we shouldn't really complain because Salt Lake City hit a record-breaking 106°F today! We were only in the 90s (with something like 97% humidity). So it was hot for us...but not as hot as some places.

What the kids really wanted to do was get to the beach already (but we had to stop for a lunch break somewhere so a picnic at Ocmulgee Mounds it was (safer than attempting a restaurant; not that many dining rooms are open yet)). The whole time we were there the little kids were trying to see the ocean from the tops of the mounds or asking if we were "there" yet, which we weren't, but after a short 2.5 hour drive we finally made it to our "beach hotel."

Alexander seems to be purposely throwing in as many /s/, /sh/, /j/, and /ch/ sounds as he can now that he can actually say those sounds. So our hotel isn't just a hotel. It's a "beach hotel." He's not even disappointed that we're thirty minutes away from the beach. He's just so excited to be here.

He also carefully pointed out each and every "gas station" along the way. Once we passed one and he said, "There's another gas 'tation..." and when he realized he forgot the initial /s/ in 'station,' he just...stuck it on the end. So he ended up sayin, "There's another gas tay-shun...ssss!" He's getting lots of good practice in and we still find it so ridiculously cute whenever he says anything with any of his new sounds.

Anyway, after checking into our "beach hotel" (half an hour away from the beach), we headed to the beach to play until the sun set (completely neglecting to have any dinner). As we were walking across the boardwalk to get to the beach, Alexander saw the ocean and exclaimed, "That's a big river!"

He was very impressed by the ocean (and practiced saying that word a billion times while he was building sand castles).

Here he is being very impressed: 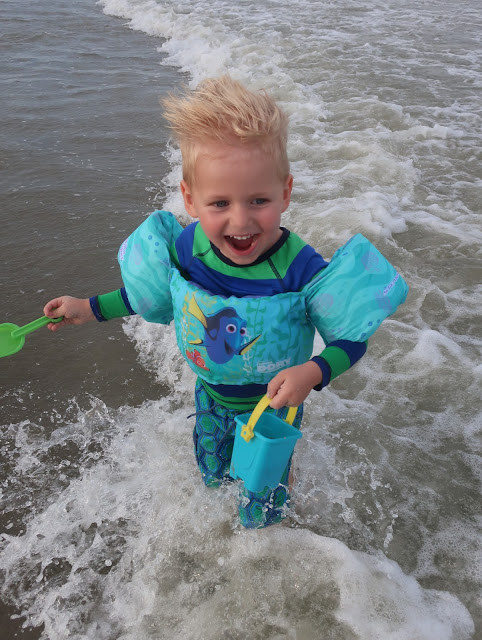 Imagine how this picture sounds—the waves crashing on the shore, the wind whipping through your hair, seagulls squawking in the distance, and, above all that, joyful squeals of laughter. Children are so uninhibited in expressing their absolute joy.
Despite how much he seems to be enjoying the water in the photo above, Alexander was actually so awed by the ocean that he chose to spend most of his time a safe distance from the surf, digging in the sand, while wearing his puddle jumper (which is coast guard approved, and which he rarely uses in the pool these days, but...boy, do I like to keep my children's heads above these waves). 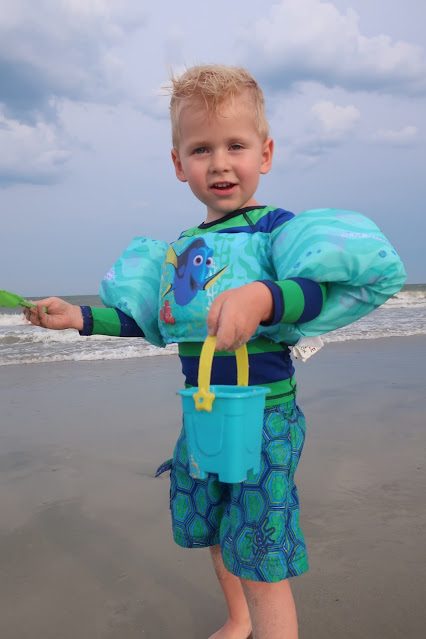 Here's Rachel and Miriam on our boogie boards: 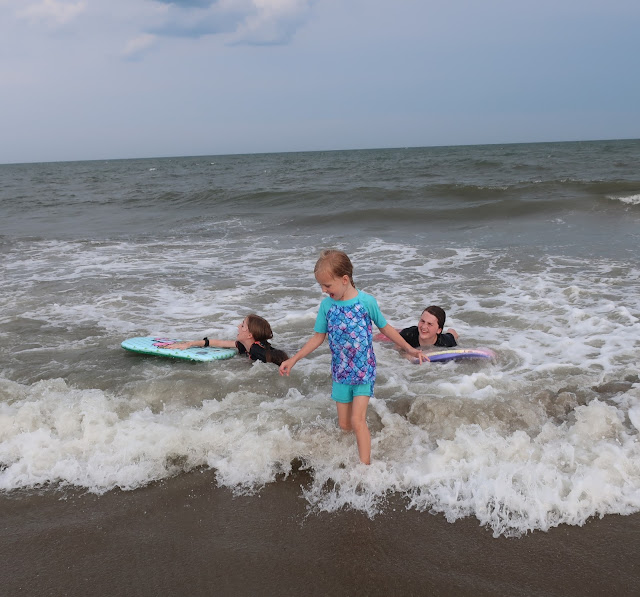 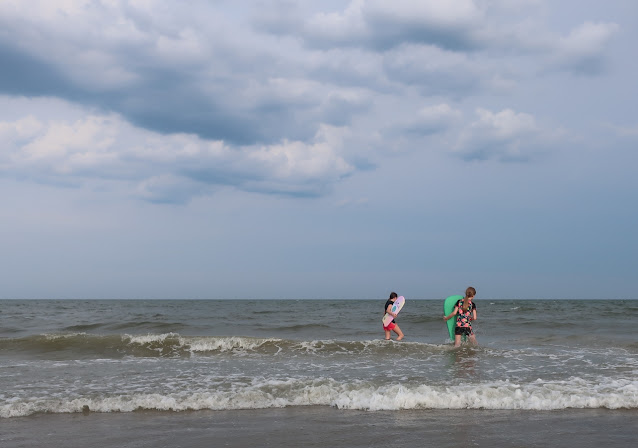 Zoë wanted to try a boogie board, too, but she refused to put on a puddle jumper because she "knows how to swim," so I told her that she wasn't allowed to go in deeper than her ankles until she put on her puddle jumper because the waves were a little wild (it was really windy).
See how windy it was? 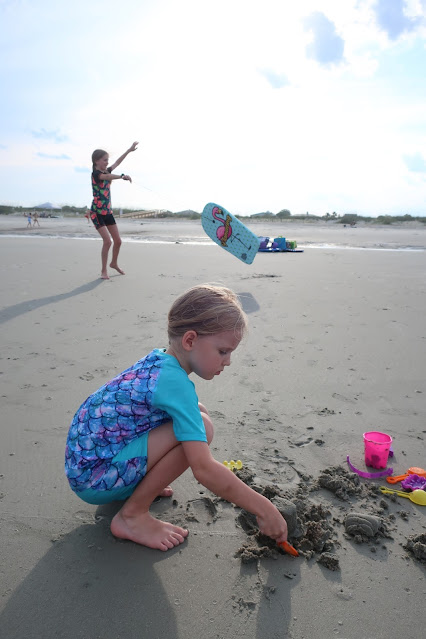 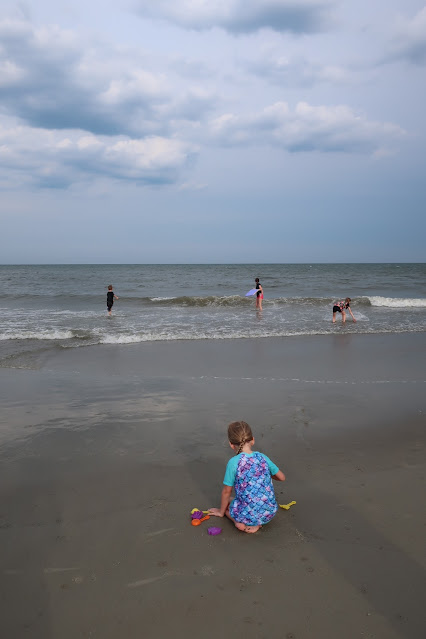 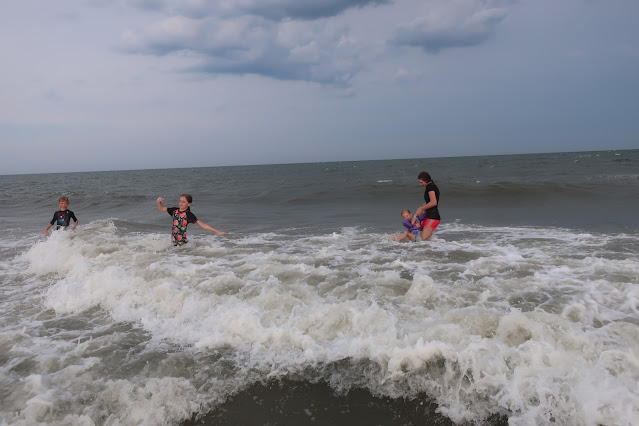 The first wave that hit her snatched her up and tumbled her down the beach quite a ways, dunking her several times. I ran after her and yanked her out of the surf and, uh, she didn't complain about her puddle jumper again for the entire evening. 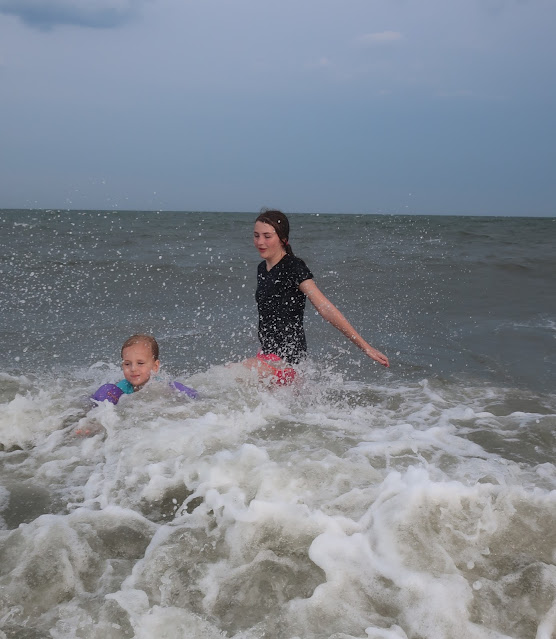 Here she is riding her boogie board to shore on a relatively gentle wave: 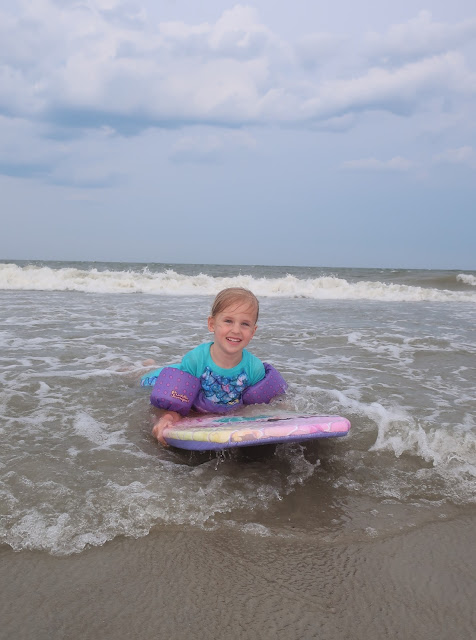 And here are Rachel, Miriam, and Benjamin on their boogie boards (full disclosure: we don't actually have boogie boards for everyone, so when I say "their," I really mean "the boogie board they are currently using"). 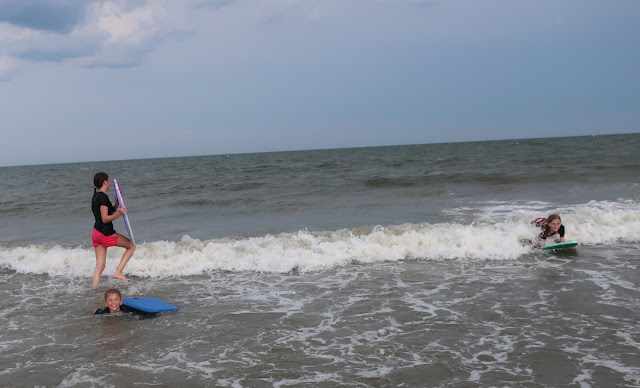 Even Alexander eventually braved the seas! I helped him walk out into the waves, got him balanced on a board, and when a wave hit, I'd let him coast toward Andrew (who was standing on the shore). Alexander loved it so much and wanted to do it over and over again, so we did until I was too worn out by the waves to continue. It seemed like the later it got the more ferocious the wind and waves became. 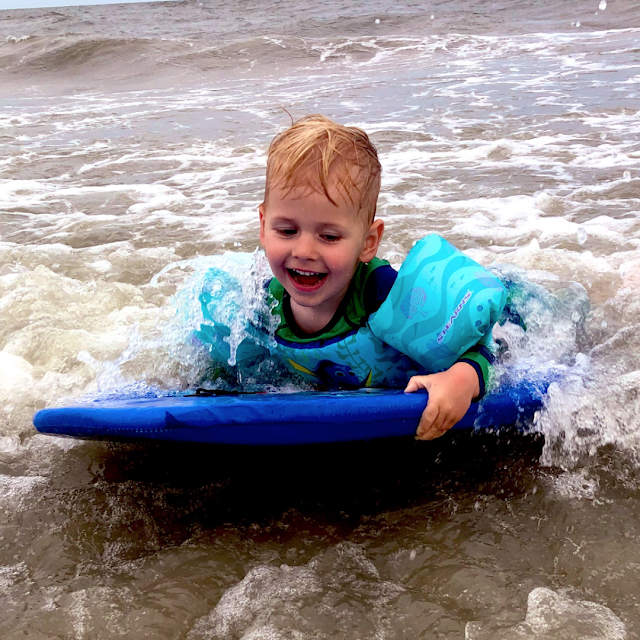 Let's see...my pictures are all out of order because I'm not on my regular computer and had to use a weird program to shrink my photos and...anyway...here are some out-of-order photos...
Benjamin, running into the waves while screaming with delight: 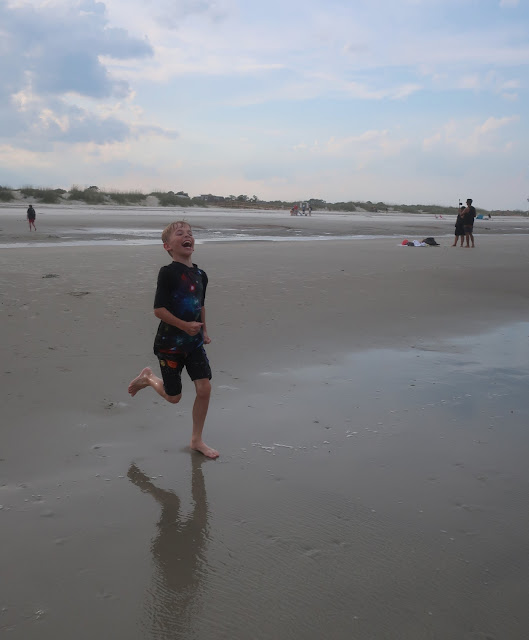 Alexander digging in the sand: 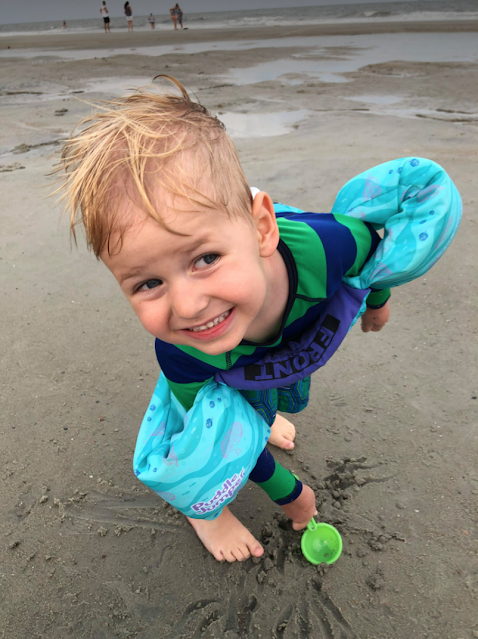 The five children when we'd just arrived at the beach (before Zoë complained about how babyish a puddle jumper was...): 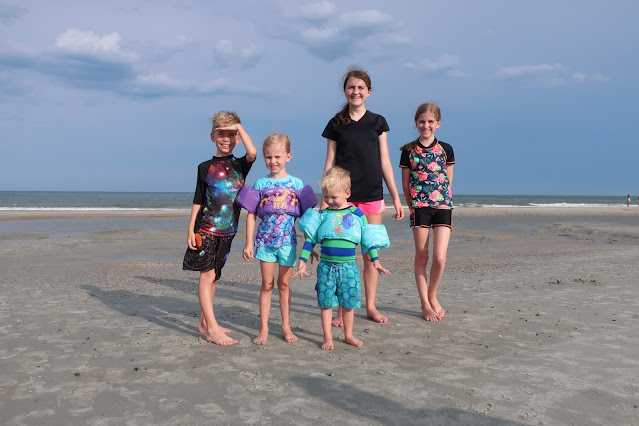 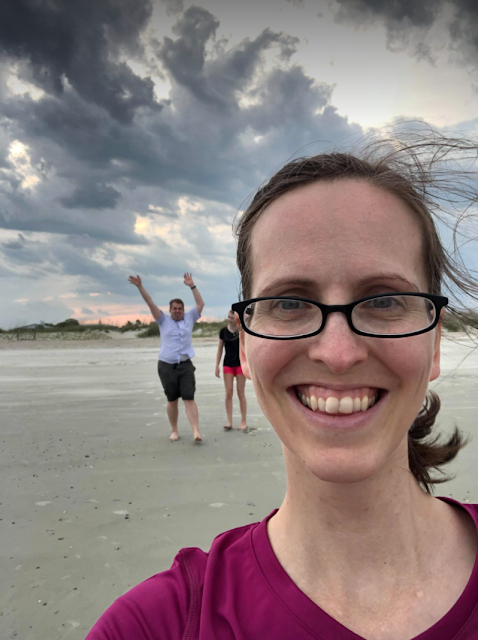 You'll notice he's not in beach attire. He decided he didn't want to get in and that he'd "only get wet up to his knees," but, of course, his shorts ended up getting soaked several inches past his knees. I also hadn't planned in really getting in this evening (and largely didn't) but I put on my swimming gear anyway because I knew I'd end up getting at least a little wet (and definitely ended up in the waves nearly up to my waist at times).

A hint of a baby bump (we're coming up on 16 weeks; I feel very conspicuous already, like when I look down at my belly I think to myself, "I'm huge!" but when I see myself in a mirror (or a picture) I can see that things are a little less conspicuous than they seem from my own point of view): Here's Miriam on the boardwalk, turning around to say goodbye to the beach as we walk into the sunset (that still feels strange to me, despite having lived on the east coast for seven years—that I can't watch the sun set over the ocean on this side of the continent; having grown up on the west coast, frequently visiting the beach in British Columbia (and later in California when we'd visit my aunt), I feel like one should be able to watch the sun set over the ocean...but here the sun sets behind you, across the sand dunes): 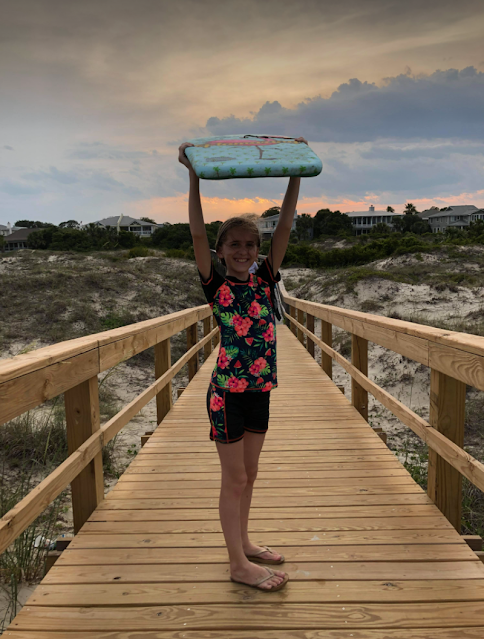 Not that the sunsets are disappointing, or anything (because tonight's sunset was glorious; we're having a thunder storm currently, so the sun's entire bedtime routine was a little over-the-top beautiful this evening and made for a very pleasant drive back to our "beach hotel"). It just feels a little disorienting. Now I'm trying to imagine living on Hawaii (like Uncle Patrick), where hypothetically, one could watch the sun both rise and set over the ocean on the same day if they really wanted to. 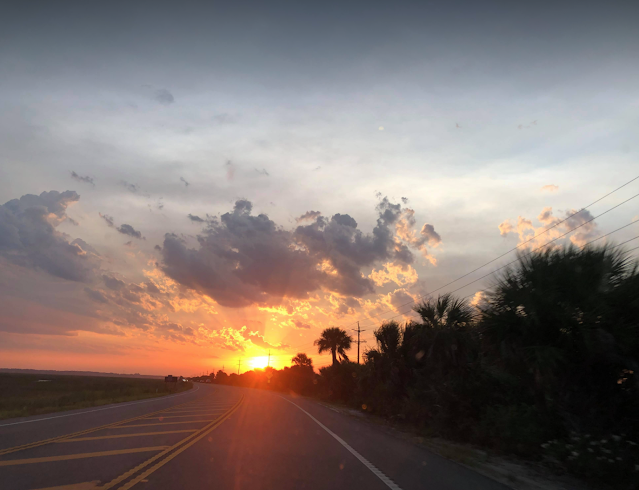