A walk in the park

I took all the kids (save Rachel) to the park today and the kids noticed that the bramble berries are starting to ripen. I...don't know what sort of berries they are...precisely...though I think they're more like blackberries than raspberries (because they don't leave behind the inside part when we pick them). In fact, I think they're probably dewberries (which are just...wild blackberries). 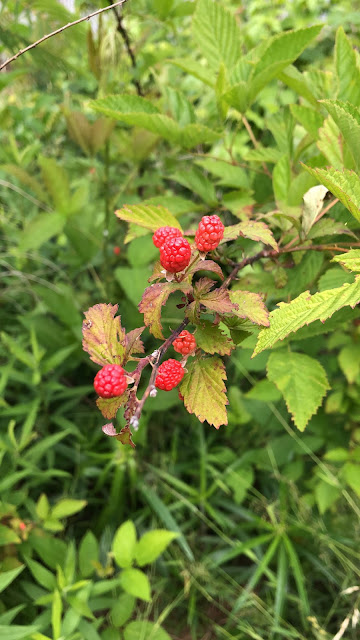 I'm not a very brave forager, but my children always want to know whether things are edible (I'm just glad they check before eating), so I identified the bush (the closest we got was some sort of bramble/raspberry) and then did some quick research to see if raspberries or blackberries have any poisonous look-alikes (they don't). Then I swallowed my fears and told the kids to go for it.

(They're also in the "no-mow, natural-grow" area of the park, so we know they're not spraying pesticides in the area).

Since I'm pretty sure these bushes are blackberries, I'm also pretty sure they were rather unripe, so I didn't think the kids would eat very many (they didn't). They found them to be rather sour (because they're not ripe). 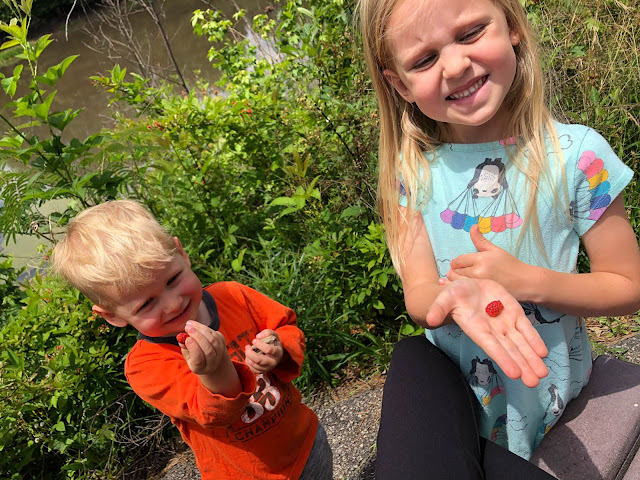 Though Zoë did find a couple ripe ones (they're harder to spot than the bright red ones). 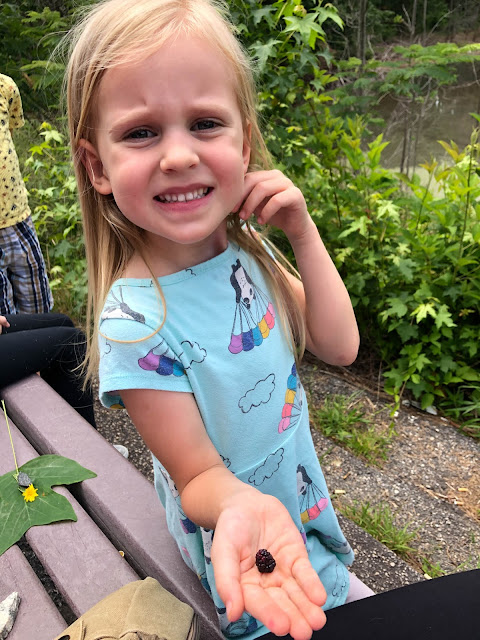 Benjamin was especially excited to be foraging. He's always wanting to do survival-type stuff (which can be hard to do in the middle of a city). 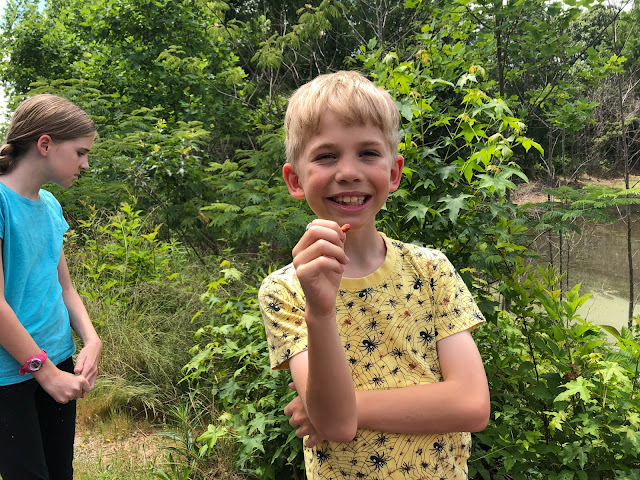 He made this lovely nature collage while we walked and thought these plump, red berries added just the element of je ne sais quoi he was looking for: 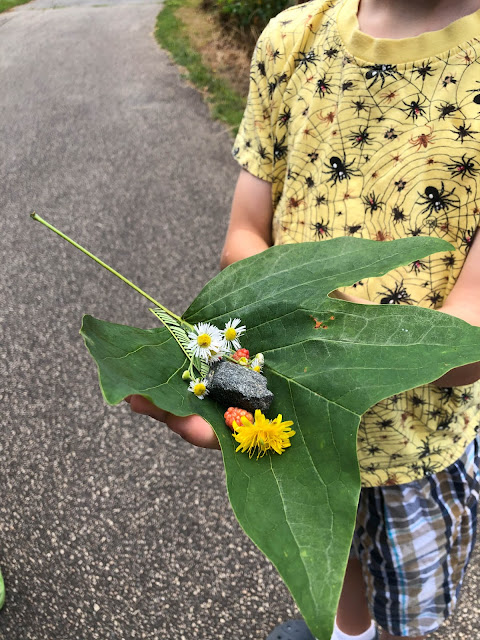 Also, in case you're wondering: Yes, Zoë's dress is on backwards. That's alright because Benjamin's shorts are on backwards as well. And somehow I let us all leave the house like this!
After convincing the kids to leave the rest of the bramble berries for other foraging critters we made our way up to what they call "The Spider Park." Alexander had really wanted to play at the sandbox, but there was a big party going on there (as there so often is), so we passed it by. While we were at The Spider Park, Zoë was just running across the wood chips when she landed on a little piece of wood just so and it pierced her shoe and her foot!
She has bad luck at that playground!!
When she pulled her shoe off, the wood chip came with it, so she was left with a lovely bleeding hole in her foot and we had to pry the wood chip out of the sole of her shoe. And then...we weren't quite sure what to do. I had some bandaids in my purse, so I put a bandaid on it, but our car was still quite a long walk away.
There were a few Arabic-speaking families gathering at the playground, who seemed really nice. They had a bunch of kids and Zoë had been trying to make friends with a little girl whose nickname was Mimi (we know because her little brother startled us when he climbed up high and said, "Mimi! Look at me!" because, you know, we call Miriam Mimi sometimes). Anyway, I told Zoë that I could leave her (and Miriam) at the playground with these families while I took the boys to get the car so that we could pick her up, but she was not a fan of that idea and limped the whole way to the car.
She didn't complain, though, so kudos to her.
We did have a lovely teaching moment when she was trying to make friends with that little girl, though. She came up to me and said, "I don't know how I understand her because she's from another place!"
"Well, she's speaking English," I said. "So..."
"I know! But how does she know English?! She's not from here!"
"How do you know she's not from here?" I asked. "She seems to be just as much from here as you!"
"Yeah, but her parents are from a different country, I think, because they don't always speak English! So they must not be from here!"
"Maybe not," I said. "But just because your parents aren't from here doesn't mean that you're not from here."
"What do you mean?" she asked.

"Think about it..." I said.
"Oh!" she gasped. "You're not from here!!"
"That's right," I said. "But don't you think I belong here, just as much as you?"
"Yes," she admitted.
"It's the same thing for her family," I said.
Anyway, other than the hole in Zoë's foot, our trip to the park was rather lovely. I did have a brief scare this evening when I heard Alexander crying in his bed (around 10:00; there were fireworks) and found him a hot, sweaty mess.
"What's wrong?!" I asked (thinking about those berries I'd allowed him to eat).
"I just couldn't find you," he sobbed.
Fair enough. I had gone downstairs for a few minutes, so he must have looked for me in my bedroom before running back to his own bed to cower under the covers.
"Well, I'm just writing in my bedroom. You don't need to be afraid. But...why are you so hot? You're burning up and you're all sweaty! Do you feel alright? Do you have a fever?"
"I'm fine," he sniffed. "I've just been crying under my covers."
He'd worked himself into quite a state! But knowing I was back upstairs helped him calm down and he's sleeping comfortably now (none of the other kids got remotely sick...and, besides, there are no poisonous look-alikes in the bramble family).
Posted by Nancy at 12:35 AM

Email ThisBlogThis!Share to TwitterShare to FacebookShare to Pinterest
Labels: Georgia, sickness and health