As I mentioned, we stopped by the Ocmulgee Mounds National Historic Park on our way to the beach. We visited the Etowah mounds in October 2019 (and that very well may have been the very last "adventure" we took before the whole COVID thing happened), so we were a little more prepared for what we'd see this time around. This particular site features an earth floor dating to 1015 AD (the lodge built over it is a reconstruction, but it was fun to go inside and look at the floor (admittedly, that's still rather recent history (I've seen mosaics older than this floor, for example), but it's still pretty cool and...among the oldest we've got)).
Here's Benjamin at the entrance to the lodge, anxiously waiting to go inside (he's usually at the front of our group, no matter where we're going): 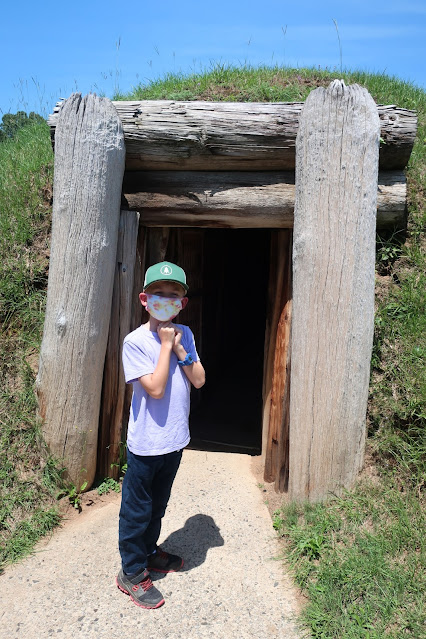 The entrance was a little short, which made Miriam feel claustrophobic... 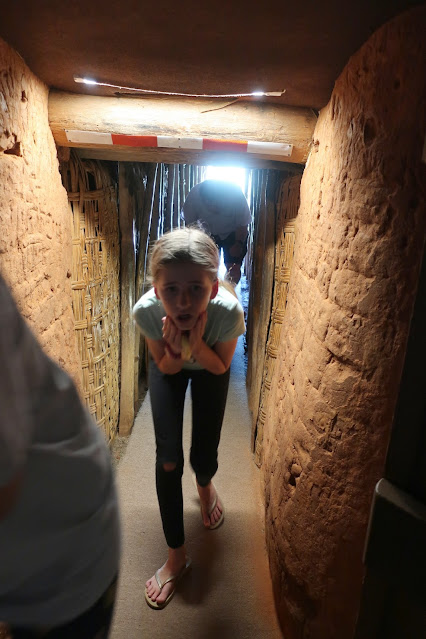 Alexander happily pointed out that the tunnel was just right for him: 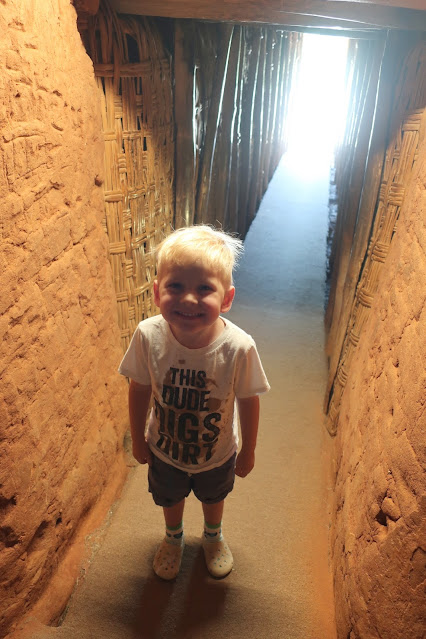 Here's a view of the floor (it's behind plexiglass): 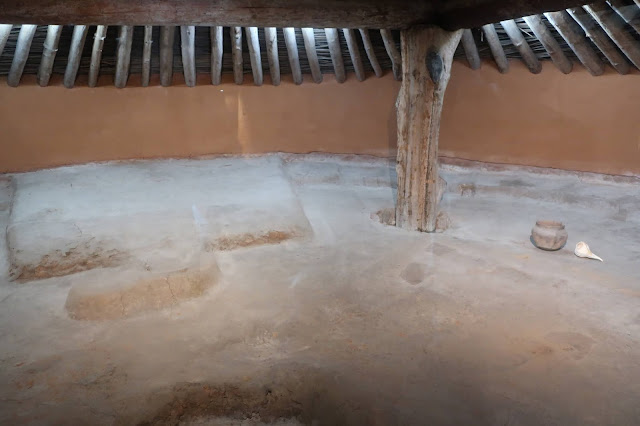 I've already complained about it being hot (it was very hot), so you know that. What you don't know is that we decided to walk the trail rather than drive it. We laughed a little about how different national parks are in the east versus the west. The ranger told us that it would be about a half mile walk, but that it was hot, so we could drive it if we wanted to. Meanwhile, at National Parks in the west rangers are often like, "The trail is a ten-mile loop. There is no road; follow the cairns. You may encounter flash flooding, avalanche, heat stroke, blizzard conditions, cougars, bears, rattle snakes...good luck."
To be fair, our park ranger didn't bother warning us about the alligators... 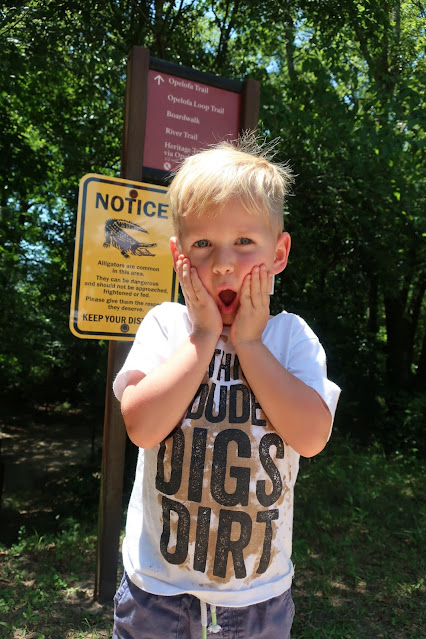 We didn't see any, which Rachel was happy about. She was very nervous about coming across one, so I sang her a song to calm her nerves (Rippy the Gator).
Here's everyone standing by one of the mounds: 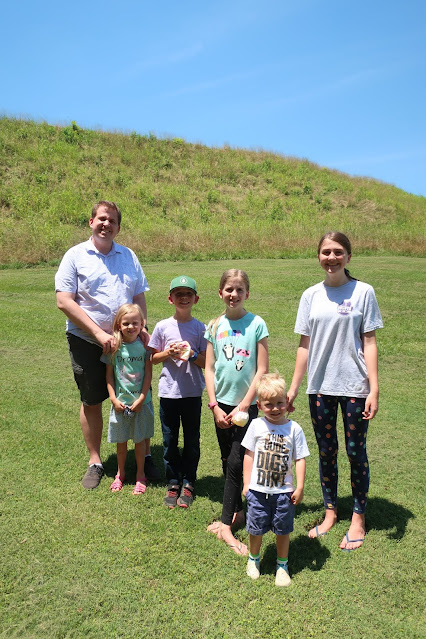 We'd moved off the trail to let another family pass by. We really did our best to stay on the trail because there seemed to be quite a lot of poison ivy along the sides. After Zoë stumbled into some we did some more investigating/identification and discovered that it was not poison ivy, but young pepper vine (thank goodness). I usually pride myself on my poison ivy identification skills (we identify poison ivy on all our walks because it's all over the place here), but this pepper vine tricked me!
Anyway, here's Benjamin racing ahead of everyone on the stairs (he's on the middle platform): 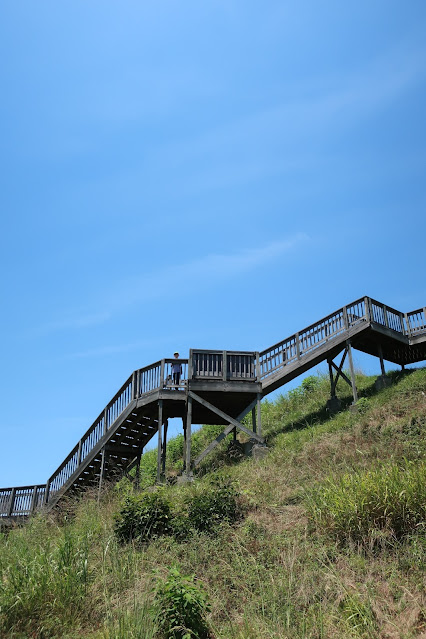 And here's Benjamin on the top of the mound with what he assumed was Atlanta behind him (it's Macon), staring off at the ocean (which...we definitely could not see from the top of this mound): 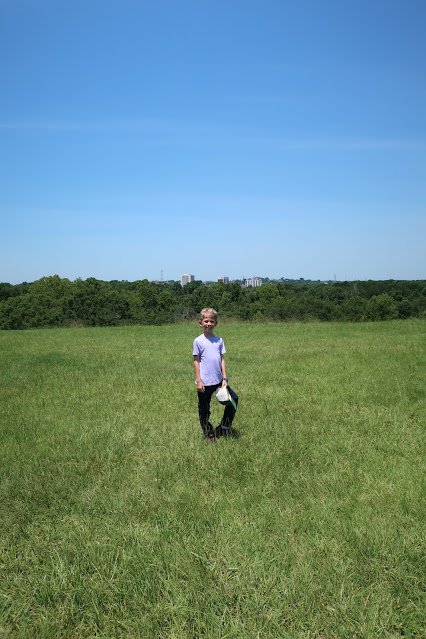 Getting out to the mounds wasn't really a big deal because the kids were all excited about seeing each new thing. But the trail is not round trip. It's out-and-back, which meant there was nothing new to see on the way back and it was hot and humid and everyone was tired and hungry. So the way back felt a lot longer than the way there. But we made it! Some of us had to be carried some of the way, but we made it! 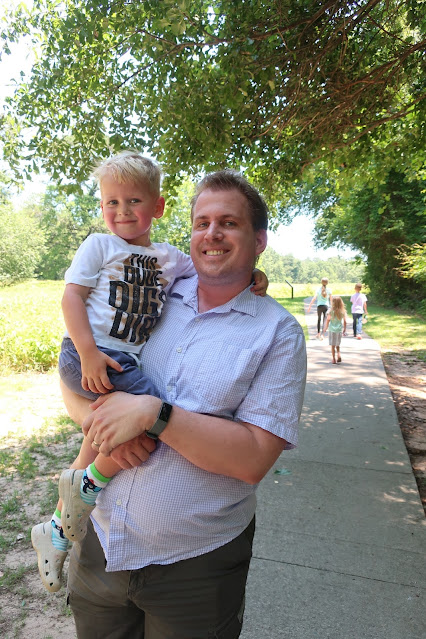 When we got to the parking lot we pulled out our cooler and had a lovely picnic lunch. Alexander was very excited about the doughnuts Daddy bought. But, as it turns out, they were bagels...not doughnuts. And then Alexander was much less excited about lunch (in fact, he flat out refused to eat his bagel, so his lunch consisted of cheese, oranges, and tomatoes). 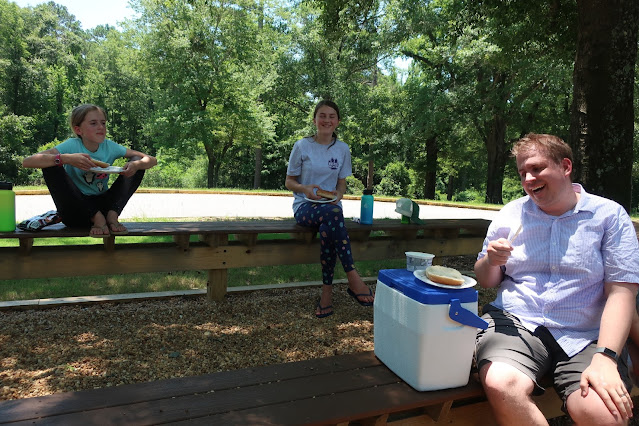 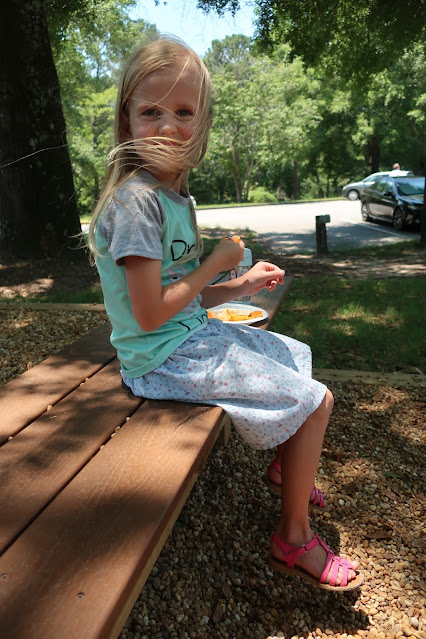 Here's Benjamin beside the ranger vehicle (he would like me to include this in a photo book some day with the caption of "Future Park Ranger"): 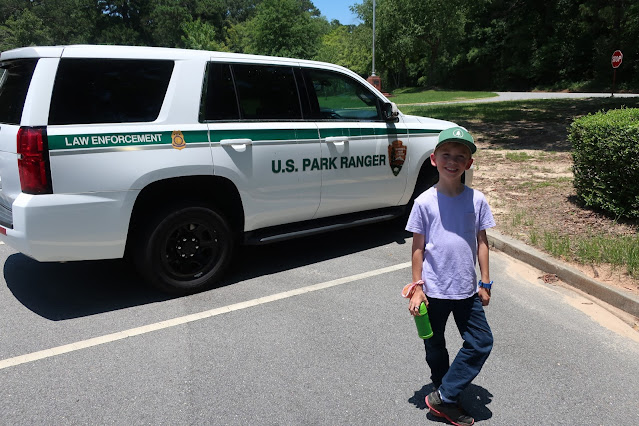 He was very excited to speak to the park ranger after lunch and bravely went to the counter and blurted out, "How did you get your job?" after getting the ranger's attention. The ranger excitedly explained that he had gone to college to get a degree in parks and recreation management, but that his coworker today (he pulled her over to the counter, too), has a degree in anthropology and archeology. There are other rangers that have studied biology or ecology or history or...any number of things. They said to keep learning a lot, to stay curious, and be active. Benjamin loved that advice.
It was a wonderful interaction.
Much better than our interaction before the hike.
See, we'd gone into the museum portion to use the restrooms and get some information and the ranger suggested that we do the outside exhibits first so that we could enjoy the air conditioned museum after (this was very wise advice). And then he said, "So, where are y'all from?"
And we all—as a group, as if none of us could answer this question—said, "Uhhhhhhhh..."
"Atlanta," we finally started chorusing, not at all in synch, but in a chaotic echo of the word, somehow still so foreign on our tongues.
Like, he kind of caught us off guard, okay?
In that moment we honestly weren't sure where we were from and it's not like we had rehearsed what to say when such an unexpected question comes up. Why we felt it was unexpected (our COVID isolation? Our general awkwardness?) and why we didn't have a ready answer...I don't know. It's complicated when you've been moving all around the world and your children have been born here, there, and everywhere. Where are we from...really?
For now our answer is, "Uhhhhhhh...Atlanta. Yes, Atlanta. Atlanta."
It's at least part of an answer.
We were happy to turn the tables on the ranger and ask him a difficult question rather than have difficult questions posed to us. Anyway, here are the kids enjoying some of the inside exhibits: 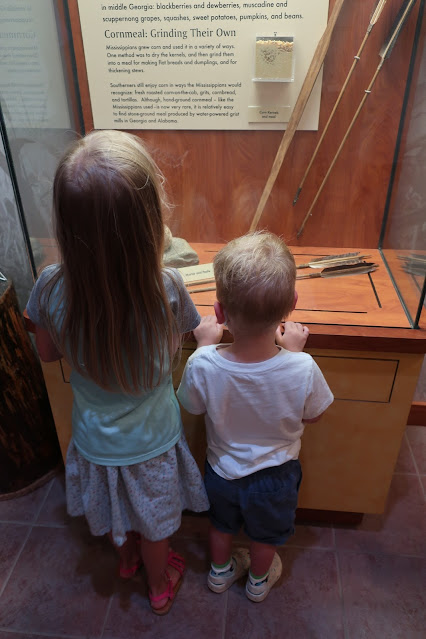 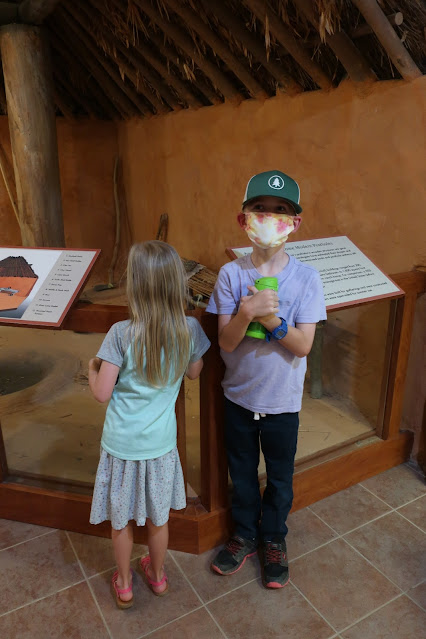 They especially liked the hands-on exhibits. This one was a heavy basket of clay you were supposed to try to lift, to see if you could carry it up to the top of the mound... Rachel is the only one who could manage (but only for a minute before she had to put it back down): 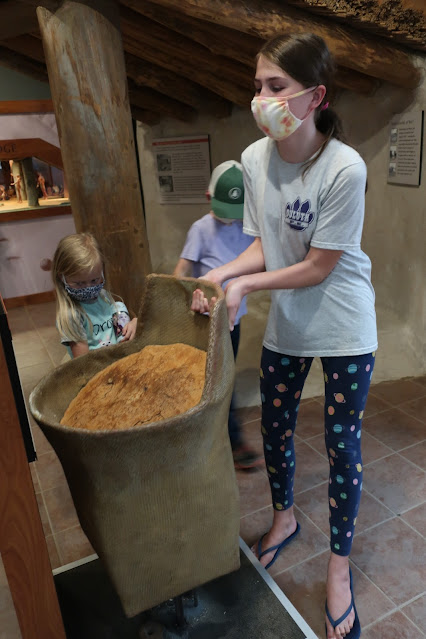 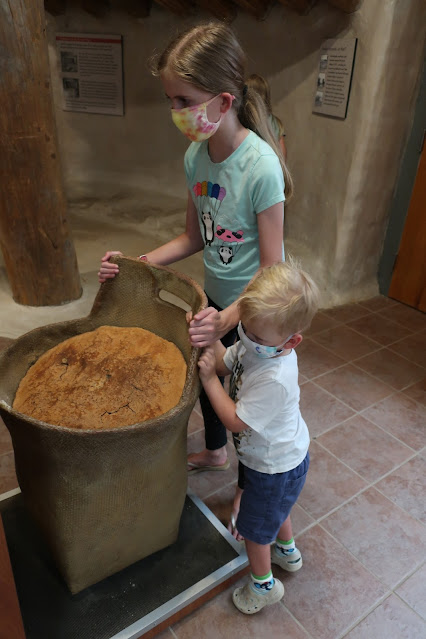 And here are the three little ones sitting in replica seats (the same kind found in the original floor): 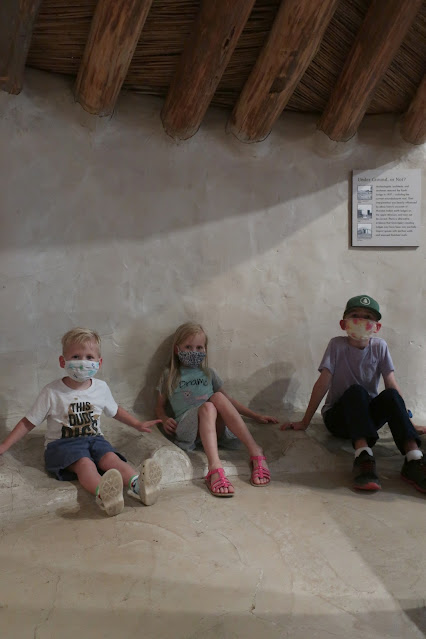 Finally, here they are trying to match up patterns of stamps with the impressions on a clay pot. 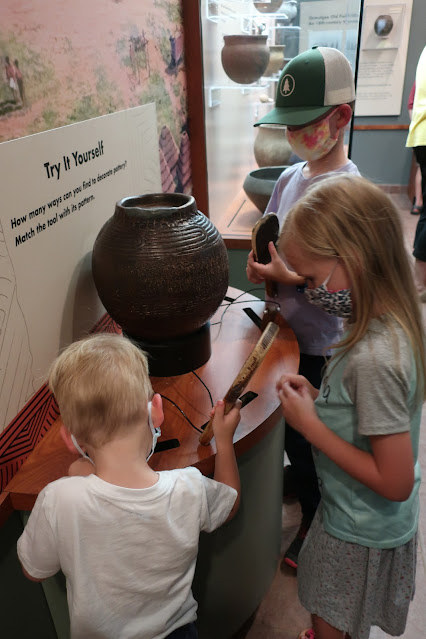 It was a great pit-stop...and the price was right (it was free). It made me wonder why we decided on the Etowah Mounds in the first place (though I know we had our reasons, among them being that (1) it is much closer to our house, and (2) Benjamin had been studying them (like, specifically the Etowah Mounds) at school just before we pulled the kids to homeschool).
Posted by Nancy at 11:52 PM