I suppose I should have saved that picture of Rachel for this moment—the moment where I'm thinking about having been her mom for fifteen years (which feels unreal, if we're being honest).

My mom told me something that my friend's mom used to say (which I never heard her say, but I suppose she had no reason to tell it to me)—when she and/or her daughter found themselves or their relationship in a "tricky situation" that they had to sort out (and I'm sure my children are hearing me say, "Tricky situation!" in the goofy way I do when I talk about Phoebe's insatiable efforts to crawl and climb over everything), she would say, "We need to be patient with one another because we've never done this before. You have never been my daughter before [in this situation] and I have never been your mother [in this situation]."

Something like that. Honestly, I was probably about 15 years old when my mom told it to me and oddly enough, that wasn't yesterday (though it almost feels like yesterday), but it's stuck with me.

I think it's applicable to all people, every day. Or at least almost every day. We are all learning, all the time.

These were the magic words that could unlock stories and knowledge (and prolong bedtime).

So far she's been the only child to hurl the words, "I hate you!" at me. And she hasn't done that since she was, oh, probably six years old, so I consider myself very lucky. She has mellowed out a lot since her preschool days when she would stomp on every crack, singing that song about wishing to break her mother's back. To break my back. She truly wished this over and over. Especially when I would remind her that she needed to put away the silverware.

To this day she doesn't like to touch silverware.

I suppose I should have been more aware of the tactile discomfort it caused her.

At fifteen she will sometimes use metal utensils at dinner. Forks are usually metal. Spoons she usually digs out of the kid drawer—we have those plastic ones from IKEA.

Stories have always been important to her. She's probably my most voracious reader.

Reading is what soothed her spirit and ironed out all those ornery kinks she had. She's done nothing but mellow out since learning to read.

We were discussing whales the other day. I don't know why. Perhaps because I still have a bin of books about ocean creatures sitting in the living room. I put them out intending to provide a feast of knowledge for my children around the time we went to the beach. I haven't changed them out for anything because...well...the rest of our bummer summer happened. So we're still reading about whales, okay?

There also may have been a podcast involved. She likes podcasts.

Anyway, we were discussing how ginormous whales are. NOAA, for example, says their heart alone can weigh 1000 lbs. They're unfathomably large. Like, I just cannot imagine running into a creature that huge.

"Can you imagine if we had a land animal that large?" I asked Rachel.

"Mom," she whispered sympathetically. "We do."

"No, we don't!" I laughed. "Blue whales are the biggest animal. They're monstrously huge."

I interrupt this story to tell you that Rachel wanted to be an elephant when she grew up, until she hit about age five. So you'd think she'd know a thing or two about them, but...

"Elephants?!" I gasped, I giggled. "How big do you think elephants are?"

"As big as our house, probably. Bigger, maybe."

"Rachel. You're not serious! We could fit an elephant in our garage!"

"No way! Elephants are huge!"

"They are. They are very big. But they're not that big. Literally, we could keep a pet elephant in our garage quite comfortably. I mean, we'd probably have to let it out for walks and stuff, but it could sleep in the garage just..."

"I don't believe you. Have you ever seen an elephant?" she asked.

"I have. And I know they're not that big. Have you ever seen an elephant?"

She has. We have a picture of an elephant reaching over a fence to suck a peanut off her head. She did not love the experience. But you can see that Rachel sitting on her Daddy's shoulders is...about par with the elephant (and you can also see all the hands of various zoo-goers who were as interested in getting to touch a blonde baby as they were in seeing the zoo animals). 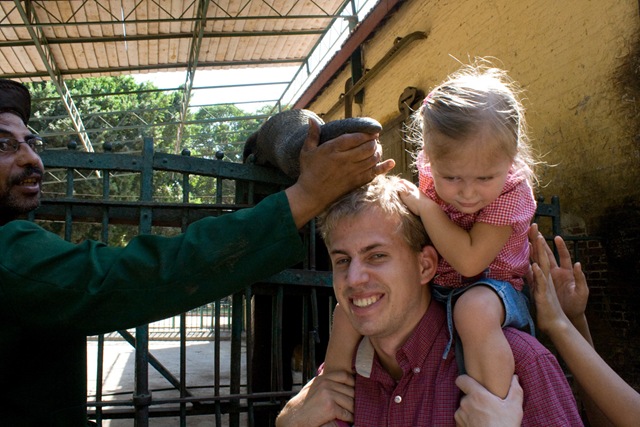 "I remember them being pretty big."

"But not as big as our house, right?"

"Okay. Let's look up some pictures of people standing next to elephants so you can get a good feel for their size."

We raced to the computer and looked up pictures of people standing next to elephants and watched a few videos of people running away from angry elephants.

"Look—that man just whacked the elephant on the butt," I said. "He would not be able to do that if the elephant was as big as our house."

"Then...what was I thinking of?" Rachel asked. "I have this image in my mind of elephants absolutely towering over everything. Oh! I was thinking of oliphaunts! From Lord of the Rings!"

Naturally! That would be the first thing she thinks of!

"Those are at least as big as our house," she said confidently.

At least she knows Alaska's not an island...now.

Not too long ago (right around the Fourth of July) we were playing Switch Sports as a family. There are only four controllers, so we had a little tennis match going on in our TV room with four players—Andrew, Rachel, Miriam, and Benjamin—jumping all around.

Alexander was turning somersaults on the couch. Zoë was reading a book. Phoebe was crawling around finding various things to pull herself up on. I was sitting on the couch keeping an eye on her, when *WHACK*!

The whole room went silent while everyone processed what that noise was.

She was playing very passionately for her team (she does a lot of things with unparalleled passion) and had swung her arm back to wind up for the ball and...connected with my head.

I can honestly say that I've never taken a punch straight to the head like that before.

All I could think about was all the times I've seen people be punched on television and they, like, pull out some tough-guy line or even a joke or...I dunno...just spit out a tooth and ask if they want to punch them again. And, like, I'm pretty sure that's not ever going to be me.

Apparently when I get punched in the head I just...feel dizzy and start crying.

I had nothing tough or witty to say about this situation.

I got a pretty little goose egg but, miraculously, I didn't develop a bruise. I did, however, gain everlasting rights to tease Rachel about having punched her own mother.

Or a dog pile (which is kind of like grace).

I ended up at the bottom of this thronging, octopodal hug. There were limbs everywhere and so many bodies on top of me. I finally was like, "What I could really use is some breathing room..." and I got what I wanted because, like, I had just been punched in the head.

Even if the day is hard—which it might be—because there's also a chance it might be wonderful.

As Andrew joked the day after we got married, "That's one day down, the rest of eternity to go..."