Here is the condition we left Daddy in (reading his book by osmosis while he took a little evening nap himself): 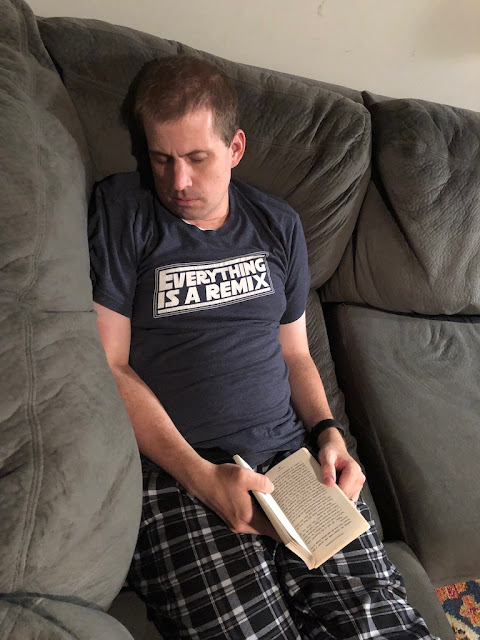 We caught a few fireflies here and there as we made our way to the corner, where we found about a billion cars parked. Some teenagers were setting off little firecrackers, so we lingered at the corner while we watched them set them off. And then I told my crew it was about time to turn around and head to bed. That's when a neighbour that we sort of know/sort of don't know jogged up to us and told us that we should find a place along the curb and get cozy because another neighbour had purchased about $800 of fireworks and was getting ready to put on a big show, just as soon as it got dark enough.
So I thought to myself, "Self, you can drag your kids—who are now jumping up and down with excitement—home and put them to bed where they absolutely won't do any sleeping due to the noise that's about to go down in this neighbourhood...or...you can find a cozy spot on the curb to park yourself while you enjoy the show."
Obviously we chose the latter.
I texted Andrew to tell him that we'd be...late (figured that would be courteous since he didn't even know we were gone)...and then we found a spot on the curb and sat down. 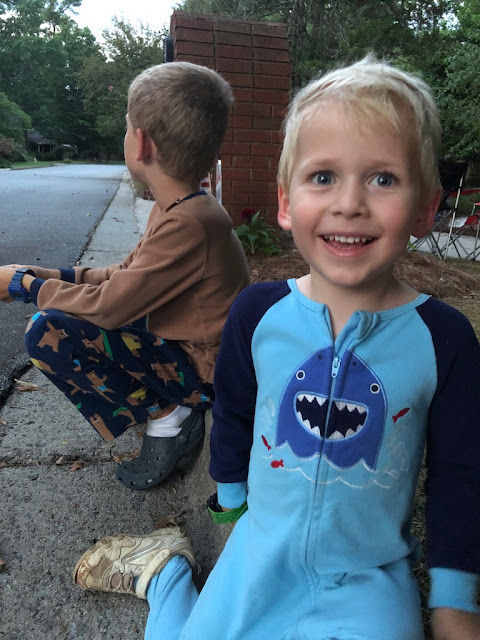 While we were waiting for the show to begin (watching a few "appetizer" fireworks), Grandpa drove by with Rachel and Miriam, who hopped out to sit with us. 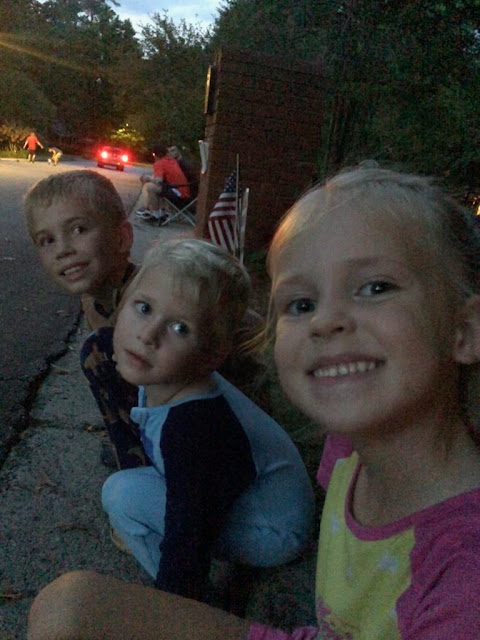 They were glad they did because it was quite the show! 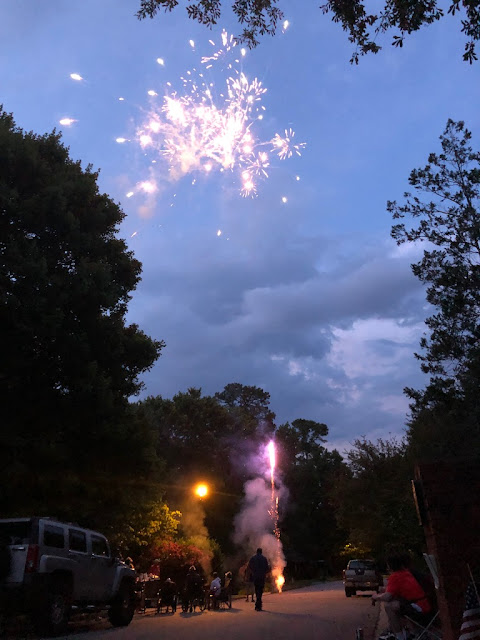 And when our front-row seat fireworks were over, we walked back to the corner and watched the tail-end of another neighbour's fireworks just down the hill: 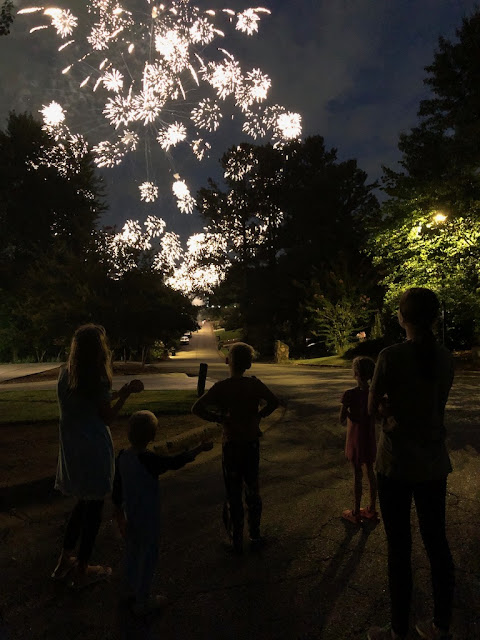 When we got home I was disappointed (but not surprised) to find Andrew and Phoebe playing together in the music room (I'd been hoping they'd both just get a good block of sleep in; sleep has been scarce in our house these days). All the booming in the neighbourhood was really bothering Phoebe, who is starting to feel sensitive about things like thunder and (evidently) fireworks.
On July 4, Andrew and Benjamin set out to finally build a ladder golf game that Andrew picked up the supplies for early in...May. Benjamin had wanted to do some woodworking projects, see, and I found a pattern for ladder golf online that looked doable, so I floated the idea past Andrew, who quickly got on board, and then quickly got boards, and then quickly got bored...just kidding. He got the boards, but he didn't get bored. He got busy. And a vasectomy.
We'd meant to get them put together before his operation, kind of in celebration* of his operation (due to a somewhat vulgar nickname for the game, which I'm sure you can pick out of this line up, courtesy of Wikipedia: ladder toss, ladder ball, monkey ball, ladder golf, ball rope, goofy balls, testicle toss, cowboy golf, and hillbilly golf). But, again...things got busy. And then his vasectomy was...trickier...than it should have been, which lead to a prolonged recovery. He still wasn't quite recovered when we were hit with COVID. And obviously we didn't start this project while we were sick. So that meant another three weeks had gone by without us even considering putting together this game.
* I'm still a little sad about No More Babies, but I also recognize that pregnancy is hard (and so expensive), raising kids is harder (and so expensive), our house is full, and we're getting old. So...it is what it is.
But on Monday Andrew and Benjamin finally got to work: 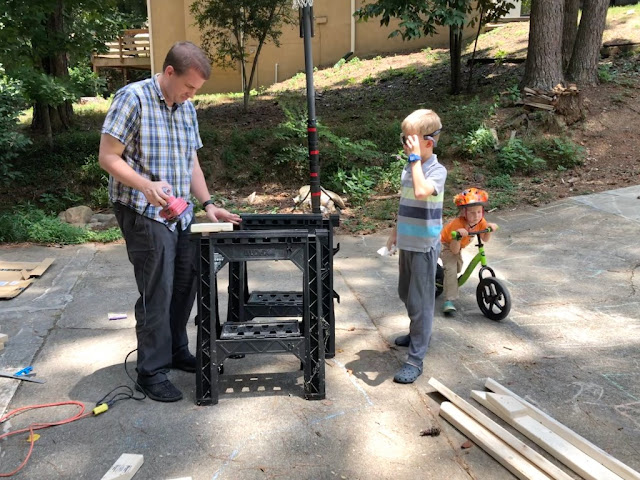 They measured, cut, and sanded all the pieces.
And then Grandpa picked the big kids up to watch Independence Day at his house, leaving Andrew and me home with the little ones. Phoebe was taking a pretty good nap (for once in her life) so we got most of the painting done (with a lot of messy help from Alexander). 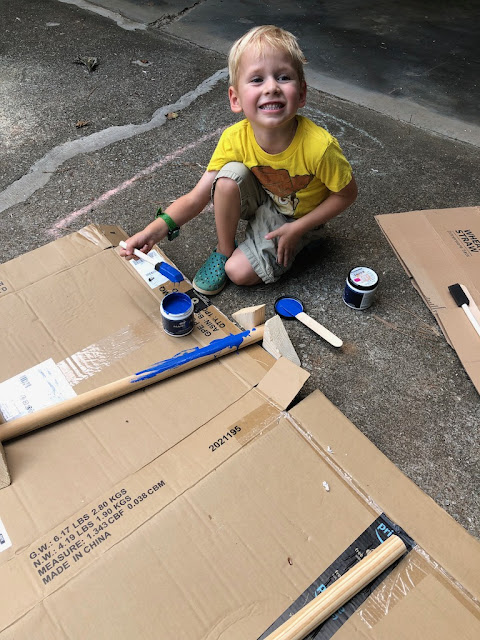 And then Phoebe woke up from her nap and happily sat on the grass while we finished assembling things (which I guess technically we should have had Benjamin help with, but Andrew was in Project Mode and couldn't be stopped at this point). 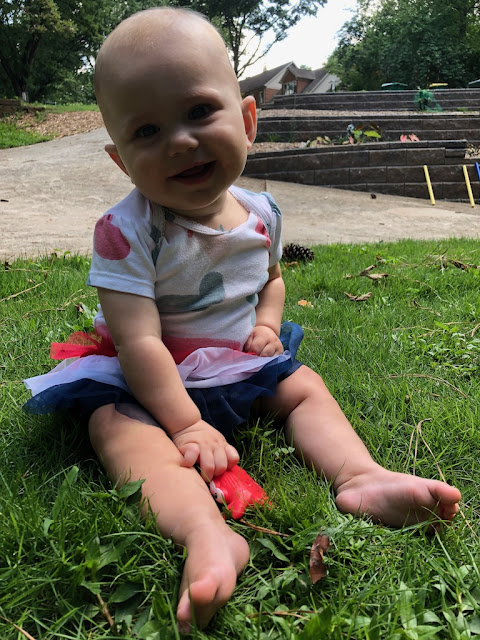 Phoebe's wearing her festive Fourth of July skirt that Auntie K brought for her when she came out in February: 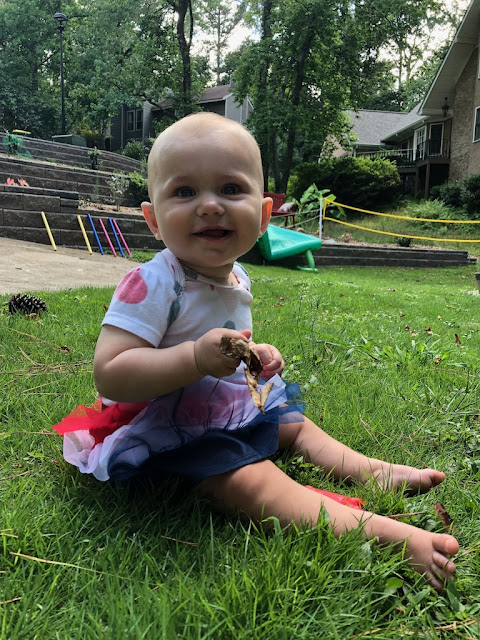 Our only hiccups with finishing this project were (a) the boys had forgotten to cut a second set of legs and (b) we neglected to order the golf ball bolas. So, we did those two things.
On July 5, we went for a walk and on our way back down to our house we were stopped by Little Zoey, who asked if the kids wanted to do sparklers with her. They absolutely did! They were very excited about this because we hadn't purchased any explosives for them this year. Alexander was thrilled to see that the box of sparklers said TNT on it. 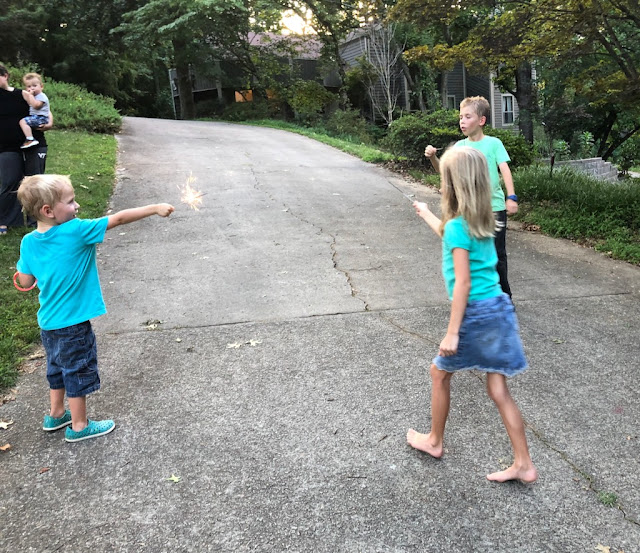 They look like there's a dress code in our house (this is not entirely accidental—Zoë and Alexander meticulously planned their outfits; Benjamin just happens to be wearing a similar colour). 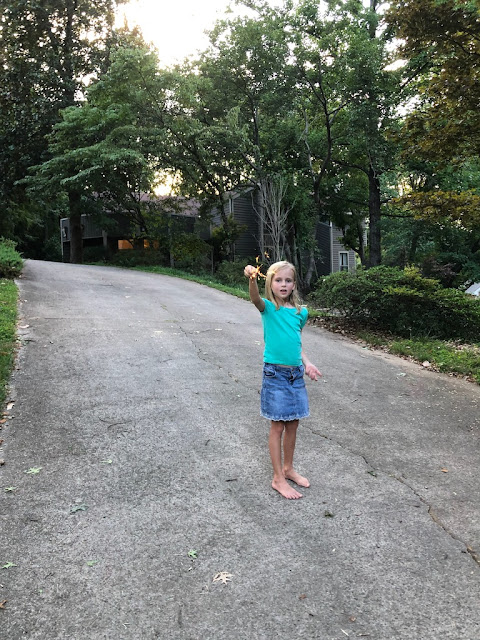 It was so nice of Little Zoey's family to share their sparklers with us, and it was fun to watch the little cul-de-sac kids get so excited over something. Our poor cul-de-sac has been through the wringer!
Our family got hit with COVID.

And then Little Zoey's family.
And then Mr. Paul's family.

And then E got sick with not-COVID (but a raging ear infection that has had her in bed with a fever for a week now).
The cul-de-sac has been eerily quiet, but we're all slowly starting to peek out of our house. The grown-ups were all sitting around looking a little haggard while the kids ran around with their 1000°F fire sticks having a grand ol' time. It sounds a little dangerous, but handing kids fire sure does help with social distancing!
On July 6, Alexander and Phoebe(r) got their first COVID vaccination! 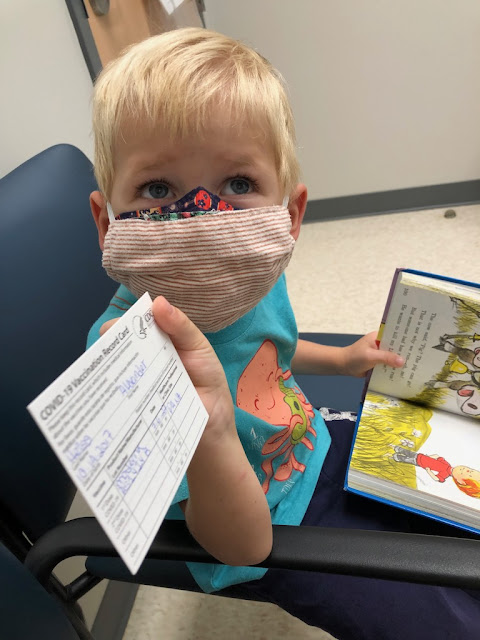 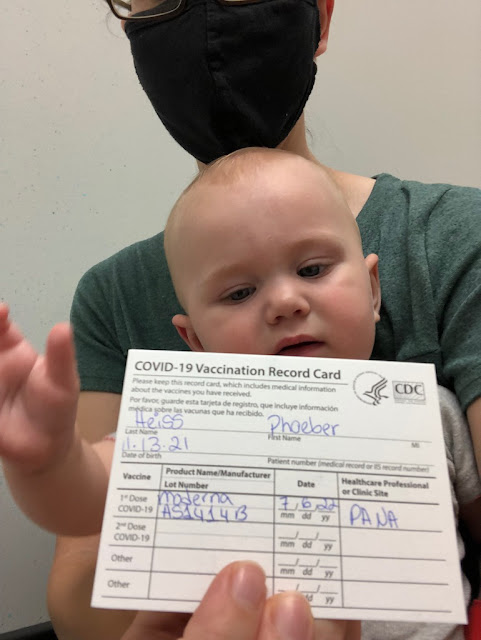 After they got their shots (which they took like champs, by the way), while we were sitting in the room for our 15-minute wait, Alexander and I were reading some stories together while Phoebe squirmed on my lap. I wasn't paying much attention to her because she was safely in my lap. But then she started making gagging noises and I was like, "Oh, my goodness! You're choking! What could you possibly be choking on?! I've been holding you on my lap this whole time!"
There was literally nothing for her to have grabbed (at least...not that I could think of). I went for a fishing expedition in her mouth and found...her bandaid! The one the nurse had just stuck to her leg! Gross!
That Phoebe(r)! She'll find mischief anywhere!
On July 7, our bolas arrived in the mail! So we went outside in the middle of the 95°F afternoon to play. Rachel was already feeling a little sore from her booster shot (which she and Miriam got in the morning), but she still played fine. I think she even got it in her left arm today (the first two shots she got in her right arm), so she was able to use her dominant hand to play. 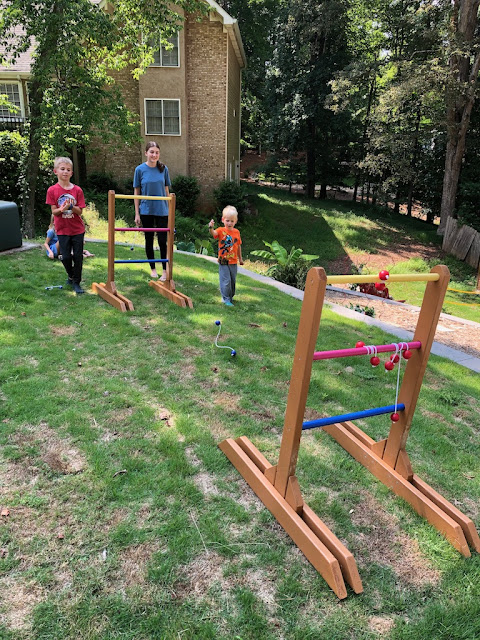 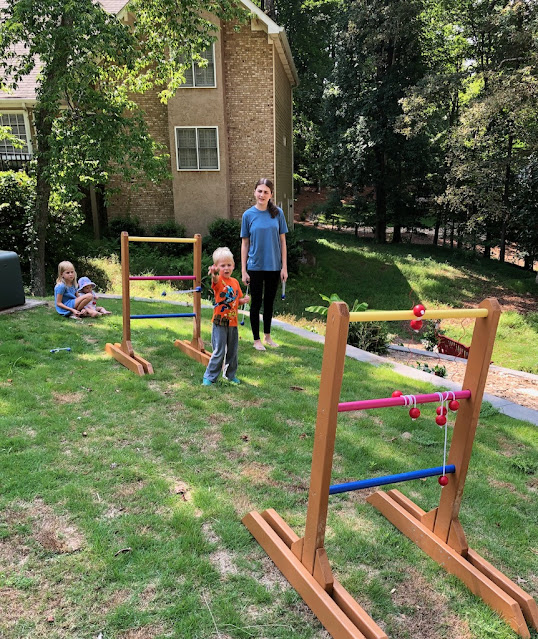 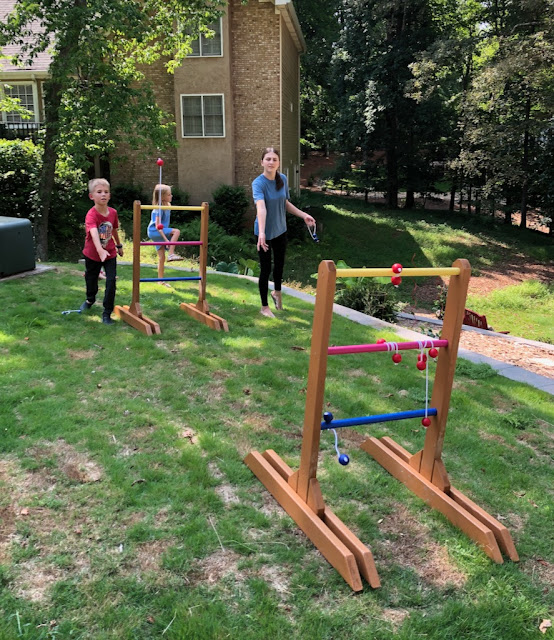 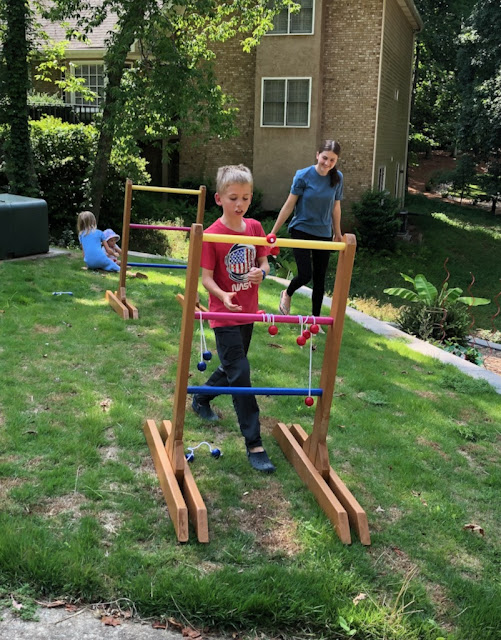 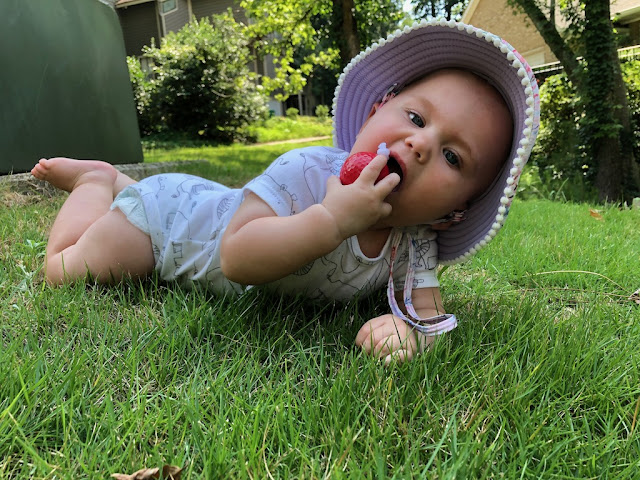 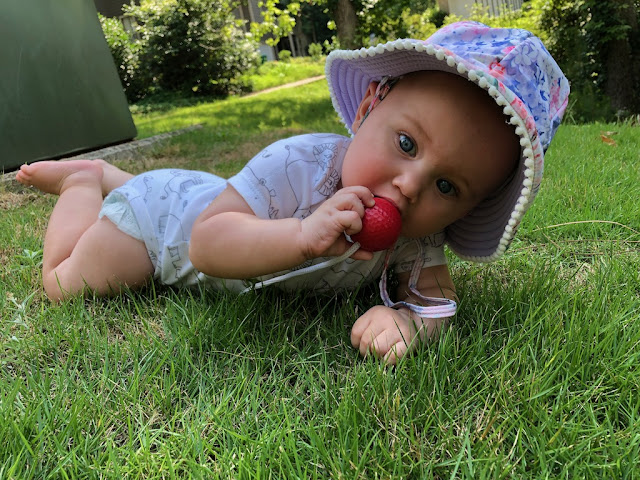 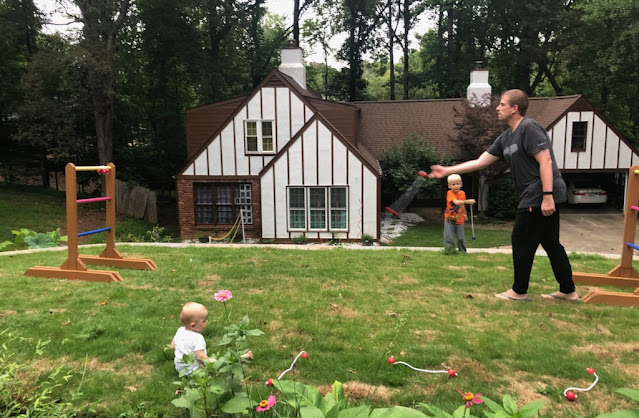 Andrew and Miriam are once again making it look like we have some sort of dress code or family uniform, but their choice in wardrobe was completely incidental (Andrew despises wearing matchy-matchy outfits). 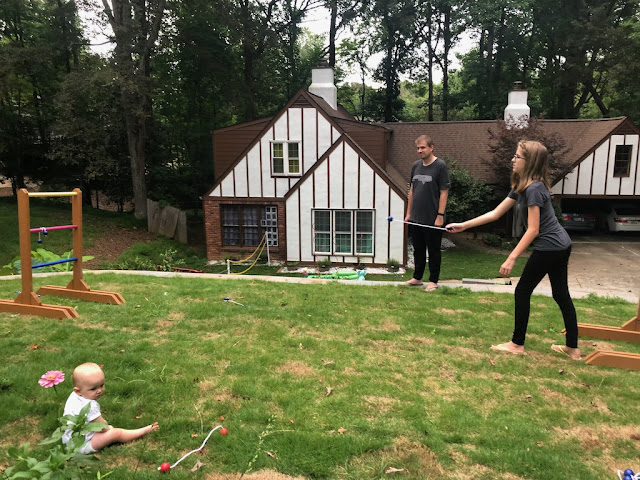 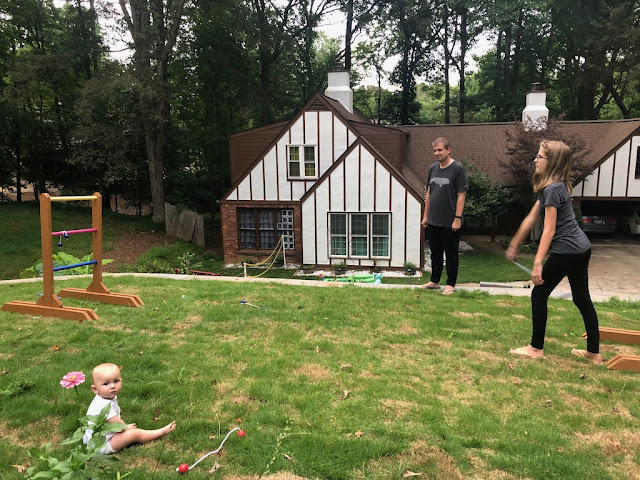 This last picture is just to show off my impeccable skills. See all those blue balls tied to the top rung of the ladder? Not to brag, but...those are mine. 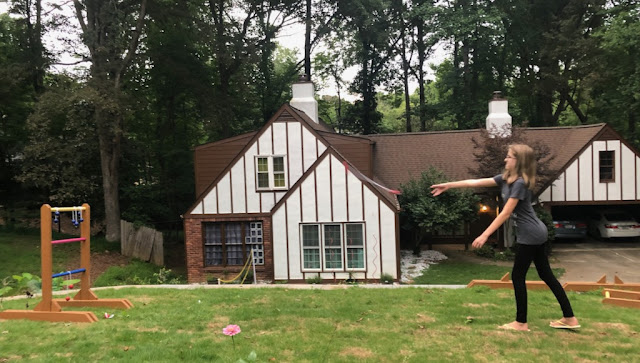 The evening was still pretty hot. Around bedtime, Andrew suggested we head inside for some snow cones to cool off before heading to bed. Everyone thought that sounded like a wonderful idea. And Benjamin and Grandpa showed up just as we were getting snow cone stuff out, so they got to have snow cones with us as well!
Tomorrow I'm hoping we can go to the pool—we haven't been for weeks!—and that should round out our drawn-out celebration: fireworks, sparklers, vaccinations, yard games. What could be better?
Posted by Nancy at 1:25 AM