Diana is anxiously waiting to make her appearance on the blog—a high honour! She's the brains behind this trip to Washington, D.C.
As far as I understand things, Michael had been planning on going to DC on a school trip but it was cancelled due to the pandemic and so Richard and Diana decided they'd just take Michael themselves. She wrote to us back in February to get the idea in our heads.

Hey y’all. Richard, Michael and I are flying to WA DC July 12-16.
We were having a discussion like, “Wouldn’t it be cool if Reid came and was our history buff during the trip?” Which then led to, “and maybe he’d come and bring Rachel, which would be cool for Michael to get to know her better, too.”

Reid was immediately on board. He likes history and it had been a few years since he'd been to DC.

I think it was me who suggested that Reid take Miriam as well as Rachel, because those three (second) cousins are all pretty close in age. 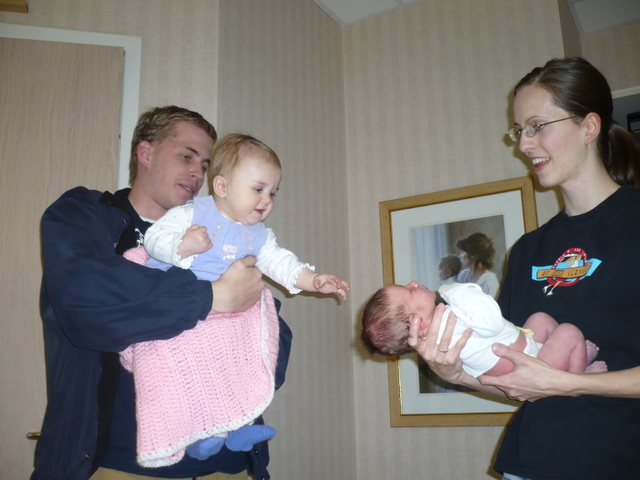 Miriam entered the scene in October 2009, but wouldn't meet Michael until July 2010 when we all camped at Grover together. I didn't capture a picture of those two together, but here's a picture of Rachel trying to give Michael a hug and Michael trying to squirm away from her: 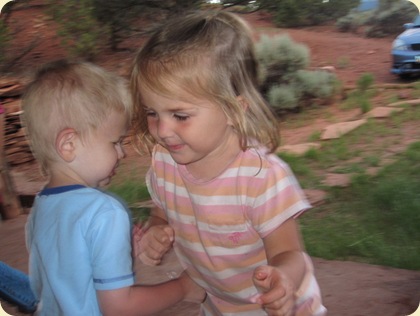 Really poor planning on our part.

Anyway, we've been together for a few smattering of things here and there. But, Diana was speaking quite truthfully when she said this would be a great opportunity for Michael and the girls to get know each other because we are very often not within even a couple thousand miles of each other!

So here are Michael and Rachel together again this time on the steps of the Lincoln Memorial (with the  reflection pond and Washington Monument behind them, of course): 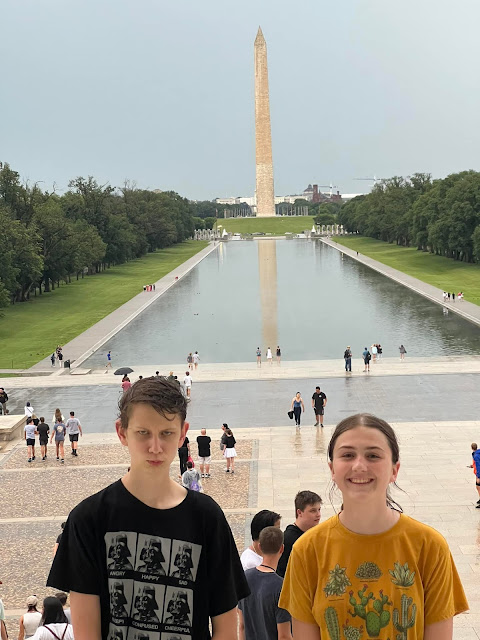 And I hear they're all having a great—hot, humid, rather wet—time together!

I'll post more of their stories in a bit (I have an email from Miriam and a few Facebook posts from Diana to pilfer from), but for now I'll share a few of our stories.

The first is that early this evening Rachel texted Andrew to ask for the password for the Amazon account so they could log on and watch a movie. I'm not sure what they decided to watch, and frankly didn't think much of it. They were tired from walking around all day, I'm sure, so if they wanted to kick their feet up, all the more power to them.

At home we were trying to usher the children into bed. They were a little bit quarrelsome this evening. They wanted to play Switch Sports after dinner, so we tried that, but they kept fighting over everything. So when the sky looked like it evidently wasn't going to rain on us after all, we went for a walk. But the kids fought the whole way around the block. Because it didn't rain it felt extra humid, so by the time we got home everyone was hot and sweaty. We sent the kids off to have a quick shower before getting on their pyjamas, and then they were supposed to help tidy up the main floor so we could send the vacuum around.

Quick tangent: When my sister and niece visited in February they joked that I needed a dog because of how much we have to sweep around here.

First of all, that is highly unlikely to ever occur. Second of all, they might eat food droppings, but what about all the dirt the kids track into the house. And then wouldn't the dog track extra dirt into the house? And what about shedding? I realize we have a cat but she honestly doesn't shed that much. Anyway...Andrew thought about it and then figured that with the cost of getting a dog and maintaining a dog we could just...get a little robot vacuum. So that's what he did! And it's been great!

Back to the main story: The kids came to help me finish cleaning up the music room (it's where our piano and organ are, hence the name). I gave them each an assignment.

"Zoë, can you take these books back upstairs and put them on the bookshelf. Alexander, find all the dirty socks—and pick up your pants as well. Benjamin..."

I can't remember what Benjamin's specific job was. But he had one.

All the kids left the room to do their jobs (which should have taken very little time) and just...didn't...ever...come...back.

This led me to make a house-wide broadcast.

Alexa made the announcement, the kids came scurrying back, and we quickly finished picking up the toys and throw pillows and whatever else was out of place before settling in for scripture study.

Evidently it interrupted their movie-viewing. I knew that it did that in our own house when we make announcements while the kids are on the TV...but I didn't know it would do that all the way in DC! 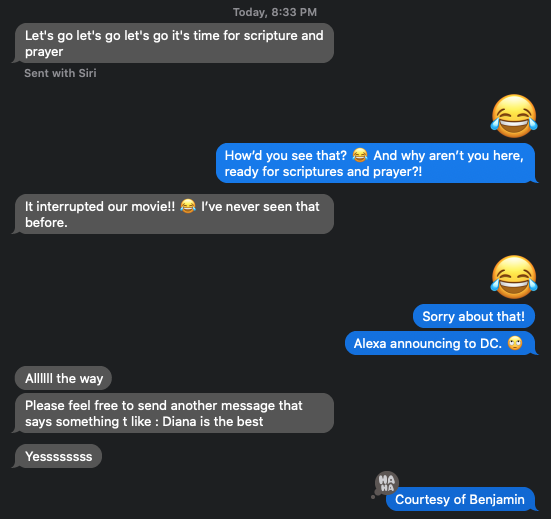 So then Diana joked that we should interrupt their movie with a flattering message about her, which Benjamin happily did. I think he said something like, "Diana is super awesome!"
It was pretty funny!
We worked on some scripture memorization this evening because we didn't feel like we had the time or the energy to pull out the scriptures for a full-on scripture reading session (note the time this incident occurred—8:33 PM!), and then Andrew asked Alexander to offer the prayer.
Alexander took this job very seriously.
"…and please bless Rachel and Miriam to be safe in DC," he said sweetly before dropping his voice into a passive-agressive grumble and adding, "and in the morning bless them to text me back with more than just 'phew…'"
He has been texting his sisters every chance he gets. He texts them long strings of emojis. He texts them selfies. He texts them gobbledygook. He texts them voice memos. He texts them his very best sounding-out writing. He texts them videos he's taken. He texts them...constantly.
They rarely text back.
I can hardly blame them because he sends about 100 messages before they even have a chance to respond. Here's a sampling...
His best sad-selfie (this shot took him several takes to perfect) underneath a crying emoji: 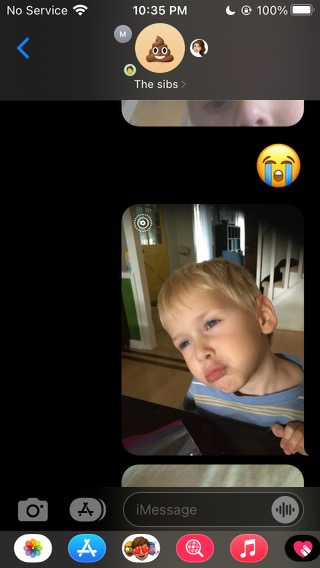 Crying emojis with "imisU" spelled out (translation: "I miss you!"): 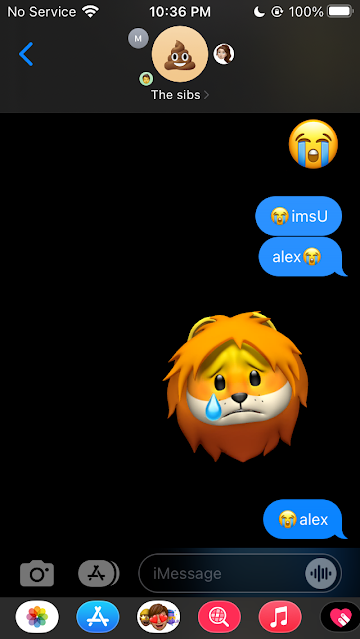 Finally a response from Miriam: 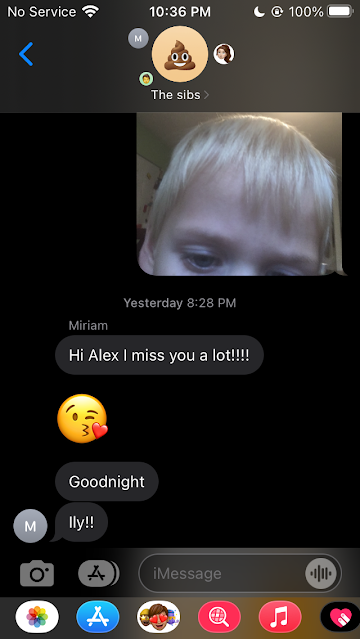 A string of emojis and what appears to be some very diligent efforts to spell the word "orange" for some unknown reason, plus a video of Alexander lamenting his sisters' absence: 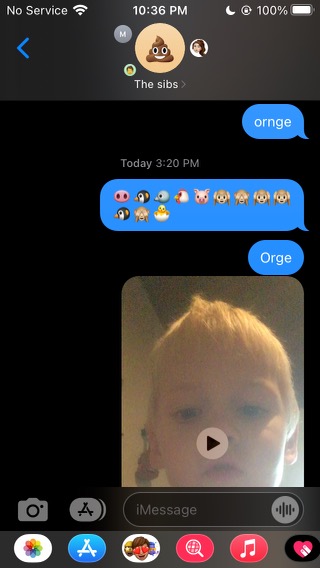 And this is where Alexander got the offensive "phew" from: 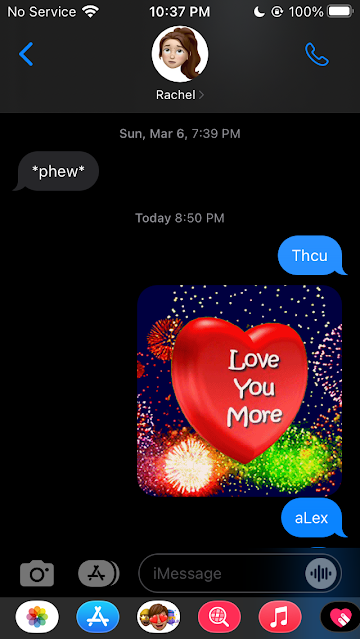 To be fair to Rachel, that "phew" is actually from March 6 (after another long chain of Alexander texts). But he understood that "phew" to be in response to his many, many recent texts (all of which are actually in the "sibs" group and not to Rachel, personally). Despite how offensively dismissive he found her "phew" to be, he was nonetheless grateful she took the time to text him back, and let her know with a little "Thcu" (thank you) note...as well as a GIF spitting fireworks, with a rotating heart that proclaims, "Love You More!" in case she was in any doubt about his affection for her.
All this is to say that the big girls are having a wonderful time in DC hanging out with their teenage cousin and seeing all there is to see in DC.
Also, Rachel, Miriam: if you're reading this...text Alexander back!
Posted by Nancy at 10:50 PM