Rachel and Miriam are working on narratives about their DC trip, so I'll hold off on posting any more pictures of them for the moment. They have some super fun pictures from their day at the spy museum, for example. (I was about to say that they had some darling pictures from the spy museum but because they (Rachel, Michael and Miriam) are a trio of teenagers, I figured "fun" would be a much more "hip" thing to say than "darling," but the pictures are absolutely darling).

Anyway, on Saturday evening Diana texted me to say that the flight she and Michael had been supposed to take had been cancelled, so they were stuck in DC for an extra day and were now routed to fly through Atlanta rather than having a non-stop flight to Salt Lake (where Richard and Diana's other kids were during this trip; Richard, on the other hand, flew straight home to Washington (state)).

They would have a five-hour layover at ATL, so...

They showed up at our house around 10:00 on Sunday morning. We'd just finished watching sacrament meeting and I hadn't told Rachel or Miriam that they were coming, so the girls were pretty surprised (I had to tell the younger kids because they demanded to know why they had to get changed out of their pyjamas; the girls were watching sacrament meeting downstairs on their own because they're having a little quarantine period, just in case).

Here's a picture of everyone together (sans moi): 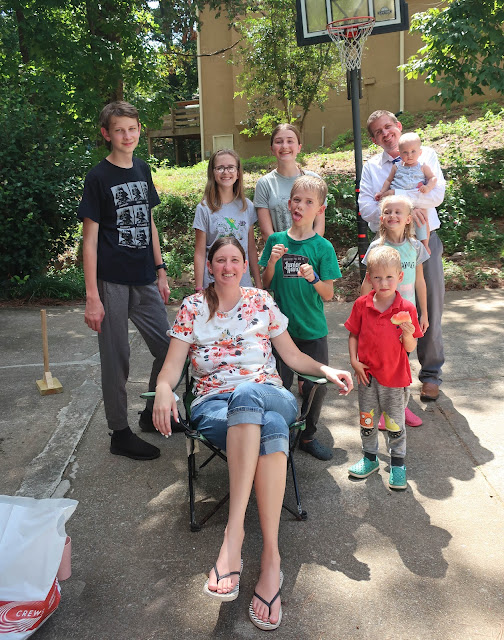 It was fun for the little ones to get to play with Michael. They showed him the backyard and even took him up the street to a friend's house to see the secret clubhouse they're building up there. Miriam made lemonade and we ate watermelon slices (which my kids were excited about because they "never" get to do that (I always cut the rind off and cube the pieces)). 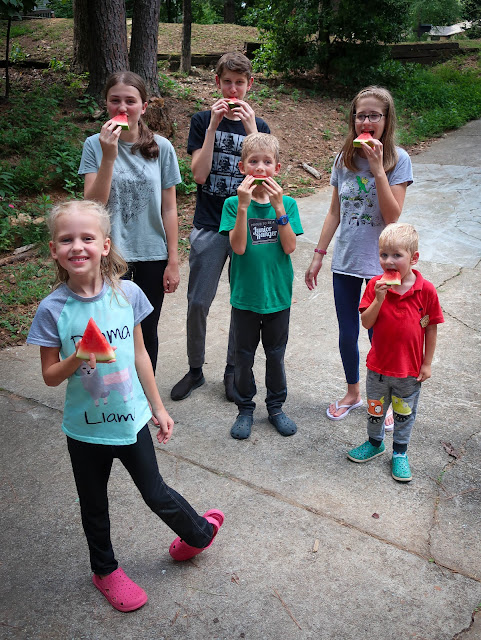 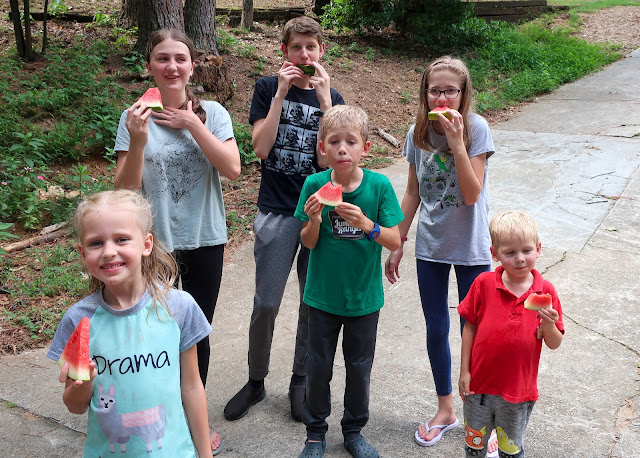 Even though it was hot and humid, the kids ran around like hooligans. They jumped on the trampoline and played basketball and all ended up dripping with sweat. 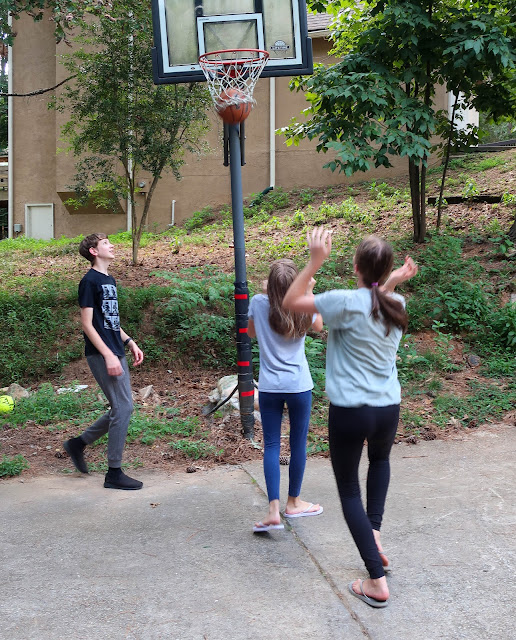 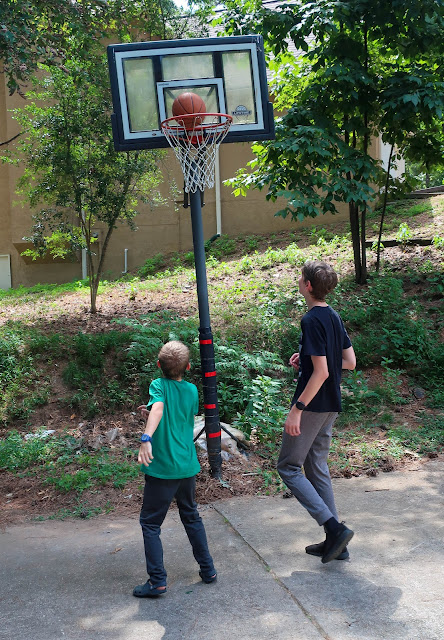 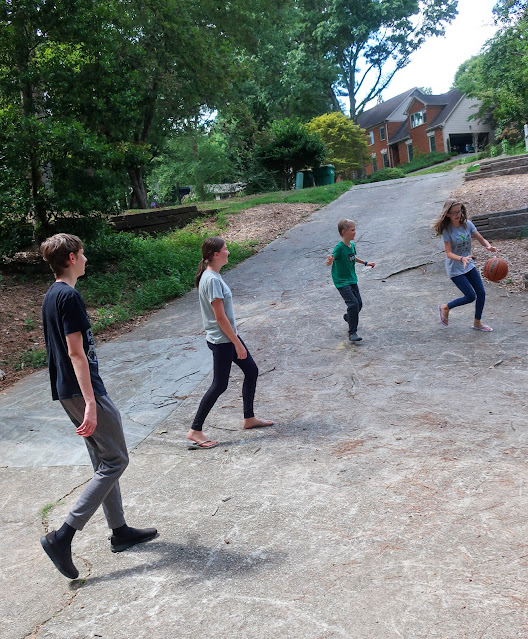 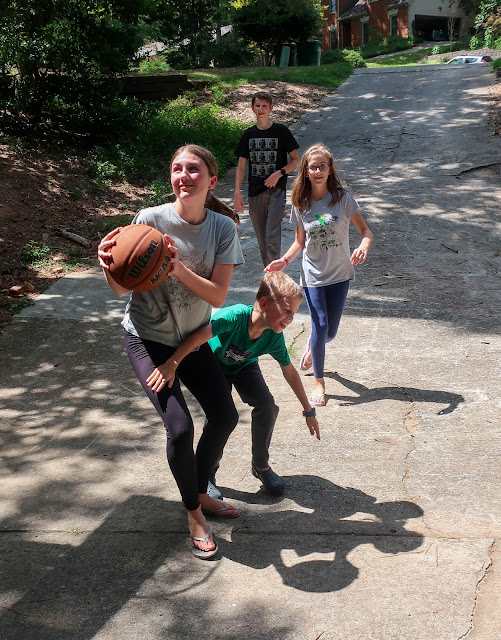 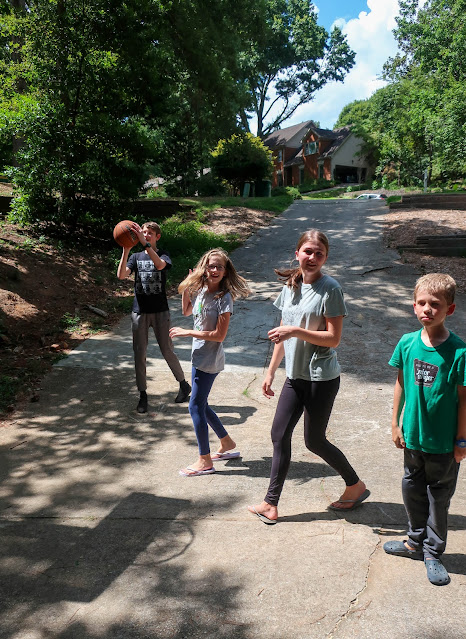 Poor Alexander introduced a soccer ball to the mix, instigating a chaotic game of "sasketball" (as Benjamin called it). Unfortunately, he slipped while trying to get the soccer ball and landed flat on his back, bonking his cute little noggin. So, here are some pictures of Diana and me with Phoebe and Alexander and his ice pack... 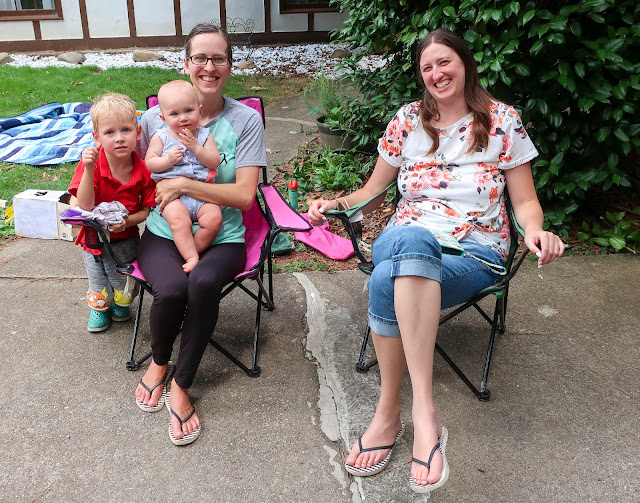 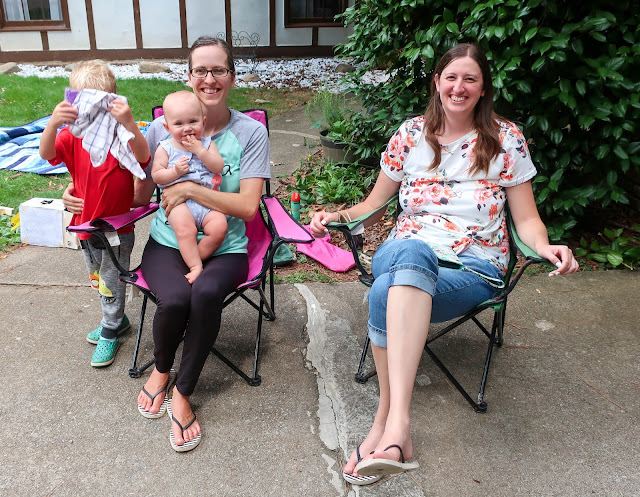 Did you notice our shoes? We have the very same flip flops on! What are the odds?
Probably pretty high, truthfully. Old Navy only has so many options.
Anyway, it was so fun to get to have Michael and Diana visit! My girls often bemoan the fact that there are no cousins their age, and that's true...but that's also what second cousins are for! And as far as second cousins go, Michael is a pretty great one!
Thanks for stopping by! 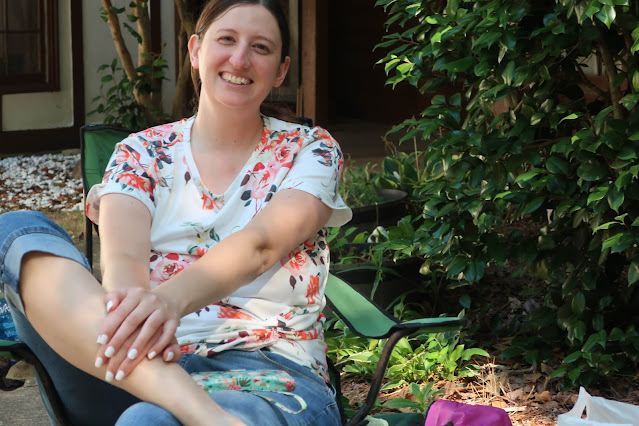 (This is a picture Benjamin took of Diana; it turned out simply darling. I can say that because Diana's not a teenager.)
Posted by Nancy at 3:20 PM