Hearth seems like such an antiquated term, and yet our home has two hearths without me fully realizing it. I always call our hearths "the fireplace ledges," as in, "Oh, no! The baby is climbing on the fireplace ledge!" because that's what Phoebe did today.

July 4 found her fussing at the base of the stairs because she couldn't follow Zoë and Alexander up. 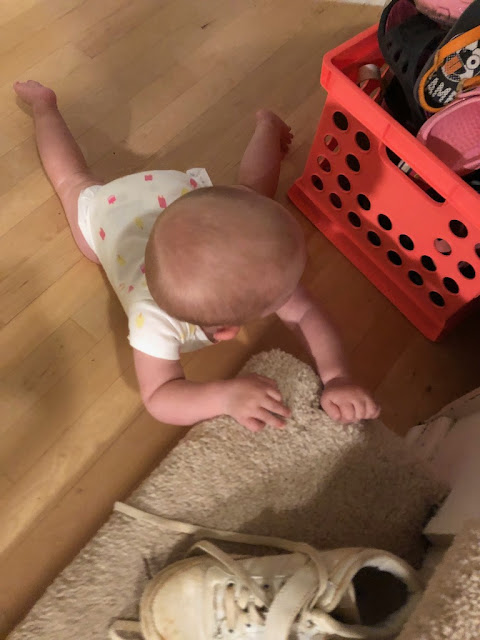 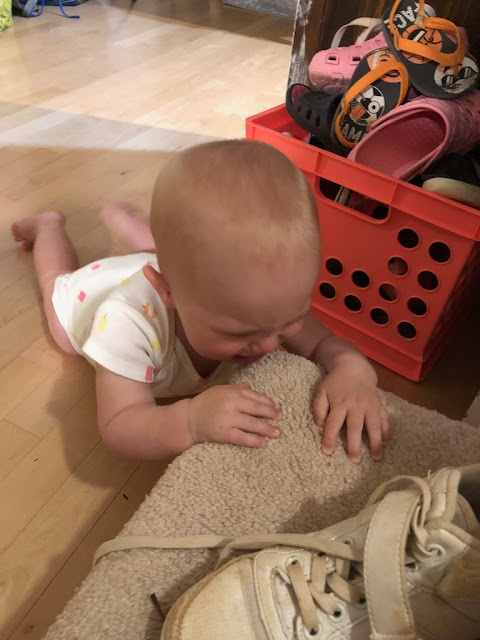 This morning? Here she is pulling herself up on the stairs. 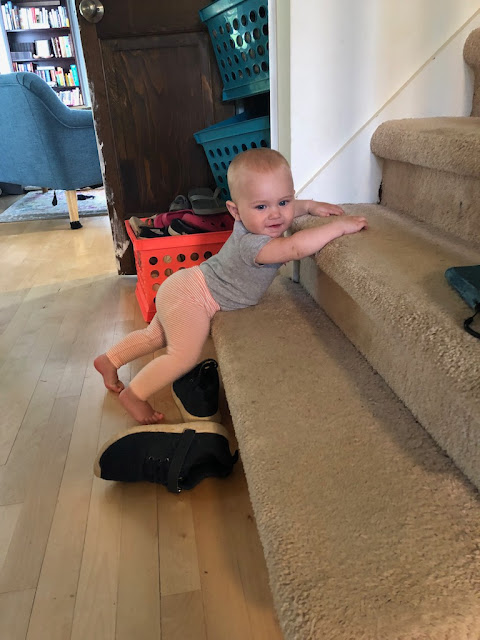 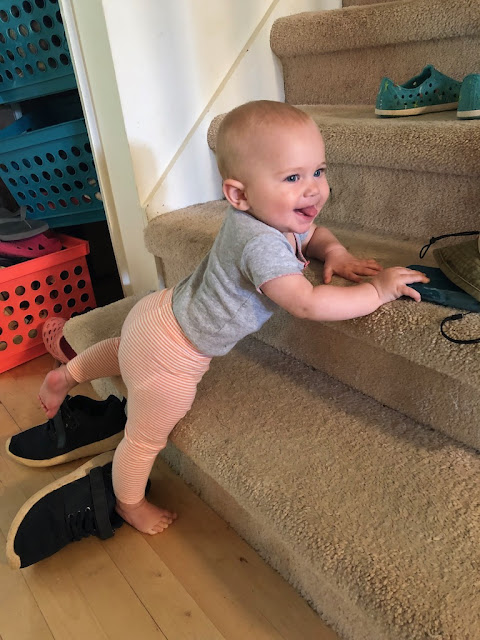 With her tongue waggling around, of course. 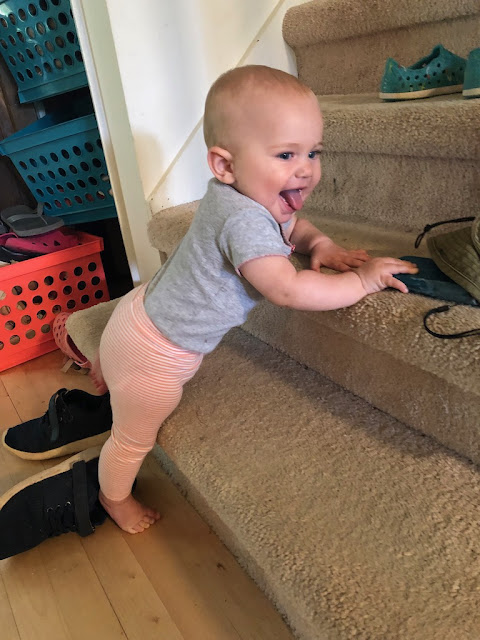 July 11 found her just pulling herself up to a very wobbly stand at the...uhhh...hearth: 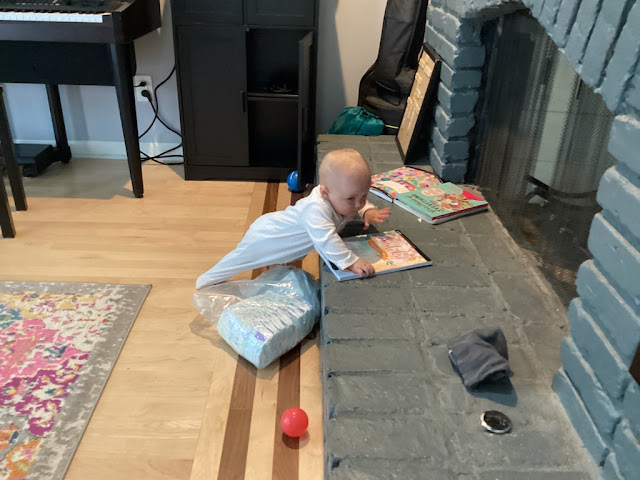 There's no stopping her!
I don't know where we're going to put things that we don't want her to get anymore. We'll have to actually put them away instead of moving them from the floor to the fireplace ledge hearth. Oh, the inhumanity!

(You'll notice, of course, that she's ignoring all the toys and is headed straight for that pile of books.)
*****
I had no title for this post until, naturally, I thought of one. And the title that I thought of has me thinking I should share a story about Zoë, who recently watched Jurassic Park with her grandfather.
Now, I was not entirely on board with this idea. But that's because I'm a wimp about scary movies. Some people like being scared, however, and Zoë and Daddy and Grandpa and Rachel and Miriam, and Benjamin all felt like Zoë could handle it. So I said, "Fine. Whatever."
Like, if it's too scary for her then I guess she'll learn about what scares her.
So she had a special movie night with Grandpa. While he was packing her up to drive home, the rest of us left for our evening stroll, so by the time they got to our house...no one was there.
Evidently Grandpa made a remark about how perhaps we'd been eaten by dinosaurs.
He knew we were only on a walk, however, so he drove around the block and found us and by the time he did, Zoë's eyes were quite misty.
We asked her if the movie was scary. She said it was "a little" scary, but not a whole lot.
We asked her why she was crying. She said she was not crying.
We told her that her eyes were red. She said that was ridiculous.
We thanking Grandpa for having her and bid him farewell.
That's when Zoë told us that Grandpa had told her that we had been eaten by dinosaurs and that that idea had scared her more than the whole movie did and so that was the reason her eyes were a little tear-filled.
"And you believed him?" I asked.
"Of course I believed him!" she said.
"But he's such a jokester!"
"But he said it so seriously, like he really believed it, too."
Sure he did. But he was 100% kidding.
When the big kids caught up with us (somehow they wound up doing the whole "loop" while Andrew and I just did "The Hobbit Walk" (I think because it was going to rain—and these southern storms whip up fast!)) we told the story to them as well.
When the idea came up that Zoë had fallen for such a joke, she insisted it was never a joke at all, but that Grandpa thought it was a plausible explanation for our empty house.
"We believed it equally," she insisted, with great dignity.
It was rather hilarious...and brought back fond (?) memories of my sister Abra telling me that my brother and dad were late coming home from watching Jurassic Park in the theater because they had actually gone to the park and were probably eaten by dinosaurs. Oh, how I cried!
I was a rather gullible kid.
Posted by Nancy at 1:48 AM