Today I feel like it might just be possible to re-enter the typical school-year world.
I lugged our little jungle gym upstairs (it used to be in the LEGO room, which is obviously full of choking hazards and not a good place for a baby) and set it in the middle of my bedroom so that Phoebe can pull herself up and learn how to be a little monkey beside me while I work.
She's still a little small for it but has been enjoying pulling up to stand beside it while watching Alexander and Zoë climb all over (bringing it upstairs, of course, elicited a renewed love for this play thing). It worked out well. It was noisy, but it worked out well. I edited a paper for my mom, wrote a cover letter for a submission of my own, and whittled another paper down from 9706 words to 7993!
I also repaired the handlebar brakes on Miriam's old bike, which I was going to post to my buy-nothing group to get rid of now that Miriam is riding Rachel's old bike...but then I realized Zoë might fit it...so instead of giving it away I finally fixed the brakes!
I'd tried half-heartedly to fix them before but was too afraid to actually try, you know, so I didn't try very hard. Besides, they also had back-pedal brakes and those worked just fine so it wasn't as if the bike was unsafe. But Grandpa lives here now and he knows about 5000 times more about bikes than I do, so I figured that if I screwed something up doing a very basic fix like this that he could at least help me fix my fixing. But, I successfully fixed the brakes (the tutorial called it an "adjustment," as if they weren't really even "broken," but I'll keep saying "fixed" because it makes me feel like I did something slightly more important than a simple "adjustment").
Now Zoë's zooming around on the bigger bike and we have no need of her smaller bike, because I picked up an even smaller bike for Alexander on the same buy-nothing group. And I don't even mind giving up her bike because I have seen so many bikes change hands since joining the buy-nothing group that I'm confident that when we need a bike that size we'll be able to find one.
Even if we can't, we don't have unlimited space in our garage to store bikes, so...something's gotta go.
Here she is getting all panicky because what you can't see in this picture is that a car is coming down the hill towards her and she just knows it's headed straight for our driveway—because it's Daddy's car—and she needs to get to safety before the car hits her! 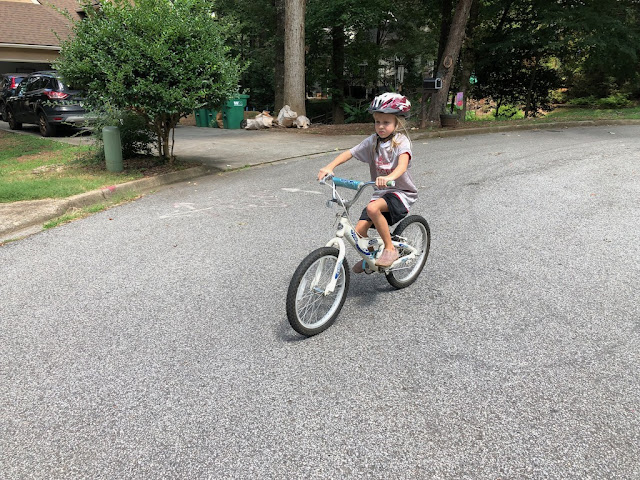 I was like, "Wow. Relax. Daddy saw us. He slowed down. He waved. He's not going to hit you. Look. He's stopping. He's rolling down his window to talk to us."
Sheesh. I'm raising a bunch of panicky people. I have no idea where they get their anxiety from. It's weird.
(I know Zoë's seat needs to be raised up a bit; I'll convince her of that once she's more comfortable with her new ride).
Here's Alexander on his bike: 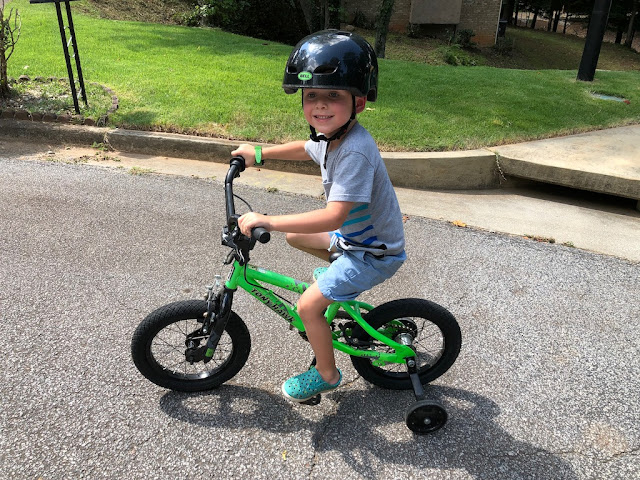 He's squeaking through his teeth: "Get away from the car, Mom. It's not safe!"
It is literally your father! The car is parked!
Alexander has been rather panicky lately, too. First of all, it's his turn with whatever Benjamin and Zoë (and Grandpa) had, so I'm sure that's not helping things. He just spiked a fever this afternoon, but I'm sure it affected his earlier weepy, panicky behaviour. Second of all, we've had a lot of thunderstorms lately and he hates thunderstorms.
Last night the kids (Benjamin, Zoë and Alexander) all went to sleep in the pop-up tent in the boys' room. Alexander fell asleep, but Zoë decided she couldn't get comfortable and moved into her own bed. I guess Benjamin made a similar call at some point in the night, because sometime in the middle of the dark and stormy night, Alexander woke up, stumbled into the hallway, and stood there howling.
"What is wrong?!" I asked him, quickly shushing him before he could wake up his little sister.
"Have you ever woken up in a storm, in the dark, in a tent, all alone when everyone was supposed to be sleeping with you in the tent is gone?!" he explained, his quavering voice gathering gusto with every word.

"Oh. Did Benny leave to sleep in his bed, too?"
"Yeah!"
"Sounds awful to wake up that way. You still seem pretty tired. Can I tuck you back into bed?"

"Yeah."
"Would you like to be tucked into bed in the tent? Or in your bed?"
"Just in my bed. I can't sleep in the tent alone!"
As a reminder, the tent was set up in his bedroom. It's not like they abandoned him in the middle of the woods somewhere. They abandoned him two feet away from his actual bed. Had the thunder not been so thunderously loud, he probably wouldn't have ever known he'd been abandoned.
It was bad enough to knock of an inconsequential tree in our backyard (inconsequential because...it happened to just not squash anything when it fell; it was a pretty substantial tree, just dead and rotted out (all the limbs had fallen off already) and ready to return to mother earth).
We had another thunderstorm this afternoon.
Rachel was preparing dinner for us (she's approached our no-oven situation as a challenge and made a wonderful taco soup in the InstantPot,* as well as a no-bake cheesecake for dessert) and she asked if I could fetch some chicken for her from the freezer outside.
I'm an excellent gofer, so I headed through the TV room—where Alexander was sitting on the couch, all cuddled up (and starting to feel sick), playing Minecraft on the iPad—to get to the garage. No sooner had I touched the doorknob than Alexander's sweet voice called out, "Mommy, it's thunderstorming! Don't go outside!"
"I'm just getting something out of the freezer," I assured him.

"Don't get struck by lightning, please!"
"I'll do my best."
"K, thanks."
He's terrified of thunderstorms and I'm not really sure how to help him. One morning not too long ago he woke up just after or during a thunderstorm and was all upset because he hadn't had time to check the weather in time to make a checklist and prepare his thunderfort. He is obsessed with checking the weather. He can tell you the weather anywhere in the world! He just scrolls around the weather app looking at the weather...everywhere.
"THUNDER BAY!" I heard him yell randomly. "That's gotta be real bad!"
"Thunder Bay's not a kind of weather," I explained. "That's a city in Ontario."
"Can't move there! THUNDER BAY!"
We have no plans to move to Thunder Bay. And I'd honestly be more concerned about the polar bears than thunder at Thunder Bay.
The kids have been watching a show called Something Bit Me! I'm sure this has not fueled their anxiety at all. There have been several polar bear episodes. And by several I mean...like...two? Maybe? I don't know. Anyway, my mention of polar bears unleashed all of Benjamin's knowledge about surviving polar bear attacks (basically there's no way unless someone steps in to rescue you, so good luck).
Later at the dinner table he mentioned something about "Canadized bees."
"Canadized?" we asked.
"Yeah!" he said. "Where mom's from? Canada."
"Do you mean Africanized?"
So, he's worried about killer bees, polar bears, thunder, and cars.
Of that list, cars is probably the thing he should be worried about most.
* Alexander likes the InstantPot because there are food buttons on it where you can just push it and get food. "Like, if you want yogurt, you just push the yogurt button and...BOOM...yogurt!" he explained. You should have seen his little spirit get crushed when I explained that we do push the yogurt button, but first we have to add milk and active cultures and...it's kind of this whole process. He was like, "Wut?"
Posted by Nancy at 2:16 AM