July was a difficult month for reasons that I can't seem to put my finger on.

We inched our way out of quarantine, but have spent two more weeks being sick with other things. The girls went to DC and I taught Benjamin and Zoë cursive. Alexander got a pedal bike. Phoebe only slept for half an hour at a time for several weeks (but is doing hour+ long chunks these days). I managed to read one book from cover to cover and can't fathom how I ever managed to be a mom and work and go to school.

I have about two more weeks to pull myself together before I dive back in again.

Today I had the children write about possible outcomes of immortality (as part of our discussion about Tuck Everlasting). Benjamin's list was particularly interesting. 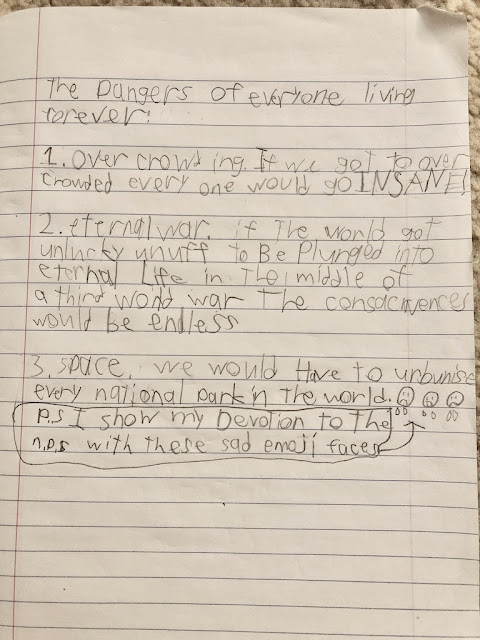 The Dangers of everyone living forever:
1. Overcrowding. If we got to overcrowded every one would go INSANE!
2. eternal war. if the world got unlucky unuff to be plunged into eternal life in the middle of a third world war the consacwences would be endless
3. space: we would have to urbunise every national park in the world. :( :( :(
P.S. I show my devotion to the N.P.S. with these sad emoji faces.
Trust me, we're working on spelling. The thing is that Benjamin can't think about how to spell thing and think about what he wants to say. If I were to give him a pop quiz on spelling tomorrow, however, he would definitely spell "enough" much more accurately than he did here.
His penmanship is atrocious here, but he's still sick and wrote this in bed, so we'll give him a pass.
Also, it's highly likely he'll simply have messy handwriting forever.
And that's probably okay. I mean, Andrew's doing okay in life and his handwriting...eek.
Anyway, it was his "devotion to the NPS" that got me with this writing. Never have I met a young boy so fixated on a career. Though he still has plenty of time to alter his course!
Today Miriam announced to her beaming-with-pride father that she wants to be a data scientist when she grows up. Apparently making pretty graphs brings her immense joy and she's been loving learning how to code. She's cooking up a final project that combines her passion for music with her newfound passion of data science, so stay tuned!
And here are a couple of pictures of Phoebe enjoying her favourite things for you to enjoy. First, here she is getting into the cat's food (and you should see how melodramatically Waffelles turns up her nose at her food dish when she smells evidence of Phoebe about it): 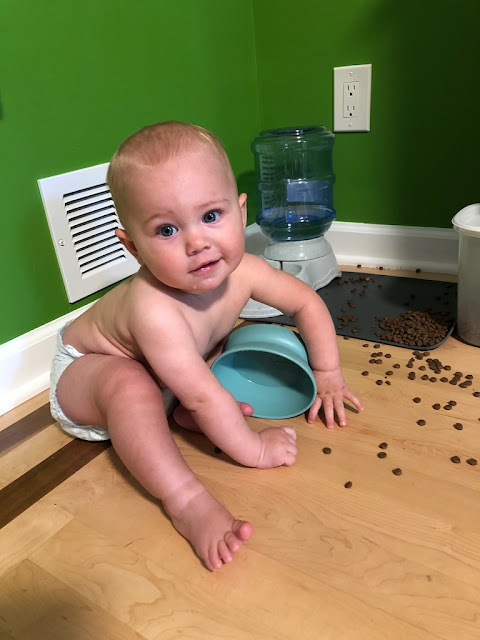 And here's Phoebe standing up against the little recliner (she pulls up on everything these days): 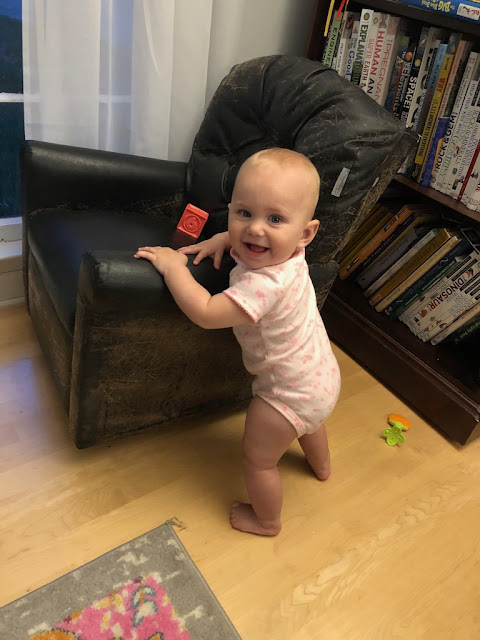