This afternoon around 2:00, I looked at the time and then looked at Rachel, patted her on the cheek, and said, "Oh, wow! At this exact time fifteen years ago I was...at work."
"Really?!" she gasped. "What did you do with me?!"
"Uhhh..." I said, miming a large pregnant belly. "I just took you with me."
"Oh," she said. "Right. That makes sense."
Technically 2:00 was around the time I left work. It was my very last day, because I'd so brazenly decided to simply work right up until my due date because what could possibly happen otherwise? Babies always cooperate with our best laid plans.
In this case, Rachel really did cooperate quite well. She only made me miss the last 1.5 hours or so of my work week. Silly girl.
I had her in my arms shortly after 5:00.
And now she's 15. And that's wild to think about. This evening I told her, "You know, I was fifteen when I met your father..." and she about panicked, though it's the absolute truth.
And it's hard to believe that she's fifteen now.
Somehow Andrew and I managed to raise an entire person for fifteen solid years. She went from a helpless mewling infant to a babbling toddler to a lisping child to this person-sized teenager who begs for me to sign her up for college courses. And I'd like to know how that happened, exactly, because I was watching the whole time and I never really caught her in the act of growing up.
Somehow growth is both imperceptibly slow and happens way too fast.
But today isn't really about my parental existential crisis, is it? It's about Rachel's birthday, which was really quite boring. We did schoolwork all day. That's the scoop.
Eventually I hope we'll get back to the pool, but honestly...I don't know. We missed out on several weeks due to having COVID and then last week 3/4 of my little kids had the trots and then this week Zoë has been sick with not-COVID. But eventually we'll get to the pool again. Or do...anything.
I suppose Rachel just got back from DC, so she's not really hurting for adventure.
I'm the one feeling homebound. But, again, this post is not about me. It's about Rachel, who got to go to DC the week before her birthday. And then got to spend her birthday doing schoolwork. But that's not unusual for her since many of her public school days were spent at a year-round institution. That particular school started on Monday, so she would have had school on her birthday had she still been enrolled in that school (which she wouldn't have been even if we'd stayed in North Carolina, even if we hadn't started homeschooling...because she's in high school now). One year the first day of school was on her actual birthday!
Anyway...
Rachel.
She did some schoolwork. And then we had dinner. Grandpa came over and we let Zoë out of her room. They're both still a little sick but it's been days of symptoms for each of them and they've had zero positive COVID tests, so we just stuck them on the same side of the table, over by the air purifier. They're just about better, anyway.
Andrew and Miriam made a wonderful dinner of orange chicken, fried rice, and spicy green beans.
Then we opened presents.
Benjamin has begun gifting each of his siblings a personalized LEGO set for their birthdays and I think it's the most fabulous idea. He builds a creation, then deconstructs it, and then reconstructs it while drawing step-by-step illustrations, which he compiles into an instruction manual. Rachel got a pirate ship! 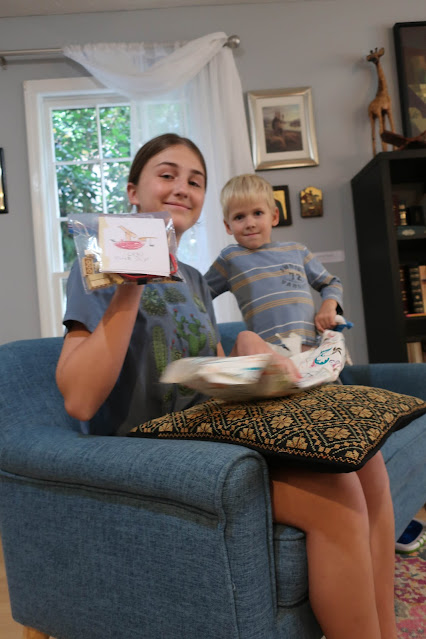 Here's Rachel with her new "WORLD'S BEST BOSS" mug from The Office: 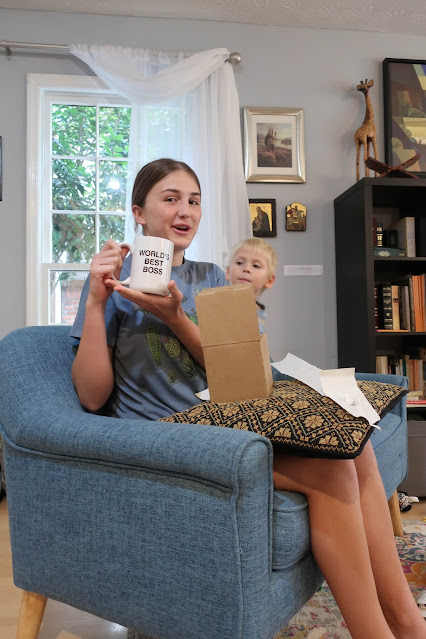 Here's Phoebe playing with the air purifier (I meant to crop this picture to eliminate some of our mess, but...then I didn't...so whatever; also, she later climbed onto the fireplace and then reached over so she was resting her torso on the air purifier, making a little bridge of sorts between the fireplace and the purifier (I came running when I heard her squawking and was like, "Wowzers! You're right to squawk! That's a terribly dangerous position to be in!"): Here's Miriam excitedly standing over Rachel's shoulder as she unwrapped a present containing some The Office socks and a copy of The Office BFFs: 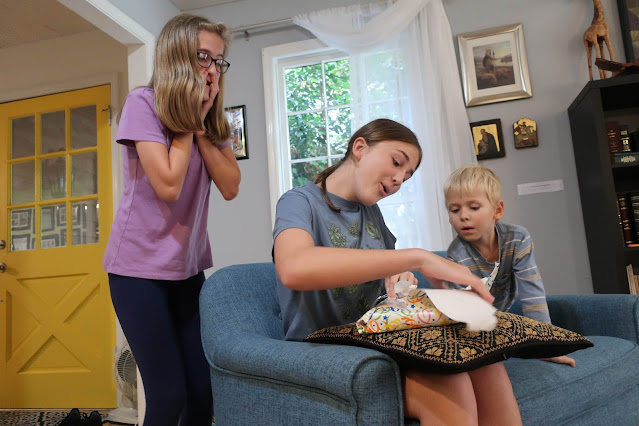 Miriam helped me wrap Rachel's gifts earlier today so she knew what was in them and is rather excited to also get to read The Office BFFs. 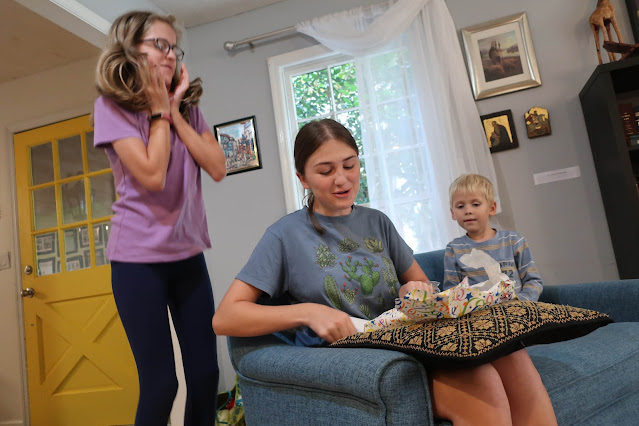 She got a few other books, a healthy sum of money from Naanii and Auntie K, and...a new bike from Grandpa (and us, and which Grandpa has been hiding in his house the last couple of weeks after constructing it in his living room): 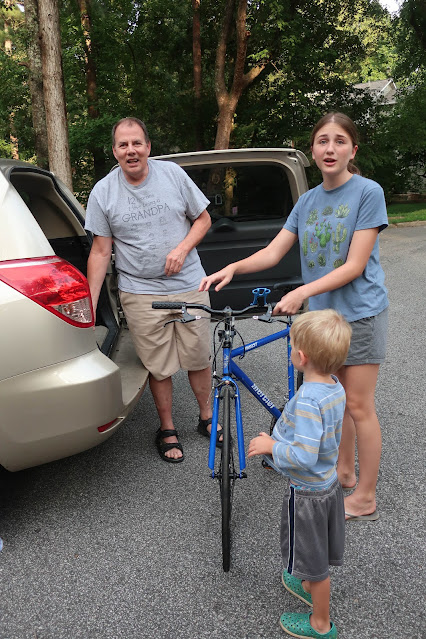 Auntie K also sent this lovely little wallet card (oh, and we checked the mail while we were up getting the bike out of Grandpa's car and found that the The Office t-shirt that hadn't arrived in time to be wrapped had been delivered at some point in the day, so Rachel got a t-shirt as well). 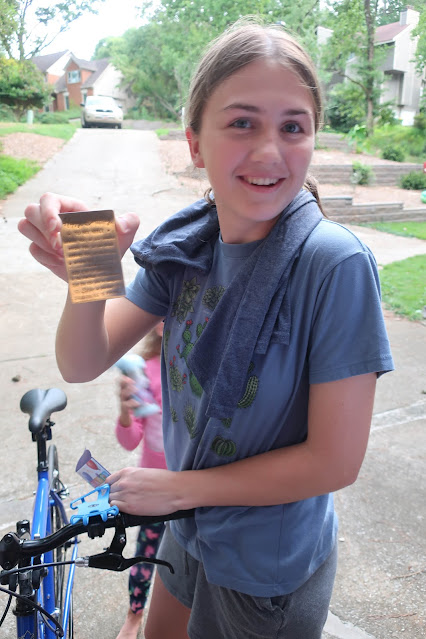 Andrew was the mastermind behind her birthday this year. He ordered her gifts, and made her meal of choice, and also made her birthday cake because I just couldn't this year. And, phew, that's why teamwork is a thing, right?
Today I was wondering what people do when they feel like they just can't even make a birthday cake.
It was weird thought (and, again, this post is not about me—it's about Rachel—but also, it's about me because I've got nothing to offer other than the thoughts clunking around inside my own head), but I just couldn't help thinking it today. Like, what do people do when they need a birthday cake but they're just too overwhelmed to make one (for no good reason, other than life sometimes feels that way)?
I'm embarrassed how long it took me to come up with the answer: they buy one.
Like, pretty sure you can pick up a cake at Wal-Mart for $10.
They buy a cake.
Duh.
But Andrew rallied his baking skills and made Rachel a cake from scratch. He baked one large sheet cake and then, because we don't have cake cutters (like cookie cutters, but for cake) he placed a plate on the cake and traced around it with a knife, making three perfectly round layers.
He made a delectable raspberry filling and flavoured his frosting with real vanilla bean.
So, basically what I'm saying is that he went through way more effort to make a delicious cake than I would have had I been the one in charge of the project (even at my most energetic).
He kept his design to a minimum, following the example Dwight (from The Office):
Rachel loved it! 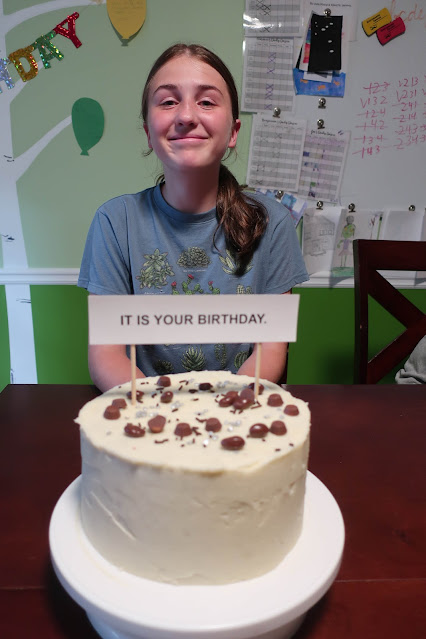 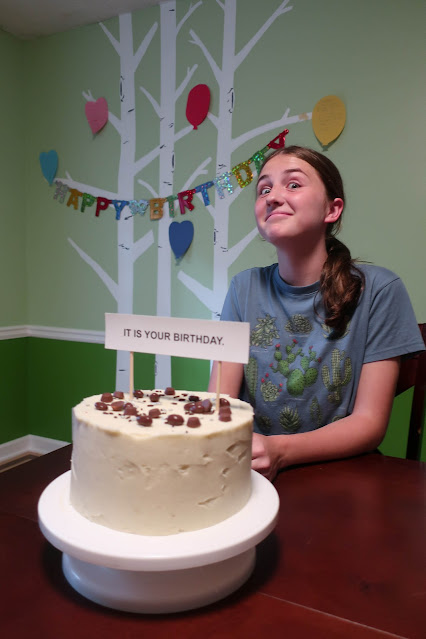 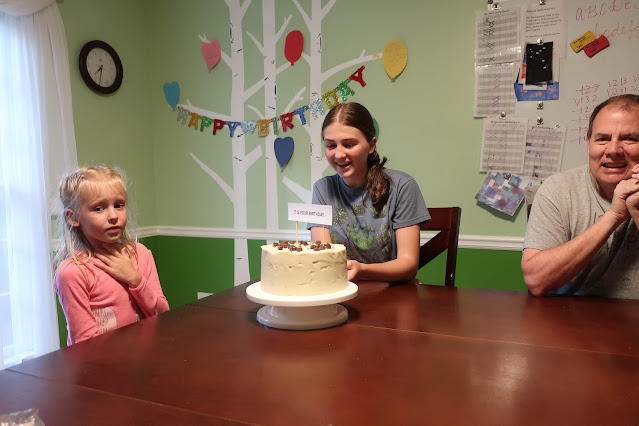 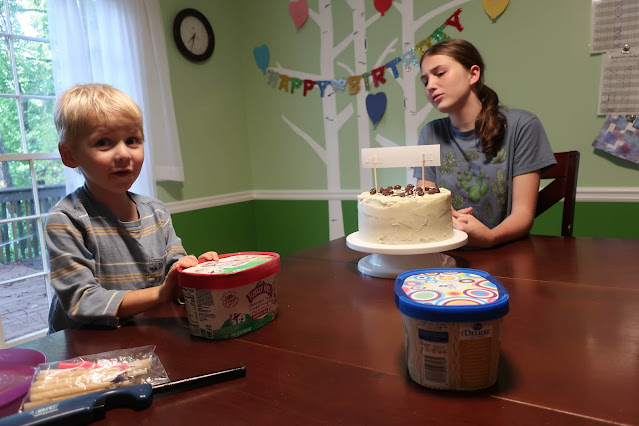 Here's Andrew feeling rather unsure about having loaded so many candles onto Rachel's birthday cake: 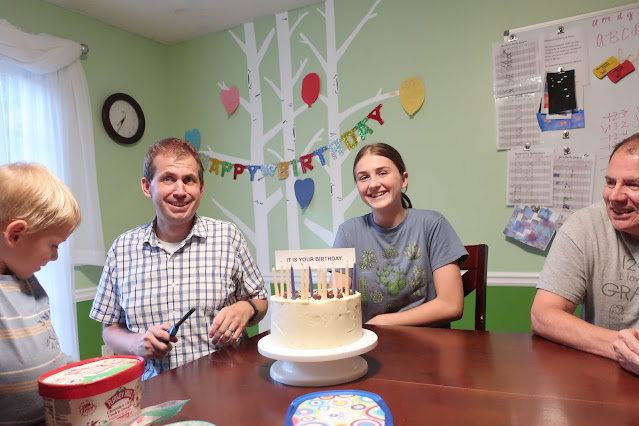 Honestly, we weren't sure we'd even have enough! She's getting old! 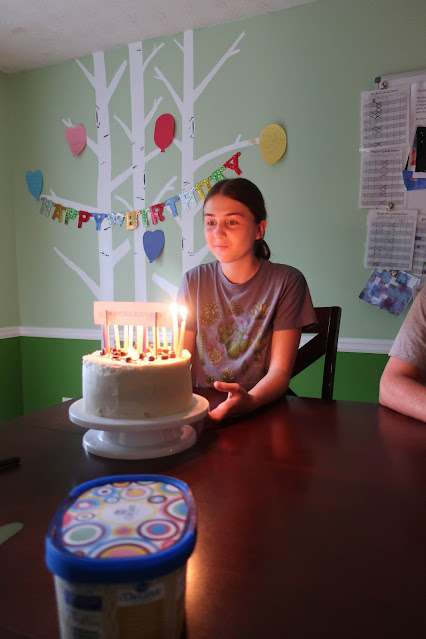 The fire was mesmerizing! 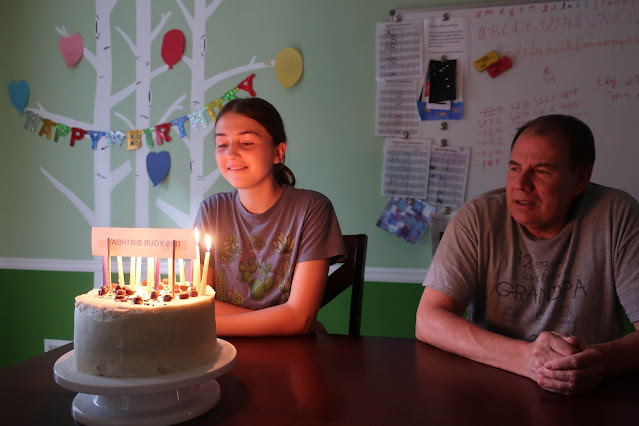 Benjamin grabbed the camera and took a few pictures of the cat and the cake (two very important things; he'd like to learn more about photography and we'd like to make that happen for him but he can sometimes be a little...negligent...with things so...giving him free reign of a camera is a terrifying ($$$) prospect): 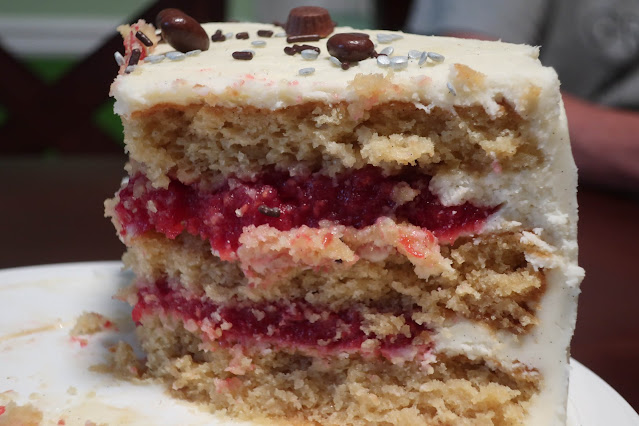 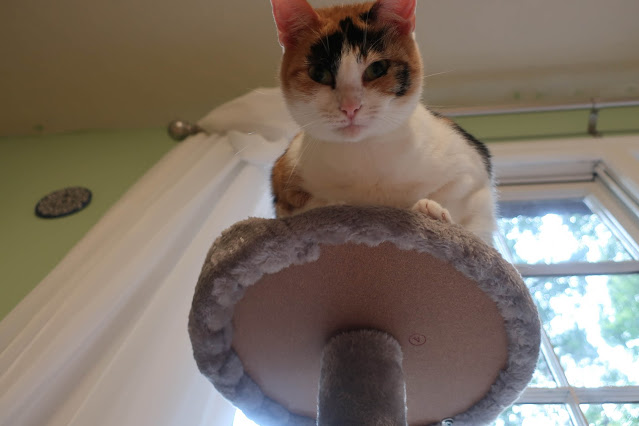