One reason I was nervous about sending the girls to DC was because, well, we're in the middle of a big wave (of COVID, in case we ever get so removed from this situation that this will need to be clarified for future readers; one can hope). We still haven't done much or gone many places and DC is a bustling city teeming with human vectors. But I also felt like I can't take everything away from my kids. And they felt like the risks were worth it to meet up with Michael. And I did annoying things like ask that the plane riders in our group wear masks on the plane...and forbid that my children should dine indoors (good thing food trucks are plentiful in DC)...and insist that my children wear masks indoors...and send a HEPA filter with my girls...and...and...and...

We did what we could to make it as less risky as possible. But naturally there were still risks.

So when Grandpa told us that he was up coughing all night on Sunday, we began to feel a little worried.

Already we'd mostly confined Rachel and Miriam to the basement. But when we got word of Grandpa's cough we got a little stricter about their period of confinement. They've been wearing masks whenever they come upstairs and have been taking their meals downstairs and so forth, we've got air purifiers set up around the house.

Zoë woke up with a fever around 2 AM last night. And then she just...stayed up...the rest of the night. And I mostly did, too, between running to check on her and getting up with Phoebe and just having my mind spiral with stories of doom and despair. It was a busy night! And then there was a big storm around 6:00 this morning, which Zoë was remarkably calm about.

I'll have to share some of our text messages back and forth. She's a hilarious texter.

Anyway, eventually I fell asleep until around 8:30 AM, when Phoebe and Alexander woke up. We were making our way downstairs together to get some breakfast (and to fetch some breakfast for Zoë, who has been taking her meals in her room today) when I looked out the front door window and noticed a little brown orb scooching around the front porch.

It was a little box turtle! 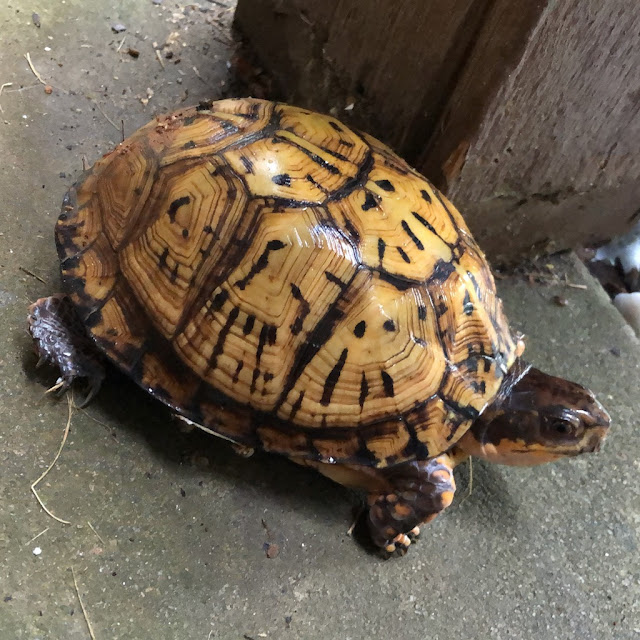 We went outside to observe it... 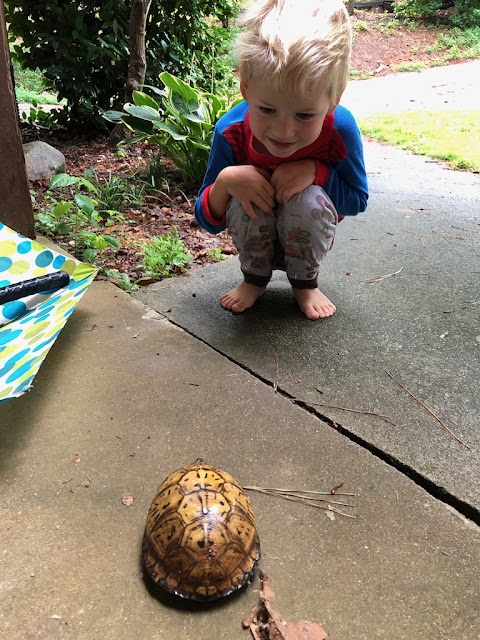 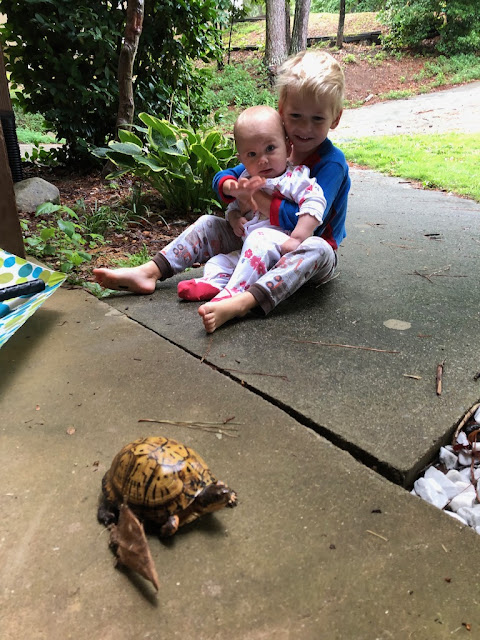 But then I thought Zoë might want to see the turtle, too, so I found a container, set it on its side in front of the turtle and...it waltzed right inside...and then we brought it inside for further observation.
As I suspected, seeing the turtle cheered Zoë considerably. 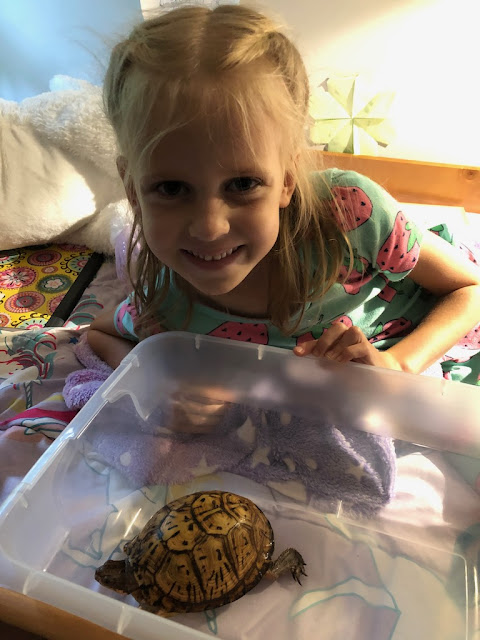 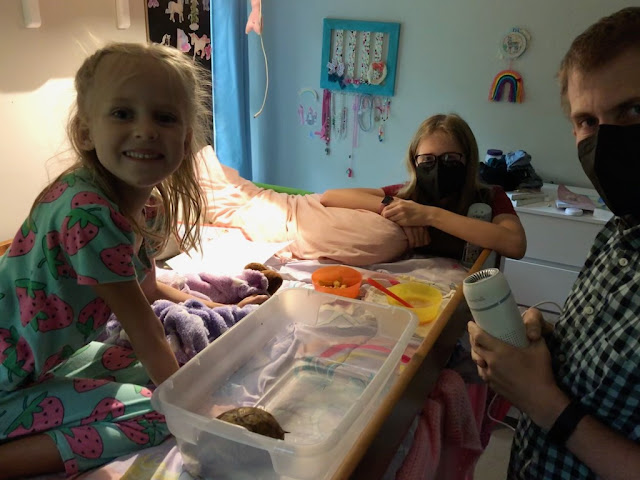 Zoë was the first to notice that the turtle had a snail riding on its back! 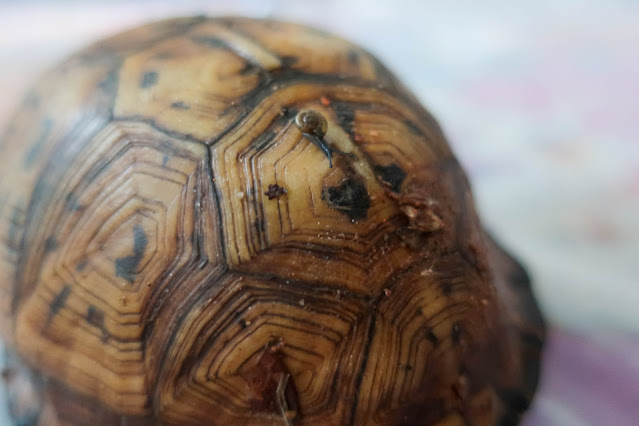 We spent some time researching turtles of Georgia in order to determine the species (which we think is box turtle, though its shell is considerably lighter than a lot of the examples we found) and then spent a while longer sexing the turtle (to which Andrew exclaimed, "You did what to the turtle?!). We think our turtle was probably a female, judging by the shell shape (the carapace (or upper shell) was rather domed and had little flaring of the marginal scutes, while the palstron (or lower shell) lacked any significant indentation). Her eyes were not red. And her claws seemed...female-ish...as well. But we're not turtle experts, so I wouldn't trust our final ruling, after all, the turtle experts themselves warn that "due to variability in sex characteristics in box turtles, these traits are not always reliable for sex determination." 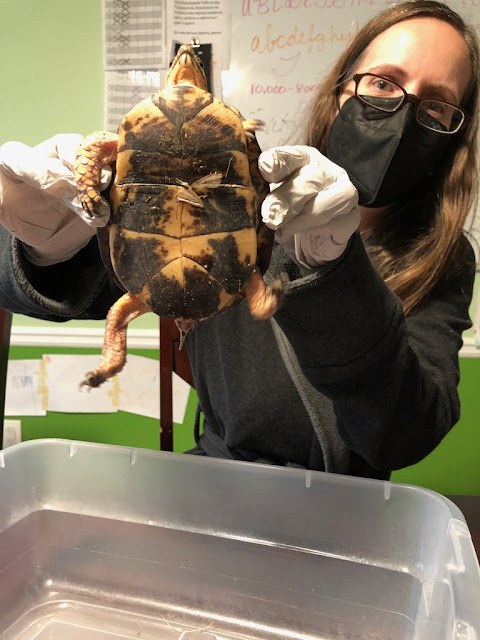 (The experts also say to look but not touch, which we didn't read until after we had the turtle in the box. But the experts also say to take a picture of the top of the shell as well as the bottom so I fail to see how we can be true citizen scientists without touching the turtle at least a little bit. And we were sure to put it back exactly where we found it...which was on our front porch...so that it could continue trying to find its home from where it left off. Excitedly, this may mean that we have some turtles living in our yard, which wouldn't be a surprise since we back onto a waterway. We've just never encountered a turtle in our yard before, let alone had one come to the front door.) 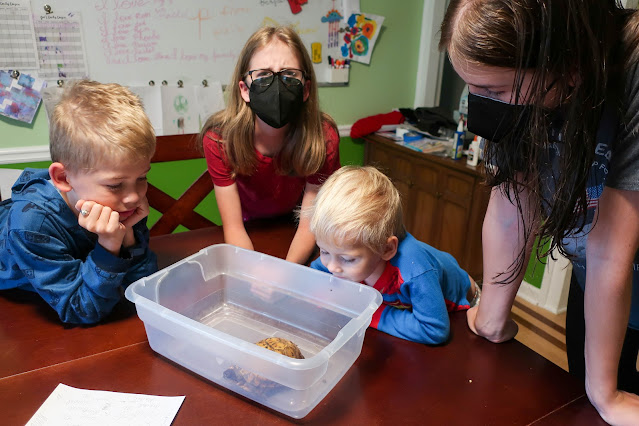 All too soon we took our little turtle friend outside and put it (her?) down on the front porch. She scuttled off to the safety of our hostas. Goodbye, turtle friend! I hope you find all your other turtle friends and live a happy life in our neighbourhood woods. 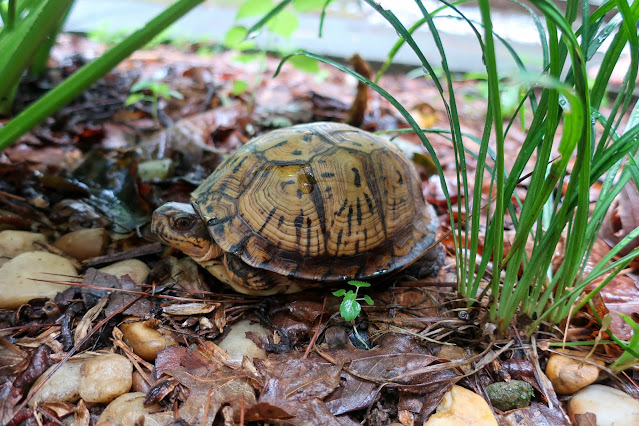 The little kids wrote about their turtle encounter and filled out a worksheet from the North Carolina Aquarium at Fort Fisher (which we've visited), but we will probably end up doing some more turtle activities tomorrow since I only just found the Box Turtle Connection page (and I'm off to report our sighting at HerpMapper.com).
Posted by Nancy at 7:38 PM