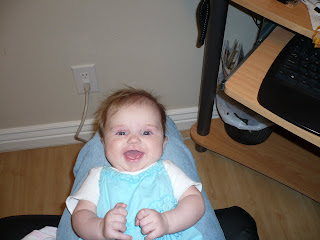 Now that Rachel successfully rolls over at least once or twice a day, she's moved on to a nobler cause: sit ups. 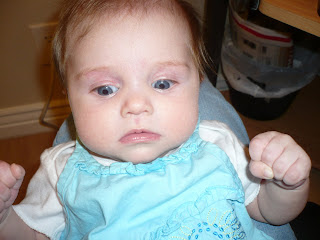 She's recently started to do it when she's lying on my lap or on the floor. She'll use her elbows to get her upper back off the floor and just pushes with all of her might. She can't quite do it on her own though, so I'll help her by holding her hands. Once she's in an upright position her favorite thing is to gnaw on my hand (or hers, whichever is closest). She makes the funniest little faces when she's trying her very hardest. 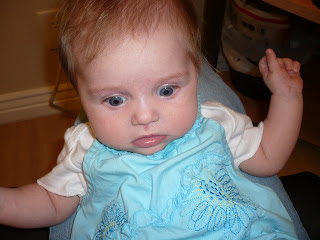 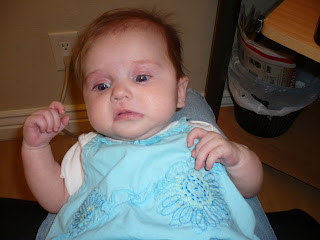 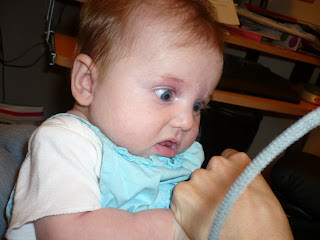 I guess we shouldn't be too surprised about this development because since the day she's been born she has been trying to hold up her head independently. She never really liked to rest her head on shoulders but liked to have her head up and looking all around her, all the time.

I do wish she'd slow down sometimes though. Her little friend, Maggie, is only one and a half weeks younger than Rachel and she still looks like a little baby because she's kind of floppy still and doesn't hold herself up really well. Rachel holds herself up as good as the 4 month babies at playgroup. She's so interested in everything that's going on.

When we do tummy time, she not only lifts her head and balances on her forearms, she also will get up on her knees. I'm just glad that she doesn't lift her tummy off the ground yet! She's too little! She's also almost to the point where she can roll over and get her arms unpinned from under her tummy.

There's just no stopping this girl!
Posted by Nancy at 10:57 AM