Rachel had Sawyer over to play today. Val had to teach a class this morning so we traded babysitting. She's going to watch Rachel while Andrew and I go on a date next week. I don't know if that counts as "conflict of interest" since we didn't use the official babysitting exchange our ward has set up (thanks, Kim!). Oh, well...

Sawyer is always just a step ahead of where Rachel wants to be. She idolizes him. He's crawling now and she really envies that.

She likes to touch him and grab him and squeal at him and attempt to follow him all around while he kept crawling just out of her reach as if to taunt her.

Rachel squealing, "Look at me, Sawyer!" 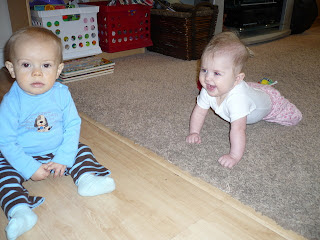 Rachel giving him her famous "Wow, he totally, like, looked at me!" face 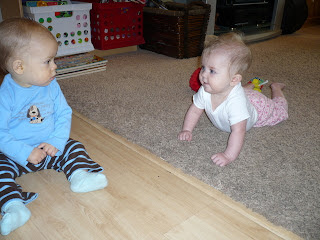 Lucky for me Josie was here today to help dish out some one-on-one attention to both Sawyer and Rachel otherwise we'd have been done for.

They did have a few good moments playing with each other though. Here is where Sawyer traded his chew toy for the lanolin tube Rachel was playing with. He handed her his toy, she threw the lanolin and he picked it up and started playing with it. It's a very popular item, apparently--I don't see the appeal, but that's just me. 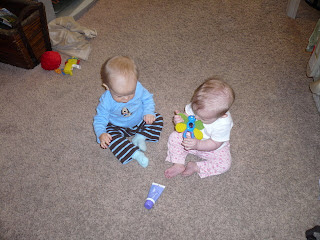 And here they are playing blocks together. He's a lot handier with the blocks...throwing, stacking, squeaking. Rachel just grabs and chews. 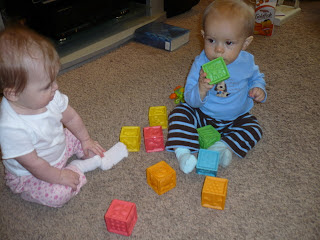 She's really starting to enjoy playing. Here are some pictures of her yesterday, halfway underneath the couch, playing quite rigorously with her blocks. It's nice that she will entertain herself for a few minutes every now and then. 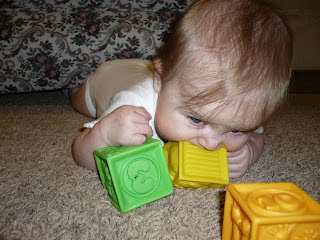 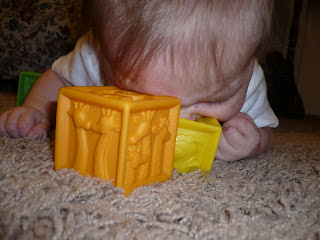 She's so cute. Anyway, back to today. 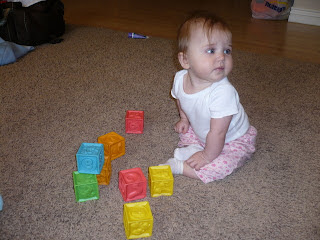 Rachel and Sawyer were on the floor having a grand old time together. Passing blocks back and forth, throwing them at each other, drooling a lot, babbling...just having a marvelous time. 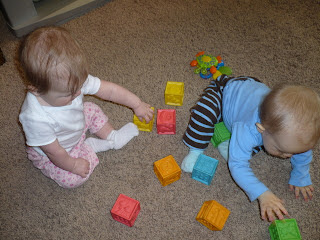 Now, I'm not sure what happened--whether she lost her balance, was given a non-malicious push by Sawyer, or what--but all of a sudden I heard a sickening *smack* and then that notorious pregnant pause before the screaming starts.

Rachel had tumbled backwards and hit her head on the corner of the TV stand. Apparently she was sitting about one inch too close to it. My bad. I didn't notice when I sat her there but as you can see in the picture, she's obviously perilously close to it (the grey thing right by her head--that's the TV stand).

Just as she started wailing I picked her up. She immediately stopped crying. Mommy's magic.

She had a nice impression of the corner of the TV stand on her head, which I tried to ice with some frozen peas. That was a trick. Every time I put it on her head she would look up to see what it was, so I'd move it back to her battle wound and then she'd move her head so she could see what was on top of it. We were getting no where.

I had to nurse her in order to keep her still enough to ice her head. She, of course, fell asleep and then I was all worried because I didn't check her pupils for proper dilation or to make sure she wasn't lethargic. It was a head injury, after all.

She woke up about a half hour later and was perfectly fine, save it be the nice sized goose egg she has on her head. Poor baby. I'm telling you, once these kids discover movement there's no keeping them safe!

She's still the same happy and energetic baby that she was before, so I'm not too worried about her. Josie and I didn't want her falling over again and hitting the goose egg, though, so we put some pillows behind her while she played. Josie even lent her a toque and sat by her so that she wouldn't topple backwards. 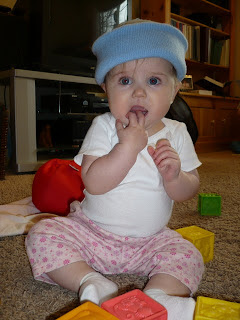 As Rachel was playing with her blocks, she did end up losing her balance, as she always eventually does, and started teetering. Josie rushed over to catch her, but her efforts were futile because instead of falling backwards, Rachel pitched forward and did a perfect face plant, sending her off wailing again. But only for a minute...she wanted to get back down and play again. What I don't get is how she got her legs out from underneath her in order to do the face plant in the first place. 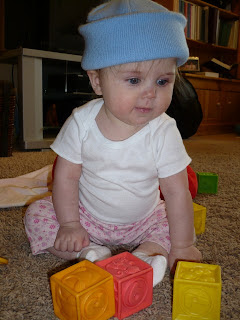 Well, this isn't her first bump and I'm sure it's far from the last so I guess I'll just have to get over it. She just seems too little to be covered in bumps and bruises but I guess that's what happens when you add momentum to life. Pity the day she learns to walk.
Posted by Nancy at 3:20 PM