We were planning on taking Christmas pictures yesterday while we were out in Islamic Cairo with the Schillings and Courtenay, who had stayed a day longer than the other girls who stayed at our house. When I woke up in the morning, however, I...well...I never really woke up.

When I started having children of my own, my mom gave me this advice:

Never have a baby and a teenager at the same time.

This week I found out why. It's because it's really, really hard. Something about staying up to wait for the teenagers to come home...and then listening to them tell you about everything they did that day...and then waiting for them to go to bed...and then getting up a few hours later with the baby... 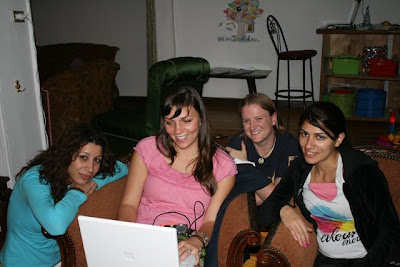 Well, it's just hard, and long, and tiring.

It didn't help that Rachel was sleeping in our room so that we'd have beds and rooms for all the girls to sleep in. Every time we'd go to bed, Rachel would wake up screaming. And even though she would stay awake for a half hour to an hour at 2 AM, she still managed to get up for the day before 8 o'clock in the morning.

And I just don't think I would wish having a baby and a teenager on anyone. I don't know how my mom did it!

It's not that we minded having those girls stay with us. It's just that I was tired. I was so tired. And I woke up not feeling great.

So Andrew took Rachel for the day, and he went out with Courtenay and Carolee and Josh, leaving me home to sleep. I didn't mind one bit. I slept and slept and slept until around 2 PM when they called to have me meet them for lunch. When I woke up my headache was almost gone and I felt a ton better.

I decided that I could walk all the way to the Maadi Grand Mall to meet them for lunch and I was amazed at the sights that met me on the street.

It's Eid al-Adha, or the day of sacrifice. It's a huge holiday during the month of al-Hijjah. The streets were deserted, except for children. They were full of children. Children, children everywhere. It reminded me of Christmas afternoon--after the presents are opened and the children are going crazy so the parents just send them outside to play.

The few adults I saw were covered in blood and carrying bags full of carcasses, absolutely dripping with blood. It was rather grotesque. 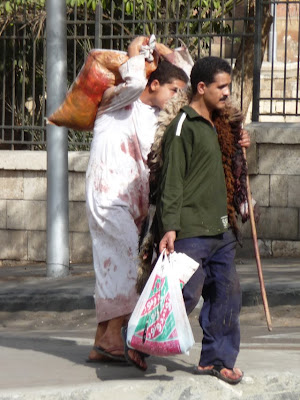 Apparently what I saw was nothing, though. In Islamic Cairo it was far, far worse. The streets were running with blood. Andrew et al. walked from the Citadel to Sultan Hassan, and from there to Ibn Tulun. Usually you have to jump out of the street to avoid puddles of mud. Yesterday, however, it was to avoid puddles of blood. 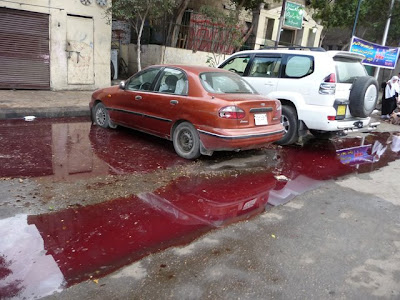 Cars would drive by and spray blood everywhere, and you'd jump onto the sidewalk to avoid getting splashed only to find yourself trapped by a pile of goatskins--and you'd have to leap over another bloody, muddy puddle to continue on your way. 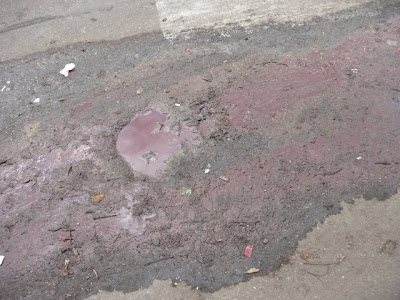 I am so glad that I stayed home to sleep. I can hardly stand walking past a butcher shop. Andrew et al. said the whole of Islamic Cairo smelled of fresh blood and death.

I suppose it's kind of like our Thanksgiving several years ago when people would actually do their own slaughtering. And that's probably why I was born in this generation--so that I can just go to the store and buy a pre-slaughtered, pre-drained, pre-plucked turkey. I can't deal with that much blood.

(In fact, like Bridget, I can't even deal with raw meat so I'm afraid that if I'm ever in charge of Thanksgiving dinner it will forever be sans turkey, unless Andrew wants to cook one, which I'm sure he doesn't.)

It makes me gag just to think about it. It gives me shivers--a huge case of the heebejeebes!

Even though I know it's just blood from goats and cows I can't help but think of all those descriptions of horror that I've heard. Rusesabagina described the streets after the Rwanda genocide as "running with blood." Truthfully I didn't think it was possible for a street to actually fill up with blood. But it is.

Flanders field was described of as red with blood. Again, I thought this was metaphorical. The Land of Desolation in the Book of Mormon, with descriptions of bodies heaped upon the earth? I also thought that was perhaps over exaggerating a bit. Not literal...

But seeing these pictures made it possible for me to picture Flanders field, Rwanda, and all those Book of Mormon battles a little differently. I think I just wanted to think, in my mind, to help save my lunch, that those descriptions were figurative or poetic. But they weren't.

Streets really can, and sometimes do, run with blood. 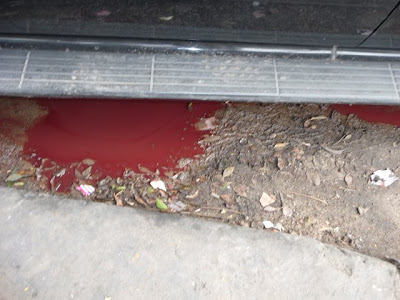 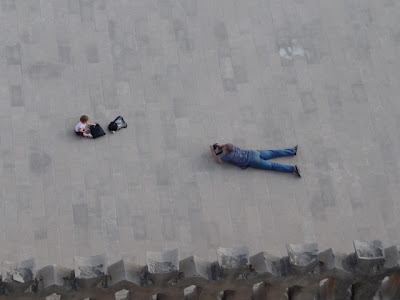 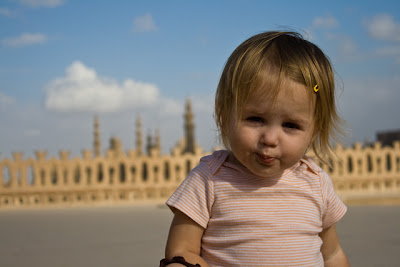 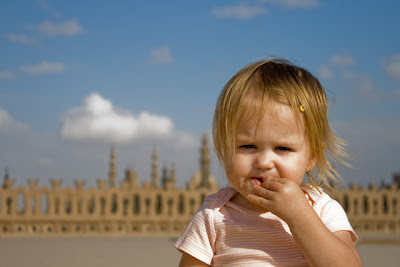 We had a good lunch together at Arzak, despite the stories of carnage encountered on the street and the fact that the restaurant was overrun by unruly children. When we were finished we headed home, still discussing all the slaughtering that Andrew and Courtenay had seen.

"And there were heads just hanging all over the place...and hooves and tails and organs scattered in the street...and blood running everywhere...and skins piled up this high...and...and...and..."

I just kept affirming that I was glad I hadn't been with them. Because I really was glad that I wasn't there.

We turned to walk down our street, Andrew and Courtenay still nattering on and on. 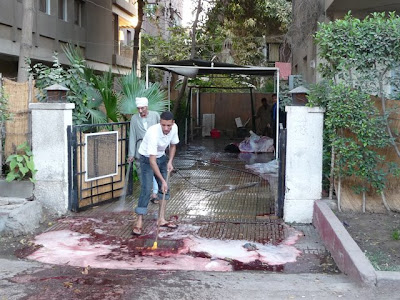 Our neighbours had slaughtered what looks like a cow and were in the process of cleaning off their driveway right when we walked by. I had to keep walking, but Courtenay stopped to snap this picture.

That's my street covered in blood! And here I thought I'd avoided all the sacrifices so well...

Courtenay and I went out to Khan al-Khalili later on in the day, my first time directing a taxi without Andrew's help. I spoke to the driver in Arabic--because he took the Ring Road to downtown, and for some reason I thought he'd take the Kornishe. So I asked him if he was sure he was going to the right place and he just explained he was going to take the Autostrade. I felt successful, even though our conversation was short.

Luckily we didn't see any blood running down the streets when we got downtown, but we did see that they had been collecting goatskins all day and there were huge piles of skins. Stacked as high as our dining room table, probably. Kind of gross.

But the Khan was clean, at least as clean as the Khan can be. What I mean is, there wasn't any blood. It was still pretty dirty. 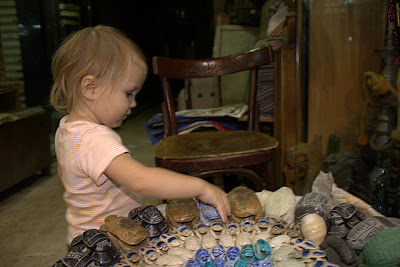 Rachel looking at some scarabs in the Khan

It was eerily empty, though. We'd turn down an alley and it would be completely empty--no vendors, no open stores, everything closed up for eid. Road Nine was the same way--almost every store was closed--which is why we went to the Khan in the first place. There were still enough stores open, though, and Courtenay was able to find the rest of the souveneirs she wanted.

Rachel and I spent most of our time just chatting to vendors. I'm pleased to announce that I've lot the tourist-look and, although I will never have a chance of being mistaken as a local, I am recognized as "living here."

We walked past one man, named Mohamed, and he called out to Courtenay, "Hello, tourist!"

She walked on by and kept looking for hot deals.

I asked him how.

"You come here with your baby and a sweater. You don't look impressed by any of this. You know it's winter. And you speak to me in Arabic. She comes here with a backpack and a bag and is wearing a t-shirt and looks really excited to be here."

I told him he was, for the most part, right.

"You probably live in Maadi," he said, "Does your husband work or study?"

Right again. I told him my husband studies.

Ummm...yup. What is this? Does he read my blog?

He was really nice and we chatted with him and his friends while Courtenay looked for a lantern. He let Rachel hold his cell phone and turned on some music so that she could dance. He wondered why we didn't pierce her ears. So I told him that in America not all the girls get their ears pierced. I told him that I didn't have my ears pierced and he found that really amusing...because all girls have pierced ears.

Anyway, we had a really good time. Courtenay is really great at bargaining. I think I may have learned a few new tactics from her.

Soon it was time for us to go; I was a little worried about catching a cab because the streets were so empty, but there are always tourists coming and going so we were able to find one right away. Courtenay asked the taxi to take us to Maadi and he agreed to. When we got in I clarified that we needed Sakanat al-Maadi, and he said he knew where that was.

He even said that I spoke beautiful Arabic, which was funny because all I said was, "Sakanat al-Maadi."

When we got to Maadi I was able to direct him all the way to our apartment without getting lost. He told me that he didn't know Maadi well, so I just said left (shamaal), right (yemin), and straight ahead (ala tool) where applicable. And then I used my wonderful Jordanian to tell him "Houn kwais" or "Here's good." I should have said "Henna kwais," but I just haven't adopted that yet.

But I got us home! Without getting lost! And without running into rivers of blood!
Posted by Nancy at 6:00 AM