An orange by any other name is still as orange

My friend Sara, whose children we were babysitting, brought us a beautiful bowl from Tunisia, which we promptly filled with fruit. Actually we had to go grocery shopping first since we hadn't done that in about a month, which isn't exactly all that bad until you remember that we live in Egypt and the shelf life of food here is either 2 days or 2 years. Basically we had no food in our house except for Fruity Pebbles (also a gift from Sara, but not from Tunisia) or poo milk (valid for 6 months out of the fridge). So we didn't really do much with the bowl very promptly. 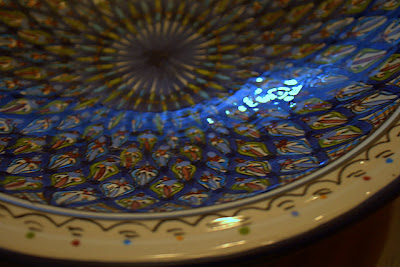 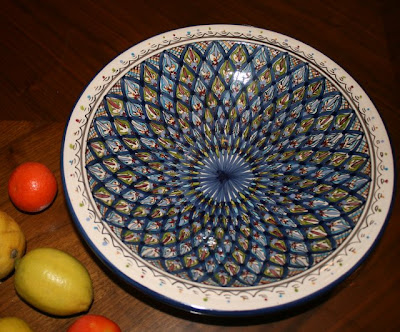 When Andrew got home from The Tree, I (promptly,this time for real) put some bananas, clementines, and lemons in the bowl. He made mushroom soup for lunch and we all sat down to eat. 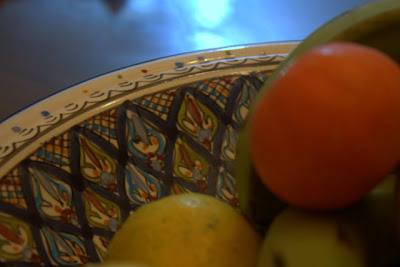 It's a beautiful bowl and the fruit looks 10 times more tempting in it. Perhaps now we will eat more fruit and have less of it rot at random in our fridge.... How did Sara know that a fruit bowl is exactly what we needed? Probably because Andrew spent like a half hour at her house last week rearranging the fruit in her fruit bowl after dinner. She could tell he was jealous. 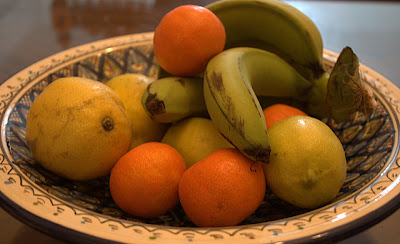 Rachel thought the mushroom soup was delectable and didn't hesitate to lather it up in her hair, which is apparently genetic since that's what I did with my favorite foods as a child. She was ridiculously messy by the time she'd had her share of soup. And then she wanted an orange. 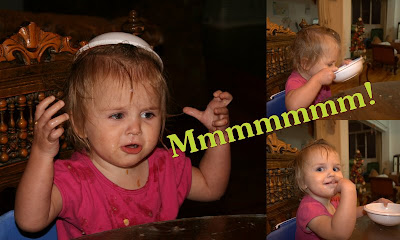 "Do you want an orange?" I asked her. She nodded.

"Clementines are oranges," I informed him.

"No they aren't. They're clementines."

"Which is a kind of orange."

"Then why do we call them clementines?"

"I don't know. They're oranges, though. Just like apples are apples no matter what we call them."

"Golden delicious, red delicious, granny smith, fuji..." My grandpa had a farm and enjoyed grafting apple trees. That doesn't mean I can name all that many varieties of apples. I can't.

"Okay, but an apple is an apple. They have different names but we still call them apples. In multiple languages we call oranges by different names--in Italian and Arabic they do--so they probably are different fruits and not just different oranges. Otherwise we'd call them oranges."

I left the table to look some things up on Wikipedia, namely oranges. Clementines are a type of mandarins which are a type of orange. As are tangerines. And a lot of other orange-fruits that are called things other than just oranges. For the sake of Rachel, I argued, it was fine to just call a round, orange fruit an orange--even if it was technically a "clementine"--because she's too little to understand the difference between oranges and blah, blah, blah. I win.

So I grabbed an orange out of the bowl and started peeling it for Rachel, and in the true Christmas fashion I peeled it off all in one peel. It's kind of a tradition in my family, and in other families where oranges are a Christmas must. Boy, do I miss Mandarin oranges at Christmastime! Clementines will do--because clementines are Mandarins and Mandarins are oranges. For some reason the States won't import oranges from China. I don't know why since they import everything else from China, but oh, well. Clementines are local here in Egypt, and Egypt doesn't feel the need to import Mandarins as well, so we're stuck with them.

Anyway, my peel came off looking like an elephant, like it should if you do it the right way. I showed it to Rachel.

"Look!" I gloated, "Mommy peeled the orange all in one piece! It looks like an elephant!"

"Eeeeeeeeeoooooo!" said Rachel, lifting her messy hands up high to make a "trunk."

"Yeah, that's what an elephant says," I praised her, "Good girl!"

"Uh-oh," I told Andrew, "I think she now thinks that oranges are elephants."

I picked up an orange and showed it to Rachel.

An orange is an orange, I suppose, and if she wants to call it an elephant she can, since I call it an orange and Andrew calls it a clementine.
Posted by Nancy at 10:15 AM