A little coughy will keep you awake at night

Benjamin seems to only be able to sleep as long as he does not cough. Unfortunately, he has a cold (his very first one, courtesy of Rachel, courtesy of some other kid in her kindergarten class I'm sure) and this cold comes with a cough. He's not really sure how to handle it...so mostly he just screams which I imagine only makes his throat feel worse. It's lovely.

Needless to say, his cough is keeping him (and me) up all night (and day).

So our day was a little bit rough.

Benjamin woke up before I took Rachel to the bus stop. He fell asleep for ten minutes in the morning, for about half an hour around lunch time, and then again for a half hour before Rachel came home from school. I was ready to curl up in a ball and die because that's about how our night went as well.

Lucky for him, he's a pretty cute baby. Sometimes he reminds me of a porcelain doll. This is one of those times: 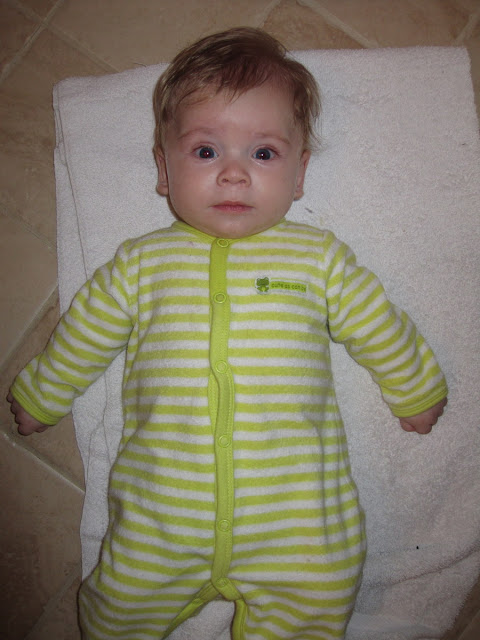 His skin is just so perfectly smooth and his eyes so big and glossy and his hair so fine and wispy.


But it's no wonder there's a slew of horror movies about dolls (not that I watch horror movies...bahaha...Bambi gave me nightmares!) because this little doll was a horrible baby today!

I wasted my whole day away just holding him, willing him to stop screaming and fall asleep. I managed to capture this happy stoic face of his only because Miriam came in with a thing she'd constructed out of the Pop-Ons* seesaw. She came to show it to me while I was changing his diaper and she sang a little song while she shook it around: "Rocking horse! Rocking horse! Swing and glide, back and forth!"

Benjamin stopped sobbing and moaning and stared at her, completely interested in whatever it was she was doing.

She only knows that one line of the song (it's from one of our yoga videos (for the bow pose)) but I told her to just keep singing that song and shaking that toy until Benjamin got bored of it. He was transfixed with her shenanigans for a full ten minutes. I sat on the bathroom floor and leaned against the counter. Our day was just that pathetic.

When Rachel came home from school and all dreams of a luxurious nap time were thrown out the window I decided that we may as well get out of the house and enjoy the day, so I threw Benjamin in the front carrier and went outside and...he promptly fell asleep (the little stinker). 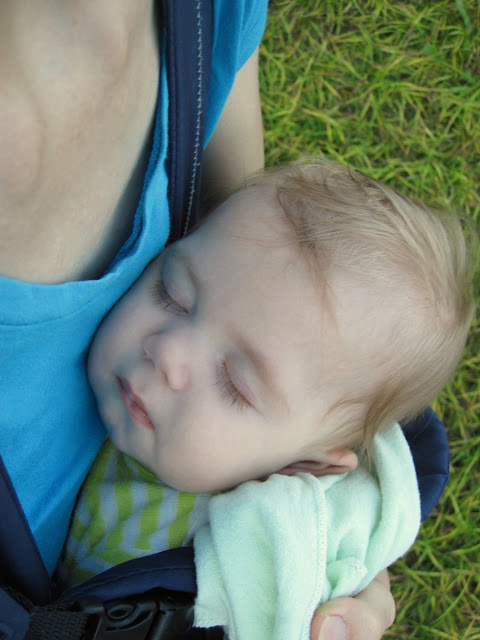 We went to the park anyway because I knew if I put him down he'd just wake up screaming again. Besides, the fall weather is so beautiful and rejuvenating: 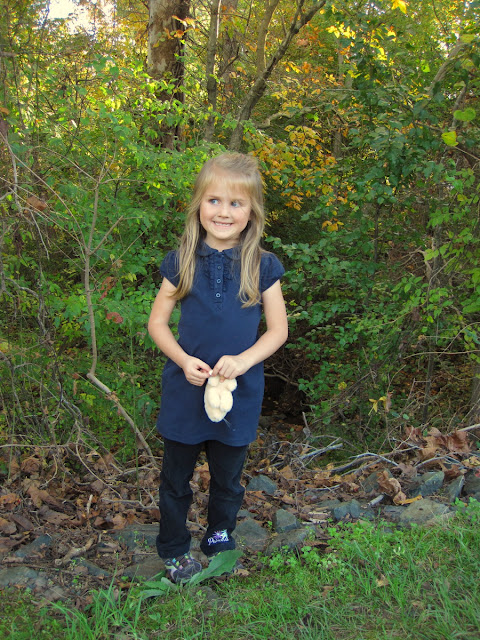 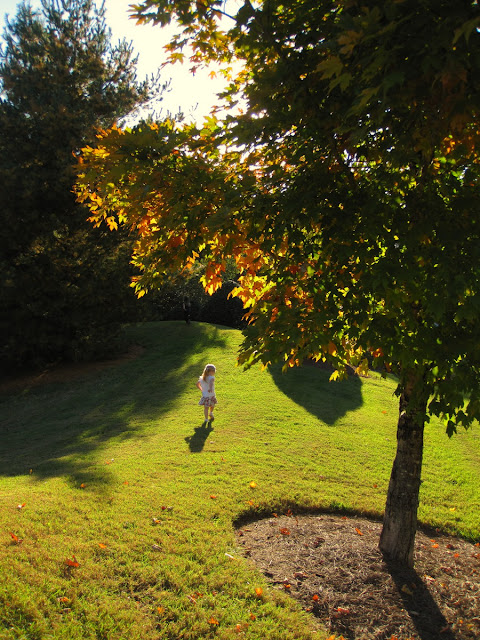 So, we played for a while and Benjamin slept. 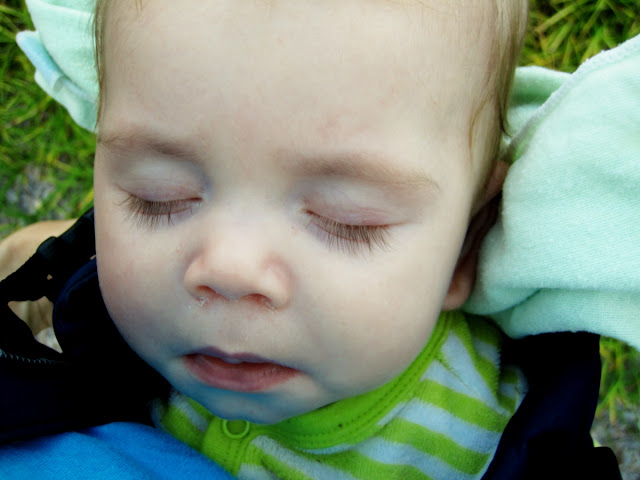 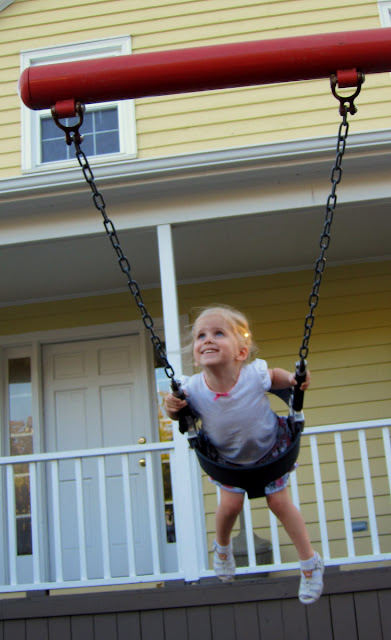 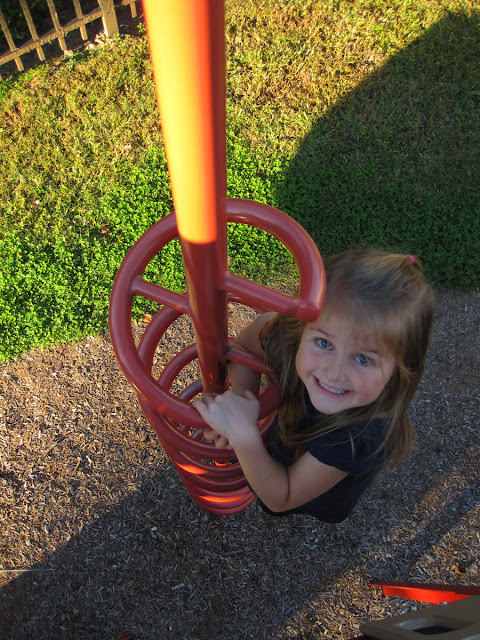 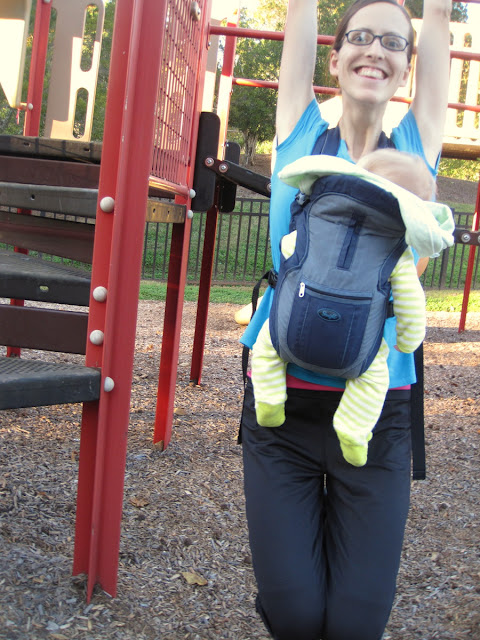 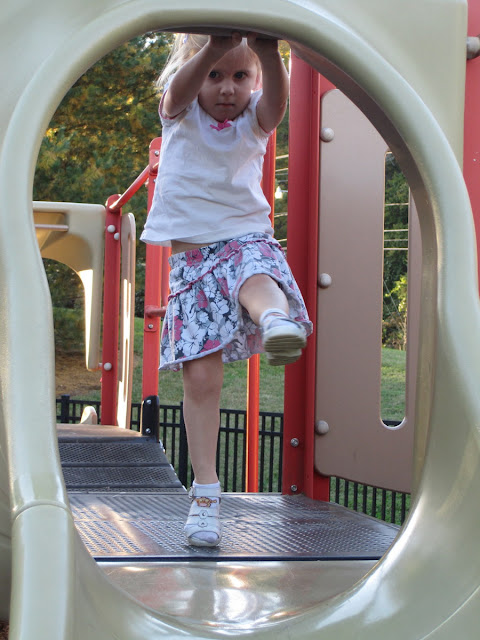 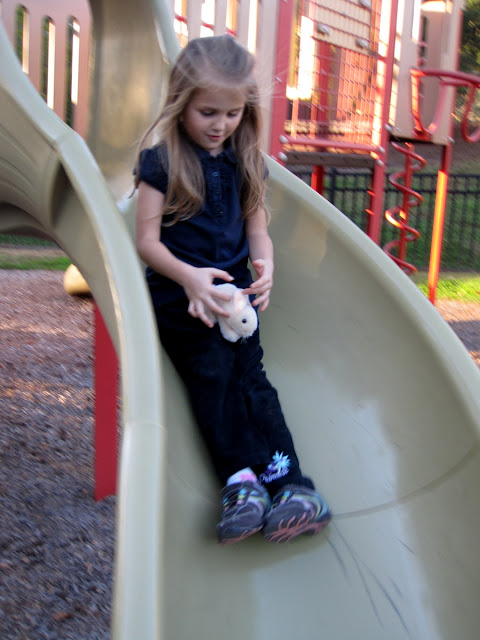 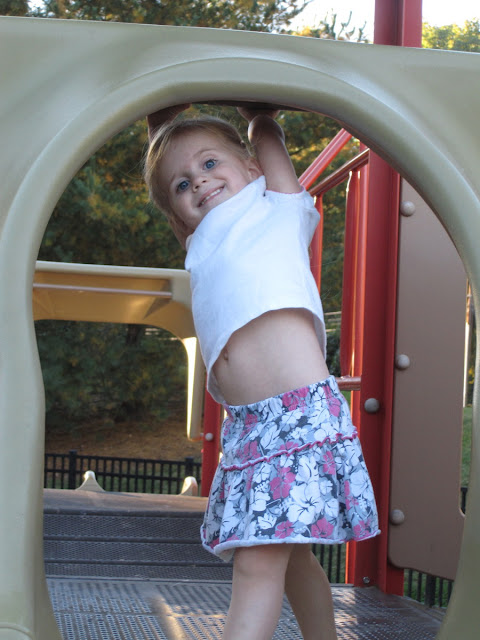 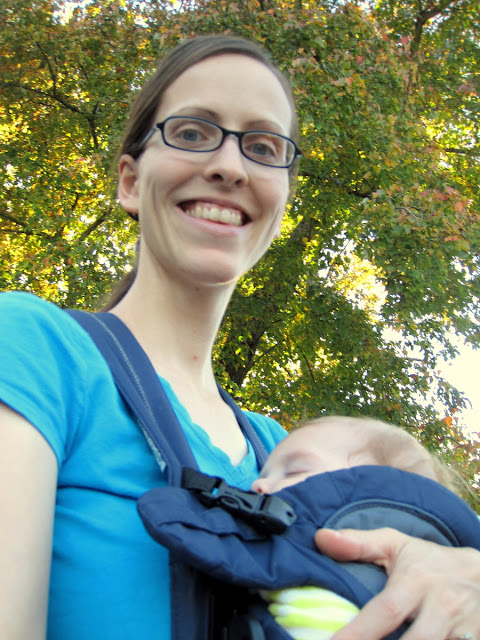 And then Benjamin woke up and Miriam started acting melancholy (she didn't get a nap either) so we decided it was time to go home and make dinner. 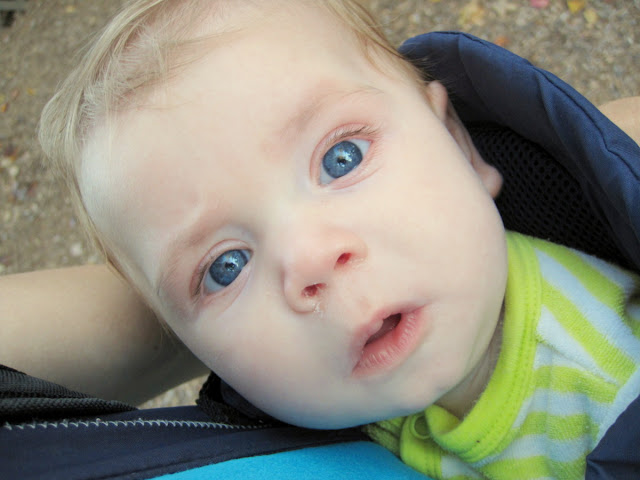 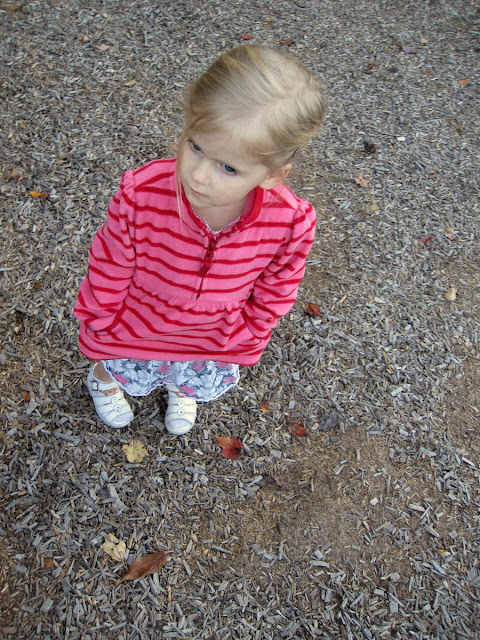 Along the way we stopped to roll down hills (well, Rachel did—nobody joined her) and collect some pretty leaves. 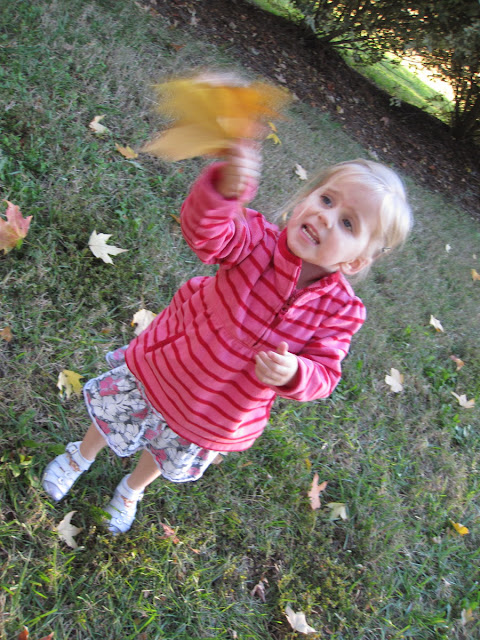 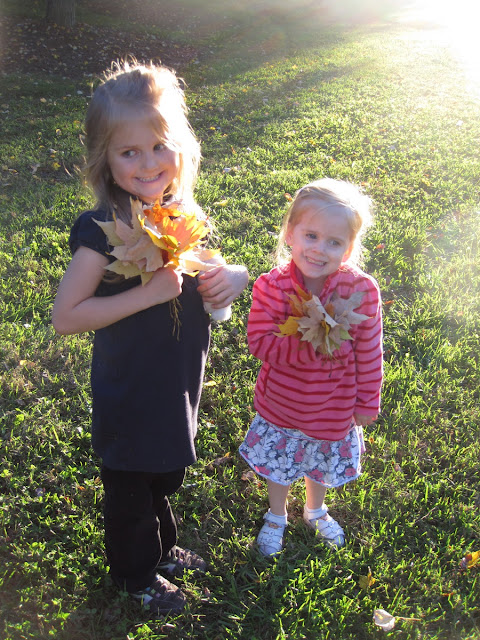 When we got home the girls arranged their leaves around our pumpkins. 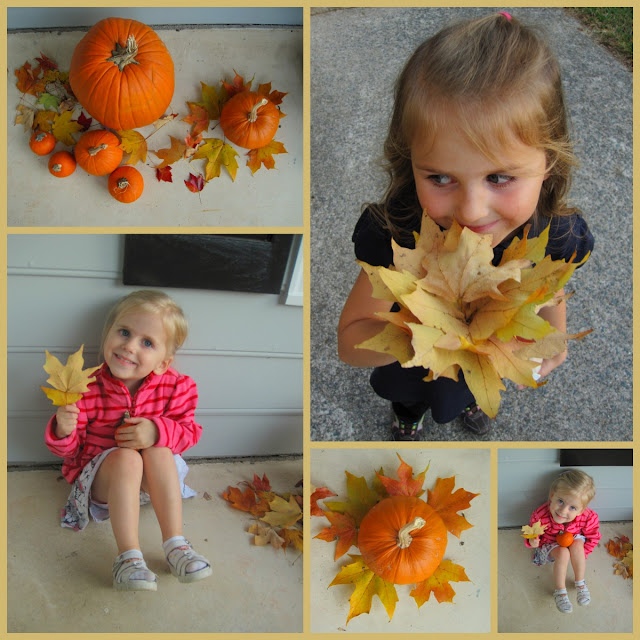 Rachel is particularly proud of the "sun pumpkin" she made: 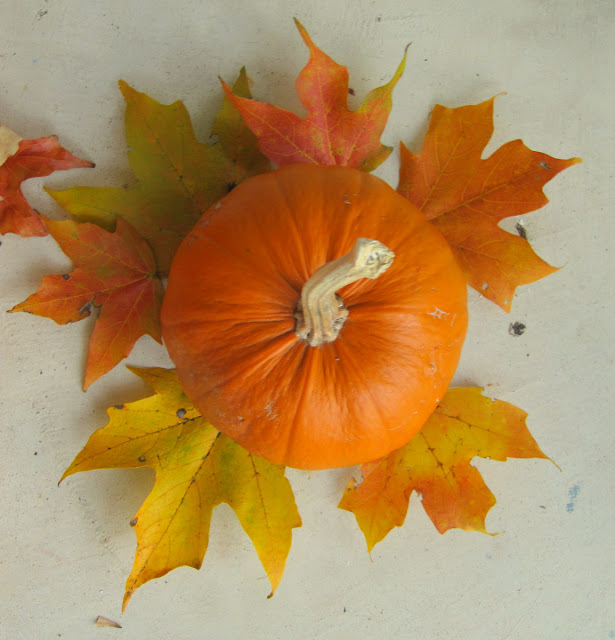 Miriam was simply happy about her leaves: 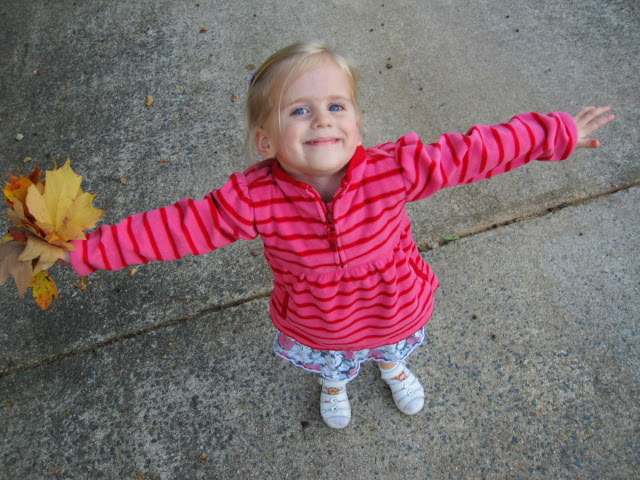 I went into the kitchen and began to hunt around for a quick meal (because we came home from the park later than I had expected and I hadn't done any dinner preparations before we left) when I heard Rachel yelling from outside, "Mom! Help! I'm stuck in the tree!" 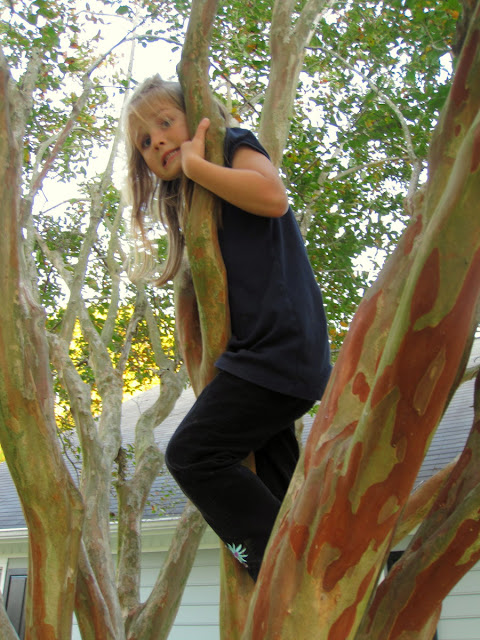 And—go figure—she was stuck in the tree. I had to coach her all the way down. 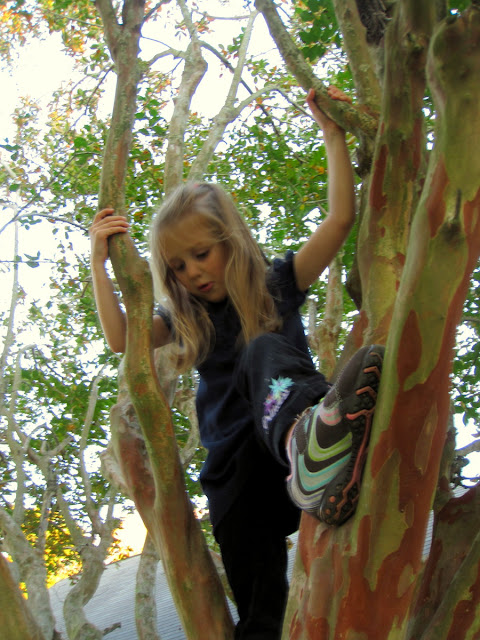 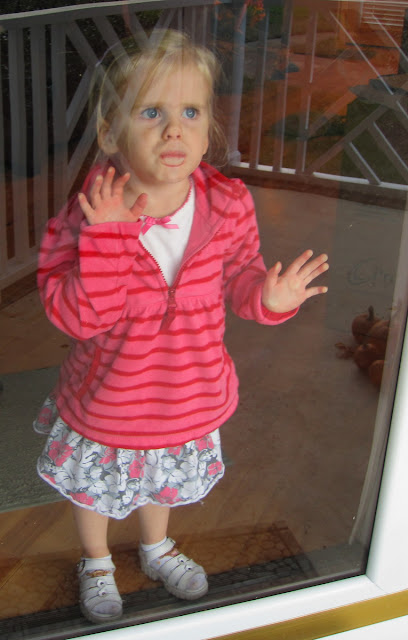 So by the time I'd gotten one kid out of a tree and another one out of a sweater, the third had started doing this again:


So I fed the third child while the first two continued to run amok. He was content for a few minutes—content enough to sit in his chair all by himself: 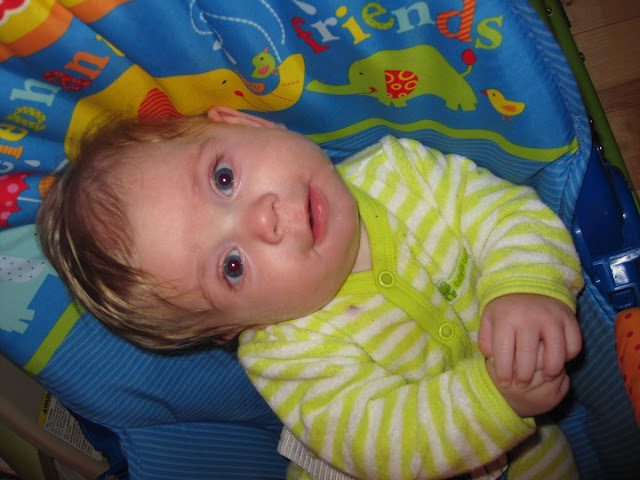 ...and for his smile to swallow up his face: 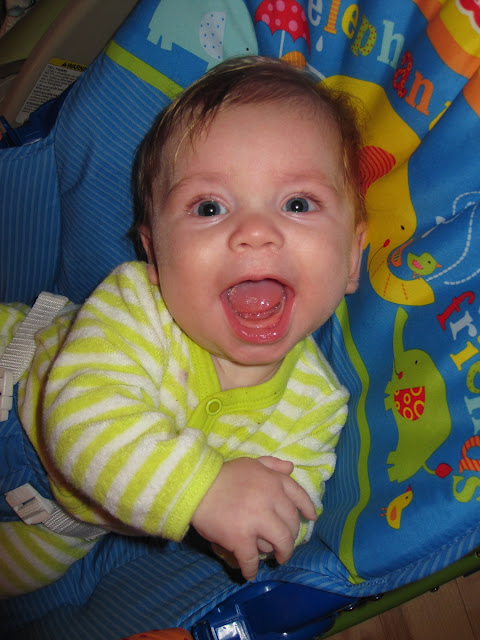 Unfortunately, the other two were still prowling aimlessly around the kitchen, opening cupboards and the refrigerator. It was hopelessly late and Rachel had to pack a lunch for tomorrow's field trip anyway so we had "Rachel's Lunch Preview" for dinner and ate as we packed. 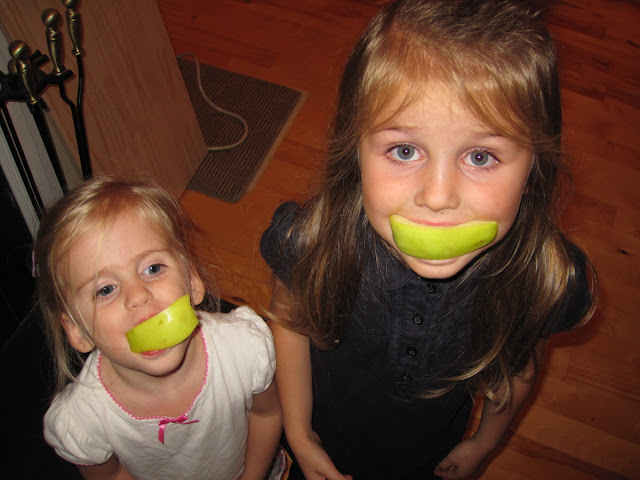 Oh, and we made this lunchbox for Rachel to take to school because we didn't have any brown paper bags and her lunch container had to be disposable. While Rachel decorated the front, Miriam and I both made notes to put inside. It'll be the awesomest lunch ever! 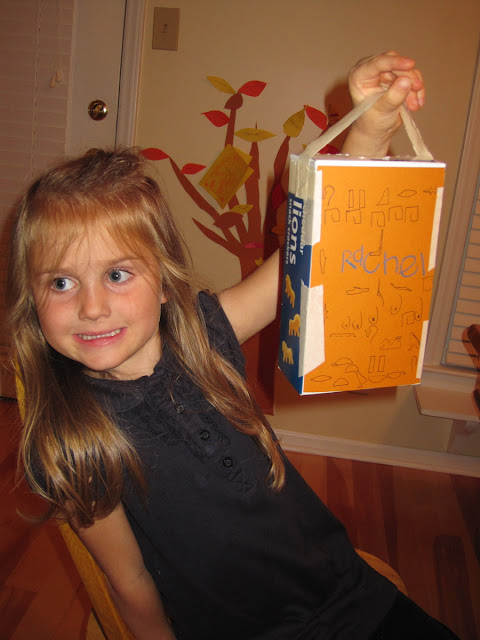 And then Daddy came home and we had a quick FHE (Miriam gave the lesson; she was so proud) and then tried to send all the kids to bed but ended up pacing the floors with a little man until just a little while ago. And now Andrew's doing the dishes and I'm typing this and we really, really, really need to get to bed.

I for one am crossing my fingers that I'll get at least a couple hours of uninterrupted sleep...but I don't know if I will because there's been so much coughing in our house lately.

PS. I still haven't told you about Monday night last week when Rachel threw up all over the top bunk (and bottom bunk, and floor, and everywhere) due to too much coughing. We had to wash her comforter (and many stuffed animals and pyjamas and so forth), Miriam's comforter and the sleeping bag (that we keep on the floor for Miriam to land on when she falls off the bed), in addition to having to scrub down the railings of the bunk bed and mop the bedroom floor. That was also a great day...

* There is no wikipedia article about this toy if anyone was hankering for a topic to write about on wikipedia.
Posted by Nancy at 1:51 AM