"I can't believe it's a new year!" Rachel proclaimed excitedly after getting home from school.

Since beginning kindergarten she's been acutely aware of the calendar. She was wondering aloud all weekend what the calendar board was going to look like when she arrived at school on Monday morning. And she was not disappointed—"Even the cafeteria looked different!" she squealed.

"We should start some new year traditions," Rachel suggested at dinner. "Like, Miriam and I can always wear the same shirt on the new year and we can make tuna fish sandwiches for dinner and then maybe we can carve pumpkins. Do people always have pumpkins for the new year?"

I explained the difference between a new month and a new year but it didn't deaden her excitement about the day at all. Mostly she was simply excited about the things she was already doing (like wearing the same shirt as her sister and eating tuna fish sandwiches) but threw in a couple of hopeful ideas (like getting pumpkins) in case I got caught up in her excitement. I didn't.

Instead of carving the pumpkins that we didn't have we went for a walk. It wasn't a big excursion—just up and down our street—but the girls were jumping with joy the whole way. It's a new year month after all. What could be more exciting than that?

I'll tell you—pumpkins have started slowly springing up in our neighbours' yards.

It began a few days ago (Thursday, I think it was). We were loading the kids up in the van when Miriam bailed out of her car seat, jumped out of the van, and began bouncing up and down while screaming for joy: "Yay! Yay! Yay! It's my birthday! I can't believe it—I'm three now!"

She was confused and disappointed when we informed her that it was not, in fact, her birthday.

She pointed to a pile of pumpkins in the yard next door as if they explained everything and said, "But Mom...pumpkins!"

She knows her birthdate; she'll tell people, "My birthday's name is October 25th" (she says the same thing about our house, "My address's name is 36 Buzzing Bee Drive" (disclaimer: not our actual address)) but she doesn't have any concept of time or dates, aside from that her birthday happens when there are pumpkins and on Sundays she gets to wear a pretty dress and go to church.

Since then more and more pumpkins have been appearing on doorsteps and gardens and my girls, who are earning their pumpkins by doing chores, have been more helpful than usual as of late.

Anyway, we went for a walk up our street and admired our neighbours' pumpkins, enjoyed the flowers that are still in bloom, and collected a few red leaves that had fallen from the trees. 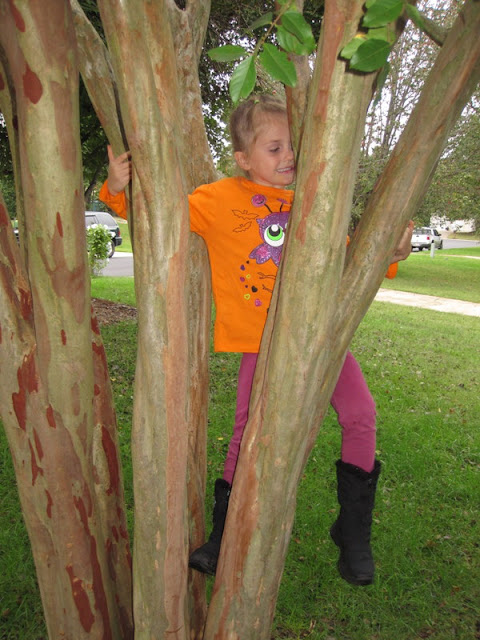 Autumn is a lot slower here than it is in Utah—we might actually get a whole season's worth of sweater weather. I'm excited because as much as I love summer and loathe winter I really quite enjoy fall. I love the warm colours of fall, the apple cider, the pumpkin pie (or pumpkin anything, really), the crisp (but not cold) air. It's just beautiful. I'm glad to have it last more than just a couple of weeks and I'm excited for all the holidays we get, too: Canadian Thanksgiving, Halloween, American Thanksgiving...Christmas and then the actual New Year (which today isn't, contrary to what the little people in my house might think). There's so much fun to be had and so much to be grateful for—why wouldn't we like fall?

Here are my three cuties all decked up and celebrating the new month: 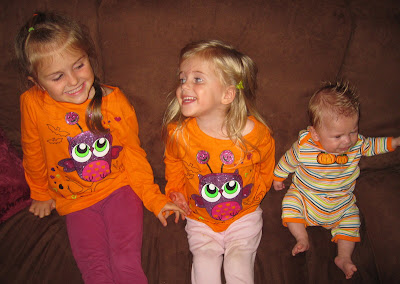 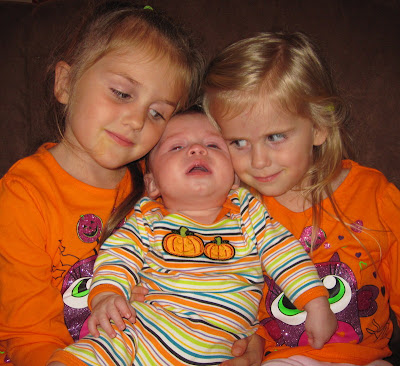 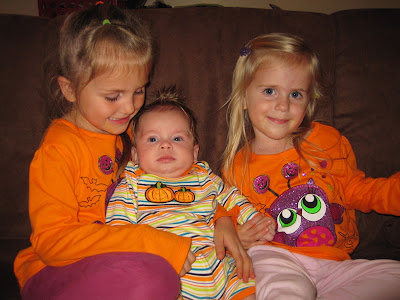 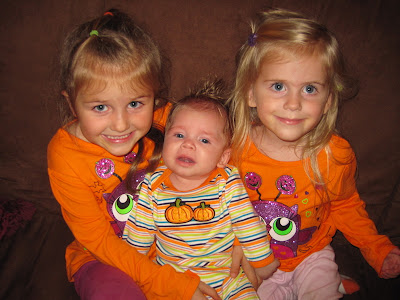 The girls were having a great time and kept asking me to take more pictures. Benjamin, meanwhile, looks like he just wants to be rescued.

Oh, and as a side note, our girls had a grass fight in the backyard before we left for our walk and Miriam decided to keep a handful of grass. She was pretending that each blade of grass was a bone for a puppy and she'd feed them to imaginary puppies every now and then. We ran into one of our neighbours on our walk and Miriam showed them her grass.

"Really?!" I asked. Impressed that they could glance at what looked to be a handful of grass and immediately know it was something different.

"Sure. Smell it," she suggested. I did. It was definitely onion.

"Wow! Our whole lawn must be made up of onions then!" I said.

"Actually, it probably is," she told me.

Apparently they have an onion problem around here. Apparently in the middle of the summer when everybody's cutting their lawn in the heat the aroma in the air is not of freshly mowed grass but of freshly cut onion.

"That's awesome!" Andrew said when I told him.

"I know!" I said. "We have an unlimited supply of onions!"

"No—I mean, now that we know what it is maybe we can find a way to get rid of them."

From what our neighbour told me it seems the onions are so rampant that resistance is futile. Besides, free onions! I say, let it grow!
Posted by Nancy at 10:24 PM