When we first found out we was going to have a boy we were gifted a monkey outfit. It was the first outfit we got for him and it changed my mind about boy clothes—you mean, they make cute stuff for boys?!

And then Benjamin, the silly guy, came far too early to fit in that 0-3 month monkey outfit, so the same person who had given us the original outfit ran to the store and found a preemie monkey outfit for Benjamin to wear.

Now that Benjamin's wearing cloth diapers he's big enough to fill out at 0-3 month onesie (cloth diapers make your bum look big) so I put him in his monkey outfit for church today but before we left I took some pictures of Benjamin with his old monkey outfit. 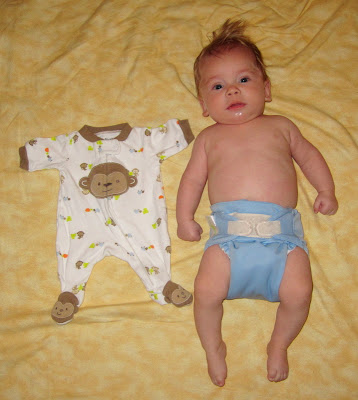 And with his new monkey outfit: 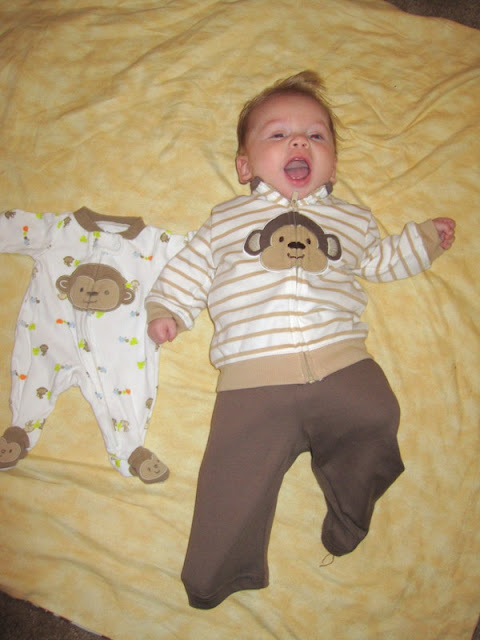 You can see the pants are still a bit too big for him, so I took those off and found a different pair for him to wear: 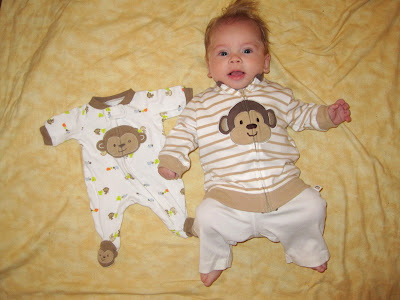 Can you even believe how big he's gotten? 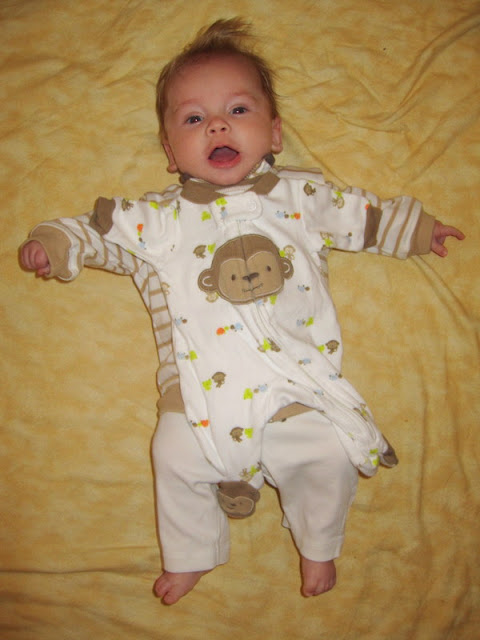 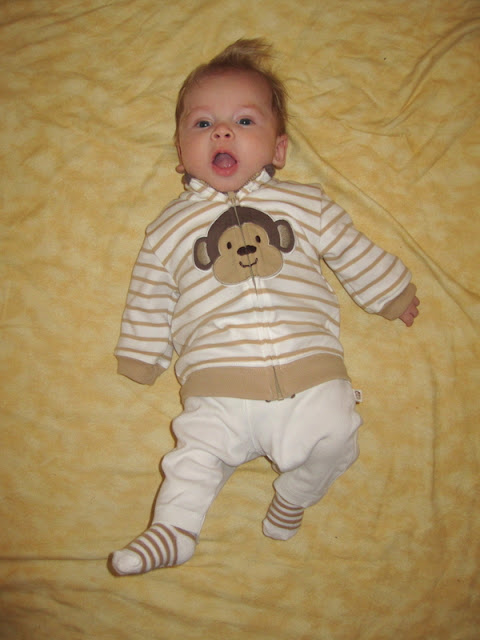 That NICU world seems like a distant fog at times—most of the time, actually—but sometimes I'm flooded with memories and tears well up in my eyes and there's nothing I can do to make them stop. They're tears of grief, of reliving that agony, sure, but mostly they're tears of gratitude, tears of joy, tears of relief. I love this little monkey so much!

Last night I watched the General Relief Society Meeting from the comfort of my own home. It started at 8:00 here, so in theory the girls should have been asleep. Andrew was writing a paper. I was rocking Benjamin (because he still gets colicky from the early afternoon on). The girls came out of their room what seemed like a thousand times through the first part of the meeting. I heard every excuse in the book. Andrew and I took turns interrupting our activities to put them back to bed. We both may have thought about adding "shackles" to the shopping list, it was that bad.

They finally fell asleep (or at least stopped coming out of their bedroom) for President Eyring's talk. Benjamin was still going strong, so I stood there, bouncing him and trying to pay attention through his squawking  And then President Eyring started telling his daughter's story (at 4:48).

His daughter, pregnant with her third child, was at home with her three-year-old while her five-year-old was at school and her husband at work when she began to bleed. (Obviously I was fully invested in the story by this time; I didn't even have to try very hard to relate to the story because her story was so similar to mine so I was invested without even trying.) She called her husband and they decided that she would call an ambulance and he'd meet her at the hospital. When she hung up the phone, her visiting teaching companion was there at her door because she'd simply "felt she ought to come by" and listened to that prompting. A beautiful orchestration of service began and by the time President Eyring's daughter had delivered her baby (by cesarian section) she was assured that all her temporal needs—childcare, meals, rides, etc.—would be met.

I can't tell you what a beautiful blessing that was for her (and is for her since her baby was 14 weeks early and was only born last month I imagine she's still stuck in the NICU) but I can say that we worry a lot about temporal things in this life for the simple reason that life is temporary.

President Brigham Young counseled us to "attend strictly to those things which we call temporal...otherwise your faith will be in vain,"* and Alma 34:28 says, "if ye turn away the needy, and the naked, and visit not the sick and afflicted, and impart of your substance, if ye have, to those who stand in need—I say unto you, if ye do not any of these things, behold, your prayer is vain, and availeth you nothing, and ye are as hypocrites who do deny the faith."

For me, the question of why it's important to fulfill temporal needs is answered simply by looking at Maslow's Hierarchy of Needs. Basically, unless the "deficiency needs" (esteem, friendship, love, security, physiological needs (food, water, shelter)) are met, it is very difficult to find the motivation to become "self-actualized," or (for the sake of this discussion) spiritually minded.

As a side note, I would argue that forgetting your needs and focusing on the needs of others would also help improve your own spirituality. After all, the widow's mite was a grander gift, though it was a pittance compared to what the wealthy men were offering. She was poor yet found a way to give. But, all that aside, I don't know how I would have survived the whole NICU experience if I had to worry about what to make for dinner every night or worry about coordinating sitters for my children every day. Every act of service I received was a tender mercy.

Any time a service is rendered it gives both the giver and receiver time to ponder their spirituality—why we serve others, why we deserve to be served, and how that improves our relationship with our Heavenly Father. Both serving others and being served myself have both given me a deeper understanding of the atonement. Serving others has obvious connections to the Savior: "Inasmuch as ye have done it unto the least of these my brethren, ye have done it unto me" because "when ye are in the service of your fellow beings ye are only in the service of your God." Service opens your heart to love others as you love yourself, and as you love God. It broadens your appreciation for what the Savior did for you. And, let's be honest, it gives you warm fuzzies.

Being served helps me to recognize God's miracles in my life. So often my prayers have been answered through the service of others. I am not sure that those doing acts of service ever realize their impact or even feel like they are doing a "big" thing at all, but I do know that when you have a prompting—like going to visit a friend, as the visiting teaching companion in President Eyring's story did—you should follow through with it because as small as that deed may feel to the giver it has potentially far-reaching blessings in the life of the receiver. Not only in a temporal sense but also in a spiritual sense.

I have a feeling I'm tripping all over my words and obviously I need to give it more thought, but I do believe that we are sent to earth to figure out God's plan for us and then to carry out his plan—to do his will. He wants us to be happy. He wants all of his children to be happy. That's why we're commanded to serve others. We serve him by serving others. Service is a testimony of God's love.

I'm so happy to be a part of the Relief Society and to be getting to know the wonderful sisters in my new ward. They are amazing at serving; I can already tell. Did you know that they're organizing six weeks of before-and-after-school care for a woman in the ward, not because of any tragedy in her life but because she got a new job that will have good hours for depositing and collecting children to and from school but has six weeks of training when her schedule is completely inflexible. Six weeks. They're sending around a calendar and people are just signing up for AM and PM shifts. She hasn't had to wonder who will be tending her children; it's just being taken care of. And that's huge.

Last week Andrew taught primary and Miriam was sick so I had both Miriam and Benjamin with me in Sunday School. Miriam had to go potty toward the end of the lesson so I took her and Benjamin out and left our things scattered up and down an entire row. I had just opened the door to head into the chapel when I was met by a woman coming out of the chapel...with my diaper bag all packed up and ready to go. That was huge for me. Huge.

They've been such a wonderful example to me, and I hope that I can learn from them how to be "always ready with willing hands and tender sympathies to perform deeds of love and charity."*

Without the sweet Relief Society sisters in this ward and in my previous wards, I would be completely lost...or at least much more frazzled than I am with them by my side. Relief Society truly is an amazing organization.

On a lighter, unemotional note, I think it's funny that these monkey outfits were gifted to Benjamin, who really is a little monkey, at least if you look at his hands. You can get a good look at his hands here: 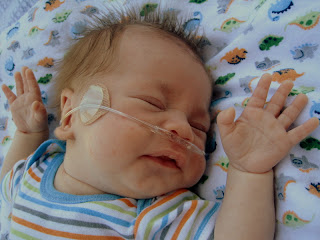 He's got a single transverse palmar crease in each of his hands, also known as simian creases due to their presence in "non-human simians," or, to put it simply...monkeys. Benjamin is part of the 5% of the population of the world that has a simian crease on each hand (10% have it on one hand). It was a little scary when the doctors pointed out this little trait to us because simian creases are often a characteristic of chromosomal or other medical issues. When the doctors peeled back Benjamin's little fingers to show Andrew the crease and uttered the words "may be a sign of Down's syndrome," his heart skipped a beat and after he shared that tidbit of information with me (I was still at the other hospital when Benjamin's simian lines were noticed) we both worried about it for a while. It wouldn't have been the end of the world—and if fact would have been fine, if not wonderful—but it seemed just another scary complication to worry about at the time.

Benjamin just has weird hands (the doctors ran a chromosomal pannel (or something) that revealed no abnormality), so we'll be able to relate well together. Though hopefully he doesn't get my thumbs, too.

* for reference see: Daughters in My Kingdom
Posted by Nancy at 11:01 PM