I suppose I'll hop on the bandwagon and formally declare myself as a participant of NaBloPoMo 2012. After my world fell apart in June I've been having trouble keeping up with the blog. The kids keep doing funny things that go unrecorded and we've done so many things that have gone unmentioned. We're certainly keeping busy; the record's just shoddy. As Andrew said, this will get me "back on the horse." While there's always something to write about everyday the challenge is in finding the time to write everyday, but here we go! My friends Bridget and Crystal, and my mom are all doing it—are you?

Tomorrow Benjamin will be five months old. I won't even tell you how difficult that is for me to believe because you can probably guess. I remember time just dragging when Rachel was a baby. Now time is rushing by. I can hardly keep up with the days of the week, let alone remember how old my children are.

I remember asking a friend once how many weeks her baby was, back when I had one sweet baby who was around seven weeks old. My friend looked at me and said, "I have no clue!"

Not knowing was not something I could fathom until I was talking to a friend at book club (last week? or the week before that? who knows?). She has a sweet little girl right around Benjamin's age and she asked me, "So, wait—how many weeks is he now?" I looked at her and smiled. 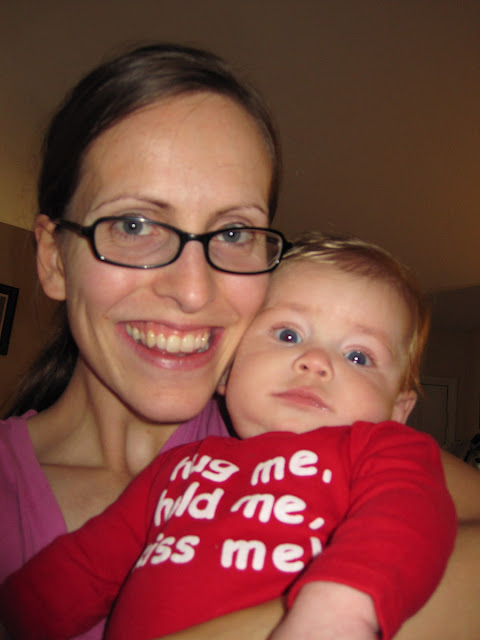 Tomorrow, though, this boy will be five months old—I know that for a fact—so allow me to gush over him for a few minutes.

At five months, Benjamin is finally beginning to exhibit emotions. For so long his emotions seemed to be awake and asleep. Then he added screaming to his repertoire. Now he's quick to smile, eager to giggle, and a glutton for attention, squawking and shouting at people who might not be making eyes at him. 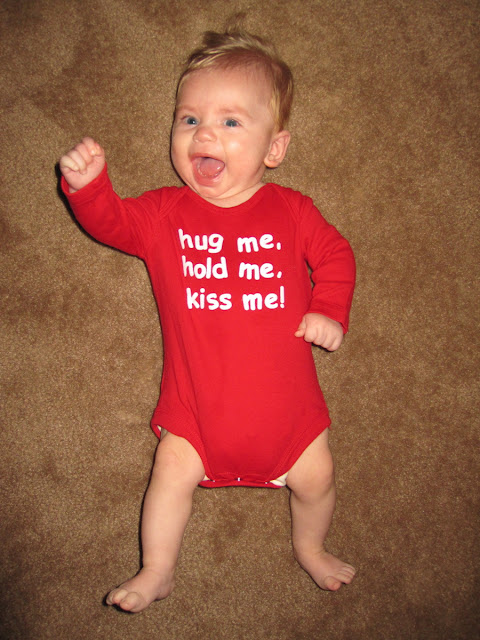 He's gotten rather grabby lately, and not just with hair—today he got his fingers in the jar of ginger I was measuring out of (because sometimes the only way to make pumpkin snickerdoodles is to do it while bouncing a baby on your hip, a three-year-old pulling down your pants (remind me never to go shopping for pants six weeks after having a baby because later there will be six months after having a baby), and a five-year-old spilling flour all over the kitchen as she over-vigorously stirs the dough). 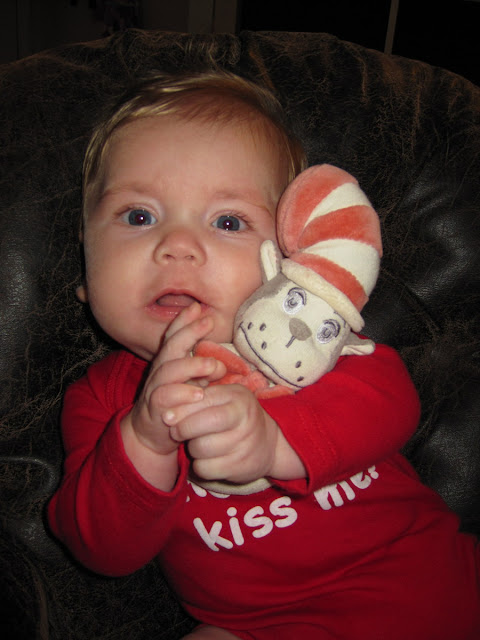 He doesn't seem very interested in any toys other than his little baby gym but he loves to grab blankets and suck on them. He loves to suck on fingers, too, but no matter what I try he still thinks that pacifiers are the counterfeits of the devil. 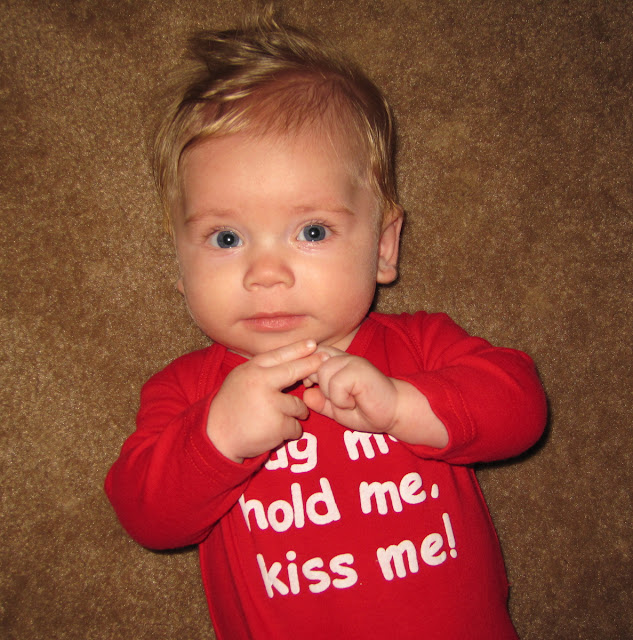 He's getting much better at sitting up and even enjoys standing, too, though he needs support with both those activities. 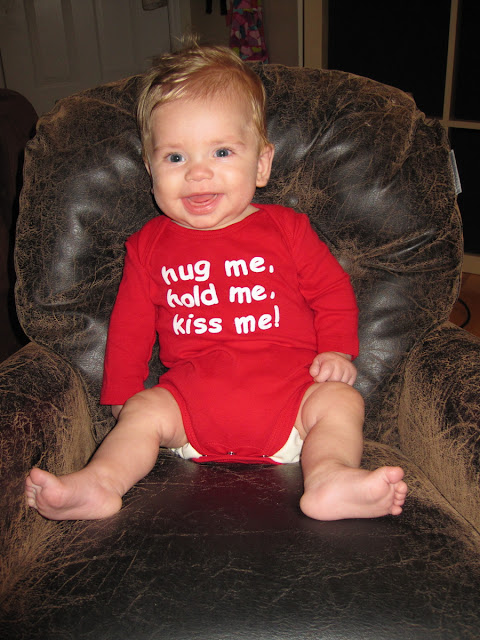 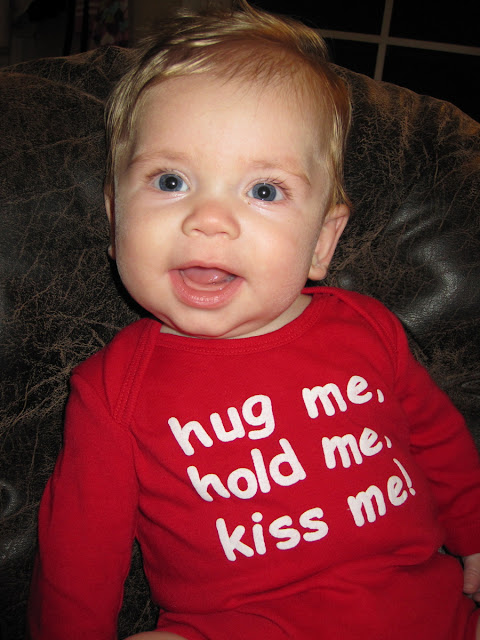 His little eyes follow me wherever I go, though if you really want to see his face light up you should see Daddy enter the room. 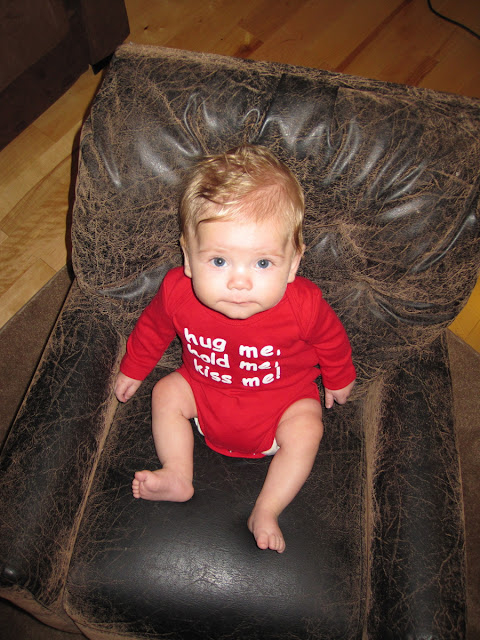 He doesn't suck his thumb very regularly (though Miriam assures me that he will). He can self-soothe though will usually try crying for a few minutes before entertaining himself just to see if anyone will rush to his aid. Often someone will. 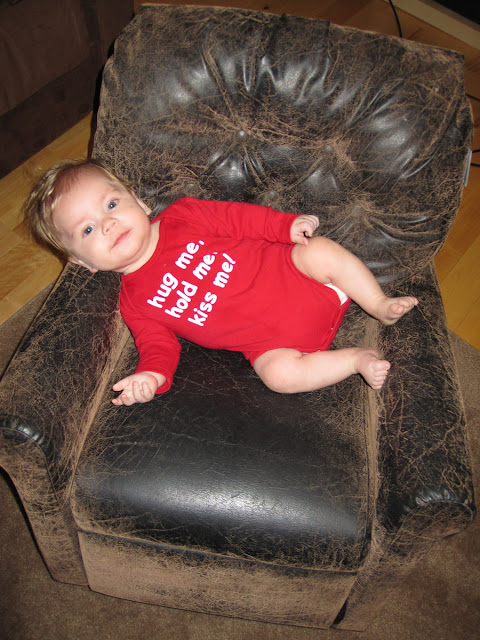 I was just told by a woman in our ward that younger children are spoiled by nature because their older siblings relentlessly dote on them. I suppose that's true to a point, but wouldn't an only child be just as spoiled with the undivided attention of mom and dad? Also, it's a bit of a treat to have reached that stage of life where the older ones actually help take care of the younger ones. Miriam's a pro at entertaining Benjamin and Rachel loves to hold him after she gets home from school and makes sure he does his daily "sitting practice" and "tummy time."

Rachel was so funny when she saw him in this shirt.

We sounded out the rest of it together.

"Hug me, hold me, kiss me! Okay—Miriam, you hug him; I'll hold him; Mom, you kiss him!" she instructed, as if his shirt was actually issuing commands.

Benjamin sure does love kissing, though! Peppering his chubby cheeks with kisses is a surefire way to get him to laugh. He kisses back, too—if you're not careful he'll grab your face (with his razor-sharp baby claws) and plant a slobbery, tongue-happy kiss all over it! 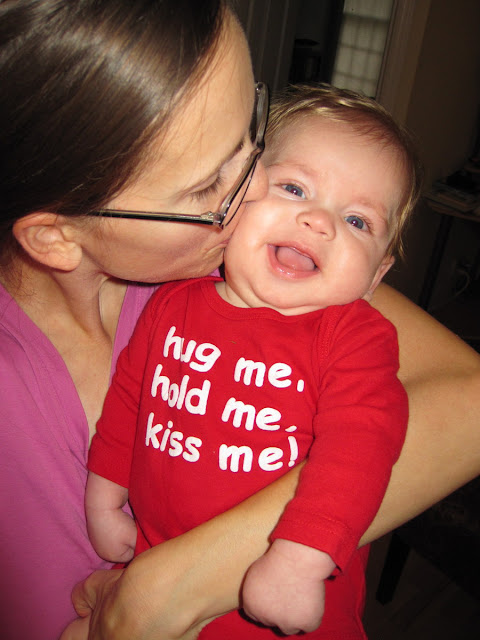 He loves to read, though not usually to himself. 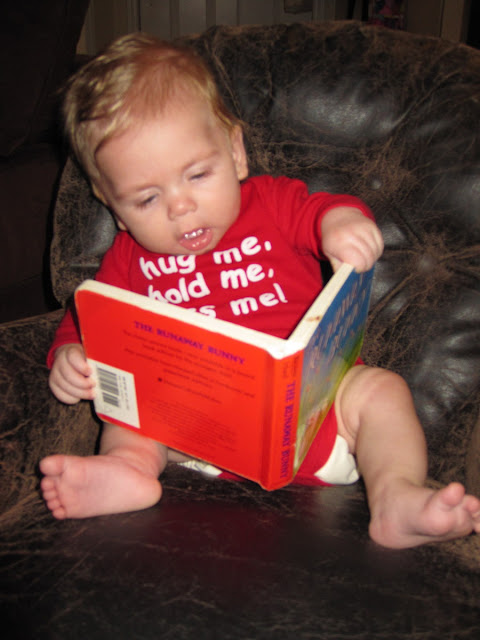 He will sit through story time as long as there are pictures in the book. Story time just keeps getting longer and longer. Miriam enjoys The Little House on the Prairie series but she prefers picture books still, as she should, so we read a picture book for her, sometimes two (or three). Rachel insists on picking the same number of picture books that Miriam picks but also that we read a chapter from Little House. Sometimes I read to them as long as they're interested but other times I put my foot down and will only read a picture book or Little House. It all depends on my patience and how close bedtime is. However story time swings, I usually end up reading from The Little House either standing up and bouncing Benjamin on my hip or while he's nursing because he doesn't have the attention span for it (go figure). 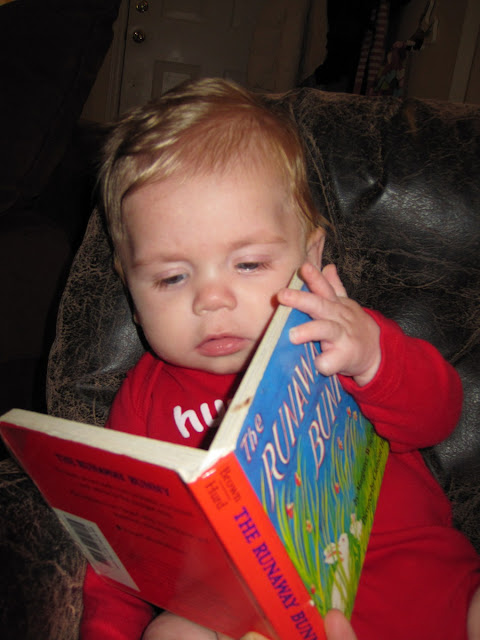 Benjamin has a motherlode of onesies. He's sorely lacking in the pants department, however. This wasn't a problem this summer because it's perfectly acceptable to run around without pants on when you're under the age of one and it's 90 degrees outside. It's not so acceptable now that it's like 50 degrees so I try to keep the boy covered up. He's got a few pairs of pants that fit "well enough" but are still too big that they're comical.

Here he is in a milk coma, sporting Steve Urkel inspired jeans: 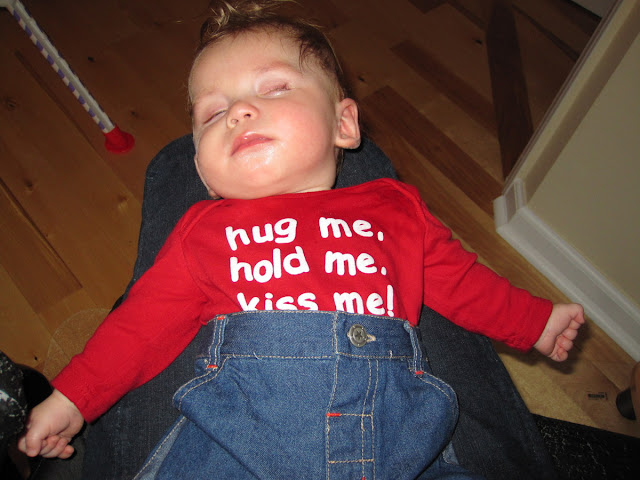 He's growing so fast that they'll probably fit him in a number of weeks, if not days.

Benjamin is truly a joy to have in our home (even when he's screaming uncontrollably (which is something he does often (but don't worry; it gets better))).
Posted by Nancy at 11:48 PM