The Waltz of the Snowflakes

Andrew is very strict about the window of opportunity for Christmas celebrations. Under his regime we can ring in the Christmas season as soon as Thanksgiving dinner is in our bellies. He's a veritable scrooge about any holiday revelry before the pumpkin pie has been sliced. No Christmas music—no humming, whistling, or singing any song with even the remotest ties to Christmas. No Christmas stories. No Christmas shows. No asking questions about the names of Santa's reindeer. No drawing pictures of elves. Nothing of the sort.

For years he's been chiding me for whistling Jingle Bells a few weeks too early. And for years I have been bringing every bit of pre-Christmas Christmas to his attention just to get his dander up. I even have a song I sing when I spot Christmas lights that are turned on "too early." Do you want to hear it? It goes like this (sung to the tune of Jingle Bells, naturally, in order to add insult to injury):

That's about as far as I've written because Andrew inevitably interrupts me screaming, "Stop! Stop! Stop!"

I'm not sure how much the pre-Christmas season actually bothers Andrew, but he's certainly been pigeon-holed into the role of Christmas Season Enforcer and the children and I sure do enjoy flaunting the rules to get him to throw a "fit."

This year he was the first one to break the Christmas rules when he "accidentally" allowed the girls to check out a Christmas story before that was "permissible."

Next, our friend Crystal and her kids sent us a package with Andrew when he came home from Indiana (he stayed at Crystal and Jason's house). The goodies were in a huge stocking that the girls simply couldn't resist climbing into. 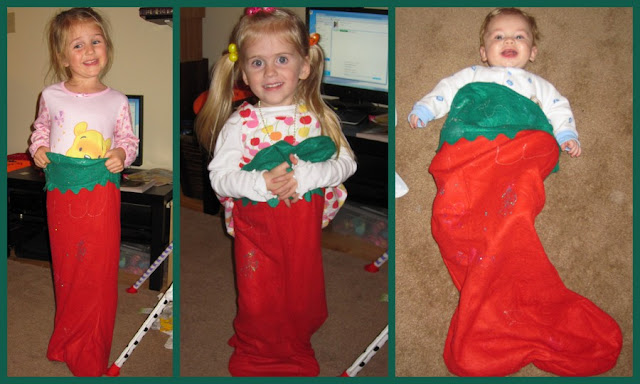 When they were finished playing in it we hung it on the wall and then danced around like wild hooligans, singing about the joy of Christmas while Andrew chased us around the house. 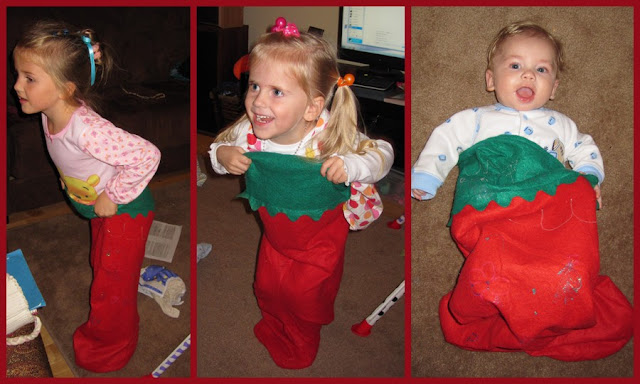 I will admit that while he was away in Indiana I poisoned the children with the Christmas spirit. I let them check several Christmas books out from the library. And then we read them. I also allowed them to watch the Christmas episode of Angelina Ballerina—the one where they go to see the Nutcracker—and then I turned on the Nutcracker for the girls to dance to themselves.

Somehow someone made a shortcut to The Waltz of the Snowflakes on the desktop. Later Andrew clicked on it to see what it was and was instantly hooked. It was like his gateway drug to Christmas. He couldn't stop listening to it.

"I don't think I've ever heard this song before!" he said. "Listen! There's singing..."

He began to hum along.

"Yeah!" I said, racing in from the kitchen to join our seven-year long battle, "It's from The Nutcracker! It's totally a Christmas song...and you're humming it!"

"Doesn't matter," I said. "It's Christmas You're breaking your own rules."

"It's not Christmas music!" he argued. "It's just plain ol' Classical music...that happens to be played at Christmastime."

Our friendly debate continued at the dinner table. Finally, I put it to a vote.

"Everyone who thinks The Waltz of the Snowflakes is Christmas music, raise your hand," I said.

Three hands went up into the air: mine, Rachel's and Miriam's. Benjamin hasn't yet obtained suffrage (under current Heissatopia voting laws you have to be able to raise your hand in order to cast your vote) otherwise he would have sided with us, I'm sure of it.

"What?!" Andrew cried. "You can't call a vote with preschoolers—their opinion doesn't count! They don't know enough about life to tell the difference between what's Christmas and what's not!"

Apparently he's unaware of the suffrage laws in Heissatopia, but if it was a consensus of the educated he was after I had the perfect way to give it to him. I opened our debate on Facebook. 43 comments later, I tallied the results:

An overwhelming majority (30 individuals) agreed that it was Christmas music, citing Christmas CDs, wikipedia, playbills, and so forth to prove that it was clearly a Christmas song.

Later I lit the microwave on fire and Andrew wrote about it on Facebook. Our friend Todd's comment totally made my night: 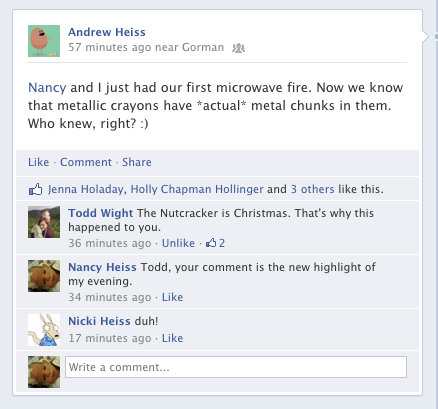 A few hours later Andrew's friend David would write, "So don't eat one before an MRI. Got it." And that also made me smile.

As pro-Christmas as I am before Thanksgiving I tend to slam on the breaks after Thanksgiving because that's when Andrew lets loose all the excitement he's been holding in. As soon as Thanksgiving dinner is over, he almost races to turn on the carols and bust out the Christmas decorations.

This year our tree went up the day after Thanksgiving—right on schedule according to Andrew, but a little early according to me. See, in my house growing up we could sing Christmas carols in October if we wanted to but the tree didn't ever go up until mid-December. Andrew wants it up as long as possible, as long as it falls within his defined Christmas season, which means it goes up right after Thanksgiving.

I sighed a little when he started setting up the tree.

"What?" he asked. "Aren't you excited for Christmas?"

"Yes," I admitted. "But I'm the one who has to keep the kids away from the tree all day long, not you."

"Benjamin's not mobile yet and Miriam's pretty gentle and Rachel's at school all day. It'll be fine!"

And up went the tree. 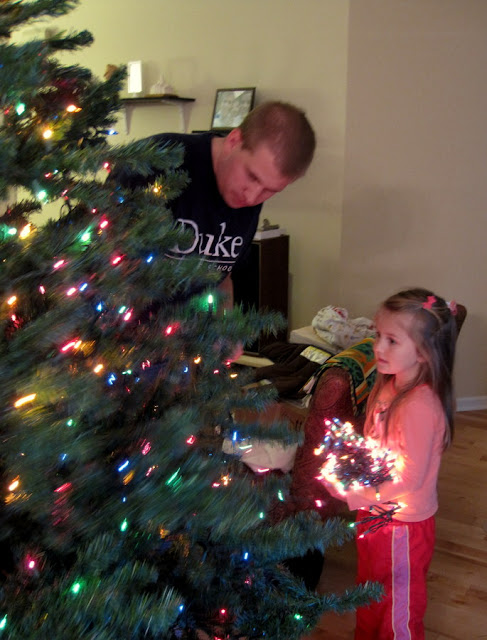 We ate dinner after we set it up and had the lights on and then Andrew ran off to find an extension cord, while the girls and I (but mostly the girls) put the decorations on. 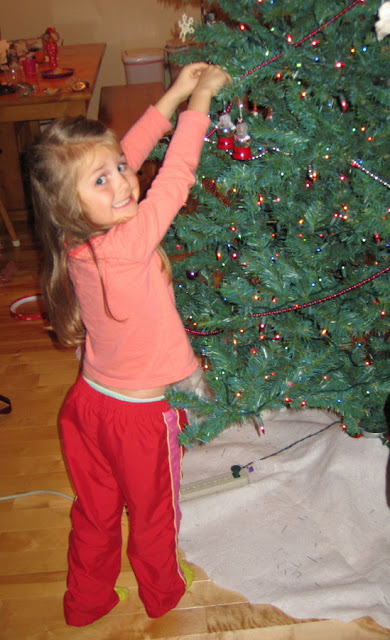 We only broke one ornament—it smashed to pieces and the glass went flying all over the floor and I looked at Andrew as if to say, "I told you so," but I didn't...I just swept instead. In a way I suppose it was a blessing that the ornament smashed (it was Miriam's fault; she knocked it off the table) because the girls knew I was dead serious when I told them that some of the ornaments were glass and that if they played with the tree they were toast.

The tree was a little bottom-heavy, with three or four (or more) ornaments on each branch below three feet. 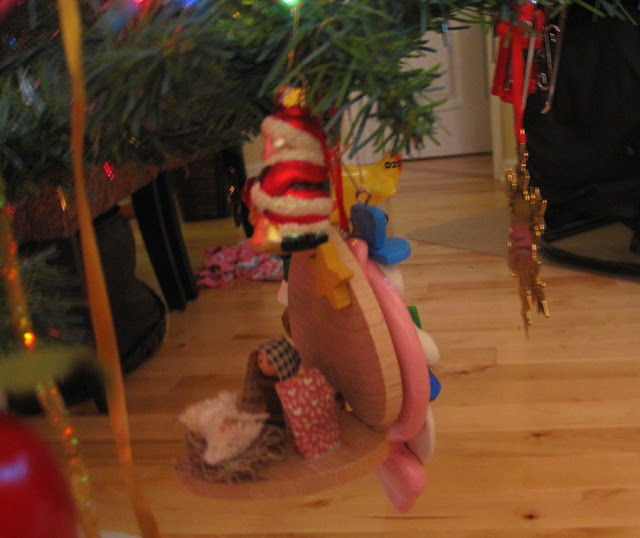 The girls had a wonderful time putting the ornaments wherever they wanted (and then I evened things out vertically after they went to bed). 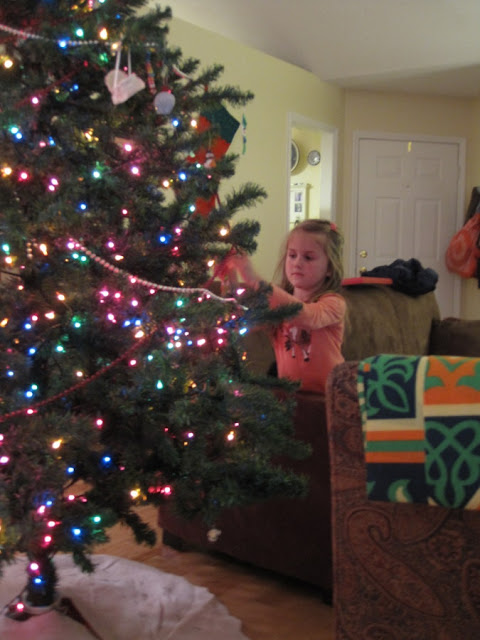 While we were decorating, Andrew threw on some carols—an album he had purchased on Amazon a couple of years ago called, "99 Essential Christmas Songs." You should have seen his face when The Waltz of the Snowflakes came on.

And then we all hummed along as we finished trimming the tree. 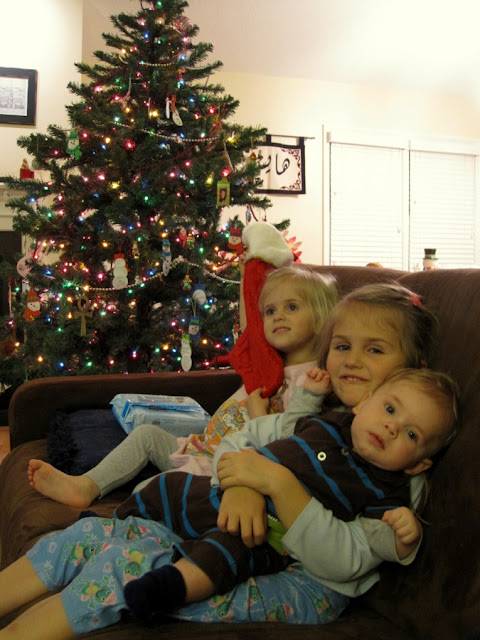 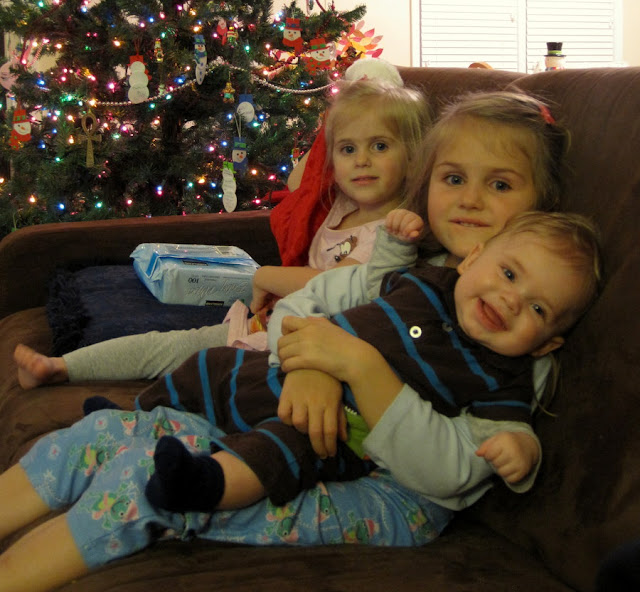 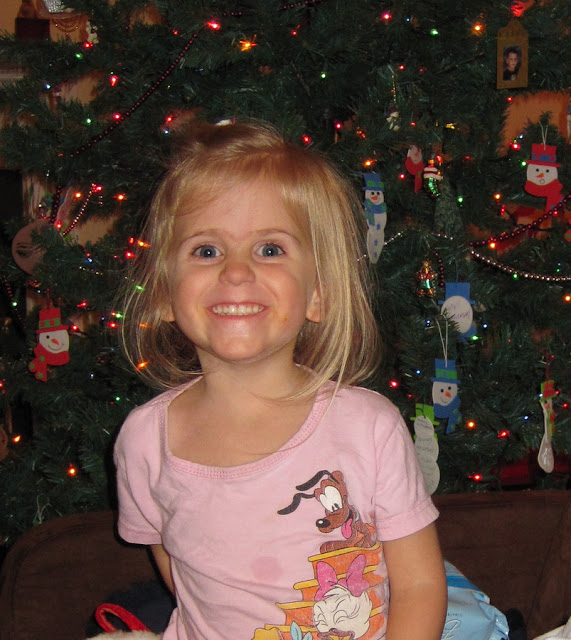 I remember years and years ago (like, in High River—that long ago), my mom and I were discussing the fine art of raising difficult teenagers. It's kind of a funny topic for a conversation when you realize that at this point I was a teenager. But I wasn't a difficult one, I don't think. At least, I wasn't too difficult...

Anyway, she mentioned that she had read somewhere or heard somewhere that if you have a rebellious child who wants to break all the rules that you can pick something to harp on that's rebellious enough for the child to feel rebellious but not rebellious enough that you actually care about. For example, you can whine about your child's scraggly dreadlocks, or whatever, to make them feel like you're annoyed (when you're really not) so that you can perhaps work through some deeper issues like being sure they don't play with drug dealers.

I don't quite remember how this reverse psychology works (like how does "letting" your teenager grow their hair long prevent them from doing drugs) so I must not have absorbed everything my mother said but I can't help but feel like that's kind of what Andrew and I have going on here.

He pretends pre-Christmas celebrations are a major pet-peeve of his and I needle him about it and we have such fun doing it that we never end up noticing our actual pet-peeves because we're too absorbed in the battle over the length of the Christmas season.

I don't know if any of that made sense.

Anyway, the Christmas season is upon us no matter what way you look at it now (according to Andrew, anyway, I might be able to put it off until December...) so we may as well enjoy it!
Posted by Nancy at 12:26 AM