She's a dancing star! She loves to twirl all day!

Yesterday morning the girls got all decked out to play Angelina Ballerina; it was Rachel's idea and I was thrilled about that because this one time I praised Miriam as being "a natural" dancer and Rachel overheard me. She assumed that I meant that Miriam was a good dancer and Rachel was not. For the past few months whenever anyone's mentioned dancing Rachel has answered with something like, "Oh, I'm not a very good dancer, but Miriam is!"

It hasn't seemed to matter how many times I've told her since then that she's a fine dancer, she's refused to dance. So you can imagine my relief when it was she who suggested that they play Angelina Ballerina. 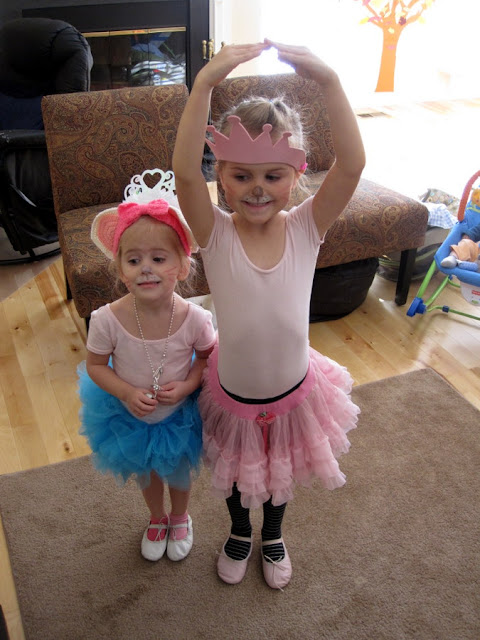 Rachel's kindergarten teacher, it seems, moonlights as a ballet teacher. This has renewed Rachel's interest in dance because she adores her teacher.

"Will you teach me some ballet?" Rachel asked.

It's true. I never took ballet. I never had a leotard. I never had ballet shoes. But I think I really would have enjoyed ballet. Instead I got a community "modern dance" class and always seemed to be partnered up with a girl who sucked on (not just her thumb but) her whole hand. And I've never been a fan of modern dance; I've always loved more classical things—I wanted to learn steps with names. Give me tap! Give me ballet! Give me ballroom! I will shuffle step, padabure, and chasse! Just don't make me imagine I'm a piece of popcorn getting ready to burst and expect me to think that's dancing.

I learned to dance later in life—Andrew and I met in a ballroom dance class in high school—so I can dance, but I've never taken a ballet class.

Thank goodness for the internet, though, right? I found a series of ballet "classes" online and the girls and I went through our plies, battements (both tendus and degage), and rand de jambres before the girls got bored and wanted to do some free-style dancing. 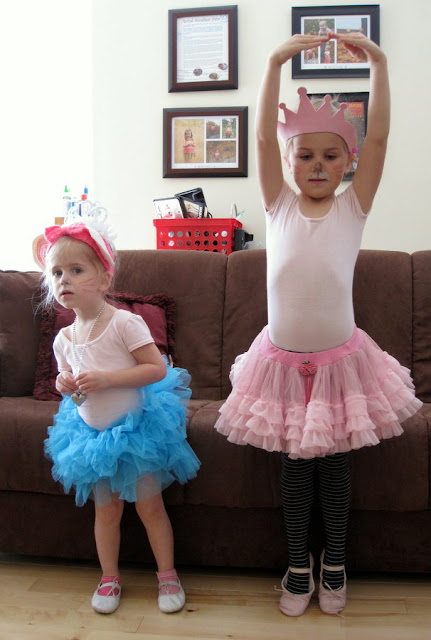 Even with Miriam's natural affinity for dance, Rachel is much better at following instructions and is much more coordinated so her movements ended up looking more "correct" than Miriam's did. Besides which, Rachel is also a bit of a natural dancer—she also has a hard time keeping her feet from tapping and her bottom from waggling when a catchy tune is floating in the air. 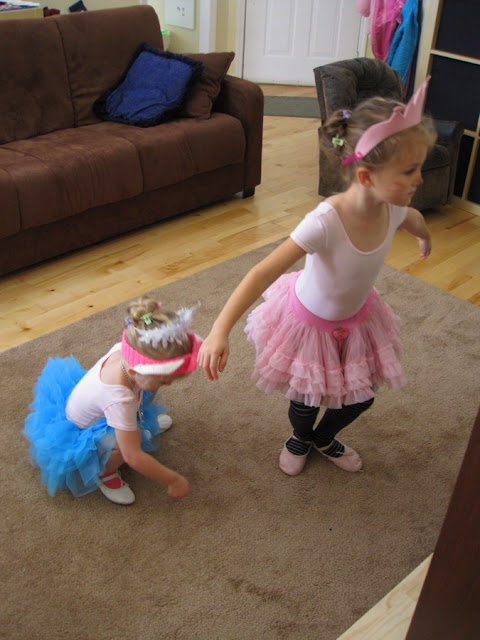 They've both been begging to take some lessons of sorts—gymnastics or swimming or ballet or...or...or...anything, really—and we'd love to put them in a class. We've been doing a bit of research, trying to find an affordable place that's within my driving bubble. We've explained to them that it's hard to put down roots in a new place—we don't know where any studios are so we have to look around before we can put them in classes. They've been patient. 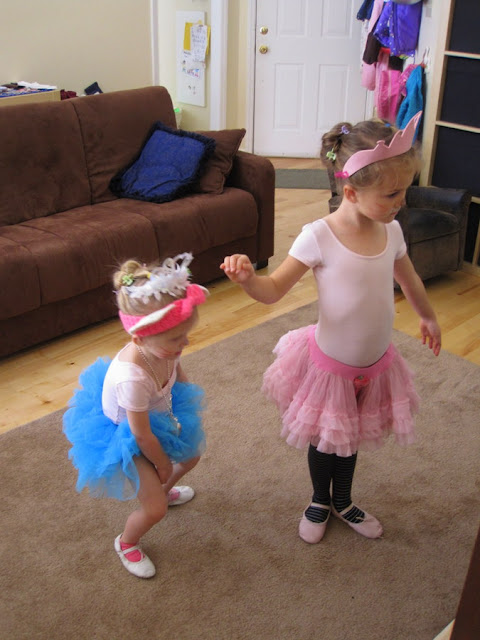 We've been thinking about signing the girls up for a class for Christmas—like, finding a place, paying tuition, and then giving the girls a certificate that tells them they're in a dance class or something. We have so many toys around that I'm not sure we need more, but at the same time I don't know if this is something they'd be excited about on Christmas morning. I imagine that they would be; and I like to think that I know them well enough to know they would be, but they're still little and have big expectations for Christmas, so a little piece of paper might not cut it. Maybe a little piece of paper and...new dance tights...or something like that.

Our "homeschool" ballet class was fun and we all learned a lot...or at least we all learned something. We're pretty confident in first, second, and third positions now, and though our plies are wobbly our battements are pretty good. Still, it would be nice to be in a real class. I suppose our first step is to find a studio. 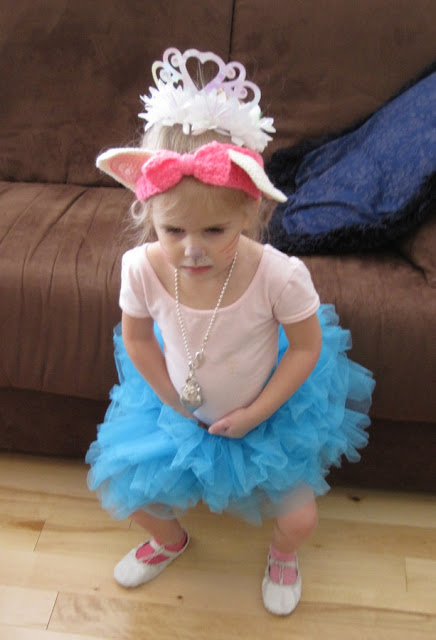 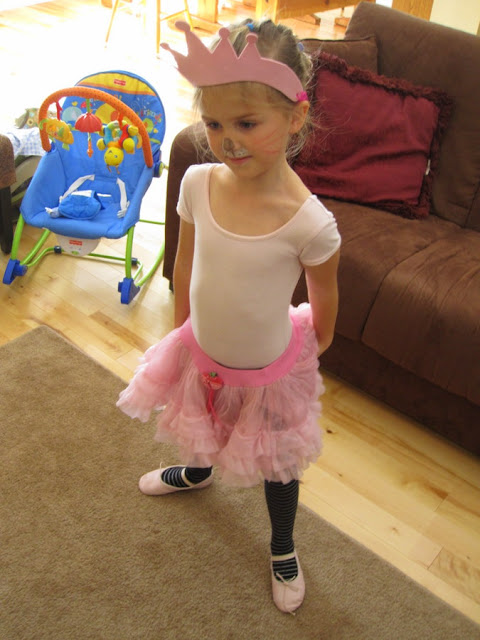 I also want to make sure that the girls are in the class they want to be in. Rachel seems to cling to our expectations of her—Andrew once mentioned that she seemed interested in science and her mind translated this to mean "daddy wants me to be a scientist," she's even gone so far as to worry about whether she'll be able to fit both "astronaut class" and "teacher class" into her schedule in college (because what if they overlap!?). She's really worried about college, this one. I'd rather have her explore her own interests instead of mine. 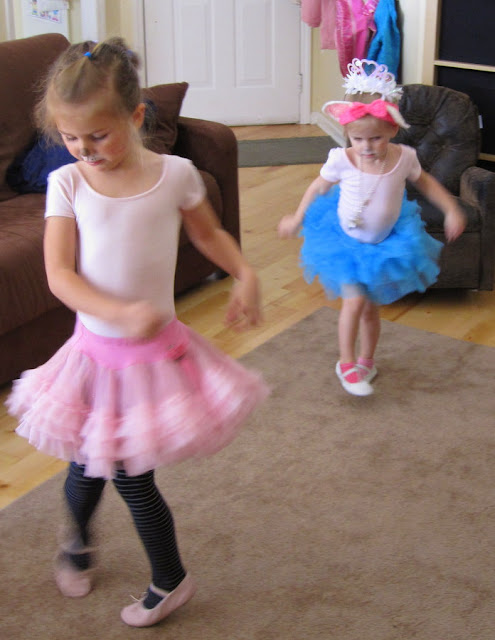 As Angelina would have us remember, "Follow your dreams wherever they take you! You can succeed, don't let anything shake you!"
Posted by Nancy at 9:58 PM