It's 11:45 PM on election night and guess what we were doing? If you thought we watched the election results, you're probably right...but only kind of because we don't actually have, like, television. Instead I mixed up some pumpkin bread, Andrew pulled up a website (NPR, maybe) that was tracking the election, and we streamed some more of the West Wing. To prove how irresponsible we are, or perhaps merely to help cool our nerves, we watched three episodes right in a row—up to the episode where President Bartlett is reelected president.

We turned off the show and checked the election results just in time to watch the president win Wisconson, passing the 270 votes he needed to be reelected president.

It was kind of wild to watch two great wins right in a row!

But you didn't come here to hear about politics, I'm sure, and as luck has it I have a very non-political and very happy story to share with you all: we fixed our van!

Andrew was pretty frustrated after he tried to take the door apart on Saturday. Of course we arrived home with only an hour to spare before nightfall so his time was limited. We didn't have the part we needed to fix the van, anyway, but he was feeling like van-fixing was a little out of his realm. I didn't blame him because even van-driving is out of mine.

"Thwarted!" he said, "In all my attempts to break the sabbath!"

So we did the only thing we could do: we bundled up in coats and hats and blankets and drove to church with arctic winds blowing through our window.

That might be a bit of an over-exaggeration. I have to admit that of all places to have your window break, North Carolina in November isn't a bad place. It's chilly but not freezing and though it rained while our window was out of commission it didn't storm hard enough to rip off the garbage bag that we taped over our window.

I asked a few of my friends around here for recommendations on car shops since the place we went to quoted us $300 to fix the window regulator. That was going to be a hard bill to swallow.

Did I ever mention that we spent every penny we had moving out here? That we didn't buy any groceries for the whole month of September because Andrew only gets paid once a month...on the last day of the month...and he didn't get paid in August? I don't know if you've ever tried to move and then not stock your refrigerator; it was an interesting experience, that's for sure.

He got paid in September and we paid tithing and rent and utilities and then went out and stocked the pantry because we were tired of using our food storage flour that had been packed away for four years.

The good news is I know that I can feed my family on the food storage we have. The bad news is that we apparently only had about a month's supply of food storage...and we ate that. But we'll build it back up again. Andrew got paid again, about a week ago, in October so we have money but we were hoping to not have to spend every penny we would have saved on fixing a silly window.

So we talked about it. I told him that I knew he was frustrated. And I knew that it was annoying to drive around with cold air filling the van. But, honestly—you can buy the part online for $50 and every tutorial we found said that it was an easy fix. We could try it and if we did it then we'd have saved $250!

Andrew agreed to this with the caveat that I find a place that would put in the part for us should we really bungle the job. So I called a place a friend recommended and they said they'd do it (you can never be sure; printing presses, for example, don't typically appreciate when you bring your own paper (just a head's up) but apparently car places are okay with bringing in your own parts).

"Here's the thing: Our window is broken; we figure it's the regulator. My husband wants to try to fix it by himself,"I said, leaving out the part where I begged my husband to try it again. "But he's never replaced a regulator before and so I was wondering if you guys would put it in for us if he happens to not be able to."

"Ma'am," he said, because everyone calls me ma'am here, "We'll do whatever you want us to do to your car as long as you pay us."

"And how much would you charge for a job like that?" I asked.

So we ordered the part on Monday and paid the extra $4 to ship it overnight. It arrived early this afternoon and Andrew was afraid we wouldn't have time to put it in so instead we set up the crib in Benjamin's room (which we weren't planning on doing until January but then I decided that it would make the room look tidier if we just bit the bullet and put it up and lo the room does look tidier) and that got Andrew into project mode.

So we bundled up and went outside—everyone except for Miriam, who was put down for a nap because she's sick...again.

Rachel and I wore the chullos Uncle Jacob picked up for us in Peru. 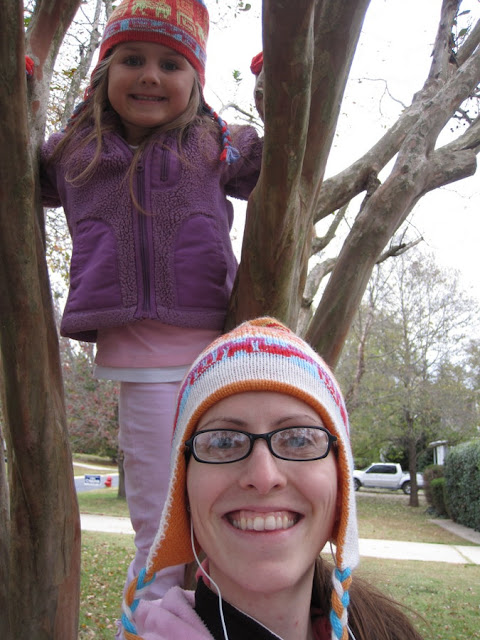 Rachel was excited that her hat matched her mittens so perfectly. 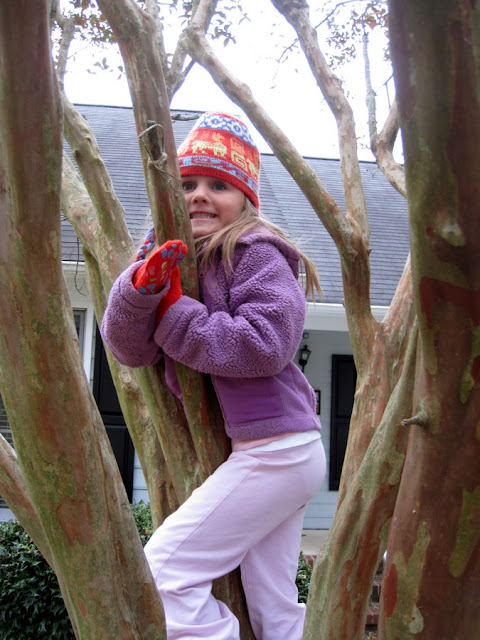 Benjamin found all our car talk to be boring. I don't think he'll be a mechanic when he grows up, which is a shame, really, because we could certainly use a good mechanic in the family. 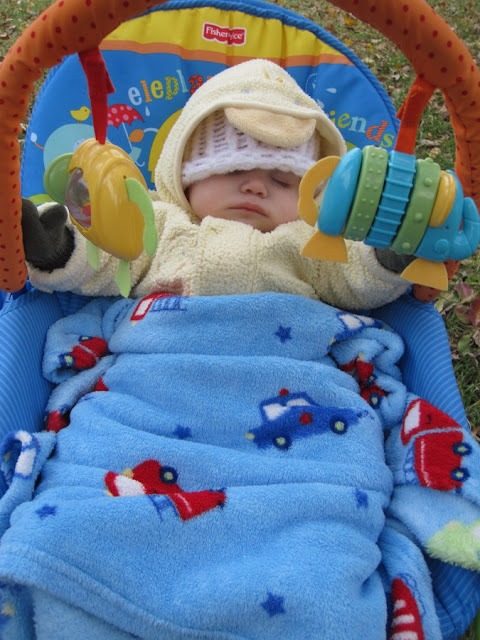 His face is too precious for only one shot. And I love how he fell asleep holding onto his toy bar; that's his favourite part about the toy bar—the actual toys, not so much interested in...but the bar holding them up is apparently awesome. 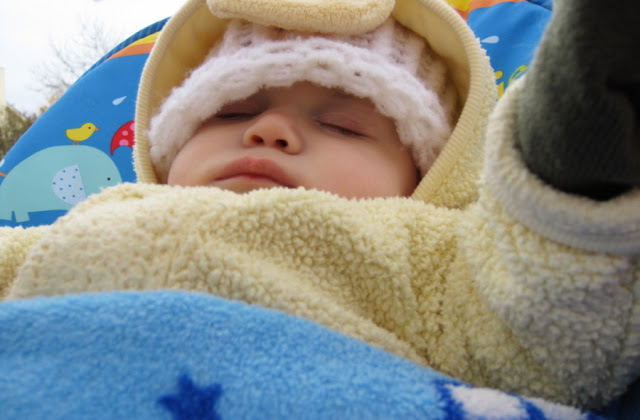 So, it took us awhile but (with the help of some guy on YouTube) we finally managed to locate all of the screws holding our window and regulator in, unscrewed them, and took both the window and the regulator out of our door. That's the first time our window has seen the outside of the door since Saturday (thanks, YouTube guy)! 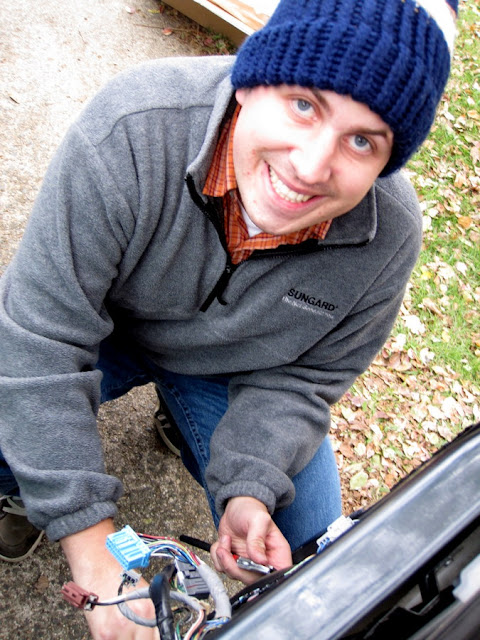 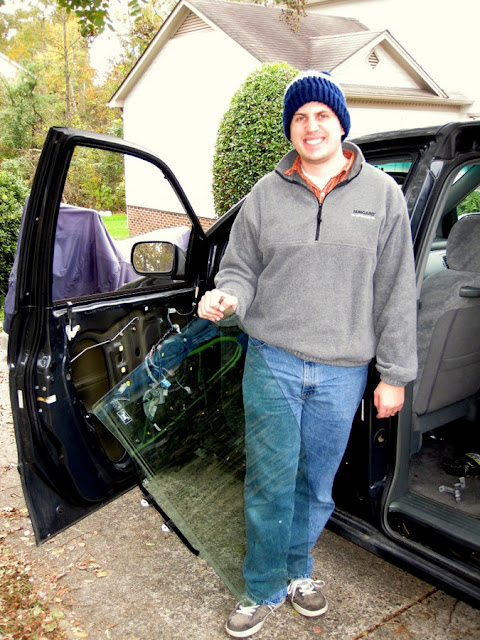 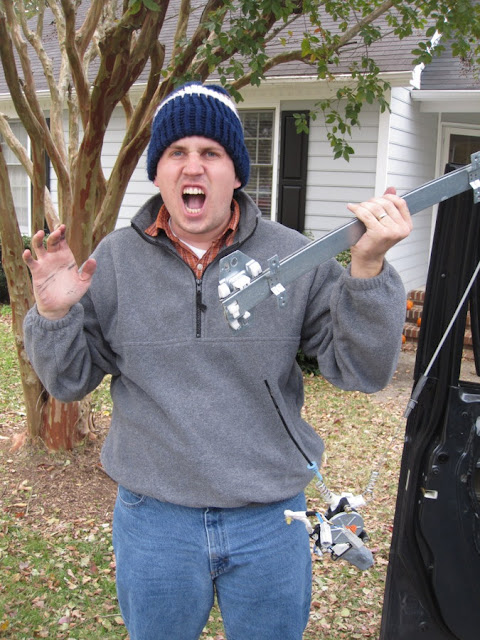 Our regulator had definitely bit the dust. The springs were no longer sproingy, some random part had popped off, and the cable was all bunched up inside the motor. 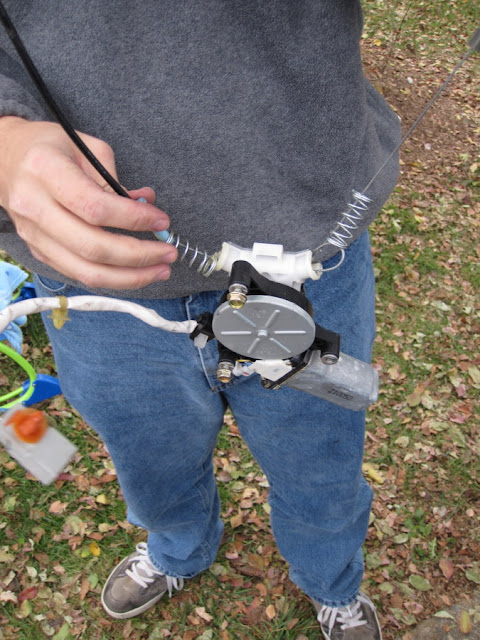 Putting it the new regulator in the door was much easier than taking it out because we knew where all the parts went this time and weren't in any danger of detaching something we shouldn't. We got it all hooked up and then wanted to test it before we put the facade of the door back on so Andrew hooked up the controls and...nothing happened.

But then I said a silent prayer and Andrew hooked up everything on the console in case there was some magic circuit that we weren't closing and apparently there was because this time the window worked. Hurrah! 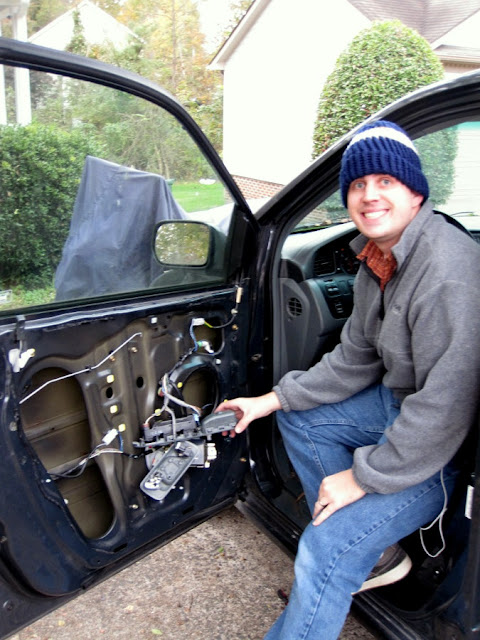 We were so excited we were jumping up and down for joy. We'd just saved $250 (but don't tell our van that because it's been a little high maintenance lately, requiring repairs twice in one week...come on)! 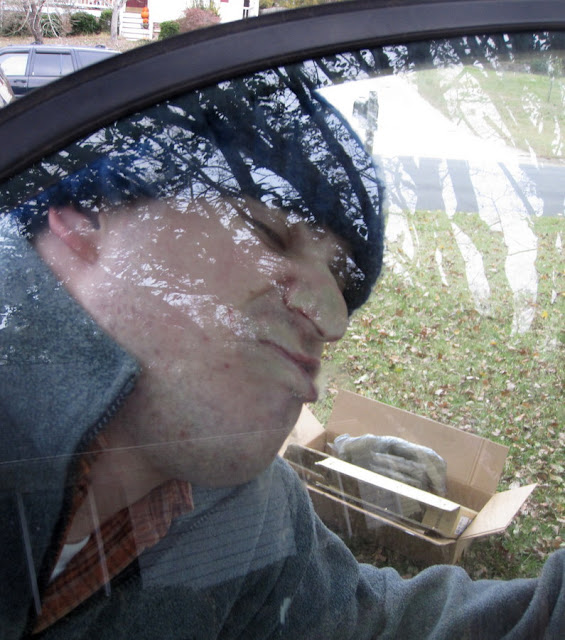 We kind of ran out of time to actually put the facade back on, but we were able to just roll up the window and lock the door instead of having to tape a garbage bag over the window and hope no persons of questionable morals noticed how insecure our vehicle was. 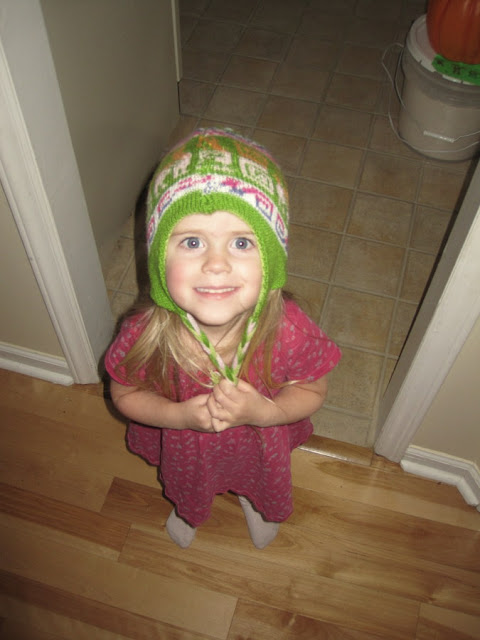 She joined us for celebratory drinks, and was quite happy to do so. 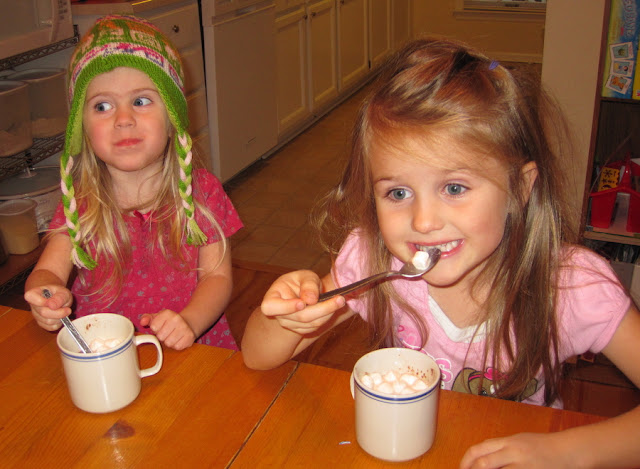 Nothing can prepare you for this next picture. Nothing. 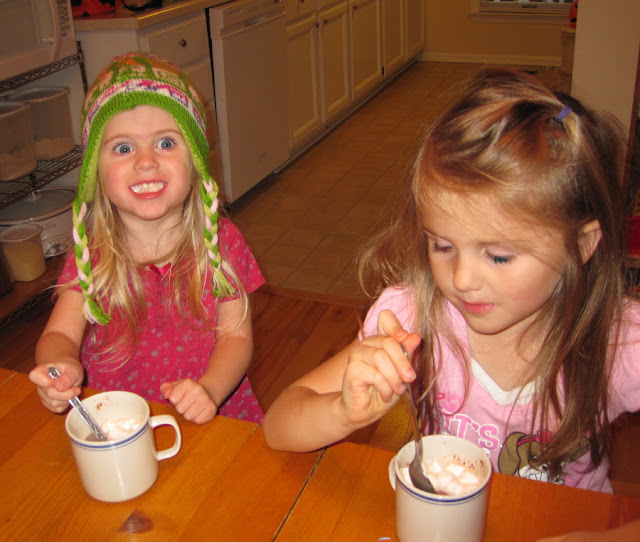 Andrew gulped down his boiling-hot chocolate (I grabbed a pot of boiling water from the stove and dumped it in the mugs; everyone else took half an hour to finish their drink I don't know how he did it in thirty seconds) and left for school, almost clicking his heels as he leapt down the front steps, overjoyed that he wouldn't have to drive home in the dark, in the cold, on the highway, with his window down all the way. 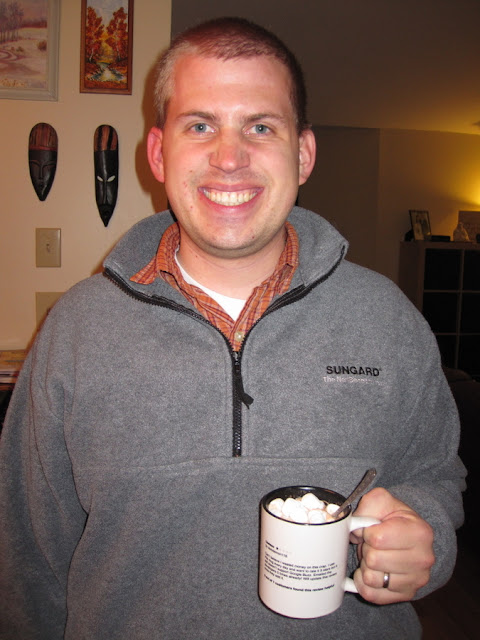 I fed the kids dinner, got them ready for bed, put a load of diapers in to wash, and read stories until Andrew came home. Then we had scriptures and prayer, patted our kids on the head, and sent them off to bed before starting our West Wing/2012 Presidential Election party.

It was a pretty good day for an election.
Posted by Nancy at 11:55 PM