The Hostess with the mostest

Relax—junk food will prevail. Hostess may have gone out of business—you might Wonder where you'll find your next loaf of bread (that was a real Zinger, wasn't it?) or if you'll ever eat another Twinkie but I assure you the world has not ended. How do I know this? Because Hostess has gone out of business before...and the world didn't end then. Why should it end now?

I'm about to tell you some lame facts that I read on Wikipedia so sit right back, grab some munchies and your favourite doll (which is, perhaps, also a munchy) and relax.


This (right up there ^^^) is a Hostess Munchy, one of three mascots for the Canadian Hostess company, which sold chips (not cupcakes). I won it at some school carnival when I was in grade five, I believe. And it was the first thing I ever won. And I was very proud of it. And my little brother named it "Chip Dude" because he recognized it as the mascot for Hostess chips. 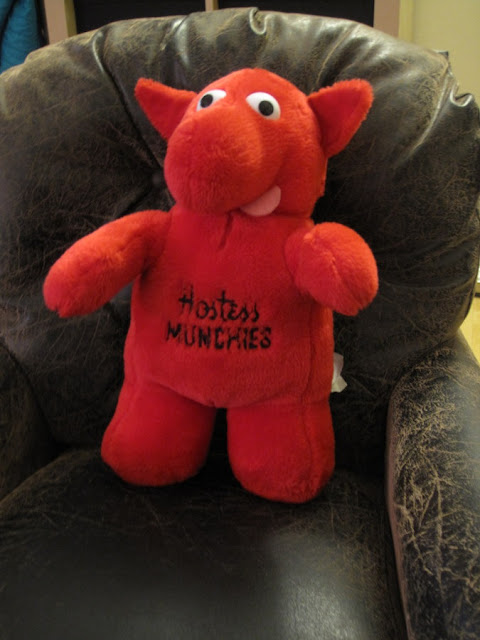 The Hostess chip company was started in "1935 when Edward Snyder began cooking chips on his mother's kitchen stove in Breslau, outside Kichener, Ontario," to regurgitate Wikipedia, but by the 1980s Snyder's chips had become the most recognized brand of chips nationwide (in Canada, that is). We ate them a lot growing up, and not only because my aunt and uncle had friends who grew potatoes for Hostess (and thus got their fair share of chip products (#fringebenefits)) but because they were good chips. They came in all the regular flavours you'd ordinarily expect to find on the grocery store shelves (but regrettably not in American stores) like ketchup and salt'n'vinegar. They also came in boring flavours such as sour cream and onion or barbeque.

They floundered for a bit in the 1970s when they tried to market orange, grape, and cherry flavoured chips, but soon realized that people liked their chips savory and invented things like sour cream and onion (which did much better in the market than...grape (duh)).

The Munchies trio were introduced in the 1980s and were featured on all packages of Hostess chips—the Snap, Crackle, and Pop of potato chips (though I don't believe The Munchies ever had specific names). Even with these cute little chip dudes dancing on their packages, Hostess began, once again, to falter. People preferred gourmet chips like Miss Vickie's (You guys: Sea Salt and Malt Vinegar...to die for!) instead of the cheap-o Hostess chips.

So Hostess was dissolved (was replaced with Lay's) and needless to say there are still chips in Canada.

I promise this does not mean the end of junk food in America. Life will go on. We will get fat in other, less Hostess-y ways. Until then, go forth—clear every shelf of all Hostess products (don't worry about me battling you over that last package of Ho-Hos; I've never been a fan) and comfort-eat your sorrow away.
________________

I'm truthfully more concerned for the 18500 people who just lost their jobs than I am about losing Hostess products, but this piece by the Huffington Post was quite touching (hint: sarcasm). Imagine if we got as passionate about, say, civil wars in Syria, airstrikes in Palestine, or massacres in Sudan as we did about Hostess treats!

Our media is really skewed.
Posted by Nancy at 10:13 PM