Today I learned about cigarettes

This was Rachel's journal entry for Saturday, November 24:

"I went to the Duke Hom Sed. Sigrres r bad."

That just about sums up our Saturday. We made it to the Duke Homestead and Tobacco Museum. I'm not sure what I was expecting but it certainly wasn't what I got. The whole museum seemed confused about whether it should laud or lambast the tobacco industry. It was almost awkward.

We got there just in time to watch the introductory film which went on and on about the farming, harvesting, curing, and auction of tobacco and how those things have changed through time. It talked about how cigarettes were "invented" and how they got better and better and better but then...we discovered tobacco causes cancer. So the city quickly changed its name from The City of Tobacco to The City of Medicine. The end.

I suppose it's justice that a large chunk of the Duke Endowment goes toward medicine since many people paid the Duke family money in order to poison their bodies. We, also, can thank the tobacco industry for our education, if nothing else, since Duke University was funded by the Duke family with tobacco money.

At one point in our little walk-through of the museum Rachel asked if all the workers at tobacco factories looked so sad because they knew tobacco was bad. 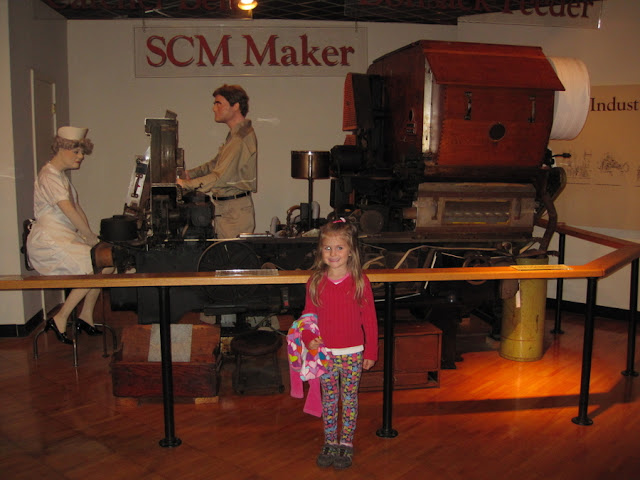 It was kind of funny. We told her the workers she was seeing (including the animatronic tobacco farmer) weren't real—they couldn't have emotions because they were plastic (but hello uncanny valley). We showed her pictures of actual factory workers, some of whom were grinning from ear to ear.

"How can they look happy doing something so bad?" she asked.

Ignorance is not always bliss. And talking about tobacco isn't always somber...

Just look at this authentic Indian statue carrying cigars. I was a little excited when I spotted this (mostly because of Calamity Jane (with Doris Day)). It's an artifact. I know this because the sign at its feet so helpfully reads "ARTIFACT—please do not touch". 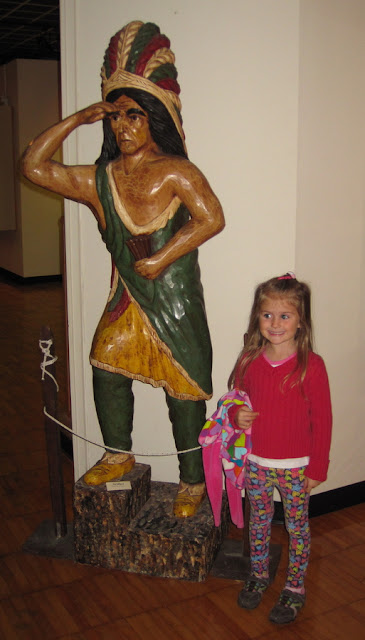 Then there's this replica of the Liberty Bell, made entirely of tobacco. 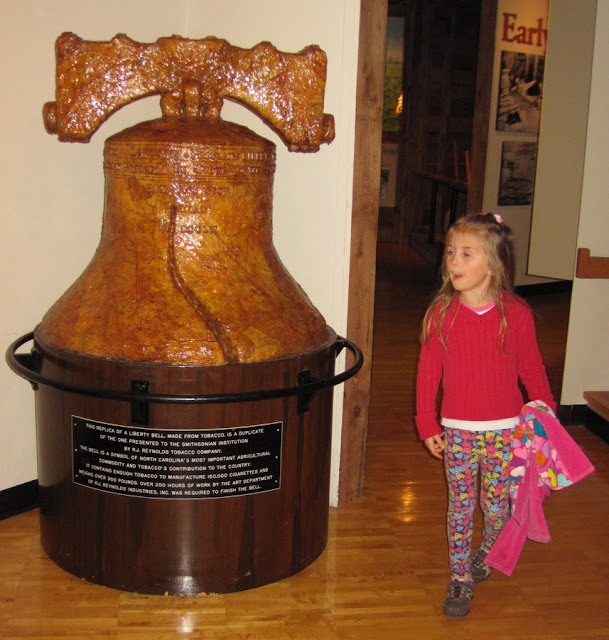 
This replica of a Liberty Bell, made from tobacco, is a duplicate of the one presented to the Smithsonian Institution by R.J. Reynolds Tobacco Company. The bell is a symbol of North Carolina's most important agricultural commodity and tobacco's contribution to the country. It contains enough tobacco to manufacture 15,000 cigarettes and weighs over 300 pounds. Over 200 hours of work by the art department of R.J. Reynolds Industries, Inc. was required to finish the bell.

It's like a weird chewing gum statue or giant ball of yarn...only it's a tobacco bell. Also, do you see what I mean about it being awkwardly laudatory toward tobacco? I suppose it's good that we aren't denying that tobacco played a role in our state's economy—as well as in the national (and dare I say global?) economy—but as fascinating as a bell made out of 300 pounds of tobacco leaves is...it's also kind of weird.

This tobacco vending machine was fascinating: 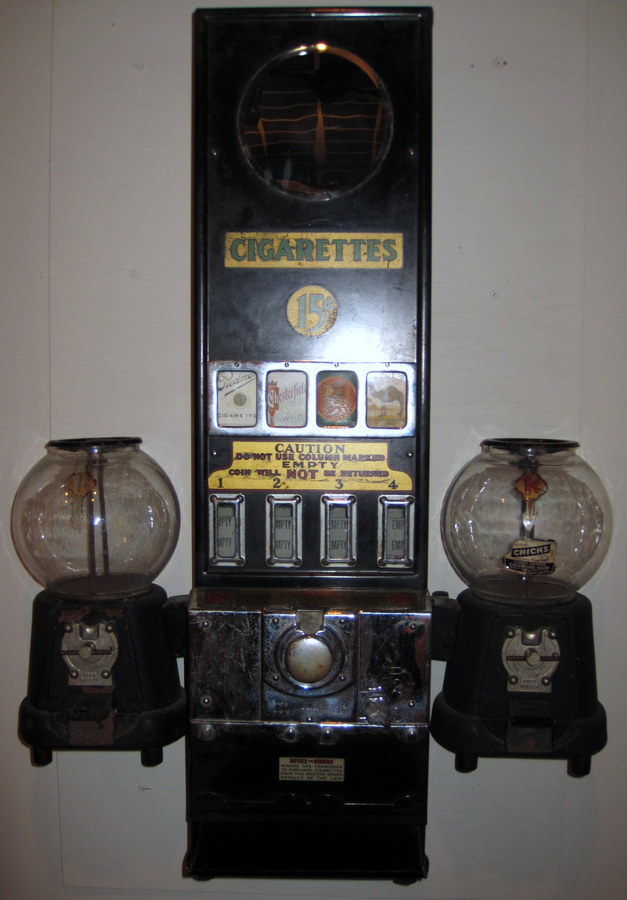 Your choice between gum balls (1¢) or a carton of cigarettes (15¢). There's a huge sign warning you to not attempt to purchase from an empty column because the coin return function of such machines hadn't been invented yet (apparently) and a tiny sign at the very bottom reminding minors that they aren't permitted to purchase tobacco.

There were a couple of other vending machines on display. I'm not really sure when those fell out of use in North America, though I do know that they're still around in Russia (or at least they could be found when I was last there (which granted was nearly a decade ago (how do these things happen?))).

When we rounded a corner and came face-to-face with this poster I actually laughed out loud. 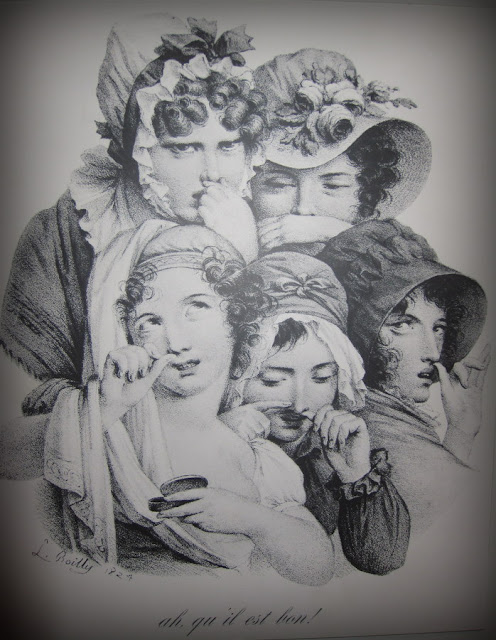 "Is that supposed to be attractive?" I snorted to Andrew. I feel as though the artist was trying to convince me of the feminism, refinement, and romance of snuff. The artist—L. Boilly?—failed, and thank goodness! Can you imagine if this was still stylish and dignified?

Across from this picture was a bunch of quotes from famous people denouncing tobacco. In 1604, King James (like The Bible) said that the use of tobacco is "a custom loathsome to the eye, hateful to the nose, harmful to the brain, dangerous to the lungs."

But just around the corner was a display lamenting the decline of the tobacco industry with a large sign reading, "This may be the last generation of my family to farm tobacco because..." with several sections titled things like "Machinery is too expensive" and "The auction hall just ain't as popular as it used to be."

In truth, tobacco is still farmed in North Carolina but all the farms have been privatized so all the small tobacco farmers either had to sign a contract with a major tobacco company or find a new profession. Downtown Durham used to be filled with tobacco factories—and it still is, but they've been refurbished into cute shops and luxury apartments. Tobacco's all but invisible 'round these parts. But the legacy of tobacco will never die.

Like I said, the whole message of the museum was a little unclear and...awkward. "Tobacco is awesome! ...not." I get that it was a Tobacco Museum. But seriously, why the mixed message?

Let me answer that question for myself because the answer just came to me: The museum is funded by tobacco companies.

It's like formula companies saying, "Breast is Best! But, here! Try this other stuff!"

I'm not saying formula is bad (formula in no way equals tobacco...like at all). I'm just saying that mixed messages end up confusing me. That's probably why they're called mixed messages.

After we'd wandered through the museum we went outside to wander around the homestead, which is quite beautiful. We saw all different sorts of buildings—the curing house, the sorting house, and things like that. I'm not sure what all of them were for or even what they were called because we skipped the walking tour (it's 45 minutes long and we don't have that sort of attention span in our family).

But here's a picture from what I'm positive was the curing house. The method of curing tobacco and giving it that rich golden colour was discovered by a slave by accident. There was a big display about it in the museum with a sign reading, "'Twas an accident," and a very 1970s-esque cartoon describing the whole mistake. 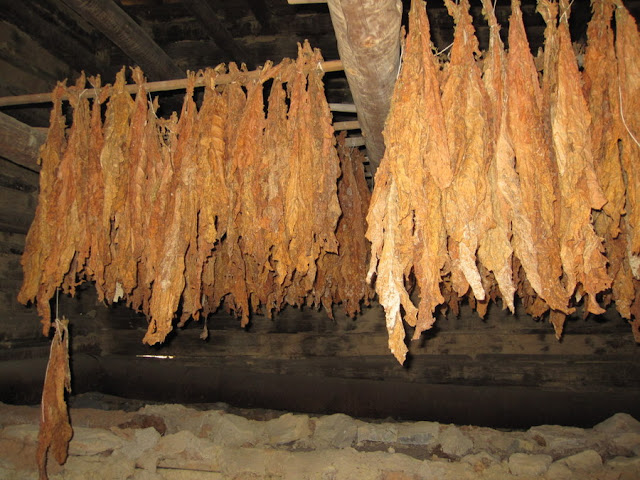 Tobacco leaves are fairly huge. I didn't know that before we visited the museum. They're like as long as my arm. Who knew?

Rachel was running around exploring and having a great time. 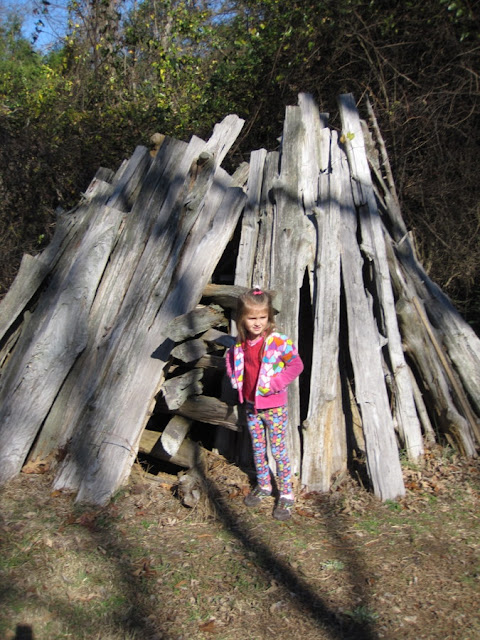 Miriam sat in the stroller looking gloomy. We invited her to get out and play but she just shook her head no. 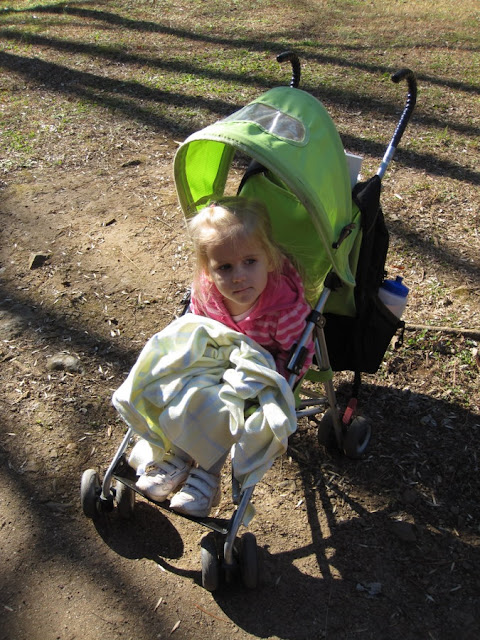 Rachel went into one of the buildings with me when we met up with the tour. Miriam still didn't want to get out of the stroller. She just pouted instead. 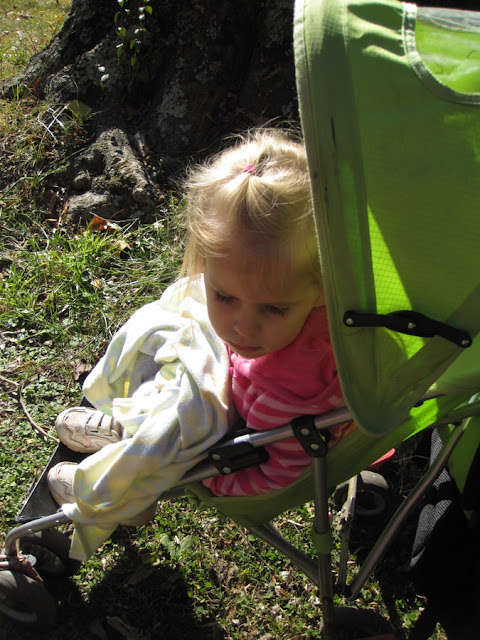 The whole homestead is fairly beautiful—as most places around here are. 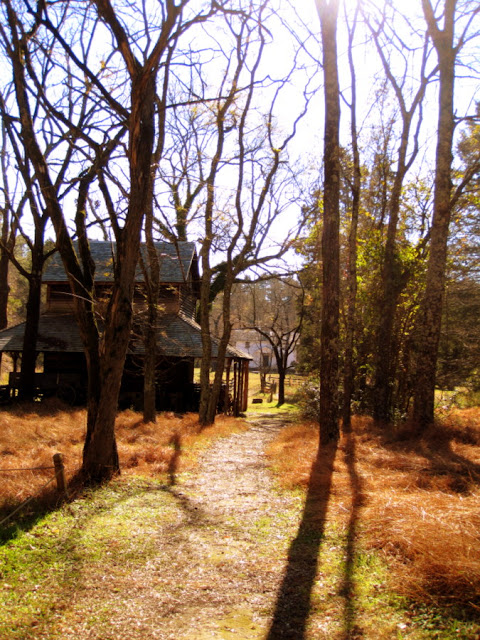 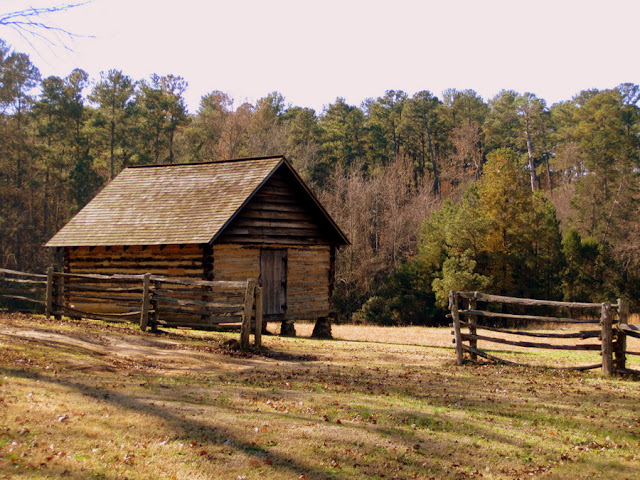 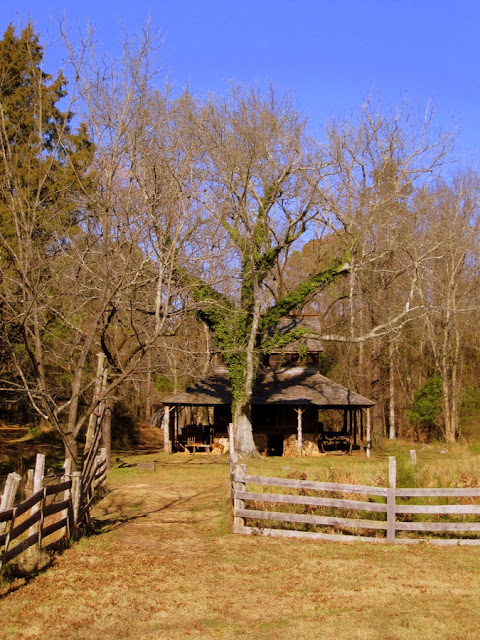 When we got to the actual house, though, even Andrew wanted to go inside with the tour so we told Miriam that she'd have to hop out. (We don't usually buckle our kids into strollers if we're doing an in-and-out-and-in-and-out kind of activity.)

"I can't!" she finally wailed, removing the blanket from her lap to reveal that she'd buckled herself in.

We enjoyed looking at the house, but that's probably because we're still in the thick of the Little House series (we just finished The Long Winter and started Little Town on the Prairie tonight). We talked about the stove and the kerosene lanterns and other items the girls spotted that they'd been trying to draw pictures of in their mind but don't usually see in real life. 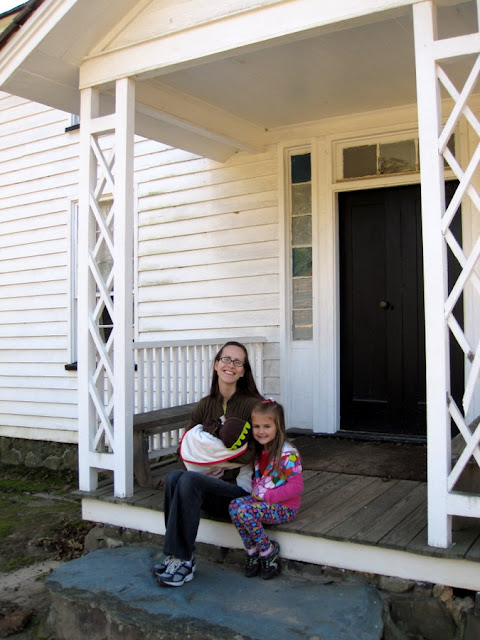 We learned that a sign of a well-kept yard in the south in the 1800s was a hard-packed patch of dirt swept clean of debris—you didn't want grass around your front steps—in order to keep snakes and bugs and rodents away. And, actually, my grandma talked about sweeping the front yard when she was telling me about her childhood in Florida, so it was still a thing then. 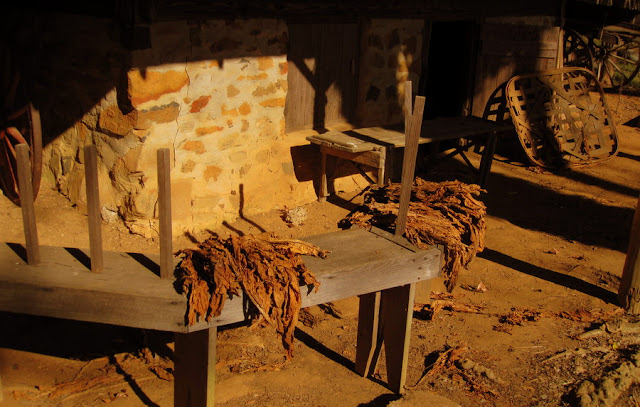 This morning Miriam came up to me and said she'd written a song.

I asked her to explain her song to me because the first thing that popped into my mind while she was singing was, "What in the world?!"

"The Duke Homestead isn't bad," I explained. "They just didn't know tobacco was so bad when they were building up their tobacco empire. It was an honest mistake. They're both fine homesteads."

I'm glad she took something away from our little trip to the Duke Homestead/Tobacco Museum. We all learned far more about tobacco than I ever thought it was possible to know. I was happy to learn a little bit more about our city's history.

George Washington Duke, who went by Washington, was over six feet tall—but his bed was super short. This wasn't a problem because back then they believed that sleeping propped upright helped ward off consumption and other lung ailments like that. I can't think of a worse way to sleep—I mean, I do it if I'm super stuffed up but not otherwise.

Anyway, George Washington Duke had a son he named James Buchanan Duke. Andrew was telling me all about their family legacy in the car on the way to the museum, and I said, "Wouldn't it be awesome if James Buchanan Duke went by Buke? Buke Duke."

And he did to everyone but his family, who lovingly called him...Buck. (I still think it should have been Buke.) George Washington Duke once said, "There are three things in this world I will never understand: electricity, the Holy Ghost, and my son Buck!" That's not a direct quote because I neglected to take notes on that, but I remember it because I thought it was hilarious (and I faintly recall stumbling upon it somewhere in the past).
Posted by Nancy at 1:03 AM