"You'll never get in," Reid told us when we first declared our intention to attend Duke. He wasn't talking about academics, though. He was talking about sports, specifically basketball.

This week Andrew got an email announcing that the first game of the season would be a "family night" and that their graduate student association had purchased a number of tickets and all we had to do was get in line early enough to beat the crowd and we'd get in the game for free, so we picked Rachel up from school instead of letting her bus home and headed off to campus.

We had to be in line by 4:30, as per the emails instructions, and we got there around 4:15. The line was virtually nonexistent but it did get long as we were waiting. I think everyone who was in line got into the game, though.

Once we got our wrist bands and knew we'd be getting into the game, the first thing Andrew did was call his father to gloat. 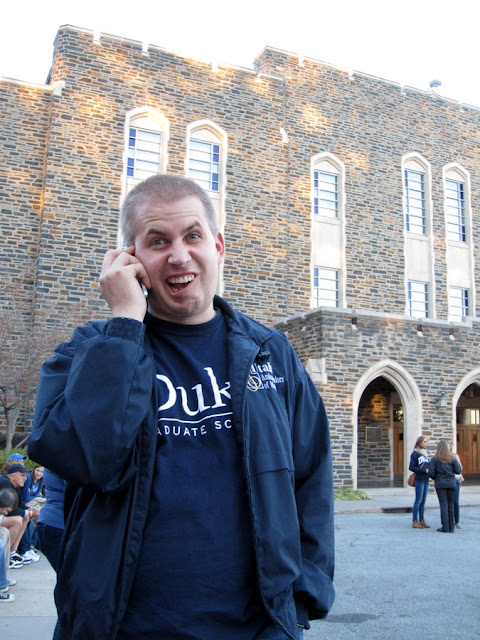 We ate the meager dinner that we had packed (peanut butter and jam sandwiches for the win!) and went into the stadium a lot earlier than we had planned on. They moved us inside at 5:15. The game didn't start until 7:00. Miriam was asking if the game was over before it even began. They put a countdown timer on the clock when we had one hour left until game time.

I thought it was a little ridiculous to be seated so early. We got penguin bracelets (which made Rachel ridiculously happy because she's in the penguin class at school) along with all the other families with small children...and the penguin group was seated first in the stadium. We were sitting out watching Georgia warm up long before Duke joined us on the court! 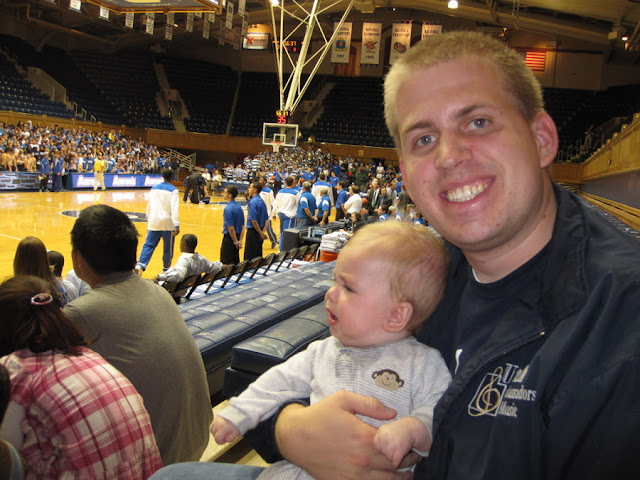 The energy in the room was fantastic; though it reduced Benjamin to tears on more than one occasion. Grandpa/Reid skyped in so that he could take part in the excitement—you can see he was excited to be there: 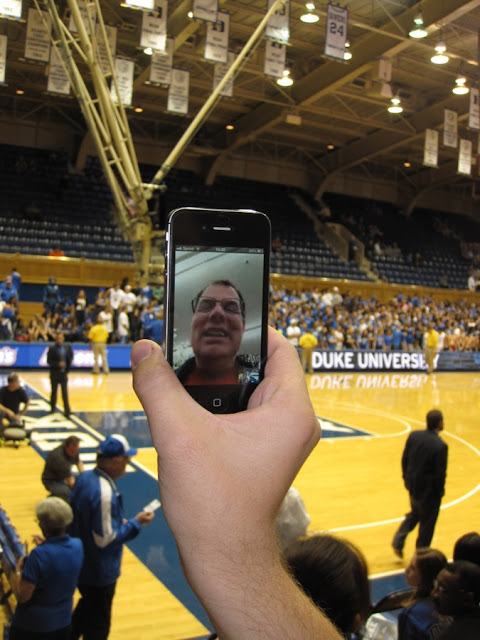 He's a long-time Duke fan, first-time skype-in Cameron Crazy. He was a little jealous that his grandchildren got to go to a game before he did. Really, though, I don't understand what all the fuss is about... Of course, I spent most of my time pacing around the lobby with Benjamin.

In total I think I spent fifteen minutes watching the game. Poor Benjamin was completely overstimulated and his choice method of expressing his discomfort is puking (all. over. the. place.) so I fashioned a little sensory-elimination device for him (a burp cloth turban that covered his ears and his eyes). This helped him to fall asleep (and gave me a full fifteen minutes in the stadium. 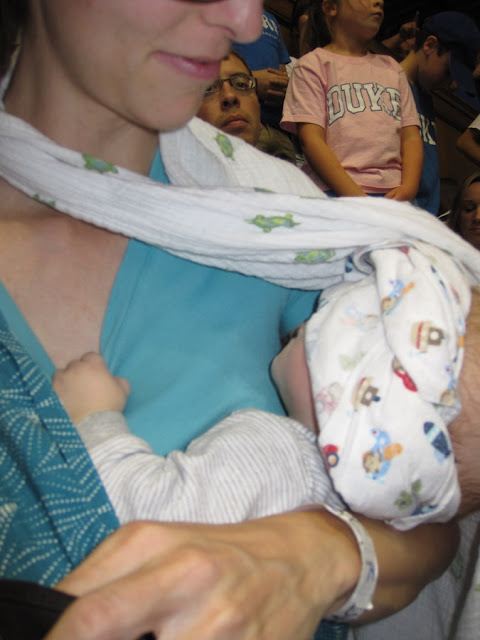 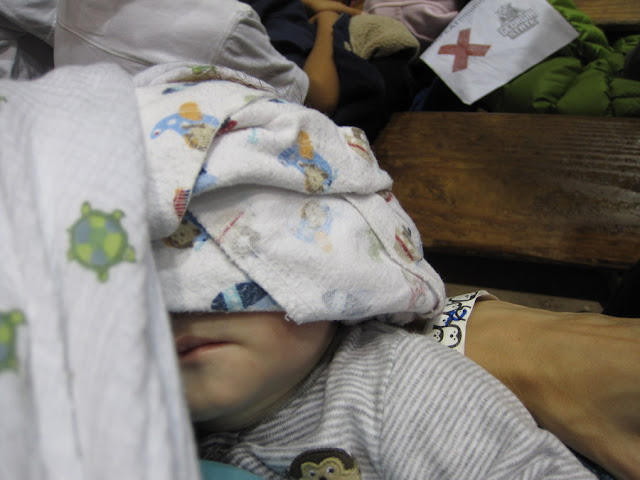 Most of my time was spent in the lobby, though so the security staff got to know me quite well. 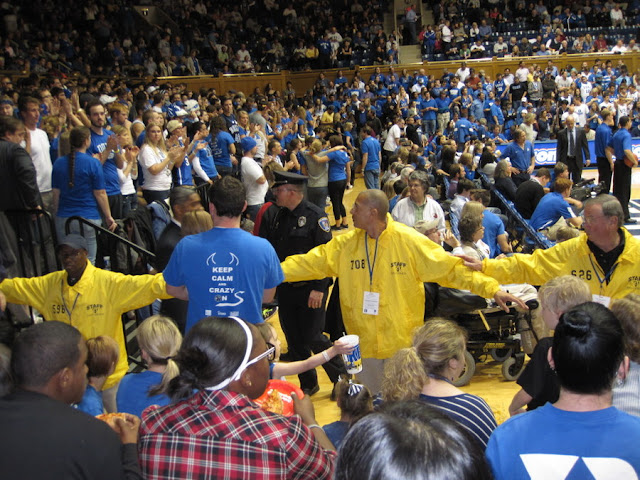 One of them has a day job at Burt's Bees and had a little bag full of free samples that he was giving out. I was a little wary to take them at first but his coworkers assured me it was legit.

Here are a few pictures of the game for those who care. We were so close to the court we were on it—fans were close to touch the players! And they were amazingly loud, coordinated, and ruthless. 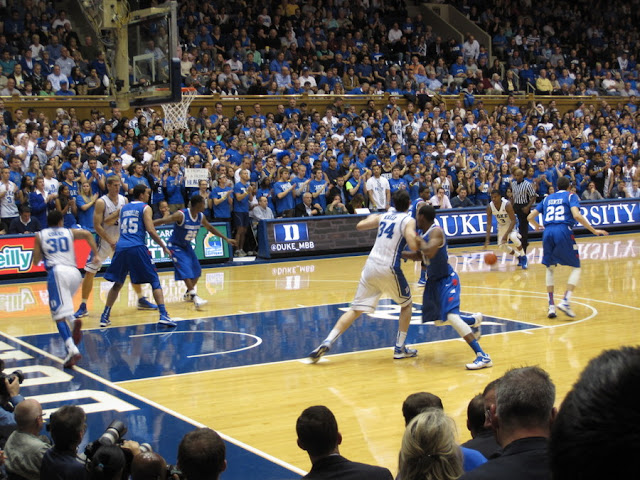 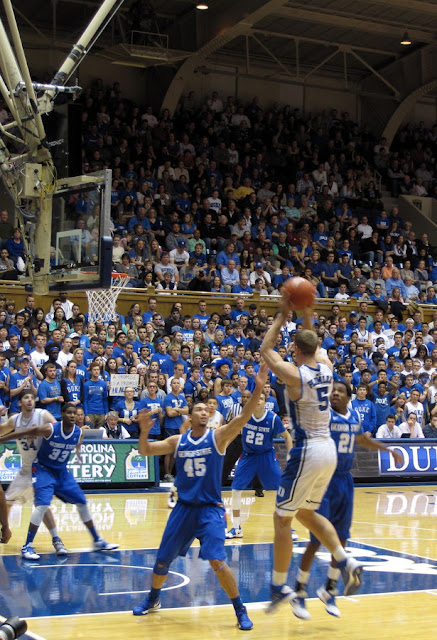 Here they are doing some weird chant thing (I took our picture because our friends the Farneses are over there): 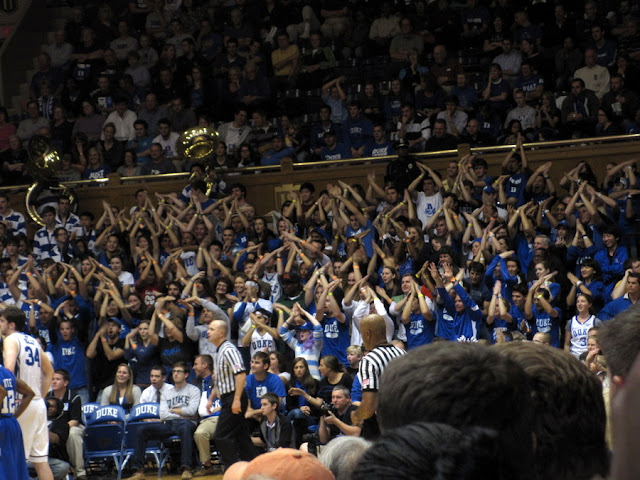 Whenever Duke did a free throw the crowd would go silent and lift their arms in the air. If the player made the basket they'd all drop their arms at once and say, "Whoosh!" 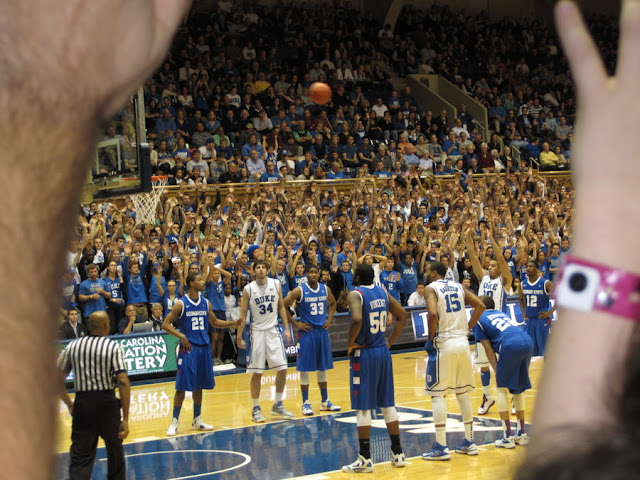 Andrew told me that Georgia took one of their players out just to make the crowd stop chanting at him and when they put him back in to play the crowd just started up again.

They must be die-hard fans because I had no idea who any of the players were. Neither do my children. And I don't think Andrew does either.

"Who's your favourite player?" our escort asked Rachel as she was bringing us to our seats.

"I like all the players, too!" the girl agreed.

Somehow the fans can actually keep the players straight. When the players from Georgia were being introduced they paused between each name so that the crowed could yell, "Hi, So-and-so!" in a patronizing tone. The Duke players got nothing but applause.

It was the most intense crowd I've ever been a part of...even if I was only a part of it for a few seconds.

All I know is that if we go to another game we should probably have Duke shirts (I think we were the only ones there not decked out in Blue Devil paraphernalia) and we should probably just leave the baby at home. Actually, maybe we should just leave me, the baby, and the toddler at home—Andrew and Rachel can make a night of it.
Posted by Nancy at 11:50 PM