Dumb ways to light your kitchen on fire...

I'm not sure where I saw this brilliant idea first.

I haven't been on Pintrest in ages—it's like browsing through the internet instead of pointedly researching and I just don't have the time for that so instead I let my friends curate for me and they will occasionally share ideas on their Facebook feeds or whatever. I've seen the idea resurface time and again in multiple places. Suffice it to say that this is an idea that has been floating around in my brain for a while. I was the Sunbeams (3–4 year olds) teacher in our last ward for half a year (and then I taught the ten year olds for a year (and then I taught Sunbeams again for half a year (and then I had Benjamin))) and the children were always frustrated by the ridiculously pitiful scraps of crayons we'd offer them to scribble with. I thought it would be a fulfilling activity for the Young Women to get together, sort the crayons into colours, peel off their papers, and melt them down into new and improved "fun" crayons instead of the decade-old, partially-chewed, snapped-into-fifths Crayola crud they'd been using.

I suggested it to the Young Women presidency but so far as I know my suggestion was politely cast aside and now I know why....

I figured this would be an excellent way to get rid of all our broken crayons, which is mostly what our crayon box is filled with. I thought the girls would enjoy them, both to have and to give away as gifts. It's like recycling, big time. Besides, it looked like fun! 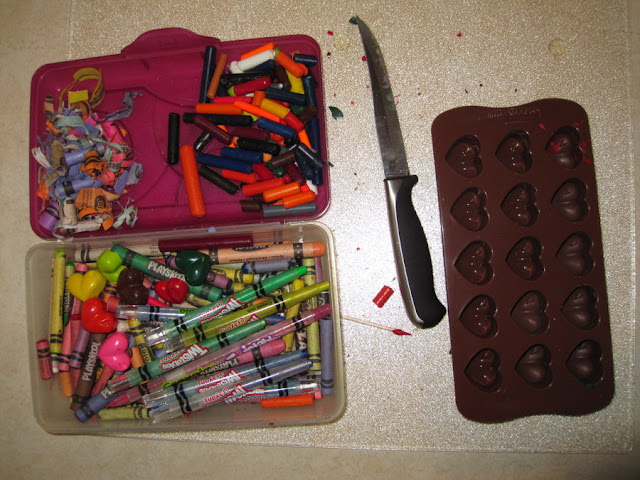 They turned out cute and fun. The girls took them out for a spin on some paper and found that they were marvelously enjoyable to colour with, besides which they can be arranged as butterflies when you're not using them (and as an extra bonus they don't roll off the table). 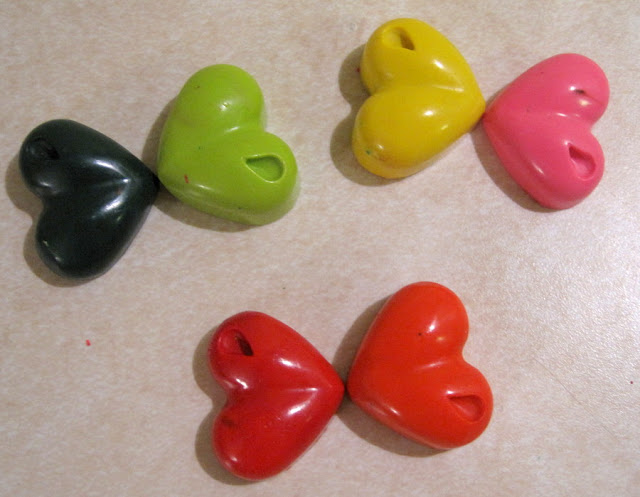 We're having Thanksgiving dinner with some friends tomorrow and I thought it would be nice to bring some crayons as a gift for our host('s children) so after we got the kids into bed I set about to make another little set of crayons (since our first set had already been used).

I knew I had to get the microwave to stop cooking but I also wanted to contain the fire. I couldn't think of what button to press to stop the microwave so I just yanked the door open.

"What's wrong?" he asked, running into the kitchen.

"My crayons are on fire!" I wailed.

He reached into the microwave, pulled out the tray, and put out the flames. (My hero.)

"What happened?" he asked. "Was there a little paper left on a crayon or something?"

"I don't know," I said. A quick inspection of the partially melted crayons gave me my answer. Only one cup had lit on fire. "Oh," I said. "I put a silver crayon in. I guess maybe there was metal in it?"

That's really the only explanation.

I fired up the oven so that I could finish melting the crayons without, you know, burning the house down. While they melted, Andrew and I took turns scrubbing out the microwave.

"You can stop shaking now," Andrew assured me as he watched me trying to get SoftScrub on the paper towel instead of all over the floor.

"Oh, sure," I said. "I'll just tell my primal instincts to stop being so instinctual."

The microwave is now (mostly) clean. We've even used it (Andrew's making Yucky Pumpkin Pie) and nothing bad happened, so I guess it survived. 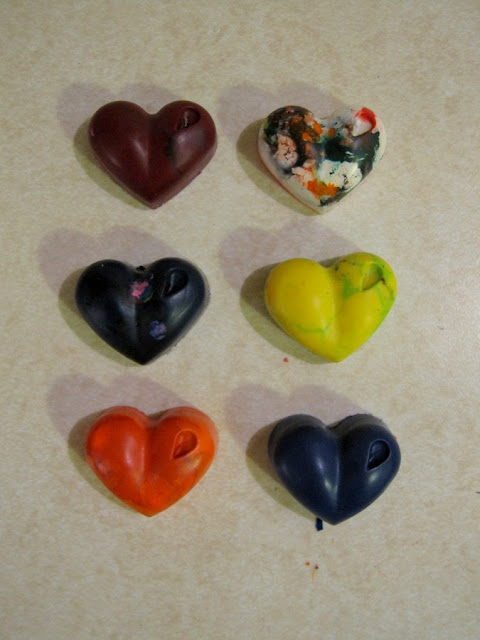 I've taken the crayons out of the fridge and popped them out of the mould, all except the one the started the fire. 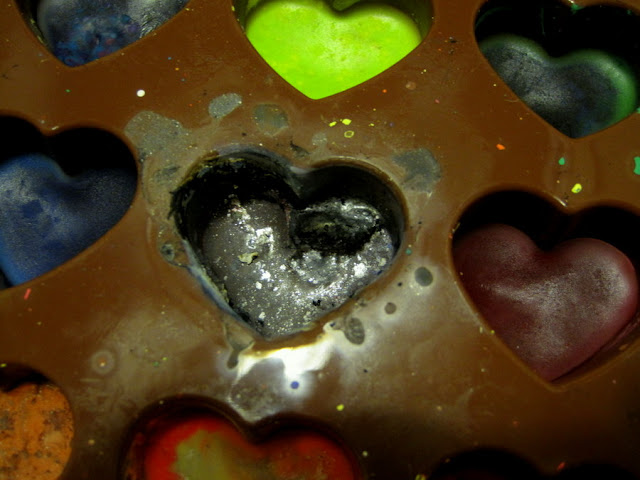 I had high hopes that my brand-new, arrived-today mould would somehow withstand its little mishap. Alas, silicon, while heat-resistant is actually not supposed to be exposed to open flame. I knew that—and I never really intended to do so—but I was hoping that perhaps my mould would forget that it doesn't like fire. 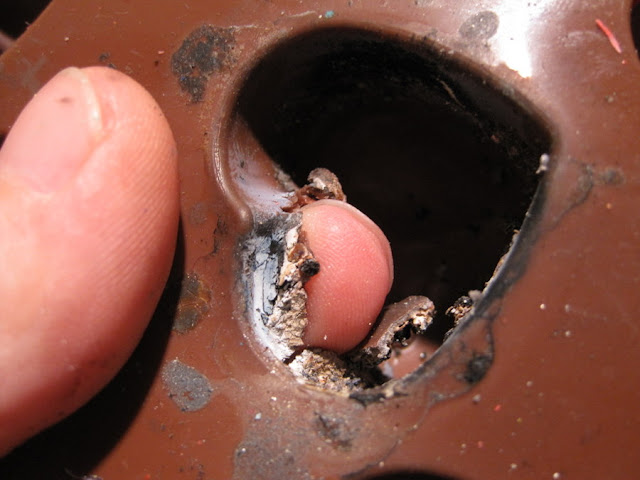 I had to pry that silly crayon out of the mould, which crumbled at my touch (but just that one cup so it wasn't too bad). 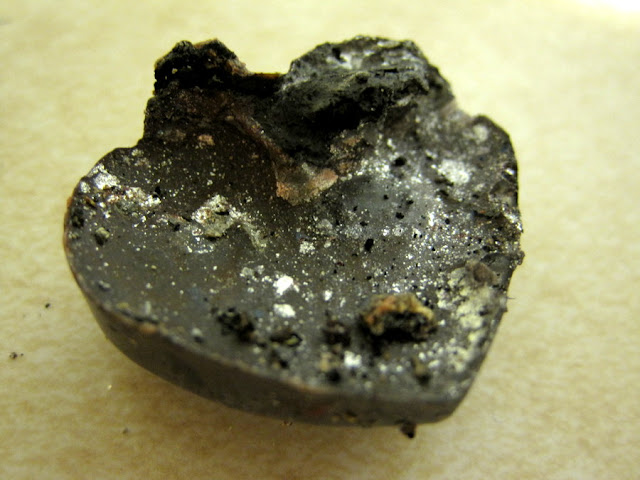 We decided that the best course of action would be amputation, so I flipped it over to begin cutting and do you want to know where the little "do not expose to open flames" warning symbol is? Right there. 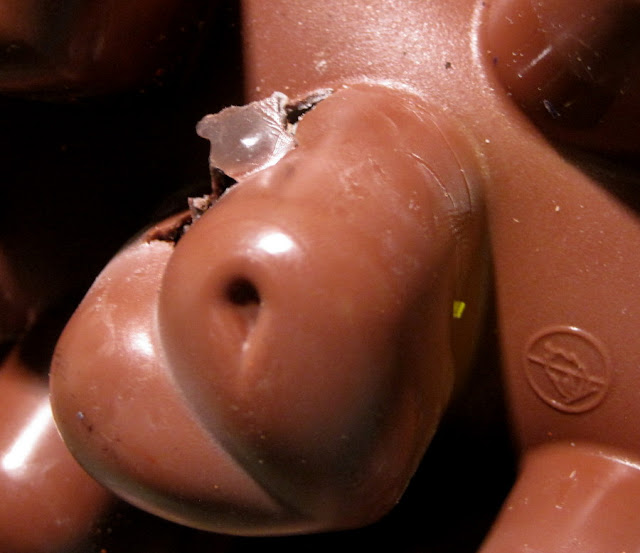 I'm just thankful I didn't completely destroy the mould. Or the microwave. Or the kitchen. Or the house.

And if you come over and our house smells faintly of burnt crayons...now you'll know why.

PS. Don't ever melt sparkly/metallic crayons in the microwave.
Posted by Nancy at 12:47 AM