Yesterday Miriam, Benjamin, and I went visiting teaching. Ordinarily this is a solemn affair, a sit-quietly-and-don't-interrupt affair, a don't-touch-that-it's-not-yours affair, a yes-yes-we're-almost-finished affair. Not that the ladies I visit teach are grumpy or hoity-toity at all; it's simply that visiting teaching is an adult thing to do (which means that children find it very boring).

I've been lucky here, truthfully, and have only gone visiting teaching while Andrew's been home during the day so he's kept Miriam. I don't know if that's really luck since the only time I get the car (ie. am forced to drive it on my own) is when Andrew is home and if he's home then what's the point of taking all the kids with me when I go out? There hasn't been one...until yesterday.

One of the ladies I visit teach suggested that we meet at the Life and Science Museum this month instead of meeting at her home. She has a pass that's good for six people—we filled the quota with me and Miriam, my visiting teaching companion and her daughter Gwendolyn, and the two ladies we visit teach...and a baby for each of us (but babies don't count against the pass). It was a rather relaxing visit.

We just wandered around the museum, following Miriam and Gwendolyn around while we visited.

Miriam was especially excited about the space ship and, oddly enough, the sunscreen exhibit upstairs. The spaceship is understandable because you can actually climb inside and play around. 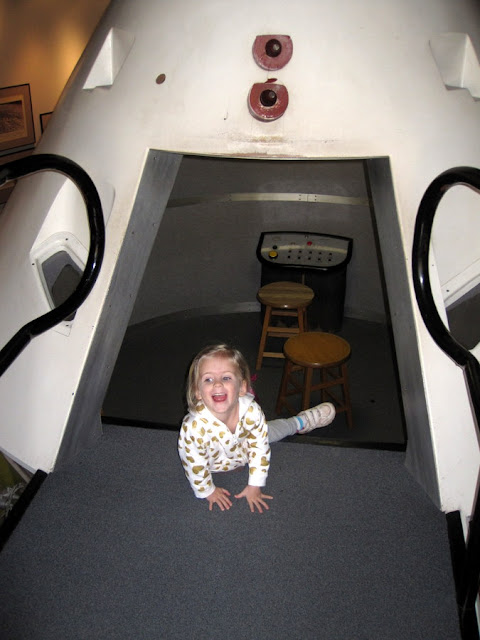 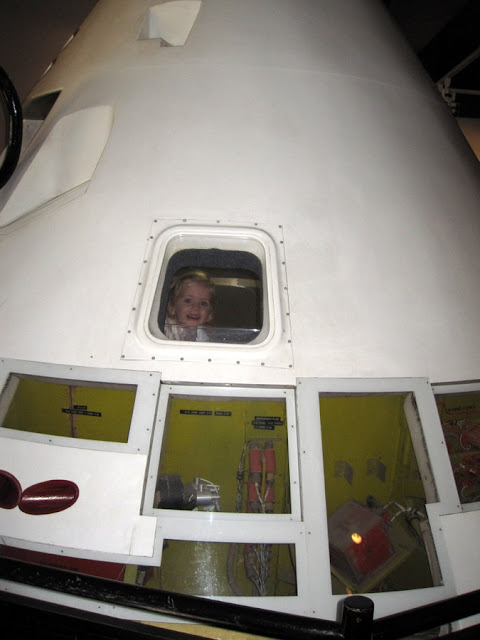 The sunscreen exhibit makes an impact (but I don't understand why a three-year-old would find it so fascinating)—you put a drop of sunscreen on your hand and then look at your hand under a special light that does something with UV rays (picks up the UV rays your skin bounces back or something like that) and where the sunscreen is all you see is a black dot. Then you rub the sunscreen in all over your hand and your whole hand turns black—it looks like it's covered in mud or something. It certainly made me want to be more diligent about putting on sunscreen—sometimes it's hard for me to trust that sunscreen is the real deal.

The special effects lab was cool. They had this one exhibit where you stood in front of a screen that had an image of little droplets falling. Your shadow would interrupt the flow and you could collect the droplets in your hands or have them fall on your head and cascade around you. It was really weird. And neat. 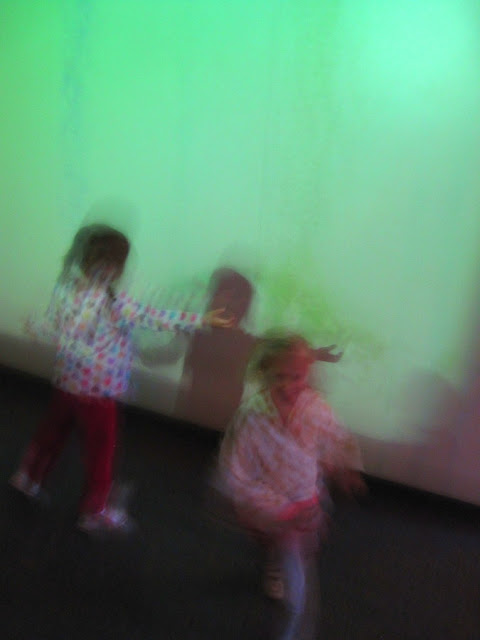 Here's Miriam learning about volume. She and Wendy found the biggest container in the room and filled it to the very top and probably would have played at that station all day but the grown ups urged them to push forward, hoping to find an environment better suited for the little babies to roam around (or just lie on their tummies). 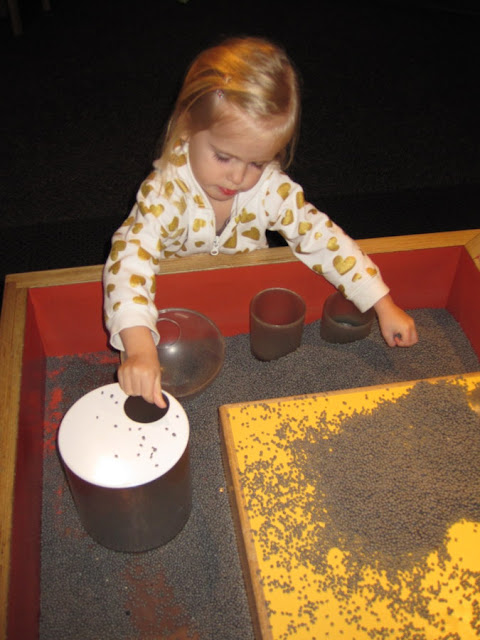 There's an infant play room on the main level—it's gated—so that's where we went to let our kids run around/roll around while we sat on the mats and discussed life, kids, and the gospel. The babies all started getting fussy, almost as if on cue, so our little party disolved. Everyone decided to go home but Miriam, Benjamin, and I had planned to stay for a while longer (Andrew actually dropped us off at the museum because he ended up having to run to campus). Miriam wanted to see the dinosaurs but we got sidetracked at the park, which worked out just fine because Benjamin needed to have a snack. I fed him while she played.

"Stephanie!" I called out. "I thought you'd left!"

"Well, I was going to," she explained. "And I was just about out the door but then I saw that they had this whole outside area and decided I wanted to explore. I'll let the baby nap while I walk around."

That's the way to do it, I think, or you'd be stuck at home all the time (which really doesn't help combat the baby blues). 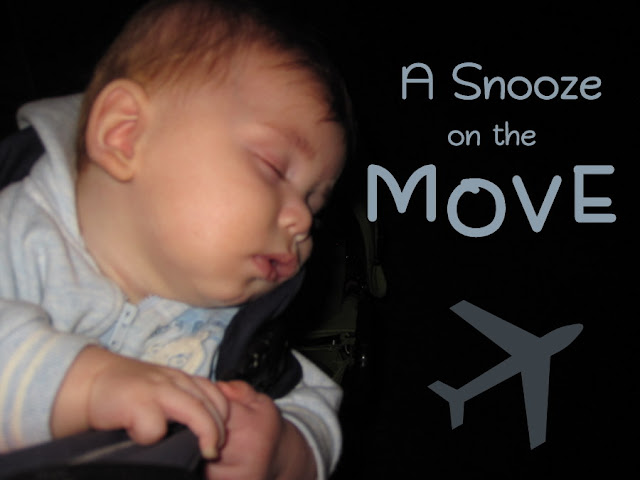 So Stephanie and I walked around together—she with a baby strapped to her back and me with a baby strapped to my front—and indulged Miriam in whatever activity happened to catch her fancy. Mostly Miriam wanted to see the dinosaurs, but along the way we stopped to climb around a train and to visit the animals on the farm. They have alpacas now—Miriam kept calling them lambs (I'm sure she meant llamas). 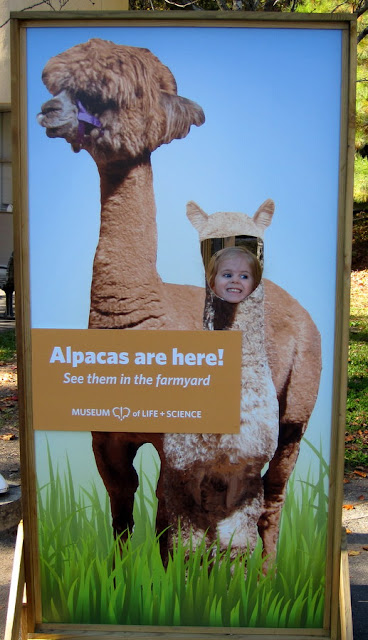 We thoroughly enjoyed the dinosaur walk. 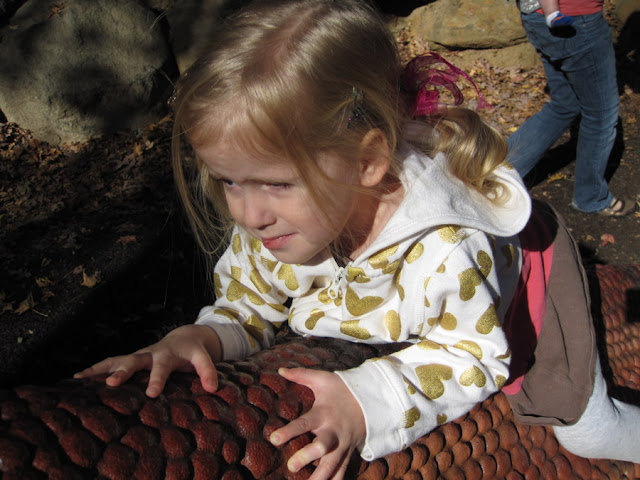 And then we had time to visit one last place—Miriam chose the butterfly house. It was a good day for butterflies yesterday. The last time I was there with Miriam we hardly saw any, but today they were quite friendly and active, especially the big black and white ones. 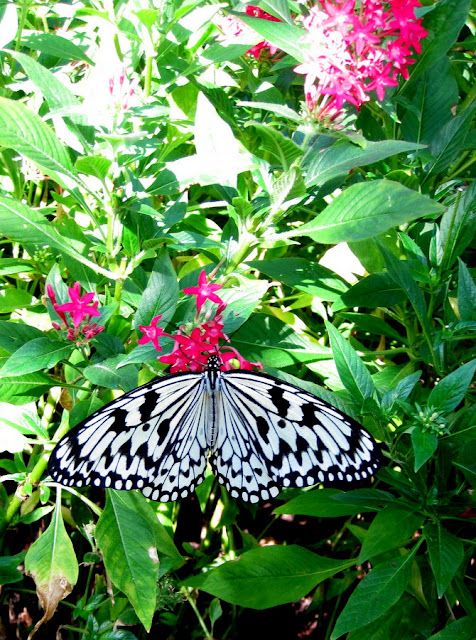 Miriam wanted one to land on her finger so desperately. 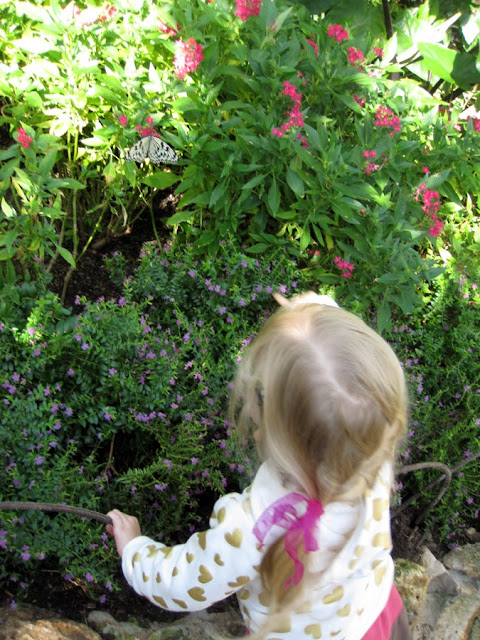 But whenever any butterfly came too close to her she'd shriek and run away. 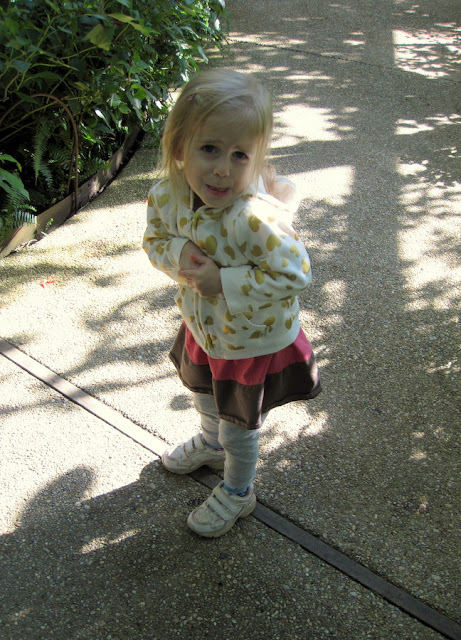 And I noticed, toward the end of the butterfly walk, there's an enclosed display of chrysalises attached to strings, hanging on a board. It seems they have butterflies constantly hatching from their chrysalises so we watched a few breaking to begin the long process of spreading out their wings. They let the freshly emerged butterflies into the butterfly habitat twice a day and that's where they live out their lives. 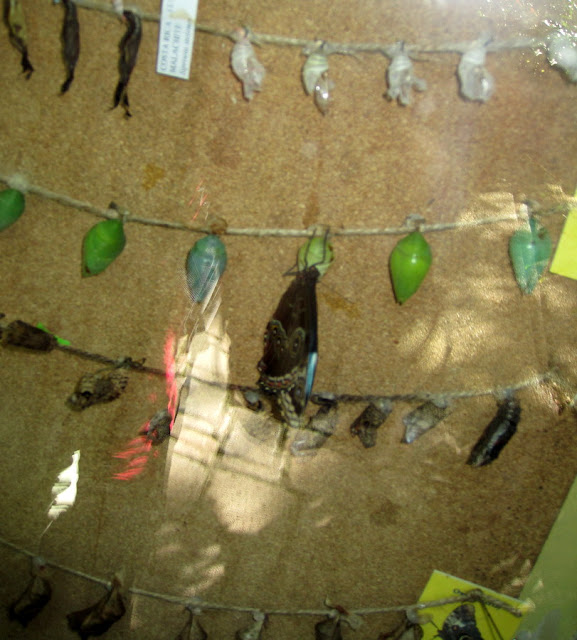 By the time we got out of the butterfly museum we were just in time to meet Daddy out front so we said goodbye to Stephanie and her baby and rushed off to the front entrance (stopping to say goodbye to the alpacas on the way). We had to race to Rachel's school to pick her up because the girls had doctor appointments...which I'll tell you about later because our clinic is amazing!
Posted by Nancy at 11:11 PM