Easter Egg Hunt (round one)

The annual neighbourhood Easter egg hunt was this morning so even though we woke up a bit late we got ready to go in a rush and were able to make it on time. I forgot to get the Easter baskets down from the attic when I was up there last night (to get out the double air mattress that we didn't know we'd need until Grandpa suddenly showed up) so I made some up for the kids while they ate breakfast. I was worried they'd be a little small—because I made them out of lunch bags—but they ended up being a wonderful, generous size (in my opinion). Some kids had huge bags which they filled with eggs. I can't even imagine having that many eggs in my house. I think my kids got at least ten eggs each which was plenty enough.

I was happy to have Reid and Karen come with me (Andrew was running a fever all through the night so he was home in bed) because my kids were split up into three different groups. Two and under. Three through five. Six and above.

I had friends around who could have helped supervise my six year old on the hills next to the 45 MPH road but grandparents are a little more attentive (since they didn't have their own children to worry about). I think the six year olds were pulled back into the playground at the last minute, anyway, because there weren't many 3–5 year olds there.

The baby egg hunt was over by the parking lot so Benjamin and I headed over there, leaving Grandma and Grandpa to watch Rachel and Miriam. Grandma said that Miriam was hilarious—she was stepping over eggs trying to find other eggs, not even realizing she was passing eggs up.

Benjamin was also pretty hilarious. I told him he could pick up an egg and he was all, "Now what?": 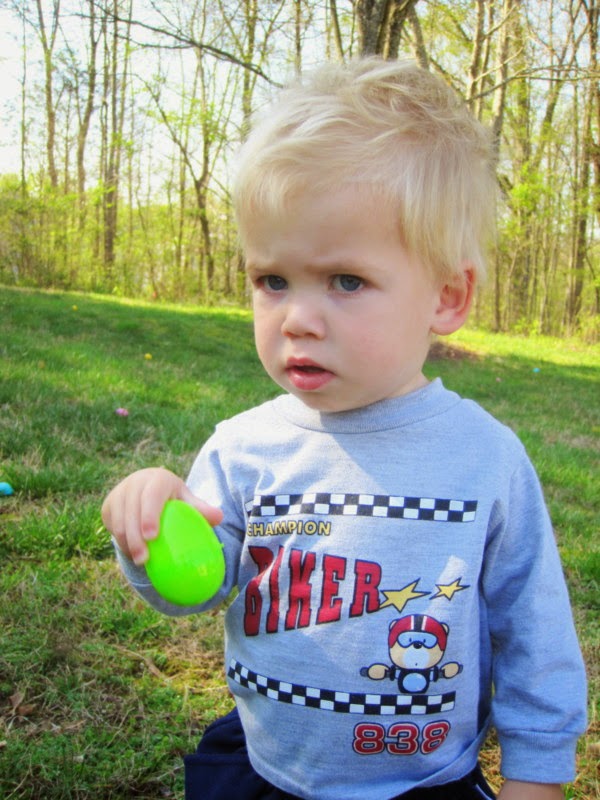 I told him he could pick up other eggs and he was like, "No thanks. I already picked up one egg and it wasn't thrilling. You do know there are rocks and sticks I could be picking up, right?"

In reality he didn't say any of that. He just shook his head and said, "Uh-uh."

So I said, "Oh, but there's candy inside these eggs. You're going to want more than one of them."

He held his egg up to me and grunted, which in translation was him demanding, "Show me!"

I opened it up to reveal a mini-chocolate bar, which he then had to eat. I peeled the wrapper off for him and popped it in his mouth. He chewed it up, swallowed it, licked his lips. His eyes got wide as the reality of the situation hit him.

There's sugar in them thar eggs!

Sprinkled all over the hillside!

Free for the taking!

He dropped his basket and made a mad dash to collect eggs. He scooped them up with both hands and deposited them in his basket as fast as he could. 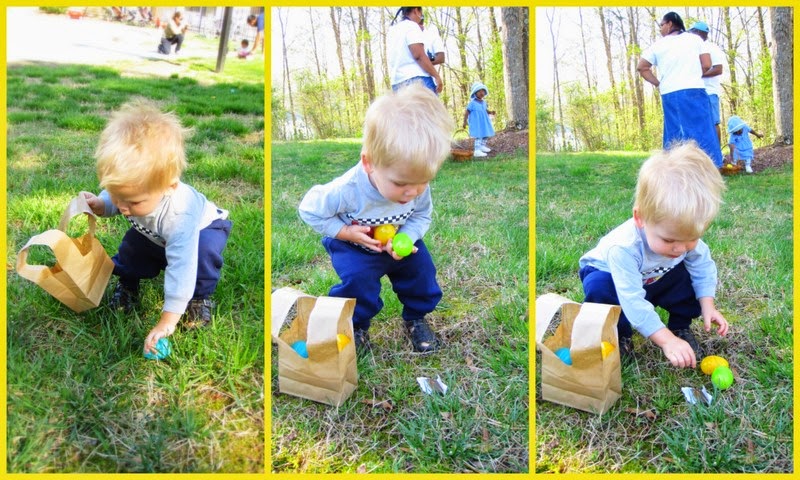 He filled it up in no time, though many of the eggs ended up in his basket already emptied of their candy because he demanded to eat the entire time he was at work.

When our slope had been cleared of eggs we headed back to the playground to see how the girls had fared. Miriam was quite pleased with her loot. 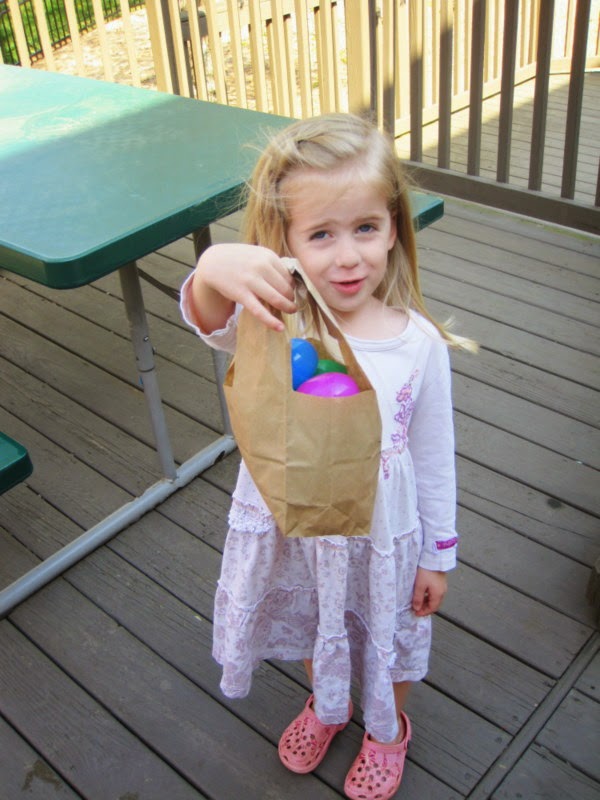 Rachel was quite the social butterfly, with all our street neighbours as well as her school friends demanding her attention. She walked up to us and the girls immediately—and wordlessly—sized up the other's handiwork. 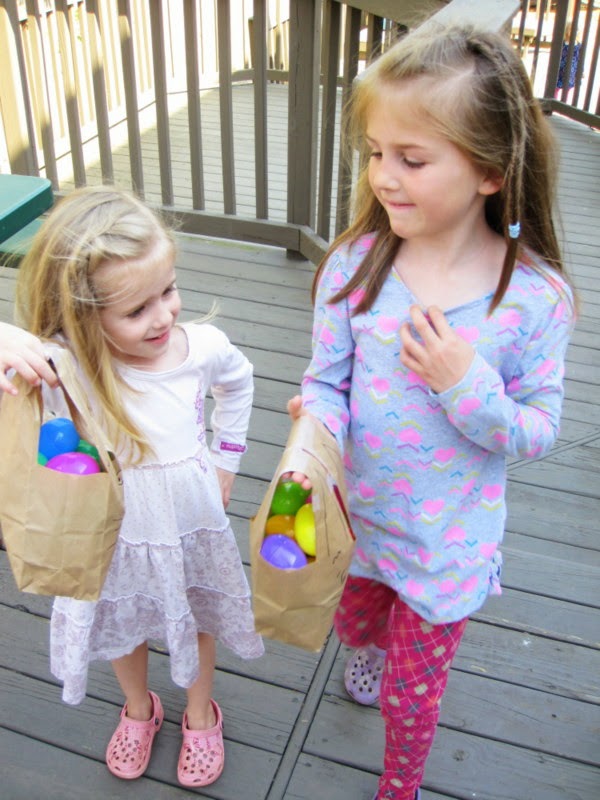 Both baskets were brimming full of eggs, both girls were beaming with pride over their collections, too happy to bother finding something to be jealous over.

At home the eggs' innards were spilled all over the table. Miriam got a ton of chocolate and only a couple of toys (she was particularly happy about a small red stretchy lizard). Rachel got a ton of toys and not very much candy (she got three tops, I think, among other things). Miriam's chocolate-filled eggs had been found in the shade. Rachel had clearly found hers in the sunshine so her treats had to be relocated to the fridge before she could eat them. 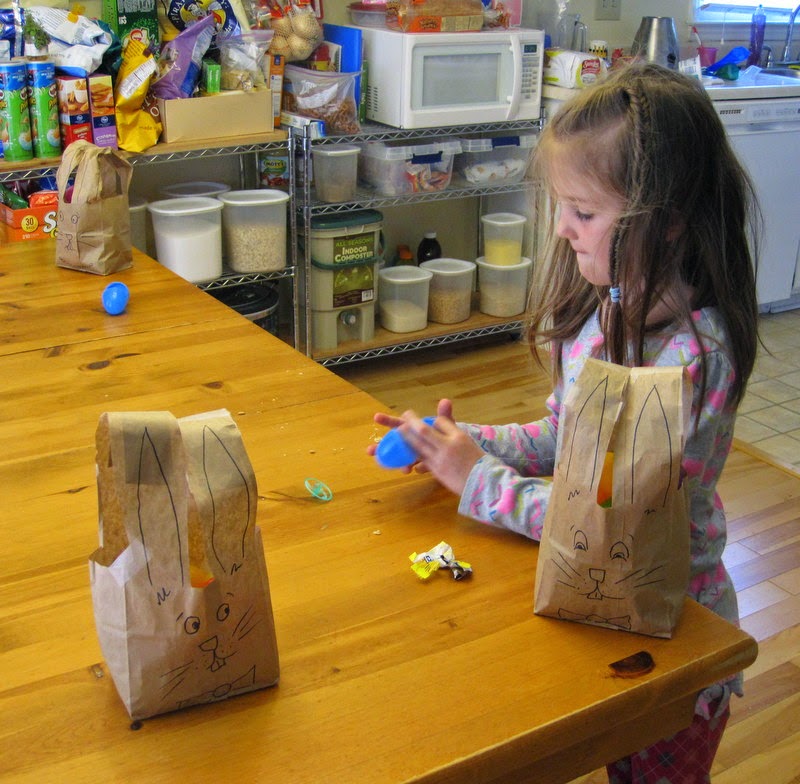 Benjamin ended up getting a lot of non-baby-friendly treats like Laffy Taffy and Gobstoppers. Miriam happily swapped chocolate for his treats. She was especially glad to when I got sick of playing arbitrator and offered her the rest of Benjamin's candy in exchange for one last chocolate bar because he doesn't understand the concept of "save some for later" and wanted to eat his whole stash right then and there.

The most obvious solution was to get rid of his stash. He was perfectly happy about the deal. He had no clue any bartering was going on at all. All he knew was there was a pile of candy in front of him and it was very delicious.

And because I'm vain, here's how the kids' baskets turned out: 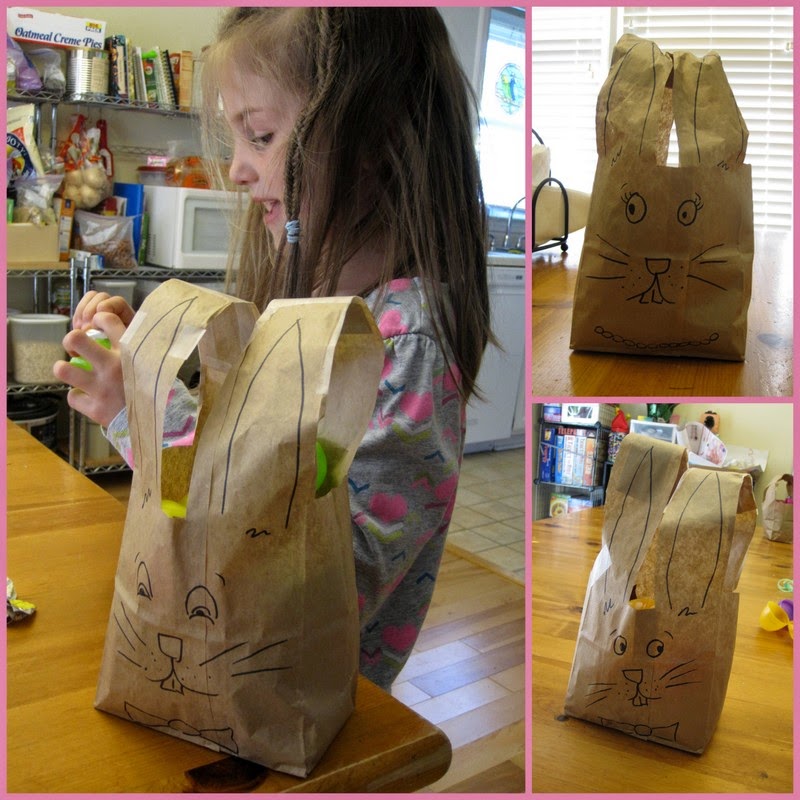 Rachel's is by her elbow there. Miriam's is the top right (it's a girl bunny) and Benjamin's is on the bottom right. I think Miriam's bunny looks a little startled but bunnies are about as skittish as tadpoles so I suppose it's a justifiable expression. All three kids were happy with their baskets.

I was, too (because it limited the number of eggs they could collect while still making them feel like they had a successful hunt because their baskets were filled to overflowing).

It was a lovely way to start the morning; a fun time was had by all.
Posted by Nancy at 11:50 PM