The museum and the weekend

Grandma arrived on Wednesday evening. We spent Thursday doing projects (we had a friend install a new stove, installed a couple of new light fixtures, and replaced an outlet). On Friday we were ready for some fun and took the kids to the Museum of Life and Science for the afternoon.

We went outside because it was a super busy day and outside usually feels less crowded. Besides, the weather is perfect right now. We hit the dinosaur trail first. Benjamin was so ready for a nap but got out of his stroller to walk, anyway. 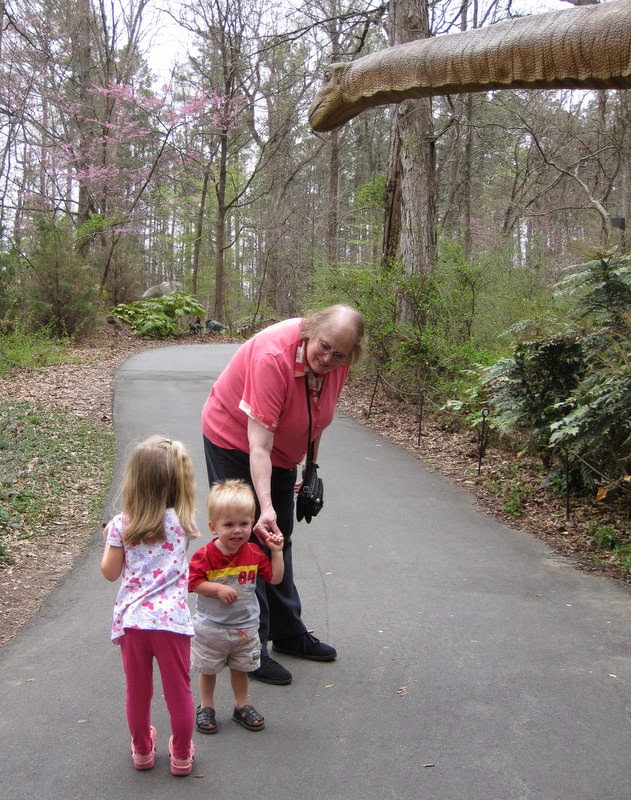 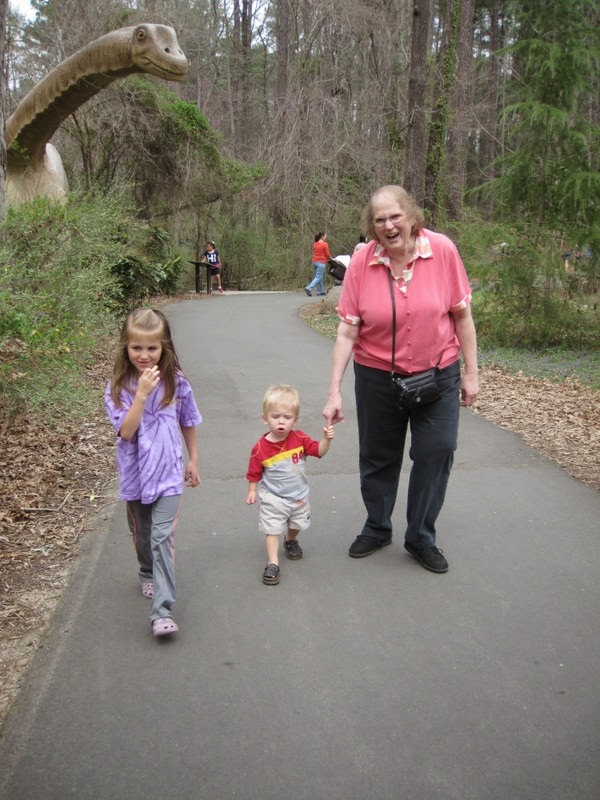 He is so funny about this Albertosaurus. At once fascinated and frightened by it, he just can't get enough! 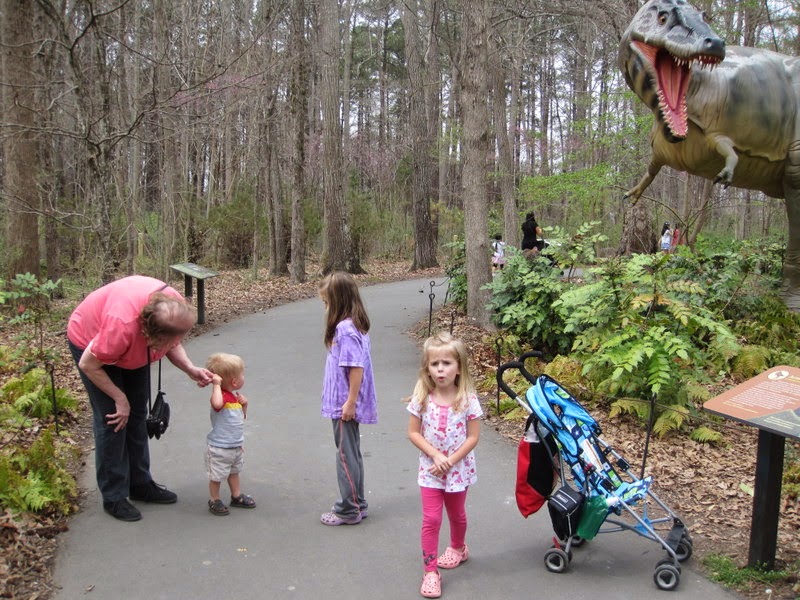 Here he is saying, "Scare! Scare!" 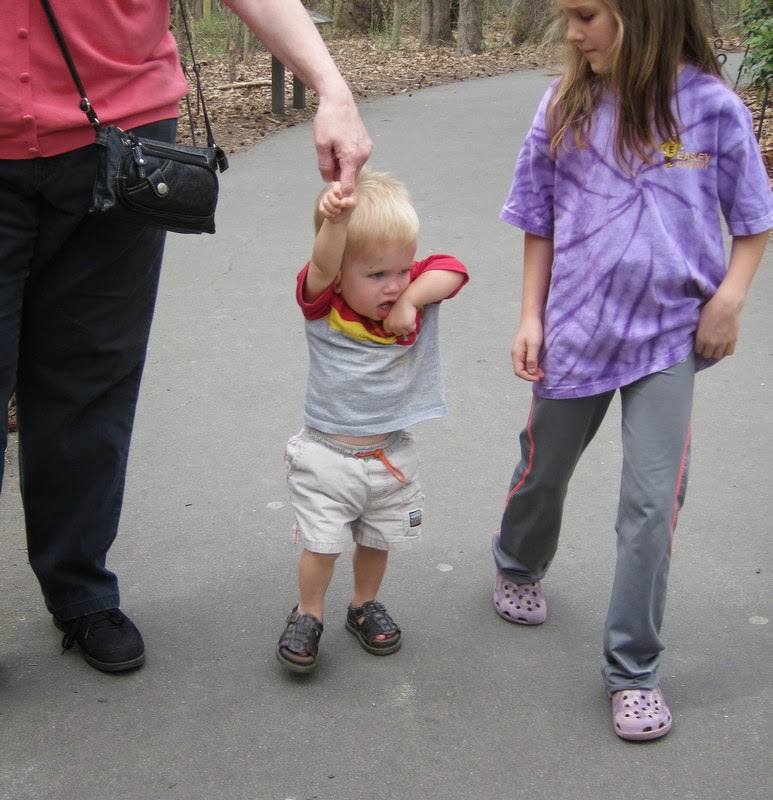 And here's everybody with the Parasaurolophus. Andrew was at home working, of course, so he's not in the picture, and I was behind the camera so I'm not in it either. 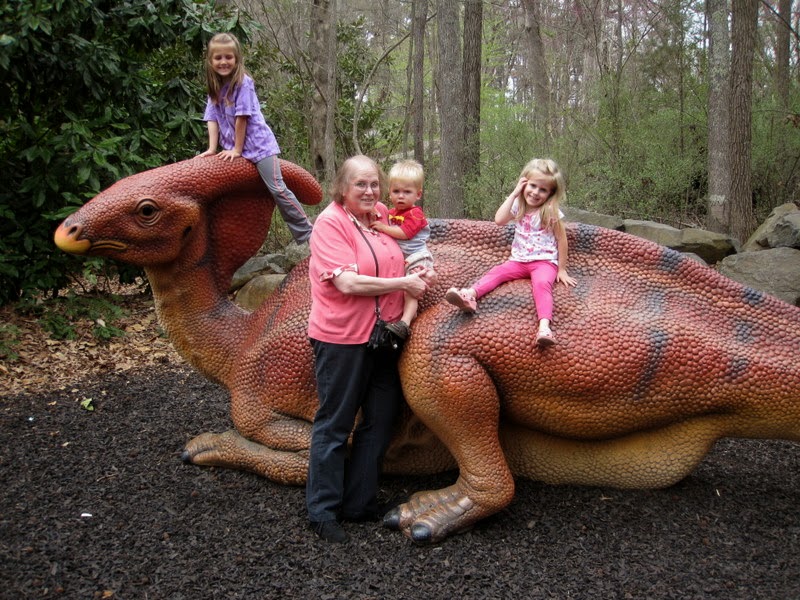 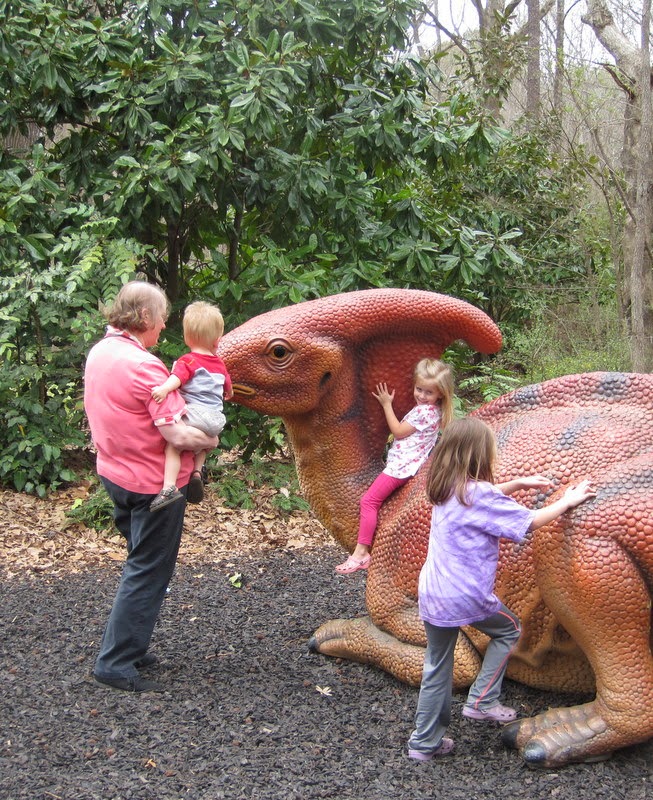 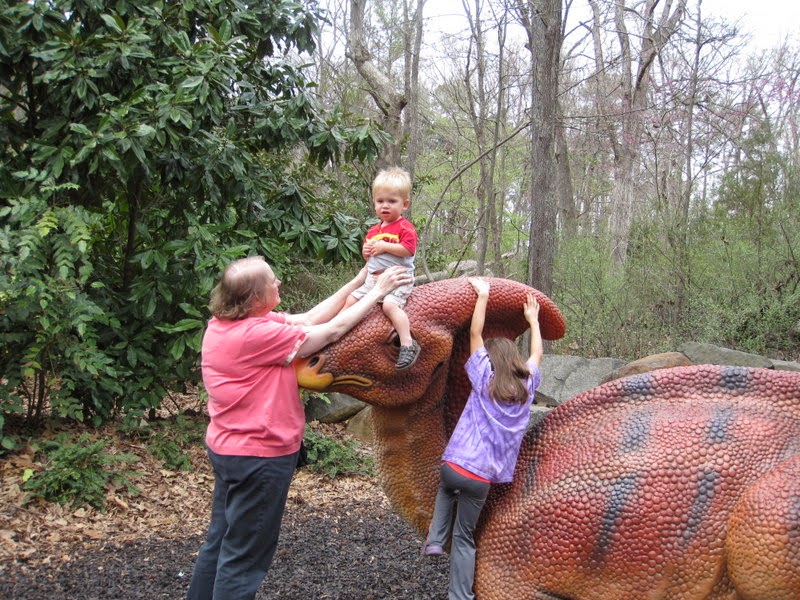 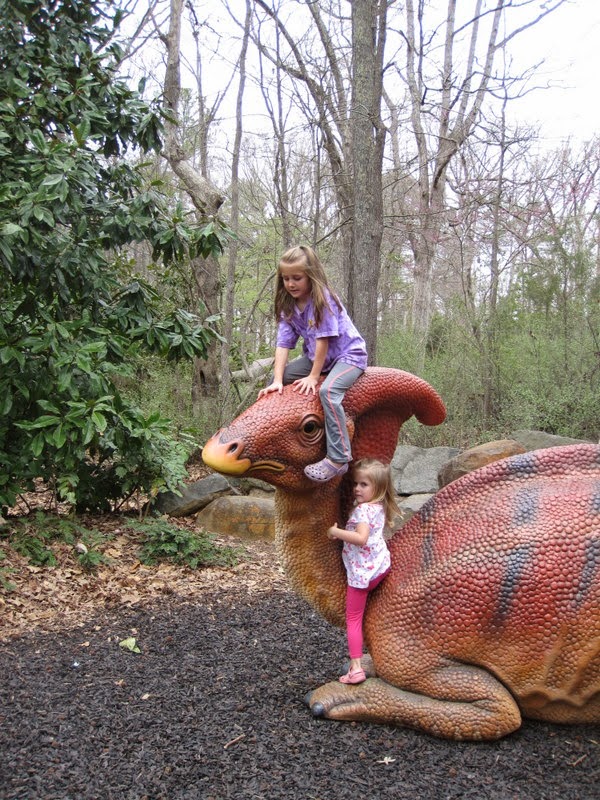 And here are Benjamin and Rachel creeping up on a ferocious Squirrelosaurus-Rex: 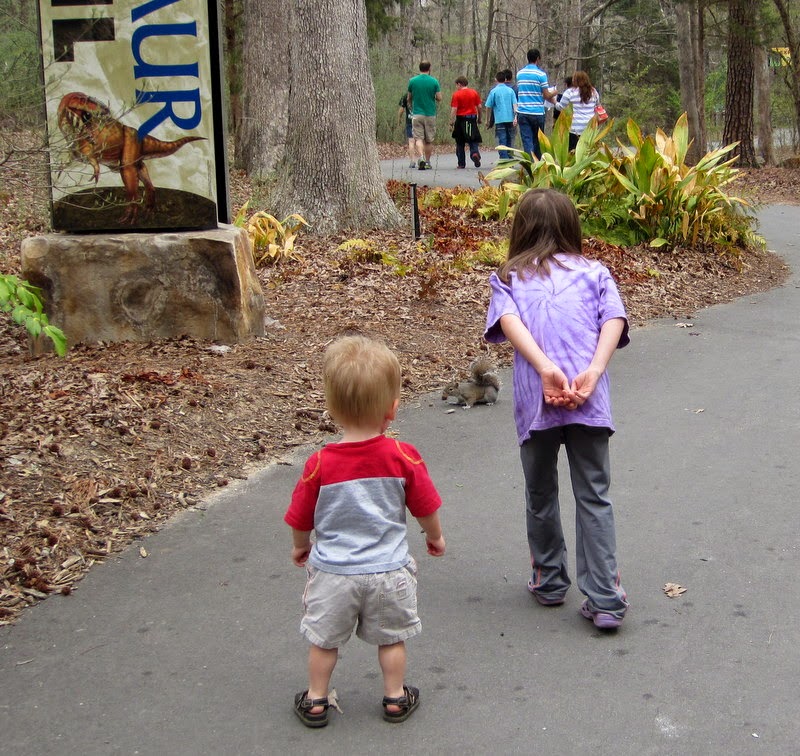 Next we headed for Into the Wild so that we could see the lemurs. One of Miriam's nicknames is Memur-lemur so she's rather fond of lemurs. Rachel and Benjamin raced down the boardwalk together. Benjamin's sandals are a little heavy for his feet so he walked rather heavily, clonk-clonk-clonking all the way down the trail. 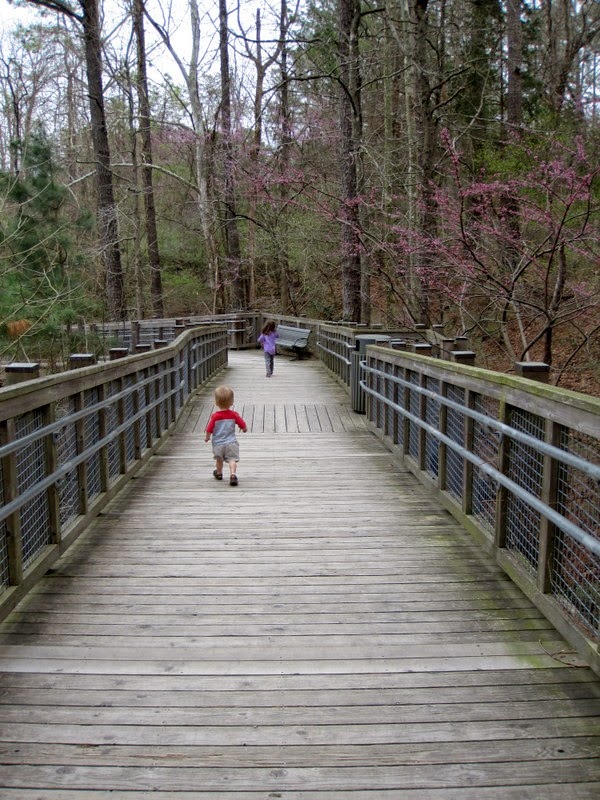 Miriam was upset that everyone wanted to be outside. There are bees outside—carpenter bees!—and she hates bees. It didn't help matters that she had to brave the boardwalk because carpenter bees are out in full force looking for lumber to drill holes in so they can build their nests inside. We encountered several bees along the trail. Miriam was not impressed. 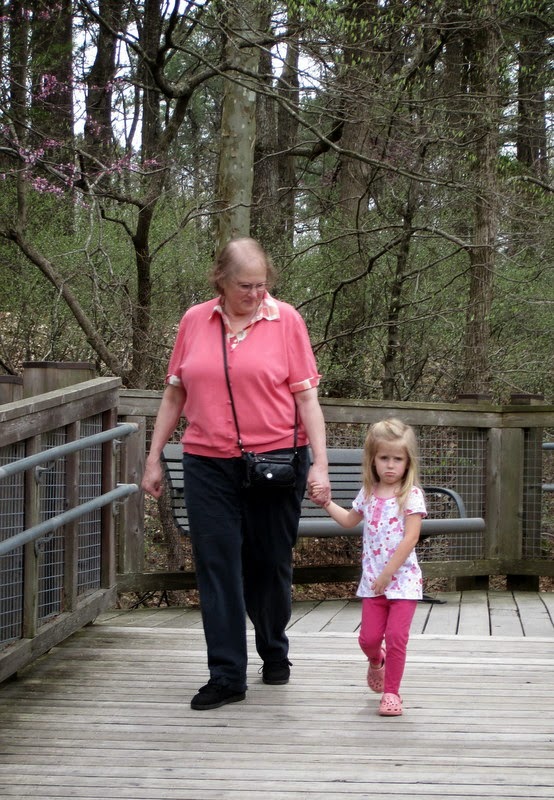 We also saw some reptiles and amphibians along the way. At first glance I thought this snake might be a water snake, but I suppose it could also be a corn snakes. I don't actually like snakes very much so I don't spend a lot of time trying to get close to them. But this one wasn't a pit viper (nor was the other one we saw). 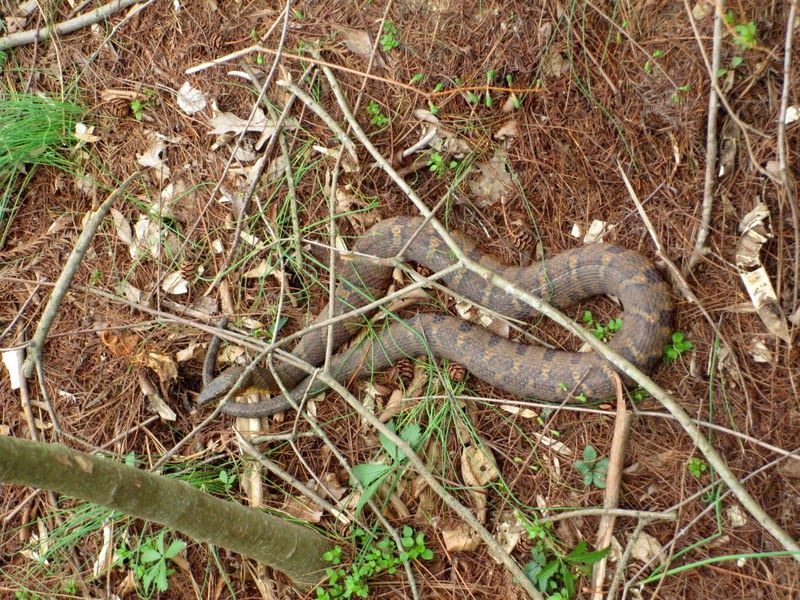 We also spotted this big frog: 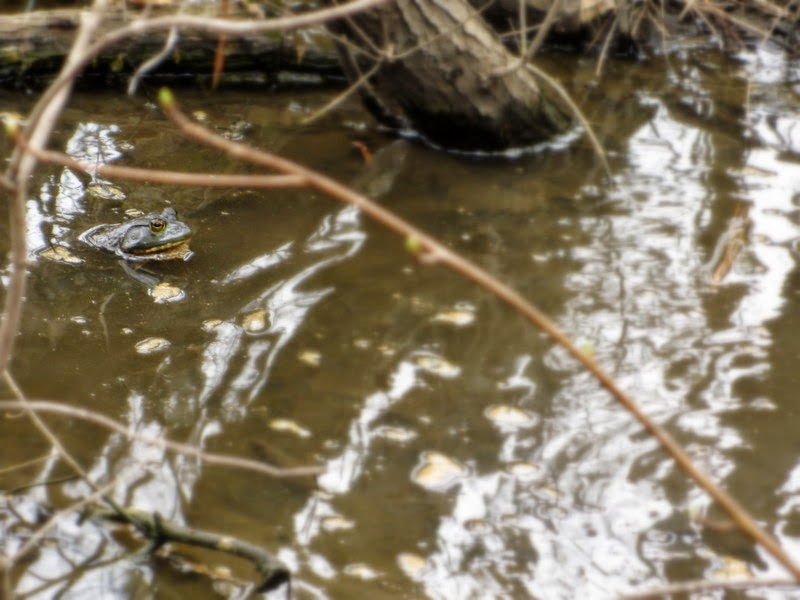 Grandma was the best at finding these creatures tucked away off the trail. I need to get better at looking for things like this because who knew there were so many snakes lurking about?! *shudder*

They're slowly turning the water features back on (the kids were quite upset that Into the Mist wasn't on yet—next week, children, next week). The erosion table was pretty popular this afternoon. Poor Benjamin is a little too short to reach the water still but he's pretty good at figuring out solutions to his height dilemma. 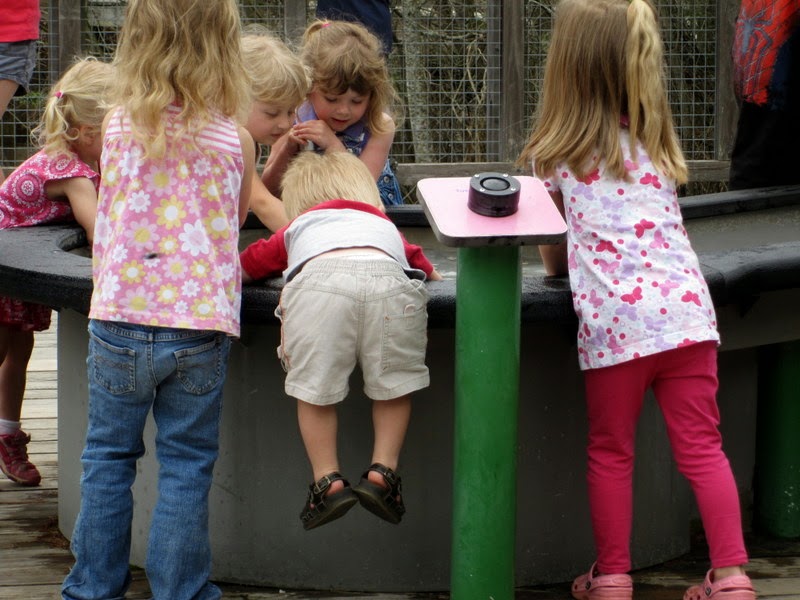 Benjamin found some pebbles and started tossing them into the water. He tricked this goose into thinking he was going to feed it. Every time he threw in a rock, the goose would quickly swim to the splash, looking for bread, but the rock was already at the bottom of the pond. Silly goose. 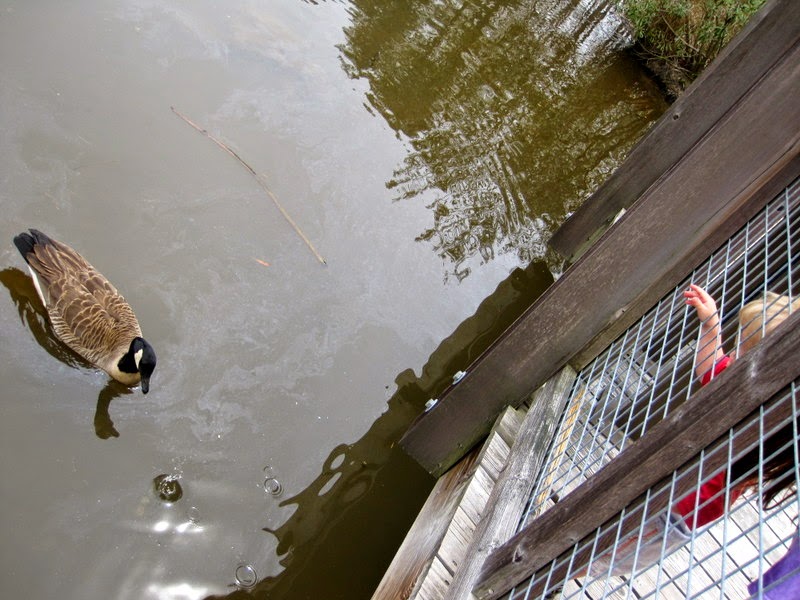 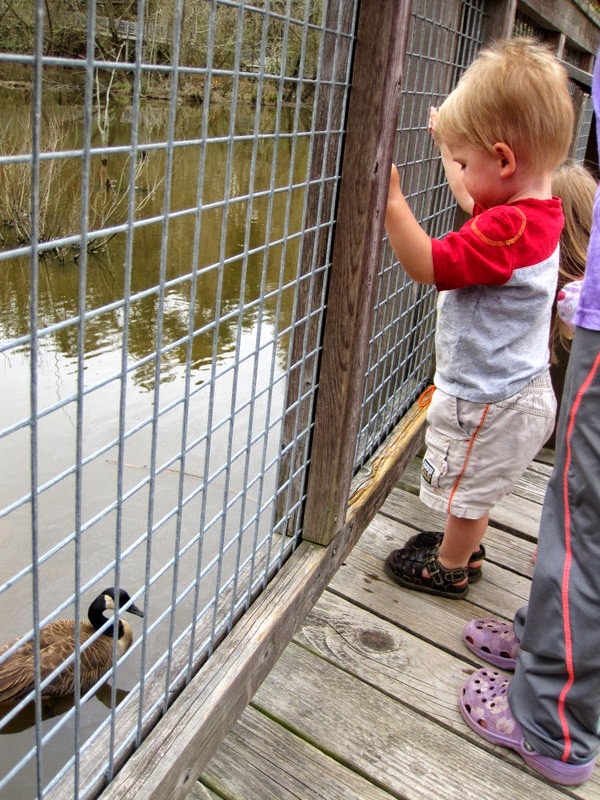 We lucked out with the bears and wolf exhibits. At the first bear look-out we couldn't really see the bears and I had always jus thought we were out of luck but it turns out there's a second look-out. It's just past the wolf exhibit—and the wolves were out pacing today, rather than hiding away in their tunnels. 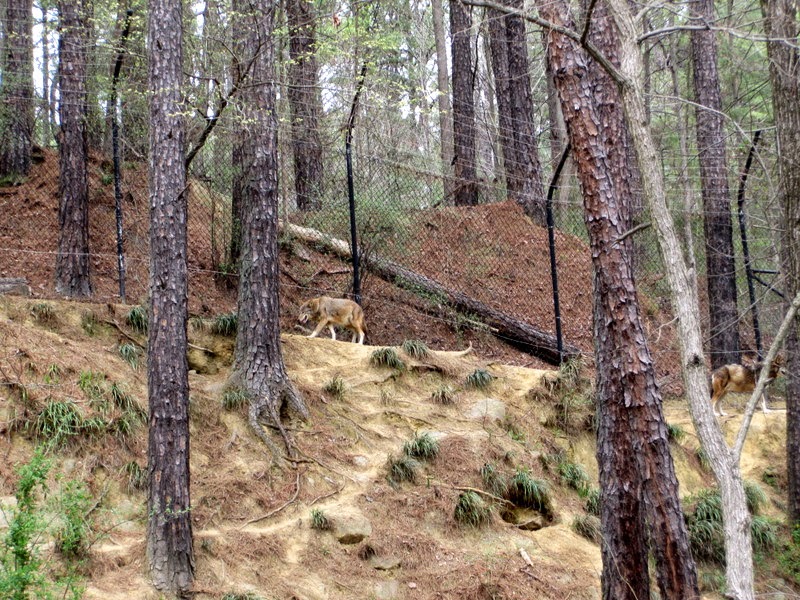 The red wolf is critically endangered and so these wolves are kept in captivity as part of the "species survival plan."

At the second bear look-out the bear was just pacing along the fence, right in front of the crowd. I used to think it didn't come to the waterfall on the other side of its enclosure because it didn't like having all the people staring at it but it turns out it was just sticking to where it could be even closer to people. There's no accounting for taste, is there? 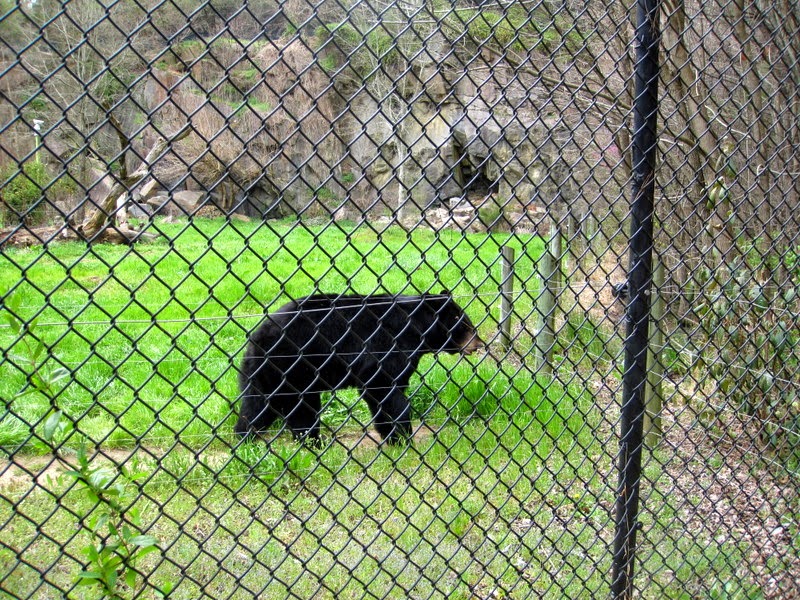 I didn't get a picture of Miriam with the lemurs, who were out enjoying the sunshine today, because it was a little crowded. Perhaps later I will. She was excited to see them, anyway. 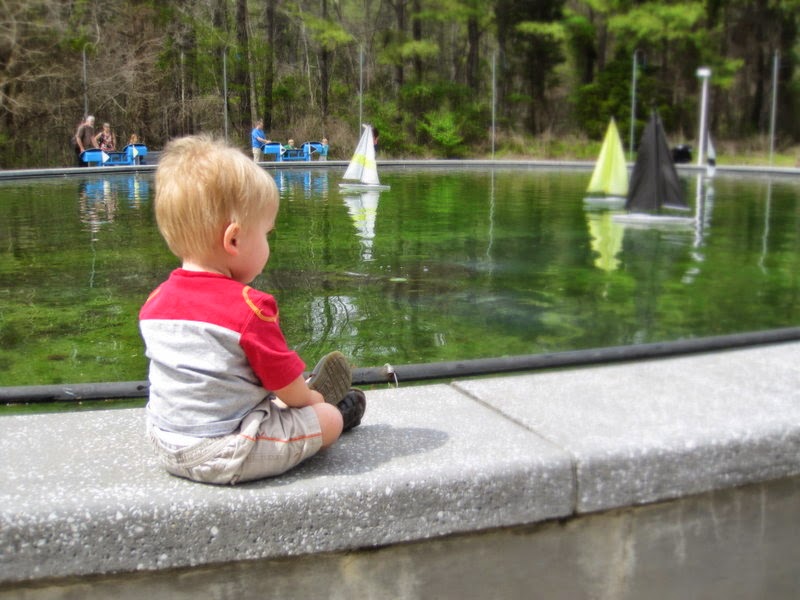 We stopped by the boat pond but none of the boats were available and Benjamin kept threatening to go swimming so we moved on to the butterfly house. 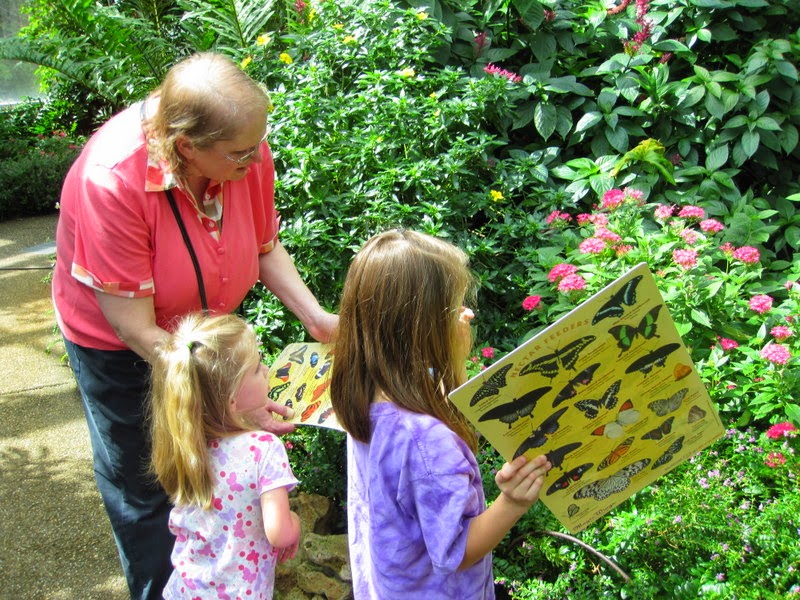 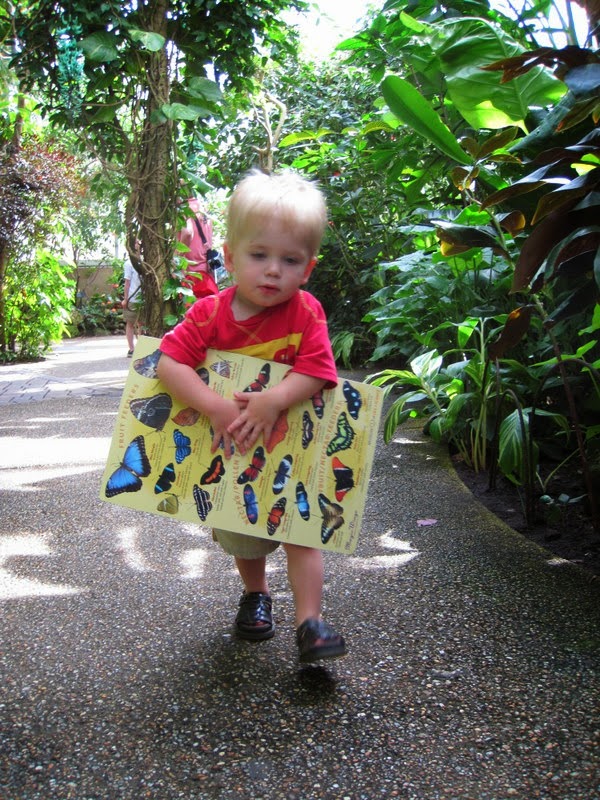 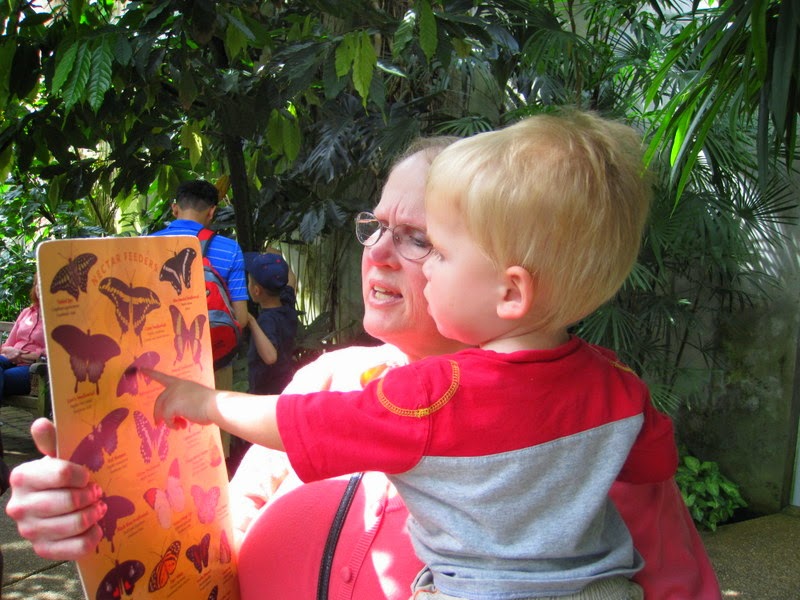 We timed our arrival just about perfectly and had only ten minutes to wait for the next butterfly release. Unfortunately, it wasn't as fun as the last time. The butterflies were ready to spread their wings and fly—not many of them stuck around to wait for their wings to dry on an admirer's finger and the ones that did didn't get passed to us. It was kind of a bummer, but I think the kids were ready to go anyway so although Miriam pouted a bit no one threw a huge fit. 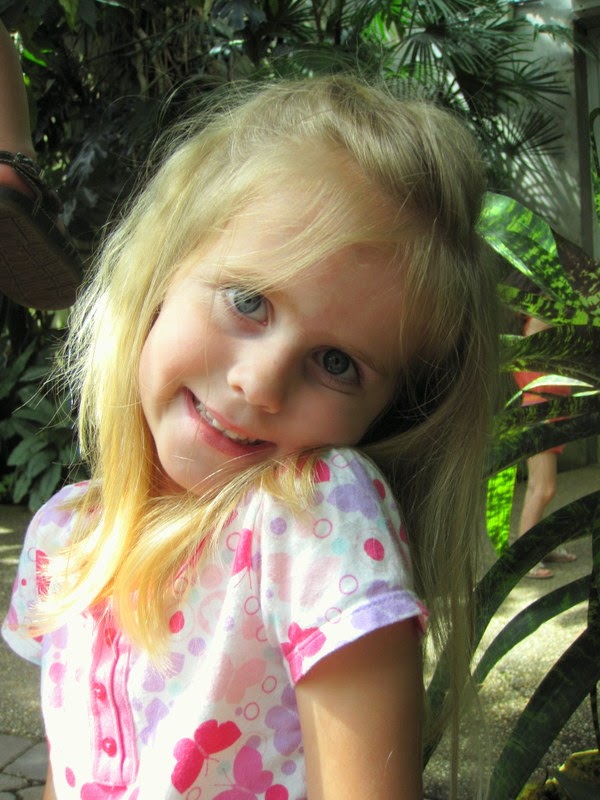 It was a fun afternoon!

This weekend, of course, was spent watching General Conference, which was wonderful, and skyping with the family. Grandma, the girls, and I also sanded the deck to get it ready to stain. Daddy and Grandma did a bit of staining between conference sessions yesterday and tomorrow we'll do a bit more (Rachel's committed to 'babysitting' Benjamin so I can help—we'll see how that goes).
Posted by Nancy at 10:55 PM