Monday at the Museum

On Sunday Miriam started coming down with whatever Daddy had on Saturday, right in the middle of sacrament meeting, of course. When that girl gets hit with a fever she gets hit fast! She didn't want to go home, so she just sat on my lap through sharing time and then sat on Grandma's lap when she was supposed to go to class. Since she was just sitting, sucking her thumb, and pulling her ear, I wasn't too worried about her sharing germs.

Grandma and Grandpa went to an open house a friend threw in their honour and spent the evening visiting with their old North Carolina friends. We chilled at home and put the kids to bed so we could play game when Grandma and Grandpa came home.

Miriam still wasn't feeling all that great in the morning so we decided to stick around town, heading out only to the Museum of Life and Science for a couple of hours. Grandma made the trip memorable by letting us ride the train—so exciting! 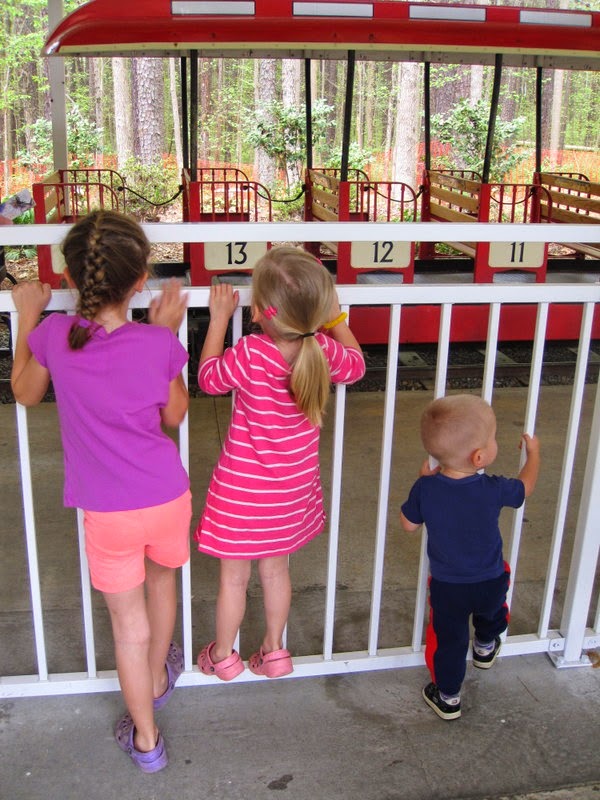 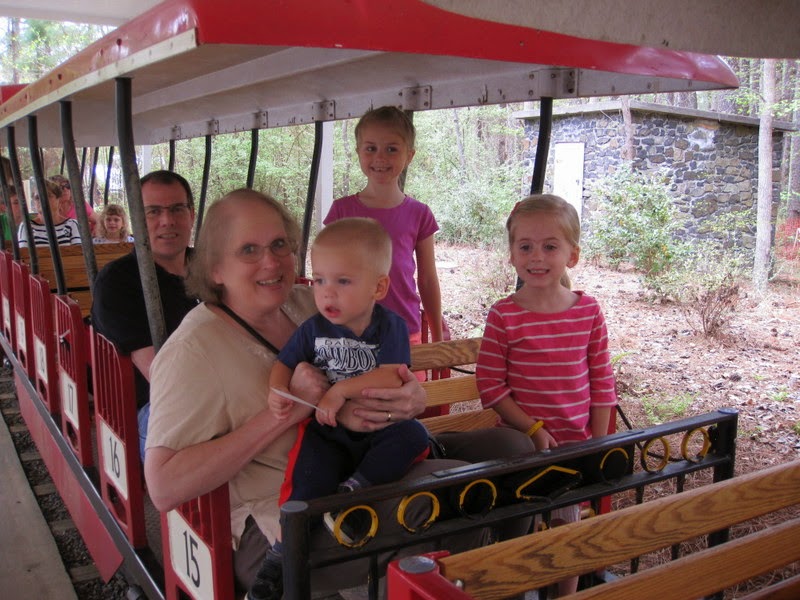 By the way, I cut Benjamin's hair. On Saturday night, I think. It was getting ridiculously long and now it's ridiculously short.

"I see he got his summer haircut," our neighbour Lee remarked when he saw Benjamin.

Benjamin wasn't the only one to get a summer haircut. The poor alpacas got buzz cuts, too. They looked pretty silly with their fluffy hooves and tails and heads and nearly-naked bodies (they reminded me of the short Boundin'). 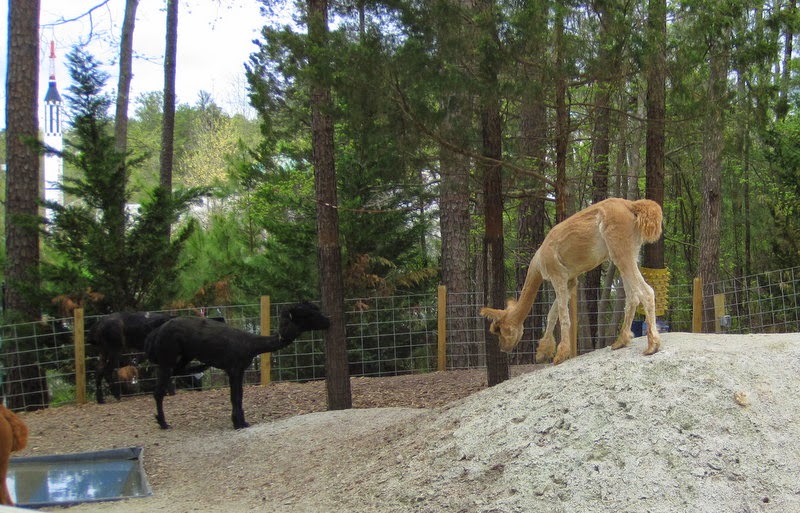 The kids were excited for the Dinosaur Trail (because when aren't they?). 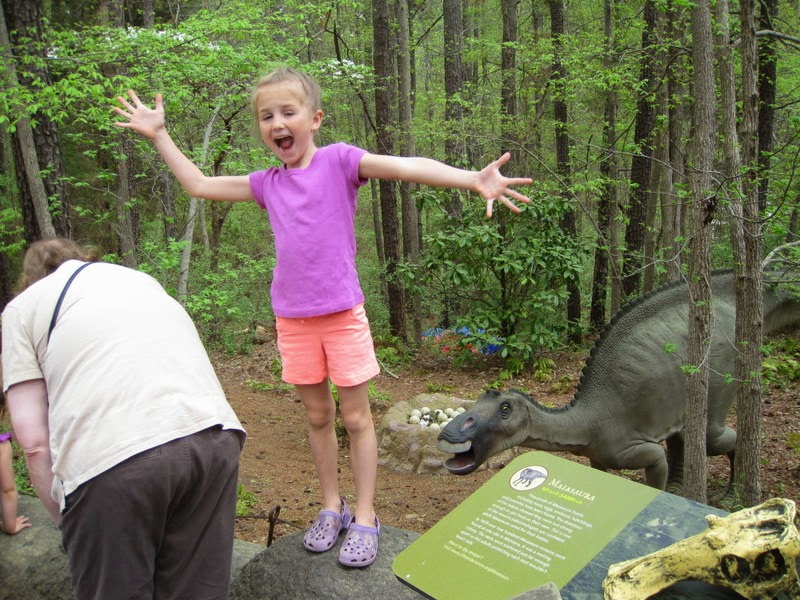 Benjamin always needs a little extra moral support when passing by the albertosaurus. 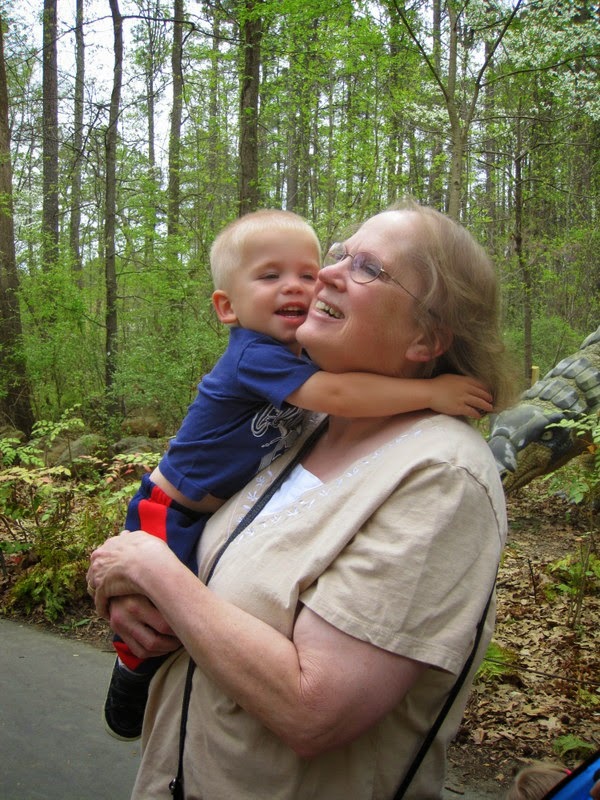 And here's Rachel posing by an edmontonia. 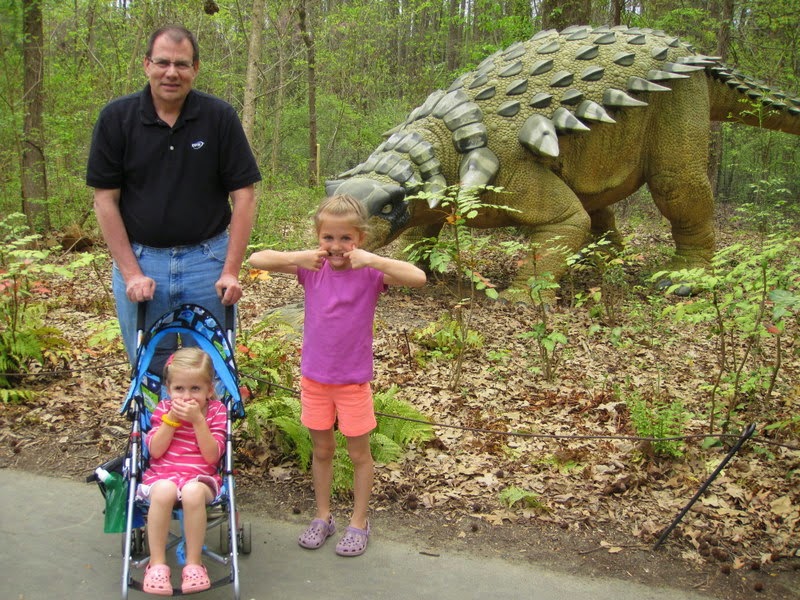 Her pose is courtesy of this picture of her Daddy and Aunt Katharine at the Museum of Life and Science way back in the day (circa 1990): 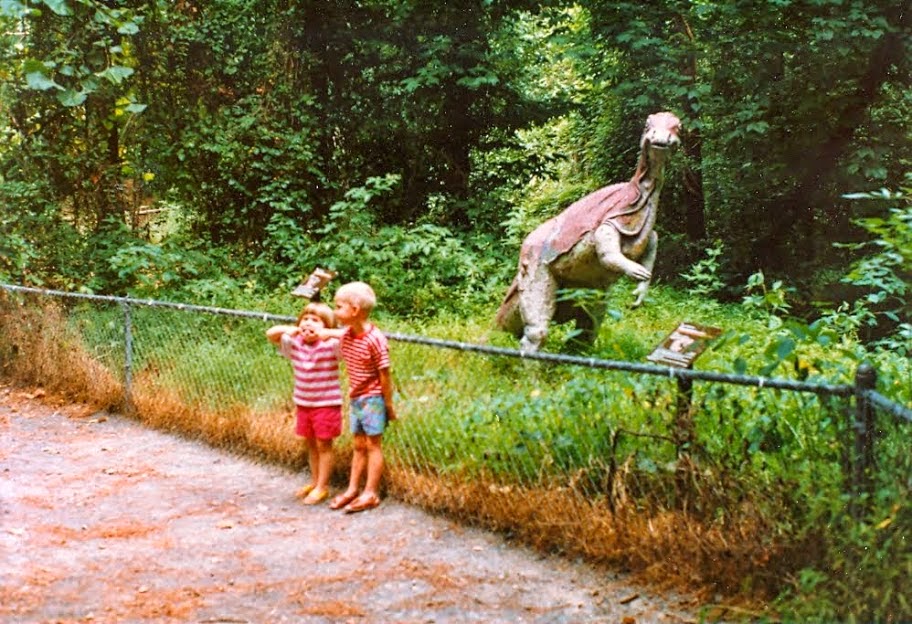 And here's one more shot for good measure because Miriam simply wouldn't cooperate: 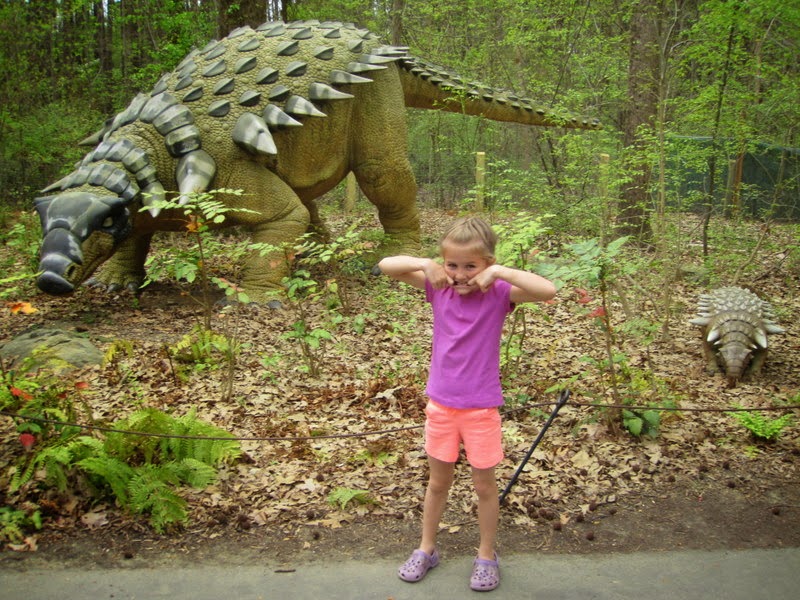 We'd brought the stroller for Benjamin to ride in, but I believe it was Miriam who sat in it the most, which was probably best because her fever came back with a vengeance later in the day (tipping 104°F—this girl is the queen of febrility).

And here's Grandpa helping Benjamin reach for a longneck: 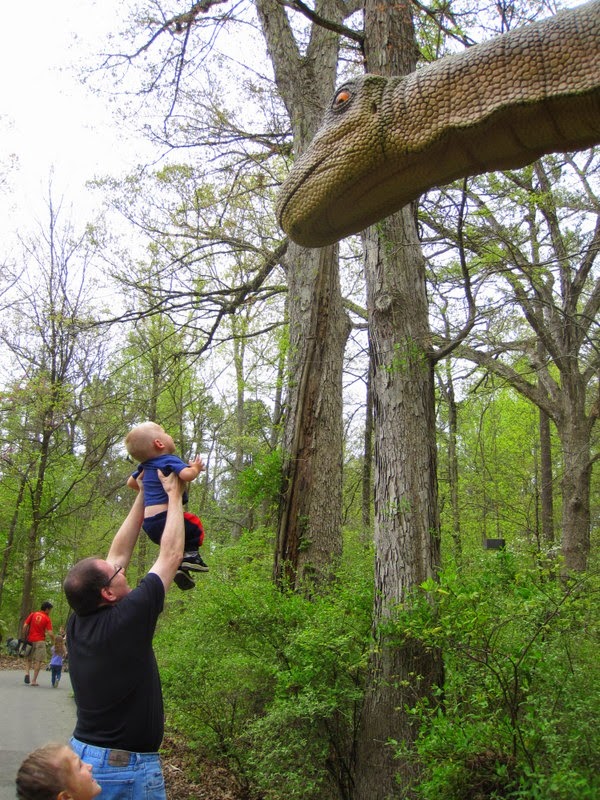 And another flashback to the 1990s with Katharine and Andrew and a different longneck, same museum: 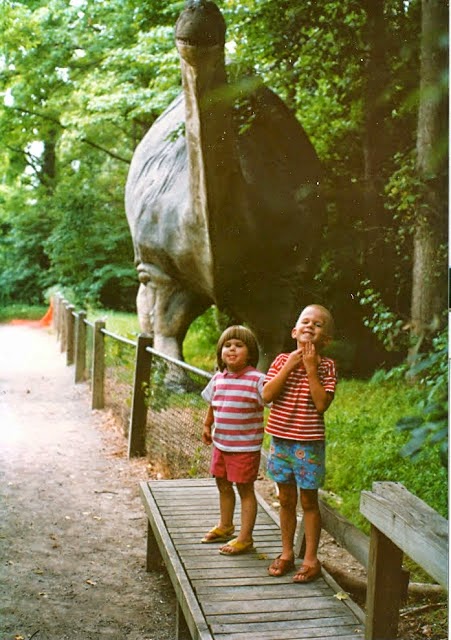 The kids were excited to find the parasaurolophus empty. 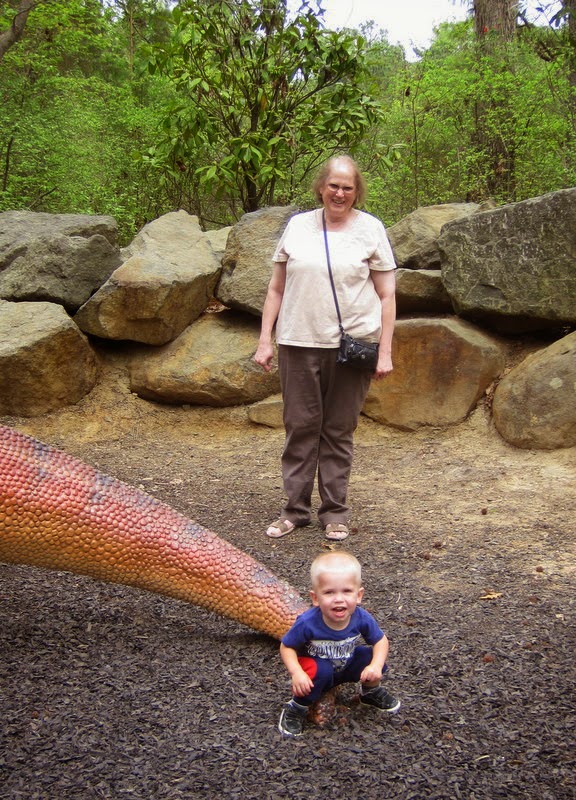 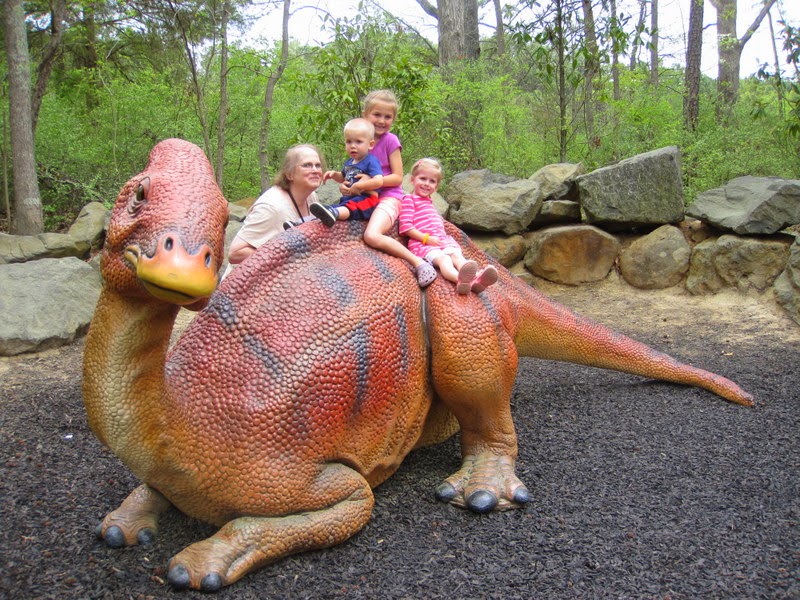 Benjamin wasn't too sure about being up there... 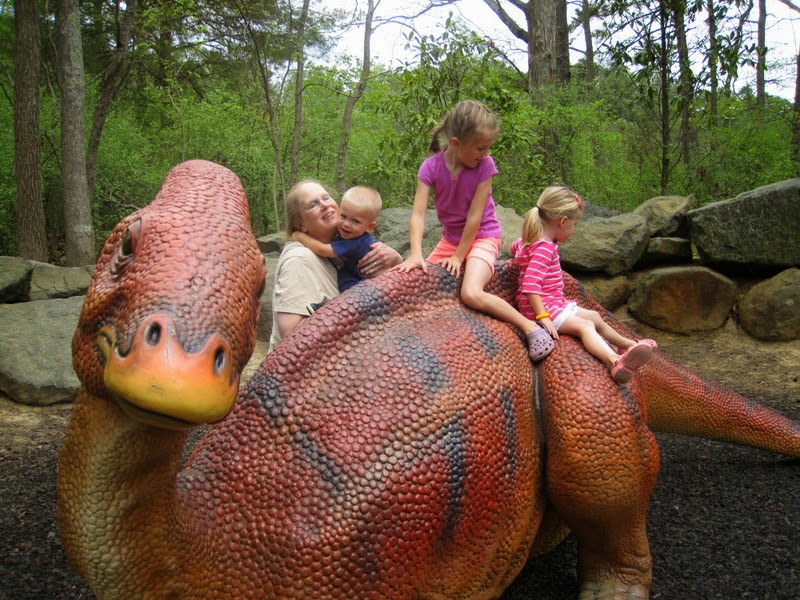 Miriam was remarkably brave and decided to try sliding down the parasaurolophus's tail. She's usually not that excited about climbing on things... 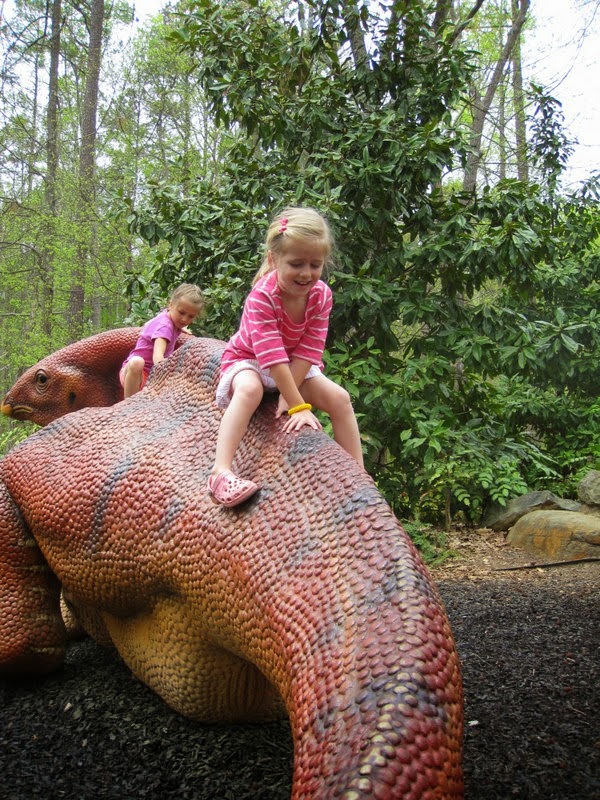 Inside we played at the Falling Sand exhibit where you can use your shadow to catch the virtual sand that falls from the top of the screen. It's really neat to play with, really. 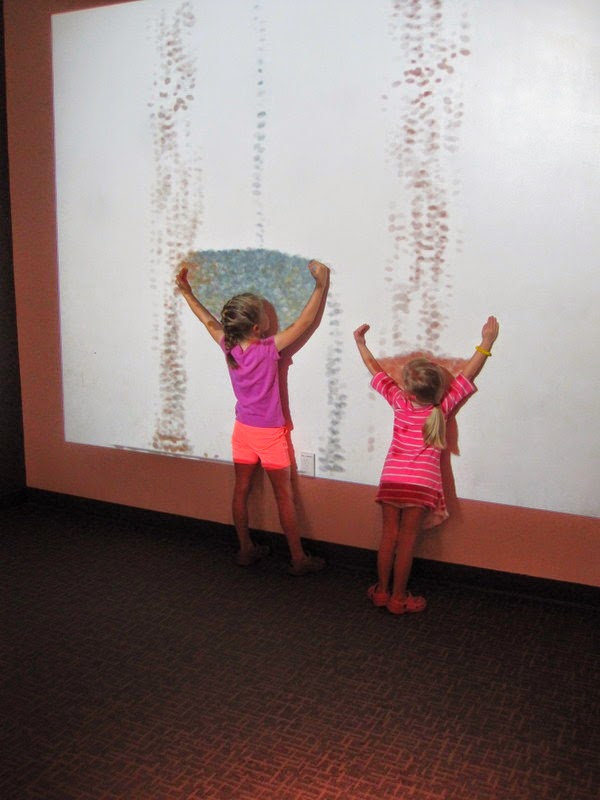 We walked through the wildlife room (where they have new baby 'gators) and enjoyed learning about perspective. 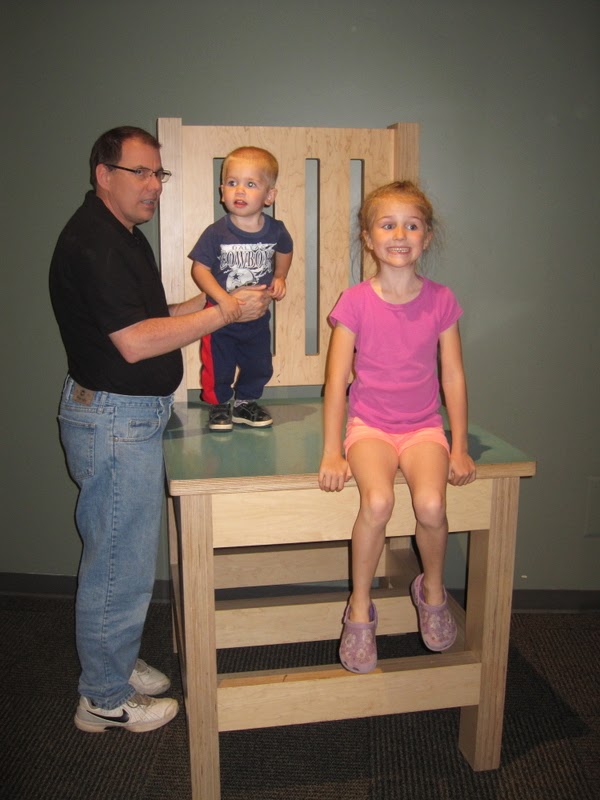 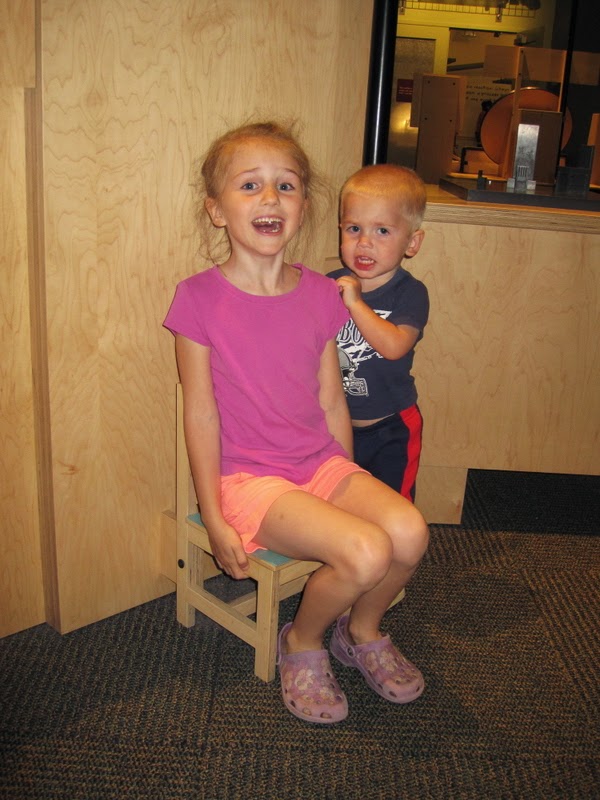 And then we came home and rested and brought down Miriam's fever and laid low. We also had FHE, so expect an interview with Grandpa up soon.

Oh, I should also mention that Benjamin wore underwear to the museum and did great! I think this was his first outing in undies—big day for him.
Posted by Nancy at 7:21 PM