Grandma dropped Grandpa off at the airport in the wee hours of Tuesday morning. We joked that he came like a thief in the night—arriving after the kids went to bed on Thursday and leaving before they got up in the morning on Tuesday. We took it easy the rest of the day. Both Miriam and Grandma were sick with whatever Andrew and Miriam were sick with before. We took a lot of naps, we watched a lot of shows, we did a lot of quiet playing and reading. That was all.

Oh, we had Andrew bring home Cook Out for dinner, too. It was just that lazy of a day.

On Wednesday everyone was feeling much better. We spent the morning playing playdoh. The girls wanted to make a "free samples" section like at Costco. We had free samples of bananas and blueberries, pomegranates and lettuce, lemons and carrots, oranges and mangos, and whatever it is we decided the white stuff was (I can't remember). 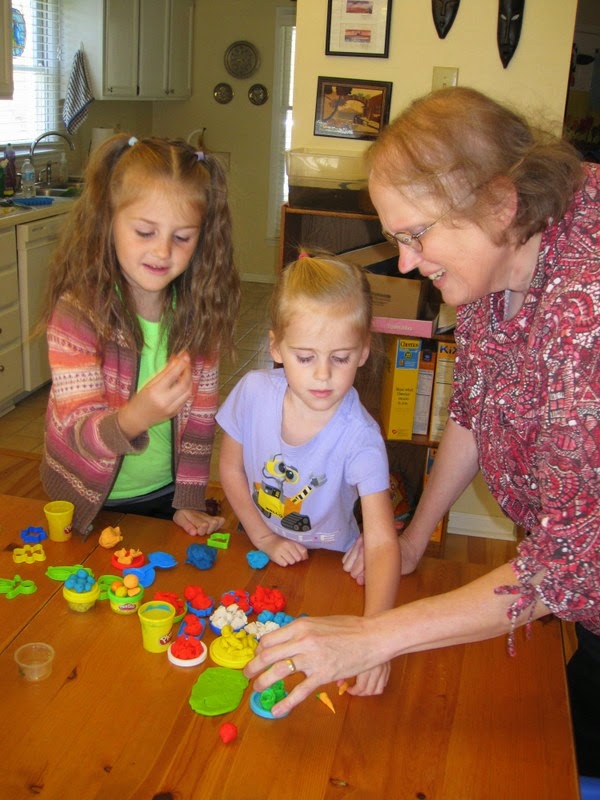 Here's Grandma pretending to peel a banana so she can eat it. 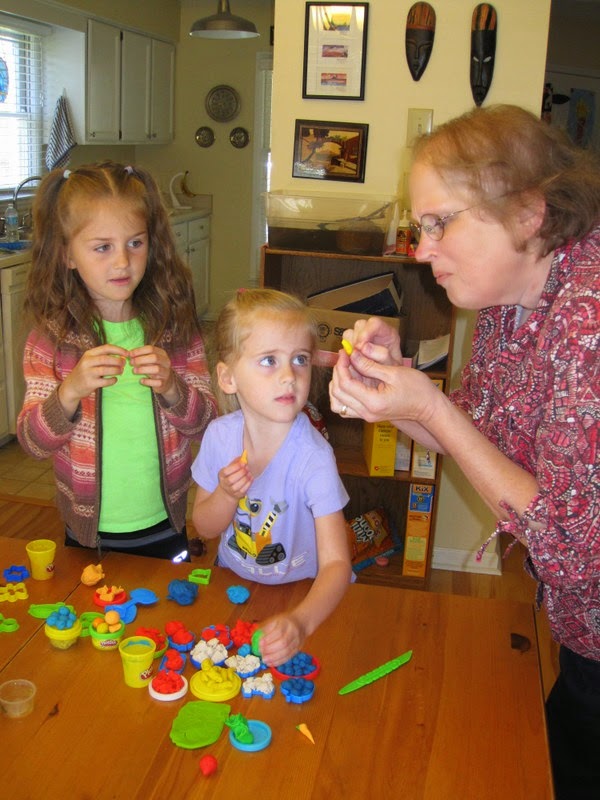 And here's Benjamin doing his own thing on this side of the table: 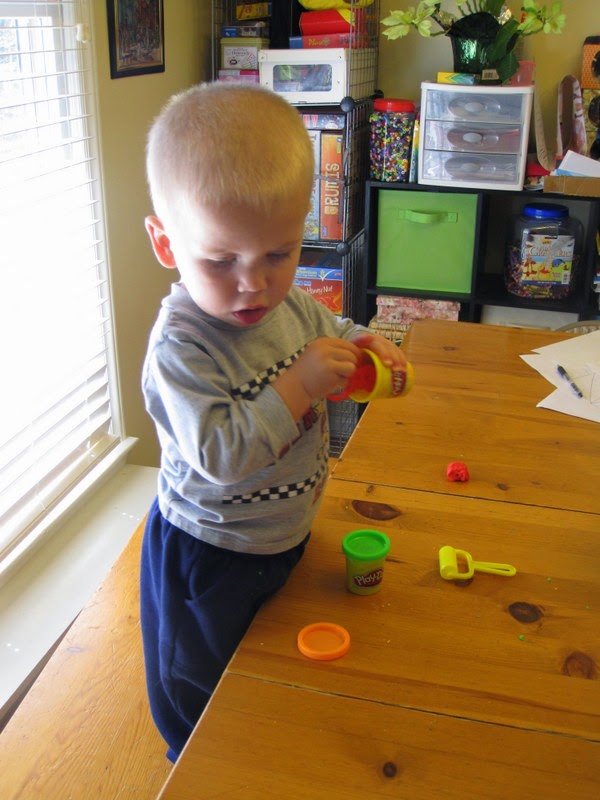 In the afternoon Grandma took the girls out to a movie. They wanted to see the new Muppet movie (that was listed on the theater's website) but it's no longer at that theater and they ended up showing up at a bad time, too—all the other kid-friendly shows had started. The manager let them in to see Rio 2 (which had just barely started) with a three-for-one ticket for the inconvenience.

The girls had so much fun! Benjamin was a little bummed out to be left at home so I let him choose a show to watch before his nap. He chose Dinosaur Train. Whoever came up with that idea is a genius.

Benjamin was mesmerized (it was his first time watching that show) and then he and I went down for a lovely nap together. For dinner we made macaroni and cheese. From a box. As per Miriam's request.

She doesn't eat very much when she's feeling sick so I was happy to get some calories in her. She was happy there were leftovers and, as promised, at the rest of them for lunch in the coming days.

On Thursday Daddy taught his last stats-to-Kazahks class. Grandma continued to stain the deck and while I was putting Benjamin down for a nap the girls built a fort out on the deck. They left their pillows and blankets out there when they went across the street to play. When Daddy came home he lay down on the deck because it was so warm out there and so cold in our house.

"You're going to fall asleep out here," I warned.

I woke him up about an hour later. 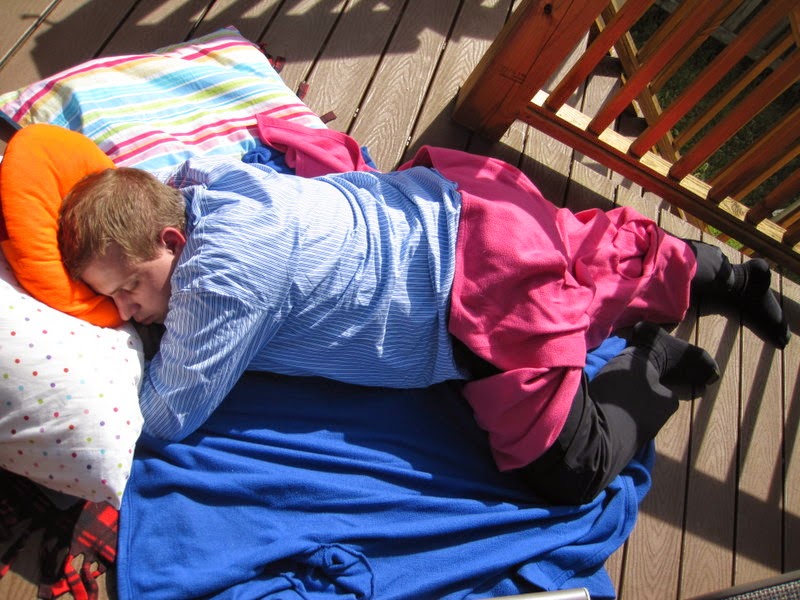 Benjamin helped me since he had just gotten up from his own nap. 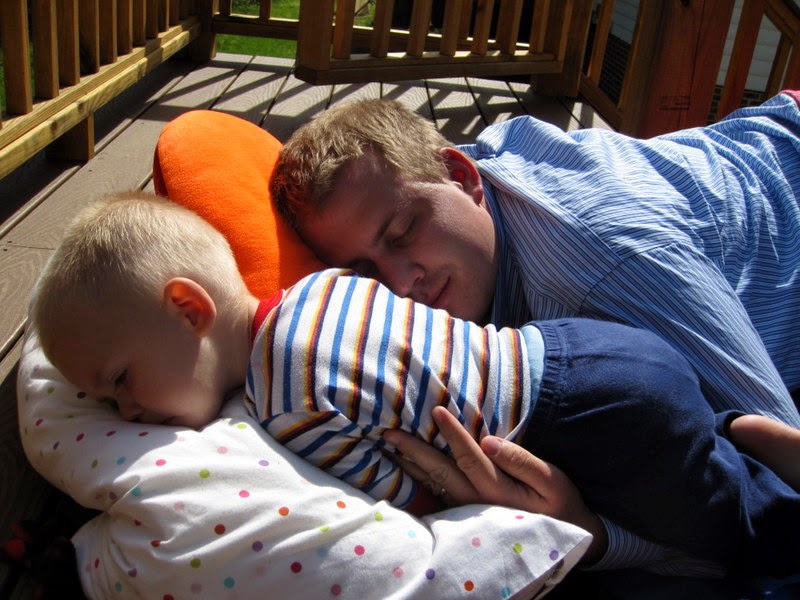 And isn't he just the cutest? 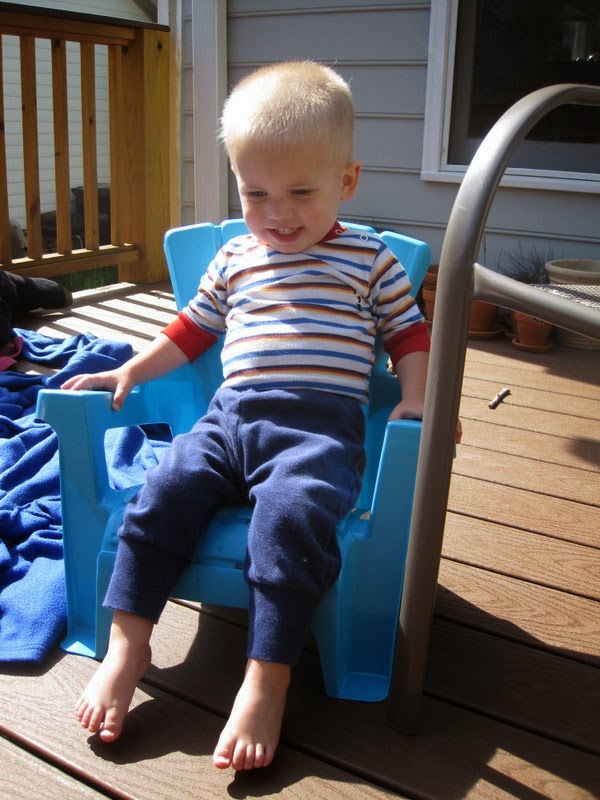 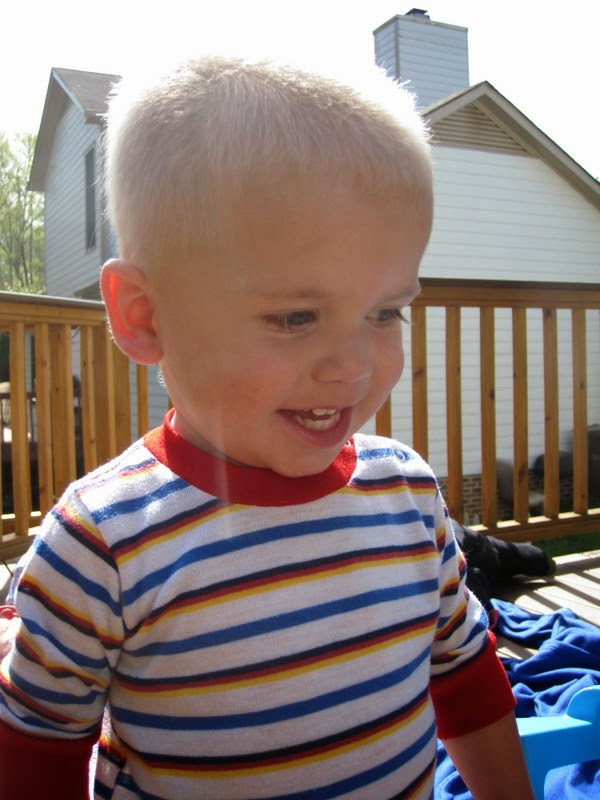 For dinner we went to Cracker Barrel—our first time there. I think Rachel's favourite part was the peg solitaire games they had on the tables to play with while you waited. I was the only one to beat the game—leaving only one peg on the board—while Rachel managed to clear all but two. She was getting pretty good at it and now she wants a peg board more than anything in the world (so I showed her this).

After dinner we stopped by Duke Gardens to walk off some of our overindulgence. 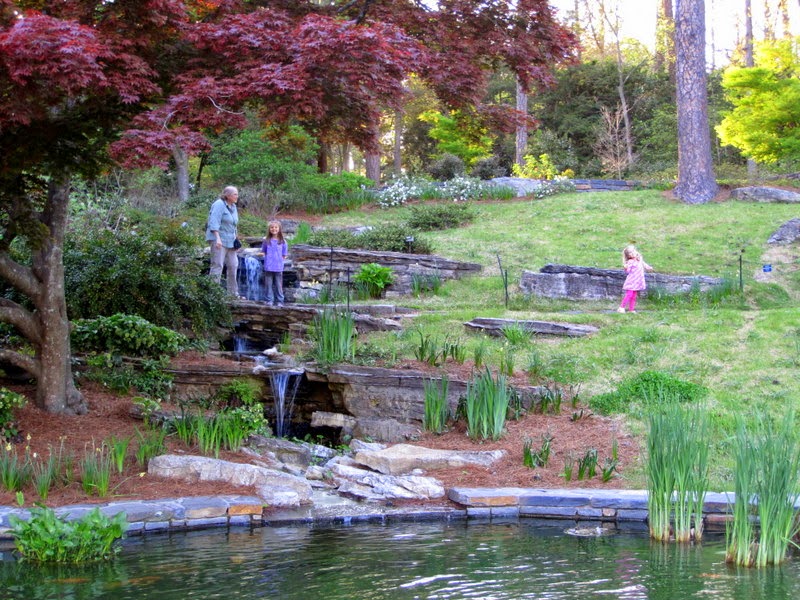 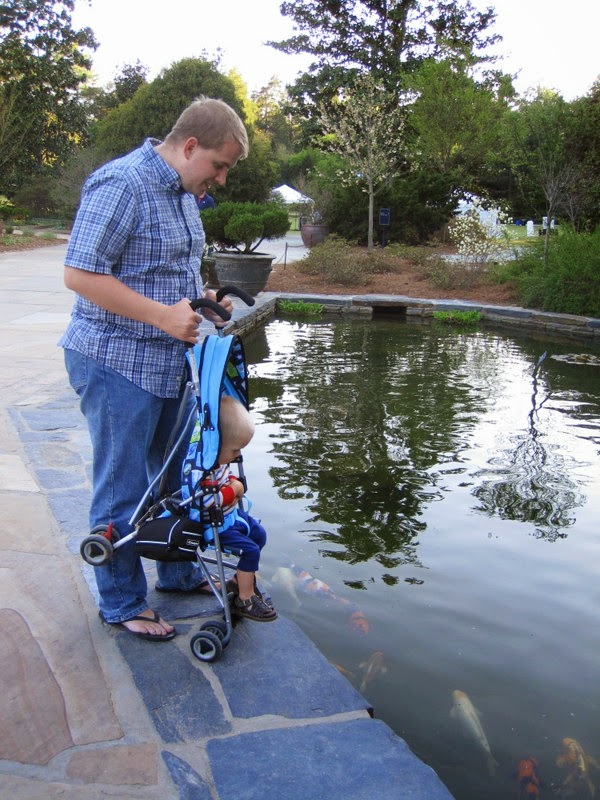 So did the girls: 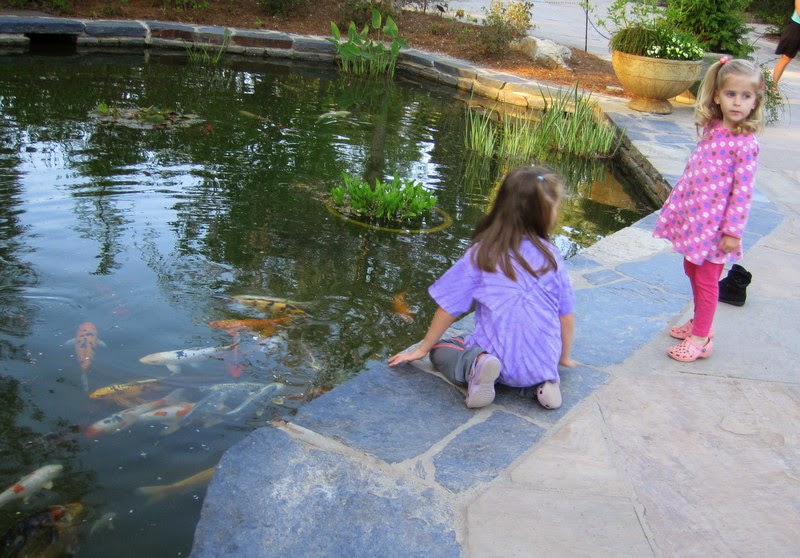 We wandered around the tulips, which are all fully in bloom, though no one was really in the mood to pose for any pictures. Benjamin, though, has recently decided that he's big enough to walk up stairs without using his hands for support. It's kind of nerve-wracking to watch but he's pretty good at catching himself when he falls. 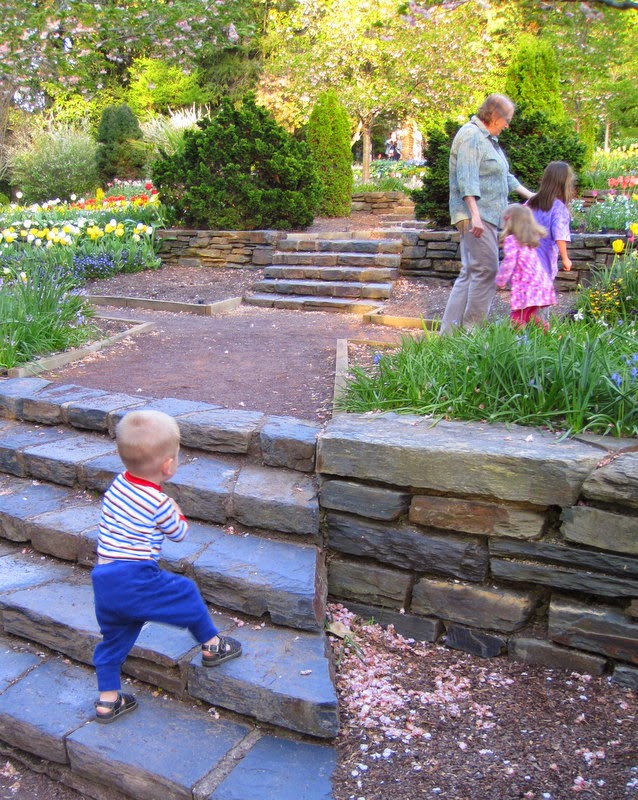 Rachel was excited to run into her friend Dylan from school/dance. Dylan's family helped us find the bamboo forest. The girls tried—and failed—to climb the bamboo. 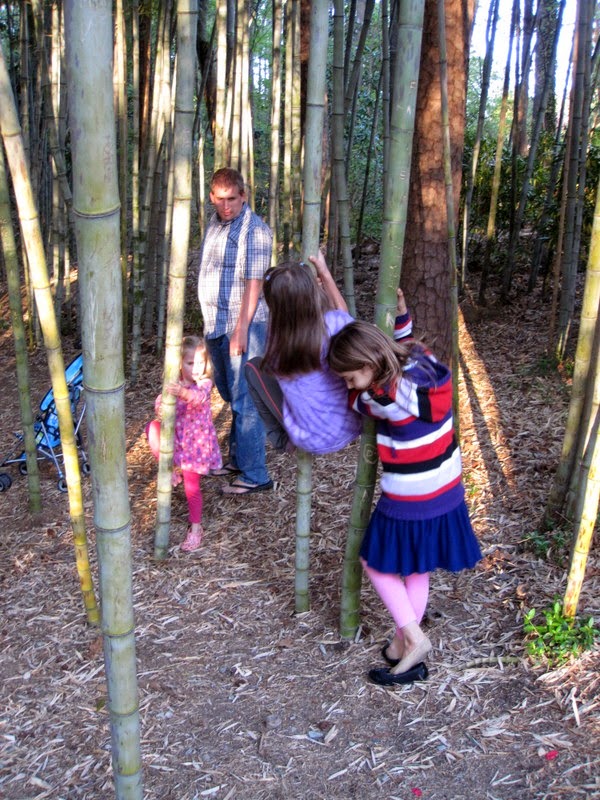 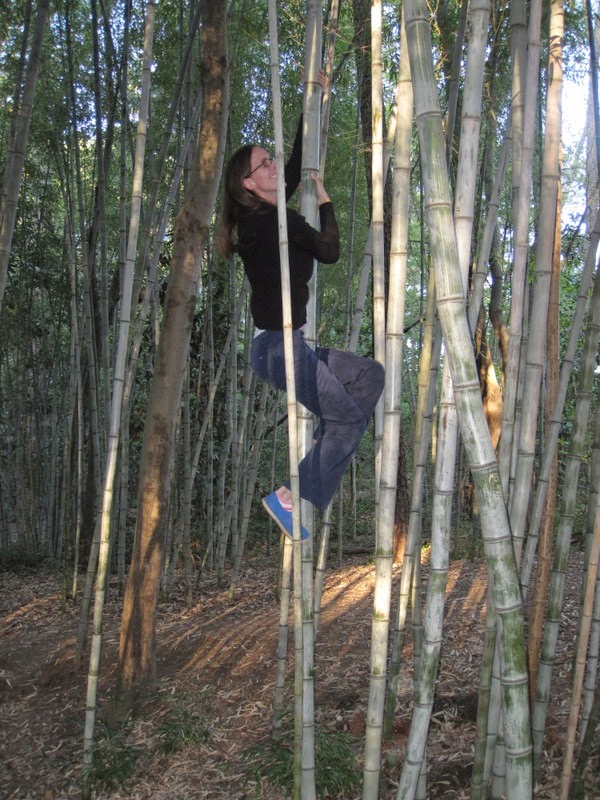 All Benjamin wanted to do was throw stuff in the water. 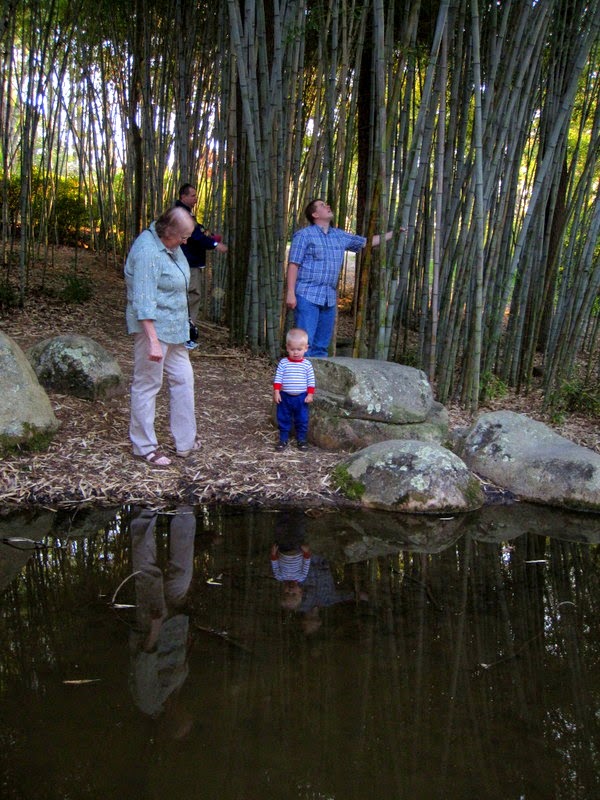 The verbs this boy can say really cracks me up: jump, bounce, bonk, throw, go, zoom. Clearly he's interested in very boyish things. Sometimes I really can't understand how he learned all these things. Somehow he just knows.

The bamboo forest was our goal for some reason—I'm not sure if it was Karen who wanted to see it or Andrew—and once we saw it we turned around to head home.

Rachel crawled across the wall of this bridge: 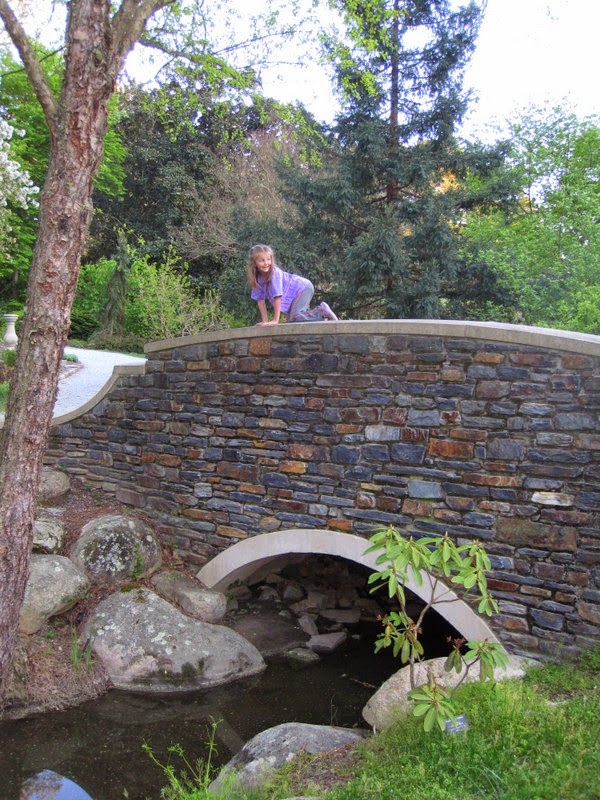 Andrew dared her to stand up but she wouldn't take his dare (smart girl).

At some point Miriam took over the stroller, which always upsets Benjamin, so he got to ride on Daddy's shoulders, which usually makes him happy. 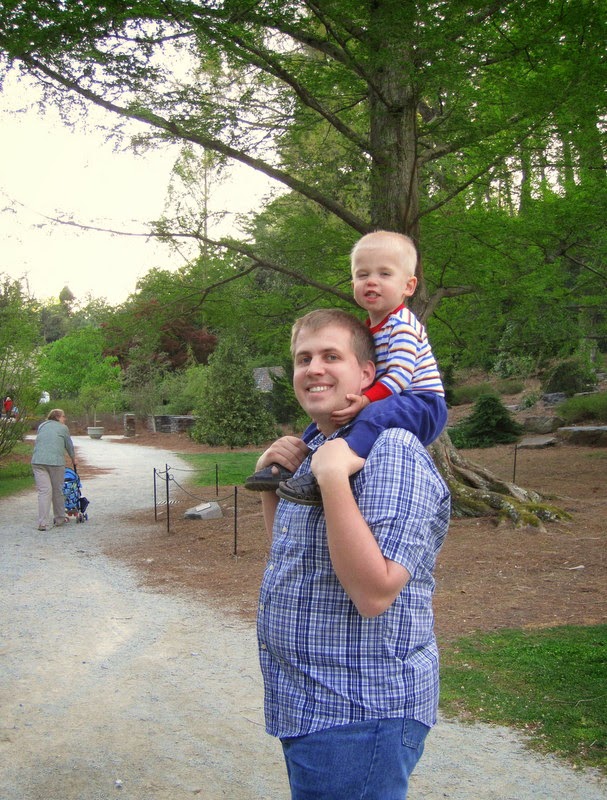 Rachel decided she wanted a lift, too, and then right as I was about to snap a picture of her riding on Andrew's leg Benjamin poked Andrew in the eye. Poor guy. 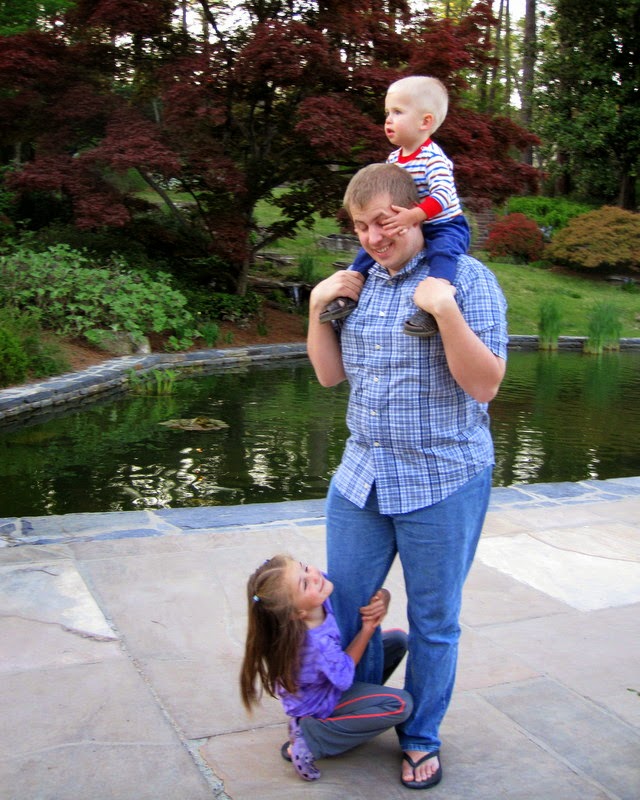 Rachel found an inchworm (a caterpillar of the geometer moth) and carried it all around Duke campus before depositing it on a tree right before we left. She used her hands as a treadmill of sorts. That poor caterpillar just kept on inching along and along and along (and getting nowhere). 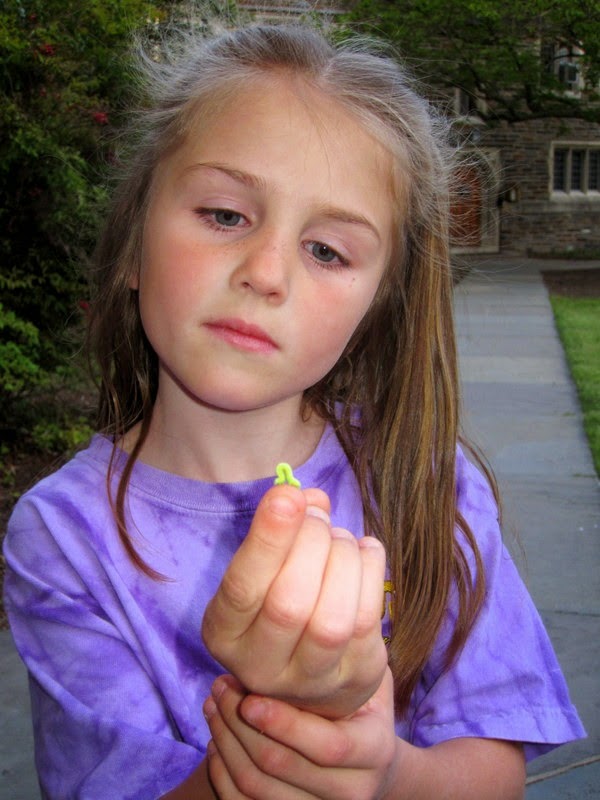 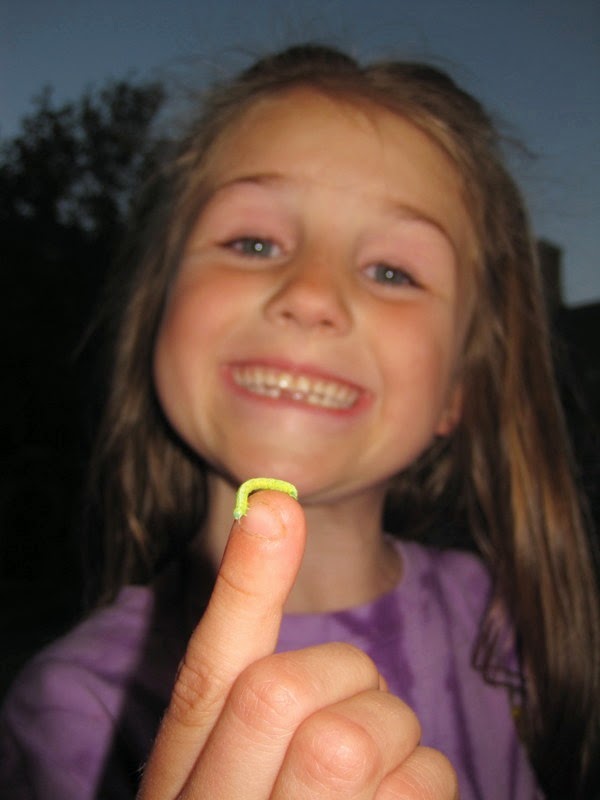 Once we were back at home and the kids were dressed in their jammies, they settled in for one last story time with Grandma: 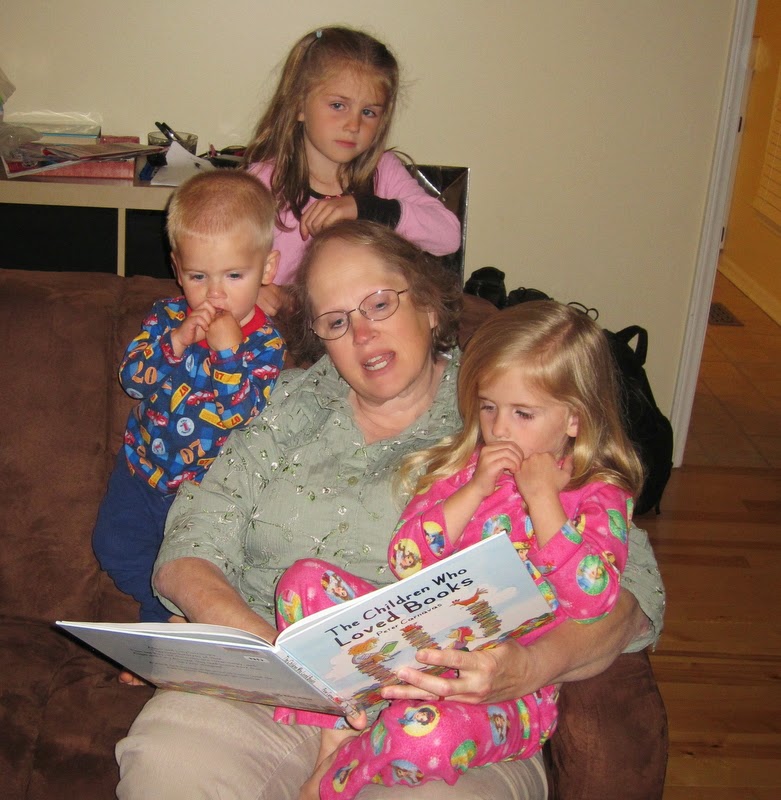 They sure were sad to say goodbye to Grandma. All the "one last" things were hard for them.

Grandma loves all her grandchildren, of course, but when we were living with Andrew's parents she and Miriam developed a special bond—they just relate to each other. I think Grandma will always understand Miriam better than I do. And that's okay. They're good buddies. This isn't to say Grandma cares about Miriam more; it just means that they've always had an easy relationship. It's pretty cool to watch two people get along together so seamlessly. They just pick up right where they left off every time they see each other.

Just the other day she had to go have a cry in her bed because she "hadn't even played on anyone's iPad all day!" Now that we're back down to one iPad life is sometimes tense. But school starts up again on Monday so then we can get back to our normal schedule and it looks like we're due for some sunshine again so perhaps we can have more sun-time and less screen-time.
Posted by Nancy at 5:09 PM