Our sweet little tadpoles are beginning to sprout their forelimbs, which means it's almost time to let them go. Andrew asked me if I was going to cry when the time came. I told him no. But I guess we'll have to see. I might be a little obsessed with these froglets.

Last night when we noticed their forelimbs coming in I put a plastic lid in their container, just in case anyone wanted to climb up for a rest on something without having to scale the cliff face of the rock in there. This morning I found that one little froglet was checking out its plastic lily pad. 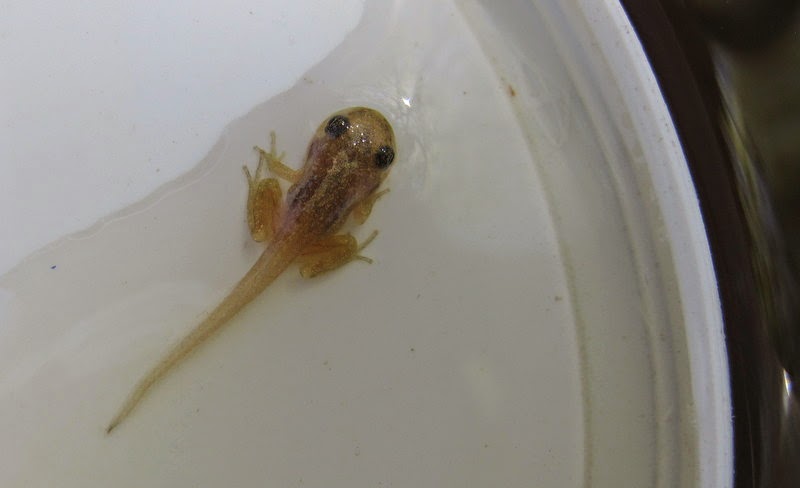 I'm quite sure all our frogs are the same species since they were all floating together in one big spawny blob but their markings are quite different. Some are very light and others are very dark. 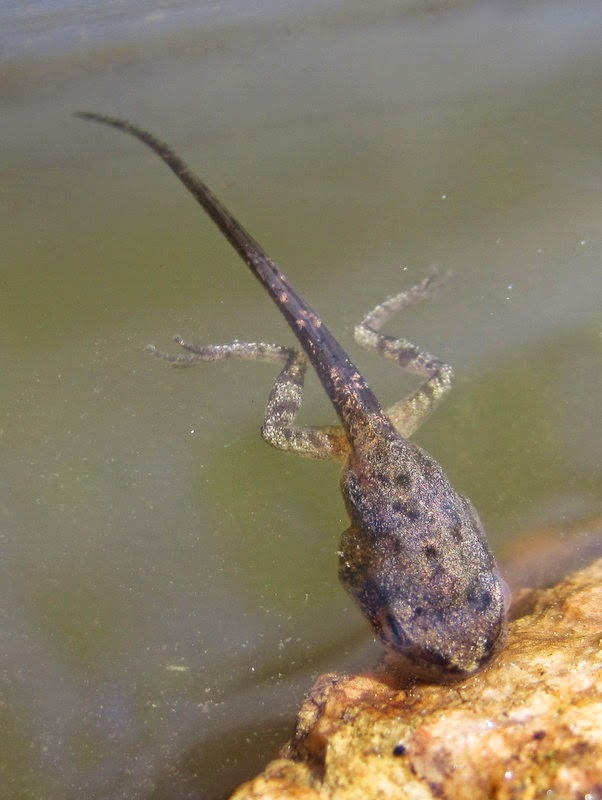 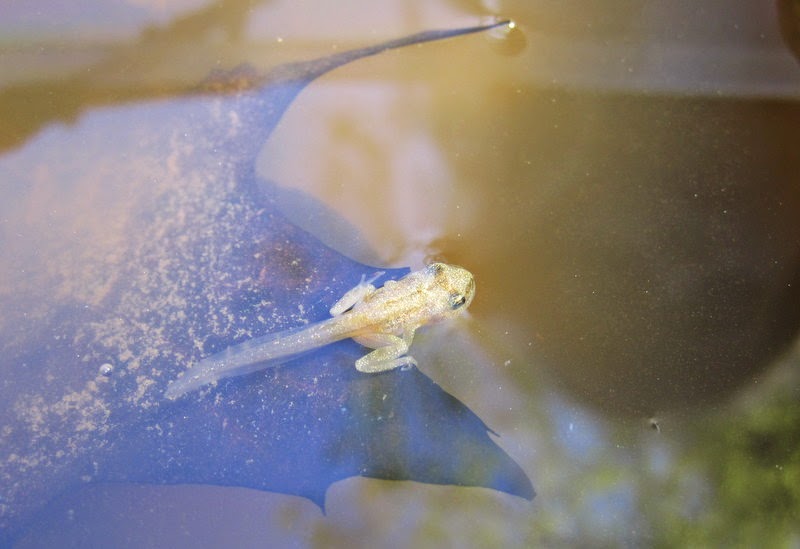 It's interesting to me how even though all the frogs started out at the same stage of development—they were all just a little black dot when we found them—they're all over the spectrum one month later. We have froglets hopping around, with their back legs strong and their forelimbs spindly. We have some frogs with one forelimb and one nubby stump waiting to turn into an arm. We have lots of tadpoles with only their hind legs. We even have a couple that have yet to sprout any limbs at all. One little tadpole is certainly the runt of the group—it's so much smaller than the rest, but still growing strong!

It made me think of human embryonic development. Recently I had a friend exclaim on facebook that she was 37 weeks pregnant and so excited to be full term! Baby could come at any time! Yippee!

I shared an article with her—from The American Congress of Obstetricians and Gynecologists, not Yahoo.com or anything like that—about the new definition for full term, which was recently narrowed to include only two weeks of pregnancy: 39 weeks to 40 weeks and 6 days.

I explained that 37 weeks is considered term, but only early term, and that she should keep counting down to her due date, which is the best time for a baby to come. Imagine if your baby was born at 37 weeks but your due date had been miscalculated by a week—your baby could end up in the NICU with underdeveloped lungs (and trust me it's easier to develop those lungs on the inside the womb than on the outside).

She curtly thanked me for the information but explained that she'd recently completed a birthing class where she was told by a nurse that 37 weeks was full term, so there.

As the mother to a preemie I felt a little angry at that nurse, giving mothers the "it'll all be great if you have a baby now because you're full term—yay!" line. She certainly needs to brush up on recent studies.

Babies in utero are much like the frogs in my tank. Sure, there are windows of development—those email reminders from pregnancy.com (et al) that say things like, "New this Week [2]: Webbed fingers and toes are poking out from your baby's hands and feet!" or "Your Pregnancy at 19 weeks: Your baby weighs about 8 1/2 ounces and measures 6 inches, head to bottom," or anything like that—leave plenty of room for lagging behind or zooming ahead. (And even they say that full term is 39 weeks—so those nurses in Southern Utah need to subscribe to some journal or another, really).

The article at the ACOG states, "'This terminology change makes it clear to both patients and doctors that newborn outcomes are not uniform even after 37 weeks,' said Jeffery L. Ecker, MD, chair of The College's Committee on Obstetric Practice. 'Each week of gestation up to 39 weeks is important for a fetus to fully develop before delivery and have a healthy start.'"

I 100% agree—and I can see it with my very own eyes because my frogs (who are all the very same age) are in wildly different arenas developmentally.

The little froglets are so much fun. They're already hopping around and climbing on things. I made a makeshift lid for their tank and put it on the front porch. I need to find a better place for it (probably by the creek) but I'm afraid Benjamin will get into it.

Anyway, here are too many pictures of my little frogs—I think they're adorable: 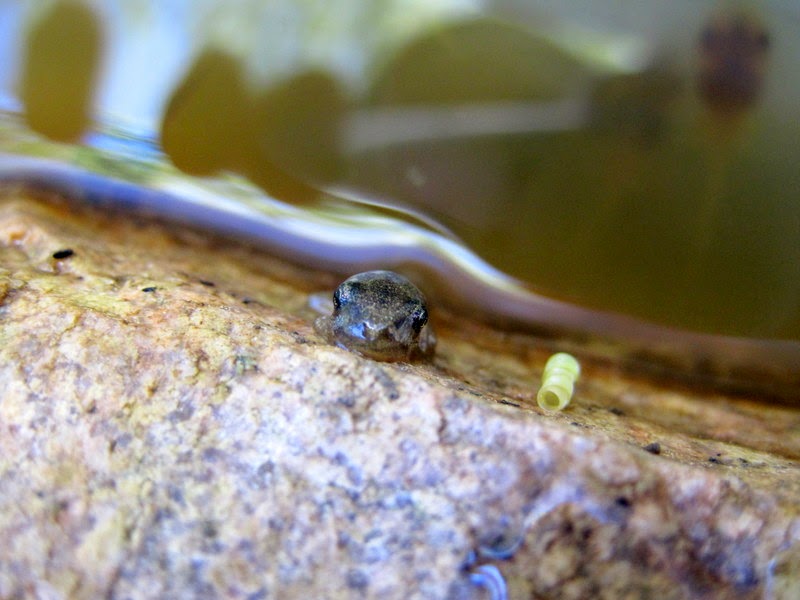 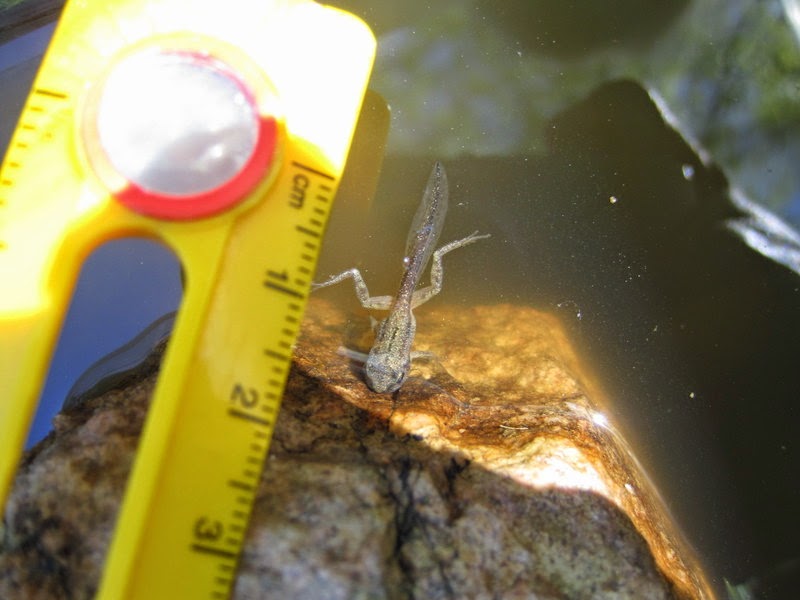 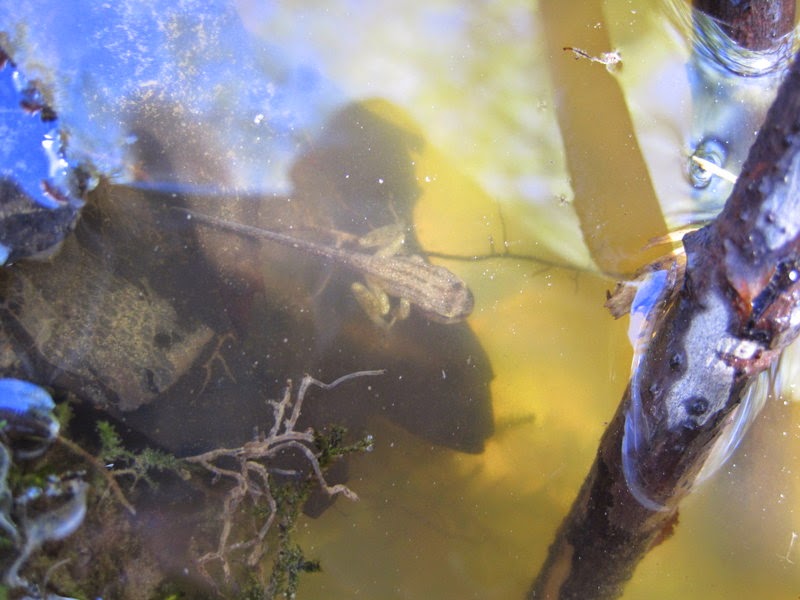 This little one was hopping around my hand for quite a while: 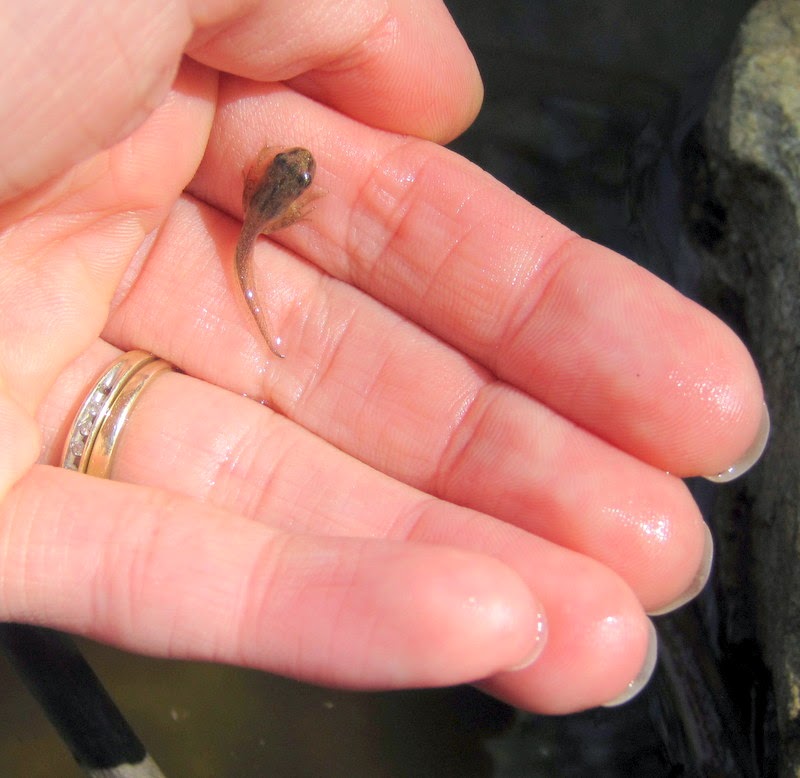 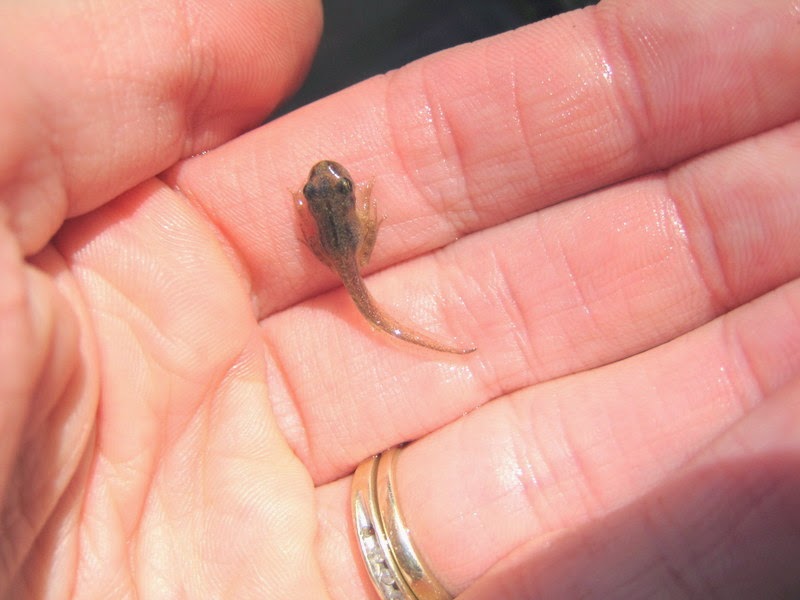 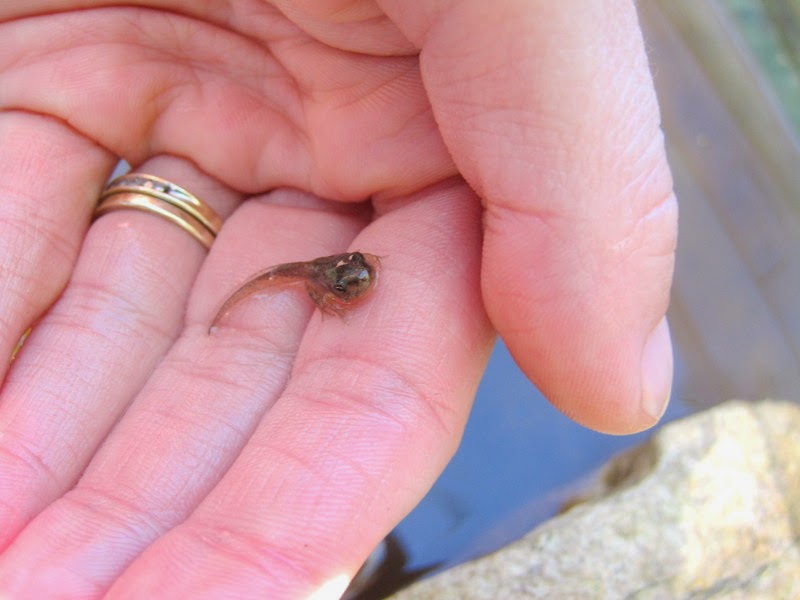 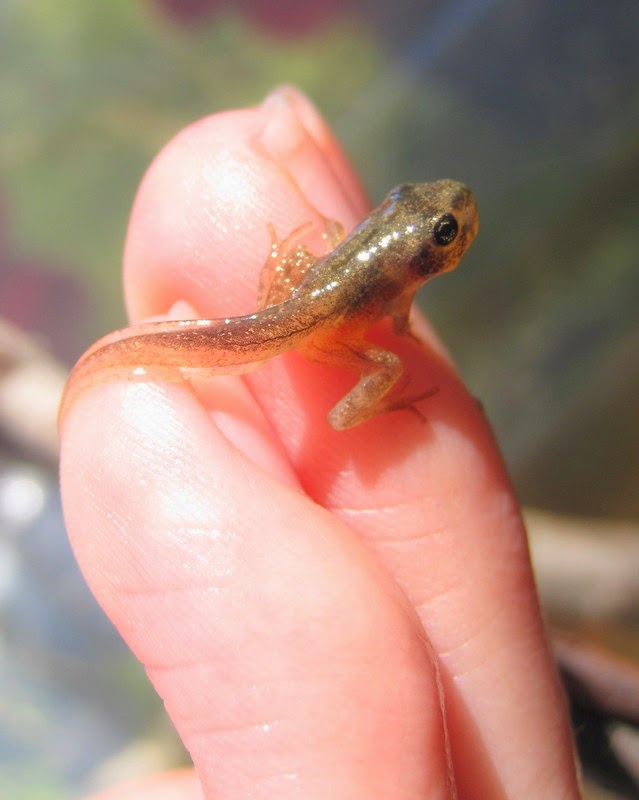 When it jumped back into the water Benjamin squealed and clapped his hands. "Gog! Jump!" he said. 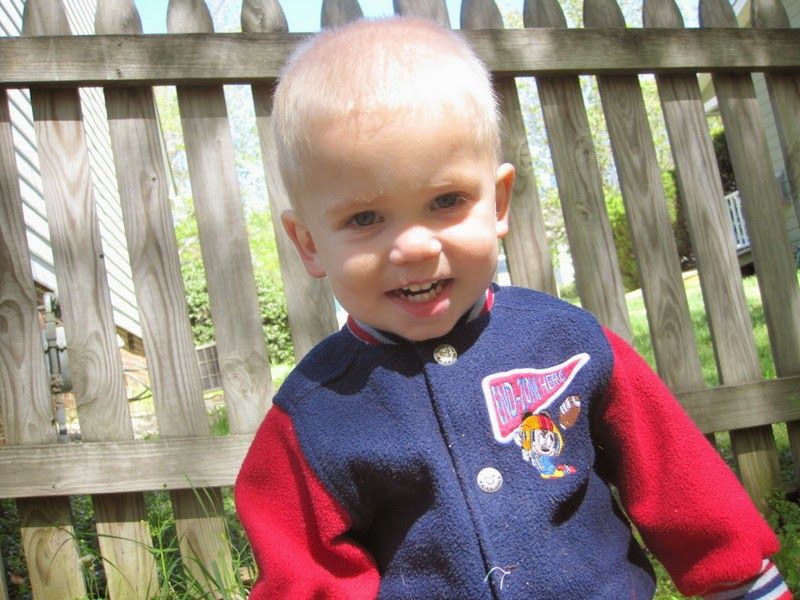 Here are some more pathetic attempts to measure the frogs. They didn't like the ruler and kept crawling away. 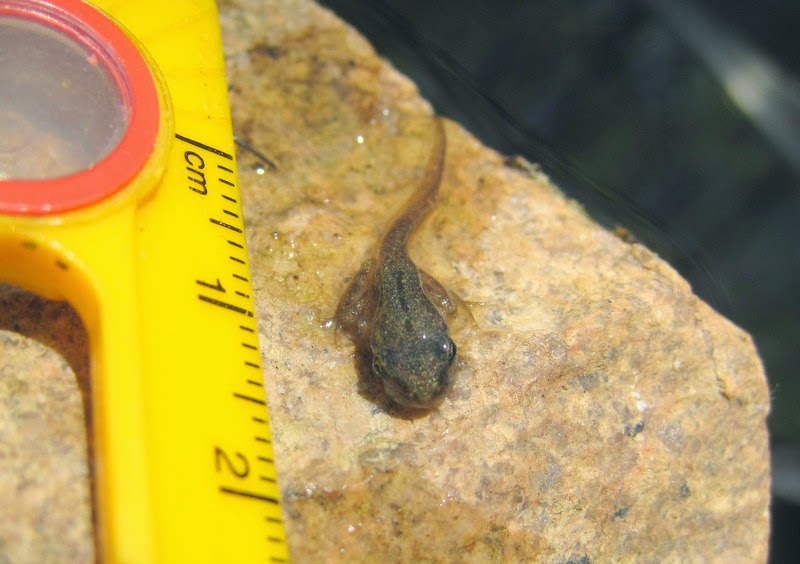 Their markings still aren't fully "there," but I still think they're spring peepers. They'll get the distinctive cross-markings eventually. Or maybe they won't and they'll wind up being some other kind of frog. 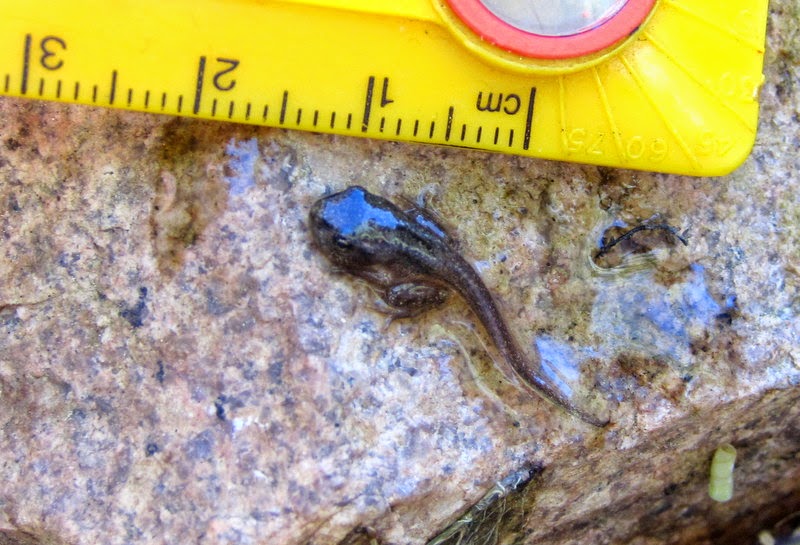 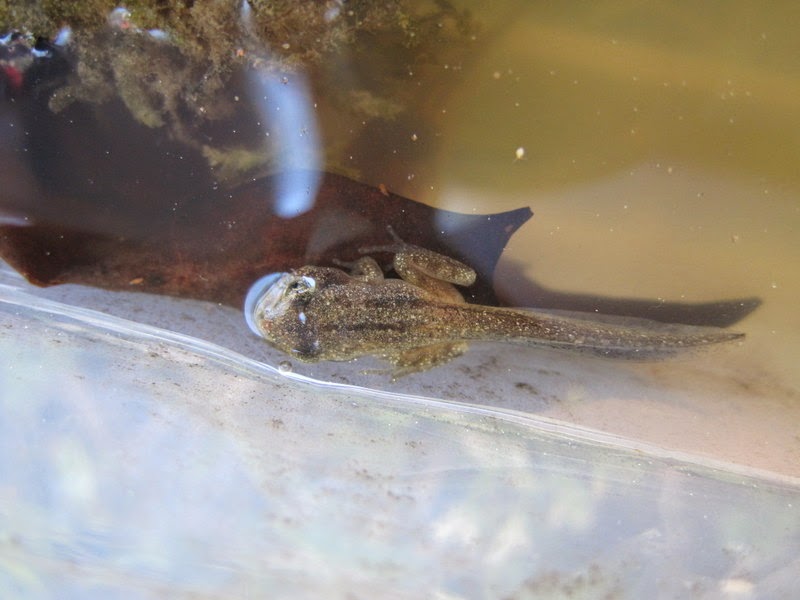 I'm worried about how to feed them yet again. Catching enough bugs sounds daunting. But I suppose they'll just be absorbing their tails for the next little while anyway. A lot of the tadpoles are still eating boiled lettuce and Rachel noticed a bloodworm in our tank, which I read frogs prey on as well. So I think they'll be fine. And we'll be letting them go before too long, anyway.

And now for some parting photos of a frog hopping along my fingers (I tried to get Miriam to hold it but she couldn't do it—she kept pulling her hand away): 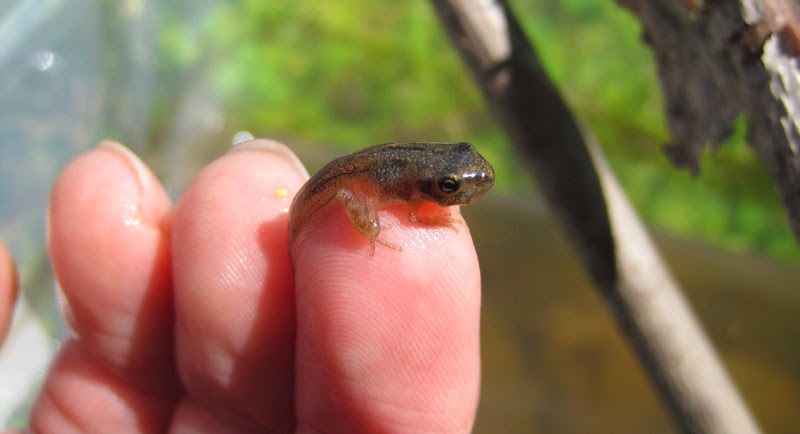 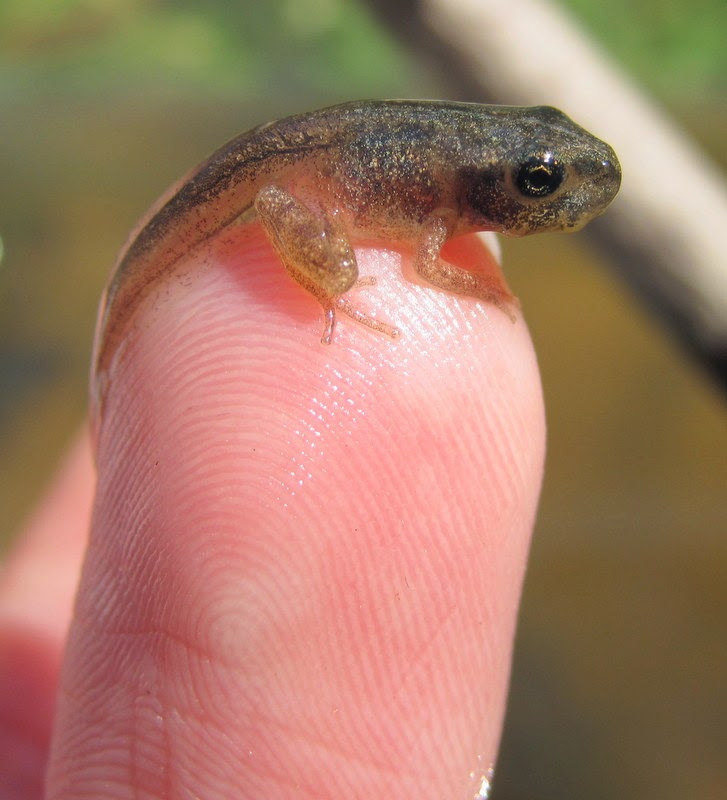 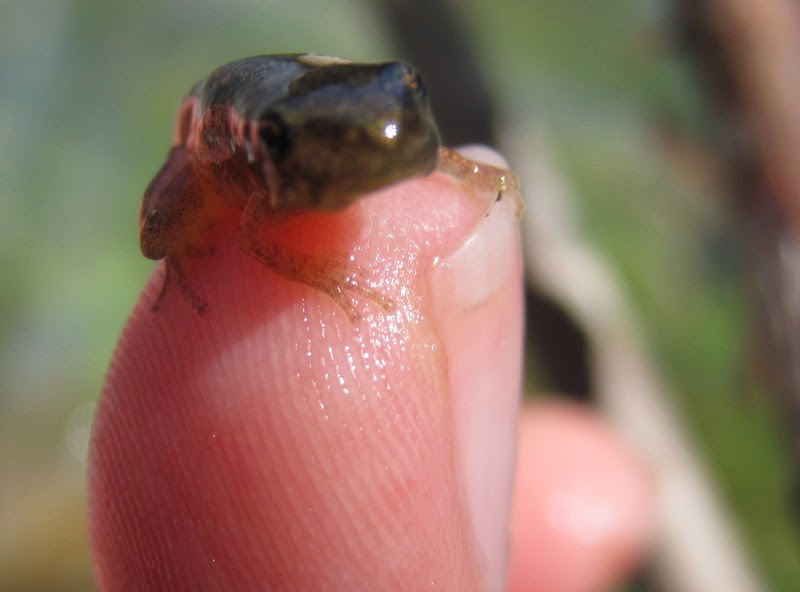 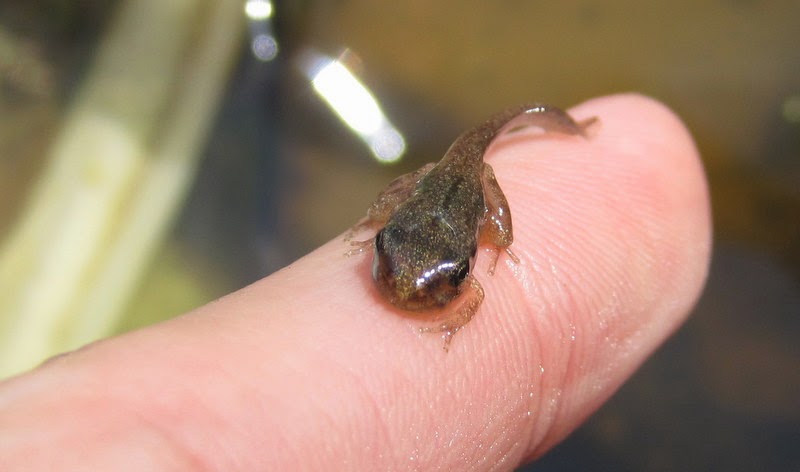 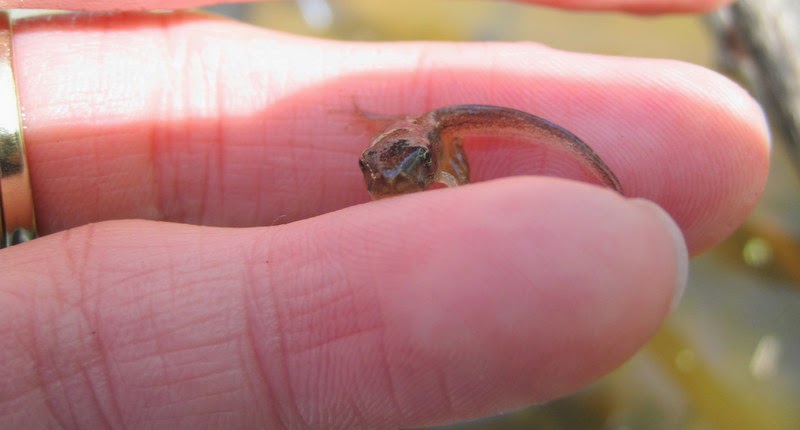