I finally made it to one of Rachel's soccer games. Andrew's been playing the role of soccer dad. It just makes more sense to send him to games/practices where he can passively watch (sorry Rachel, I mean actively watch) while he reads articles, rather than have me take Rachel and the other kids. So usually I stay home and either get Miriam and Benjamin ready for bed (while Rachel and Dad are at soccer practice) or stay home and get Miriam and Benjamin ready for the day (while Rachel and Dad are at a soccer game). Even Grandma made it to a soccer game before I did!

But today's soccer game was in the afternoon and we were in charge of snacks, so today the whole family went to enjoy Rachel's game. Or at least the first quarter of it.

May I just say how much we've enjoyed this soccer season? It's been affordable, enjoyable, educational, and relaxing.

Rachel's coach is simply amazing. He played soccer in school when he was younger but this is his first time coaching—his daughter is on the team. He's cheerful and kind and the girls have already learned a lot. When we were assigned our team, we got an email saying that we were on the "Moore-Mon" team.

"That's weird," Andrew said. "I wonder if all the other Mormon kids in the league are on the same team."

"Why would you think that?" I asked.

"Because it's the Moore-Mon team," he said.

"Oh," Andrew said as it dawned on him. "I thought they were being clever."

Coach Moore has been wonderful. Rachel is the only Mormon on her team. And that's totally fine.

At today's game the green shirts (who our team called "The Highlighters" because the green was just that bright) only had four players show up. Our league plays five against five so we leant one of our girls to their side so we could keep playing five on five, rather than drop down to four players per team. We try to go to every game, but I do like that while it's a commitment it's not a commitment (compared to ballet where if you missed two rehearsals you were kicked out of the show). I like that sports teach children about commitment but sometimes I just want to go to the beach on a Saturday rather than sit around a dance studio or soccer field all day...not that we've gone to the beach yet this year. Perhaps just knowing it's an option makes me feel less antsy about skipping.

Rachel is player #3 on the purple team. I can't remember what they called themselves. The Flying Cheetahs? Something like that. Here she is dribbling the ball down the field: 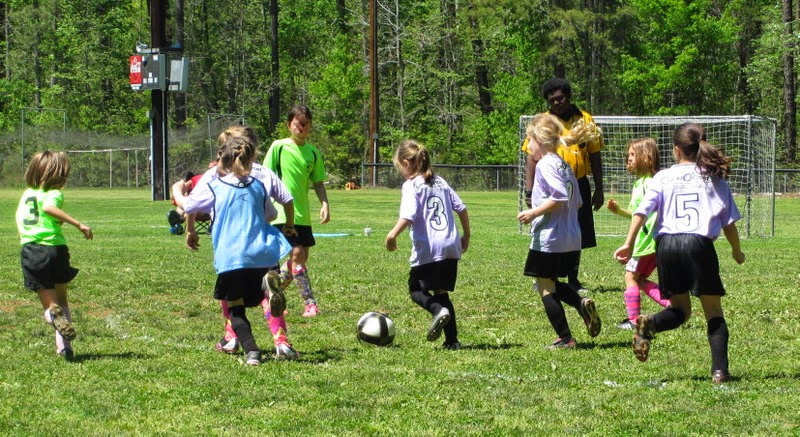 And here she is running back to their side of the field (she's on the far right):

And here she is running back the way she came—she sure gets a workout! 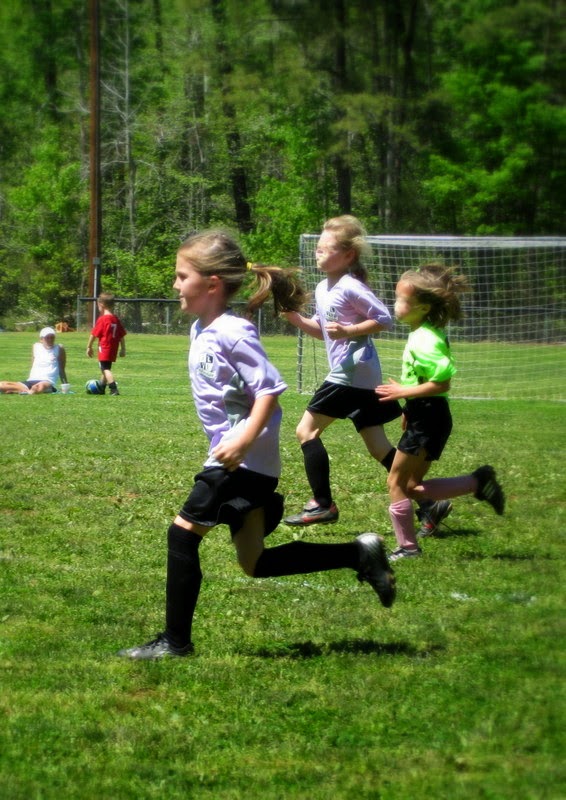 And that's about as long as we lasted on the field. We passed a beautiful playground on the way to the field and Miriam started whining to play at it the minute we sat down. So, I took the kids (and another little girl whose sister is on Rachel's team) and headed to the playground (of Mangum Elementary), which is home to one of the biggest trees I have ever seen. 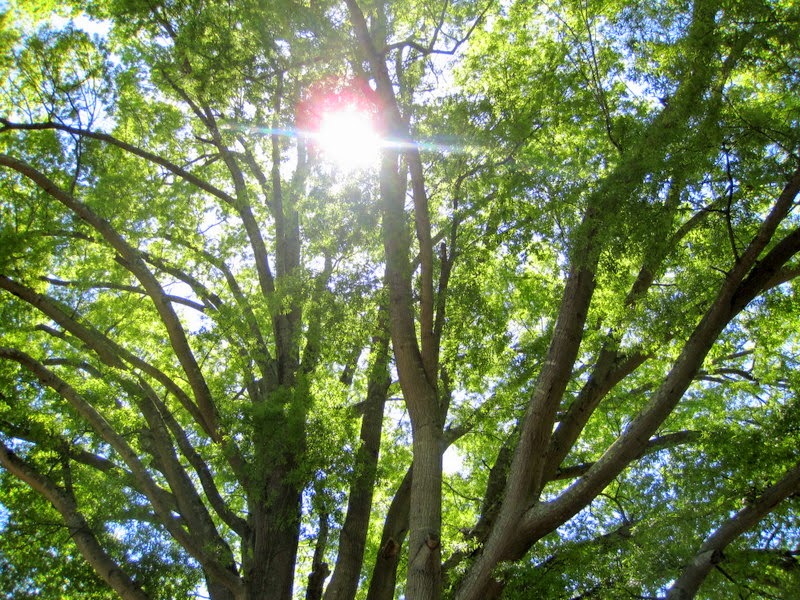 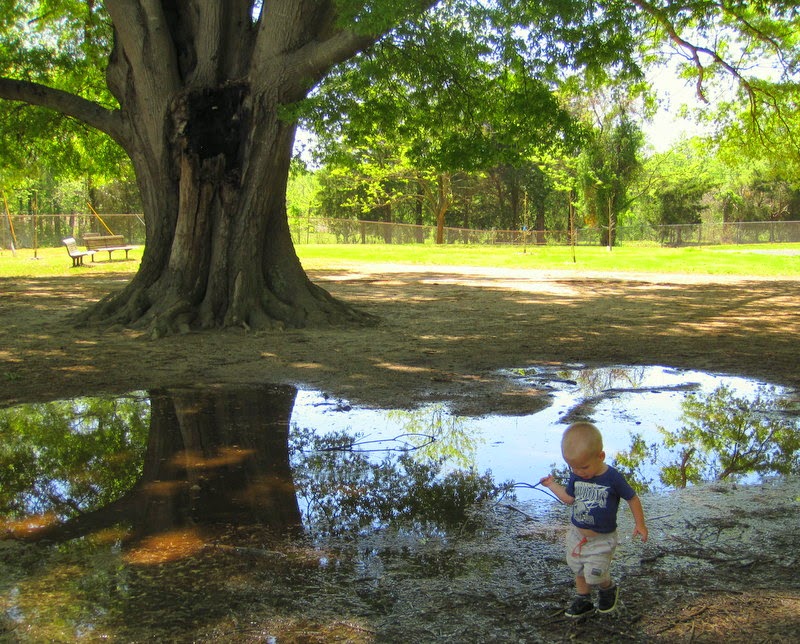 It even had a branch growing from one branch into another, which reminded me of (one of) my home town(s): 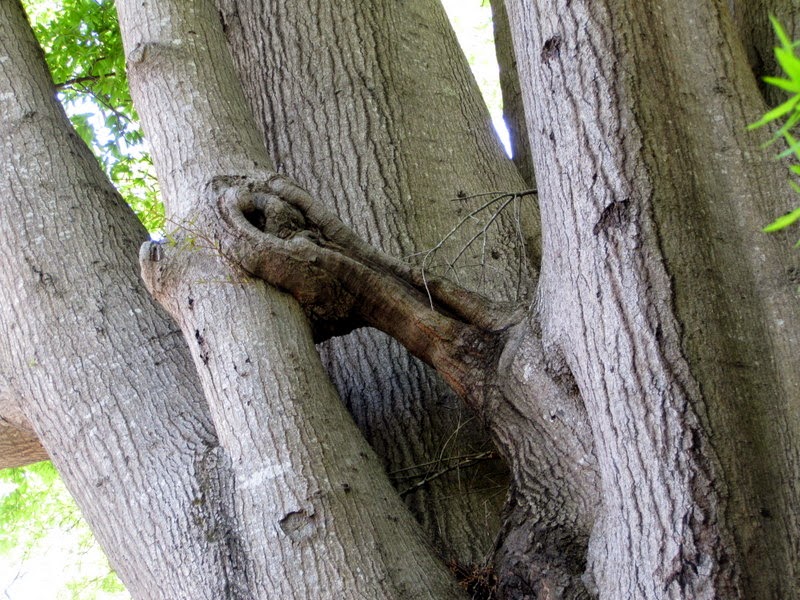 I had an embarrassing moment with the little girl we brought along with us when I realized I didn't even know her name. So I quickly asked her.

So I called her Kekayla several times until she finally looked at me and said, "My name is just Kayla."

It was a bit of a cultural misunderstanding. See, Kayla is black—or brown, as she'd say—and it was totally plausible in my mind for an African American child to be named Kekayla. Had she been a white child I probably would have been able to recognize that she stuttered on the first syllable of her name.

Black names tend to be more unique. It's a thing, okay:

And I come across this problem here in the south quite frequently...only in reverse:

Anyway, we had fun at the park with "just Kayla."

My kids spent a ridiculous amount of time playing in the puddle under the tree. Kayla said her mom wouldn't like her to get dirty. Eventually my kids joined her at the playground. 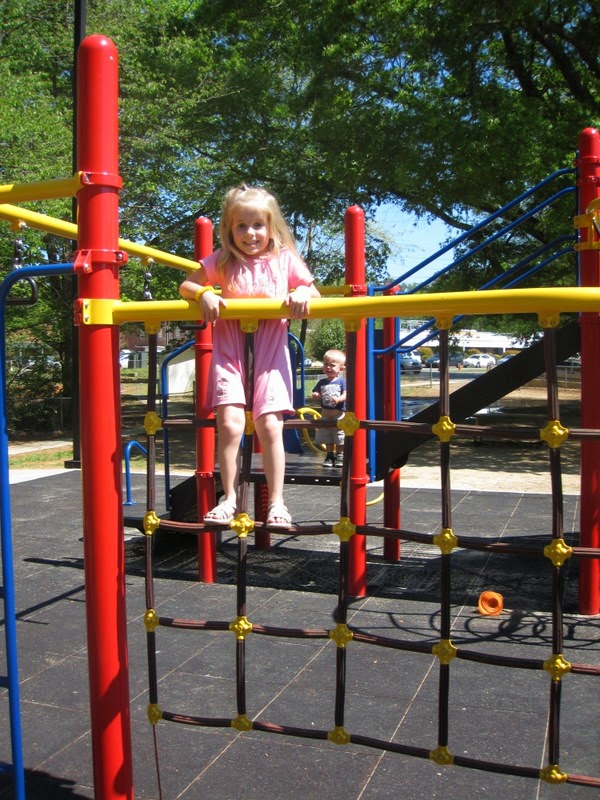 Benjamin was rather upset when Miriam took a turn pushing him. He likes Mom to do things for him (and only Mom). 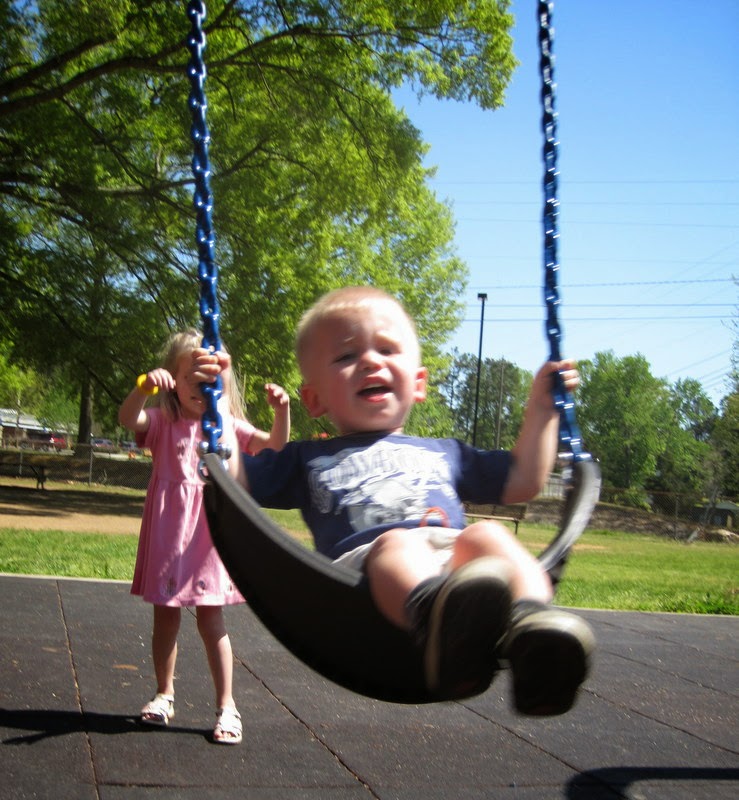 At the kindergarten playground, Miriam attempted the monkey bars. She got this far by herself and then got stuck but was too afraid to let go: 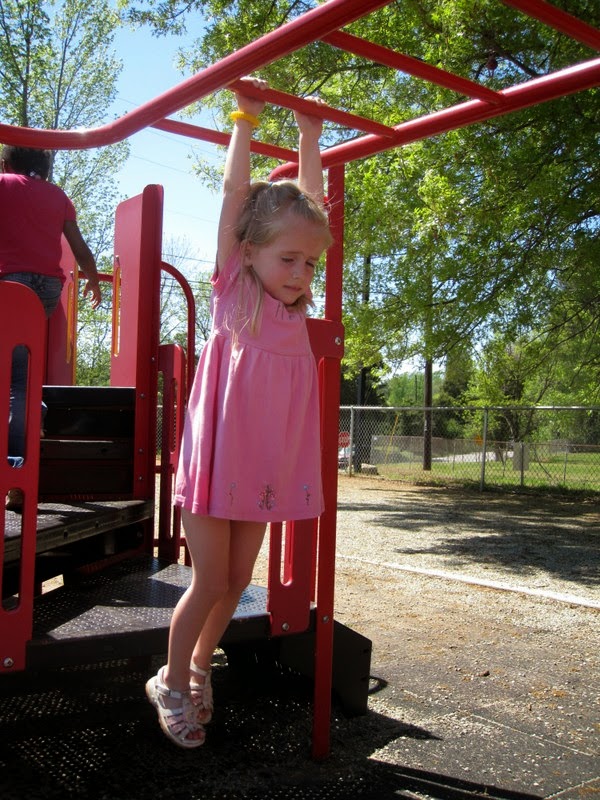 I told her to do a "motorcycle landing," bending her knees as she landed (as if she were straddling a motorcycle) and putting her hands out in front of her (as if she were revving the engine of a motorcycle). She did great—made a perfect landing! And I felt happy knowing I didn't waste all my time as a gymnastics instructor. 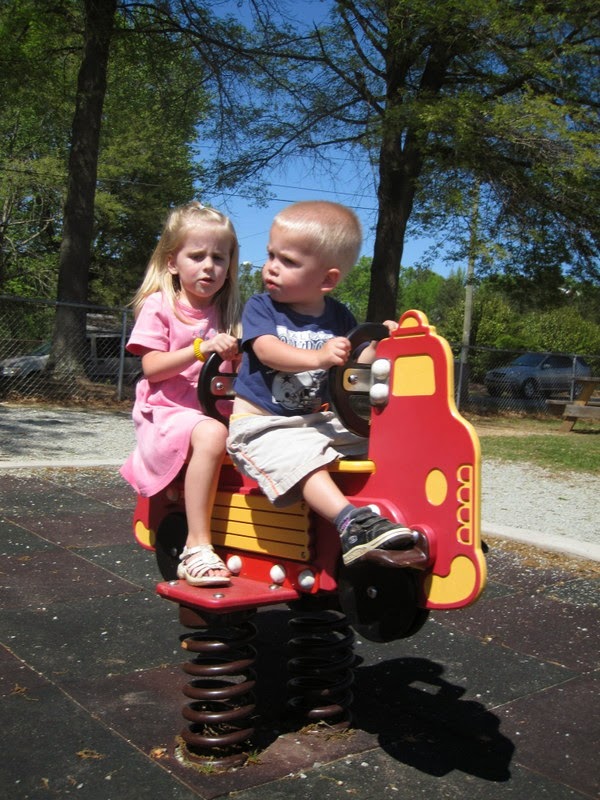 Now that Benjamin's wearing underwear more consistently, he's adopted a skater look. His low-riding pants show off a good inch of underwear and I'm constantly asking him to pull them back up (a skill he hasn't quite mastered). I put him in 9-month pants the other day and they still fell down. 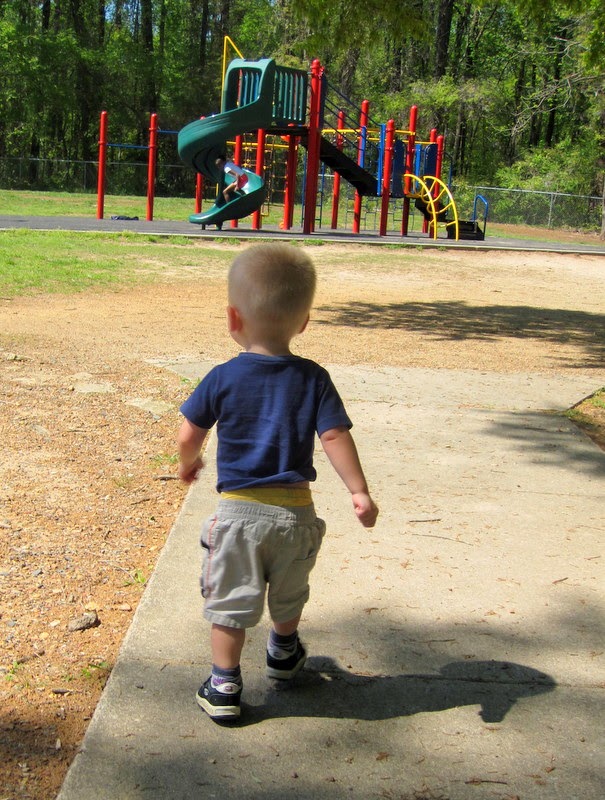 There were no available restrooms at the soccer field so guess what else he mastered today? Peeing in the wilderness. He wouldn't do it standing up—that would have been much easier—so I had to hold him by his thighs in the "basic under thigh hold" to convince him to pee. He found it thrilling.

He peed right on a ladybug. He peed on a flower. He peed on the grass. He laughed himself to pieces, then later, when he again felt the call of nature, as it were, he signed potty to me and said, "I want to go pee on a tree!"

That's an eight-word sentence! Of course, he smooshes some of those words together so it came out more like, "Ah-onna go pee onna tree!"

So, I took him to go pee on a tree. And he loved it. (I might have a slight problem on my hands now.)

He didn't have a single accident all day. Yesterday he wet himself at Rachel's school and again later when we were at Laura's house for ukulele (though he also told me he had to go and went at her house as well). Some days are still better than others but I'm really hoping we can conclude the Benjamin-in-diapers stage in the next little while.

I actually had a bird's-eye view of the soccer field from the playground (so I still watched (some of) your game, Rachel) and when they were lining up to high-five the other team we headed back down to the field to score some snacks. 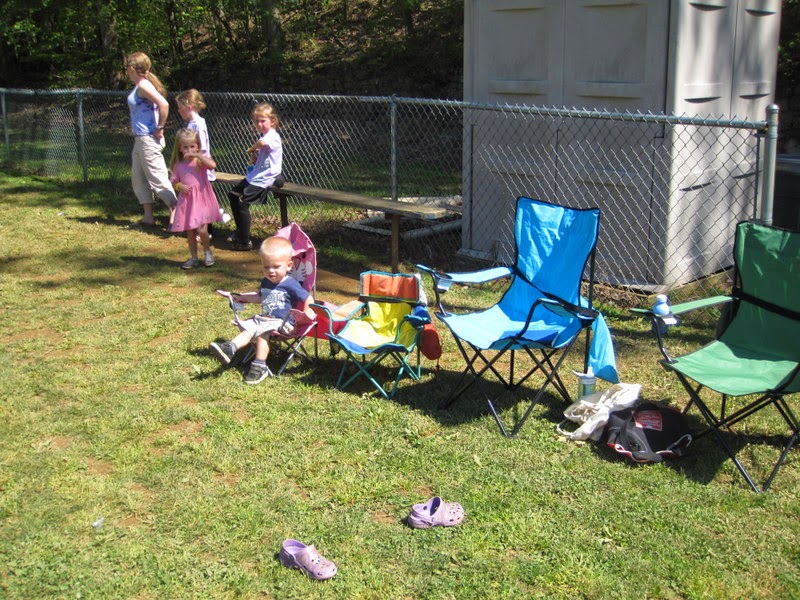 Benjamin climbed up this bench and started walking along it. He was doing just fine but he was making Rachel nervous so she went to help him, which made him nervous. He did just fine and then jumped into my arms at the end. 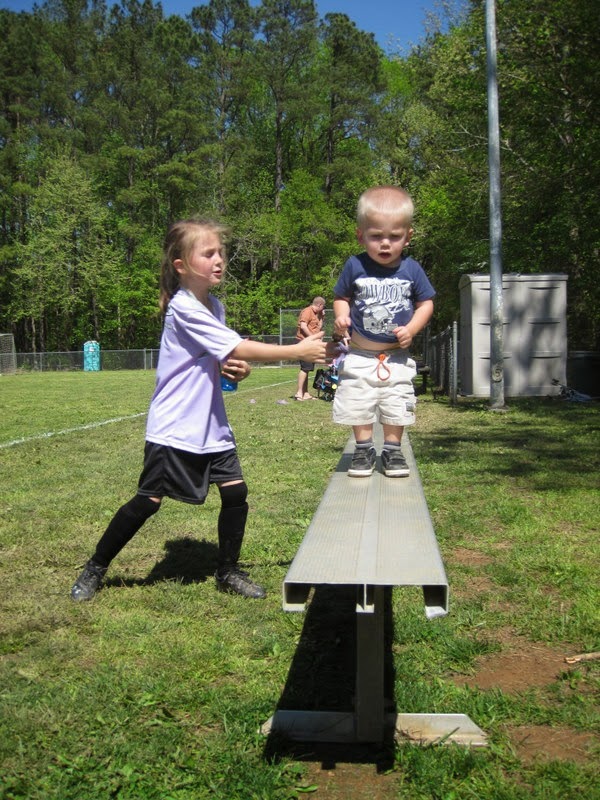 I helped Rachel out of her cleats because the laces were double knotted and she couldn't get them undone. Then I went the extra mile and pulled off her socks and shin guards for her as well. It was disgusting—they were so sweaty!

The score of the game was 4:1 and Rachel's team was so excited that they finally won a match! Of course, technically speaking "they don't keep score" but everyone always knows what the score is and the losing team always feels a little bit of healthy dejection while the winners do their best to suppress the jubilance they're feeling. It's a "developmental league." And I think it's great.