Andrew's dad has been scanning pictures and we sat down last Sunday to look at the pictures he put up on a Picasa web album...I just need to get access to that album. But here's one I pulled from Facebook. 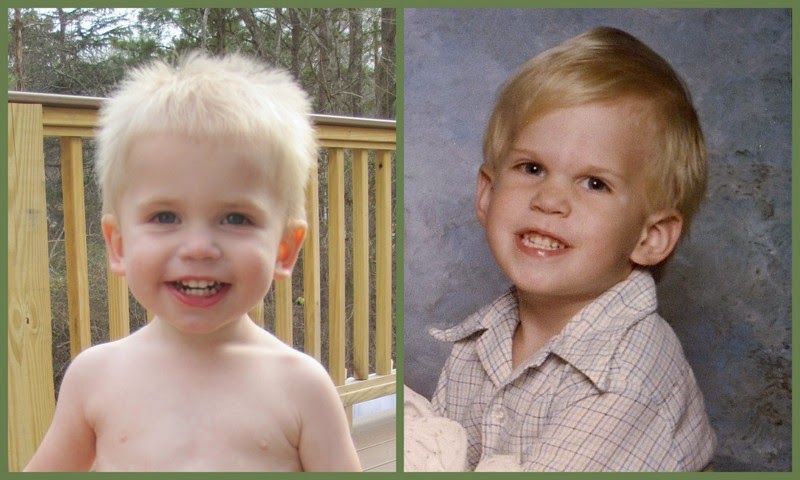 On the left is Benjamin (February 2014—about 20 months old) and on the right is Andrew (sometime in 1987 (I guess late summer/early autumn because Katharine is sitting up fairly well, though I cropped her out)—around three years old). Obviously it's not a great comparison since they're still a year apart, but the similarities are easier to see than when they're 27 years apart.

Benjamin's hair is a little more unruly, the little fuzz-head, but perhaps we'll be able to tame it by the time he's three, and Andrew's parents are obviously better at keeping clothes on their children (though, again, by the time Benjamin's three we'll hopefully be able to convince him of the merits of clothing as well—and honestly this is an eating-naked-on-the-back-deck picture juxtaposed with a seating-at-a professional-photographer photo. I'd probably put clothes on my kids for a professional photographer, too. Oh, and Benjamin's not really naked. He's wearing a diaper).

You can clearly see they've got the same nose, the same eyes, the same goofy grin, the same little cheeks. Benjamin is certainly Andrew's mini-me. And aren't they just adorable?
Posted by Nancy at 4:40 PM