Benjamin has finally agreed to settle down for the night (he's not sleeping yet but at least he's settled) so I will try to breeze through Saturday afternoon as fast as I can because I feel like I'm just falling further and further behind here.

When we were at the Hill Cumorah visitor's center Andrew picked up a pamphlet about things to do locally. Palmyra has five museums and you can visit them all for the low, low price of $7 per person (16 and older) or $14 per family (making it the same price for our family either way). We decided we'd give them a try and they weren't terrible, as far as museums go, but they were also terribly understaffed and many of the displays could be summed up as "lots of old stuff in an old room in an old house."

But we also go to do a few things you don't ordinarily get to do at a museum—like try on old firefighter helmets. 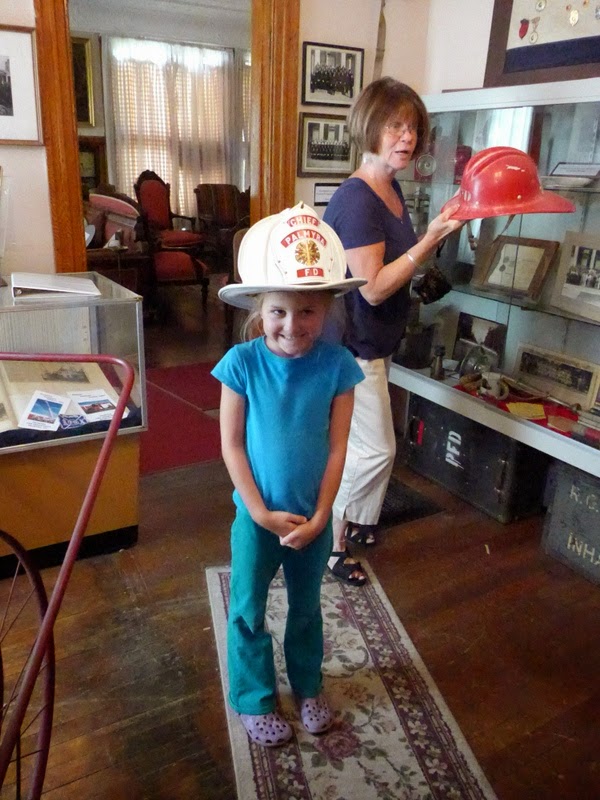 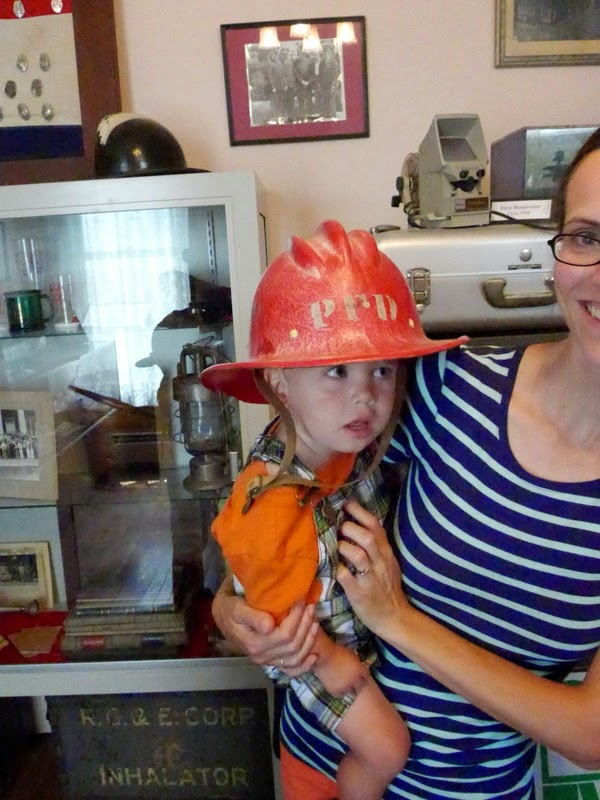 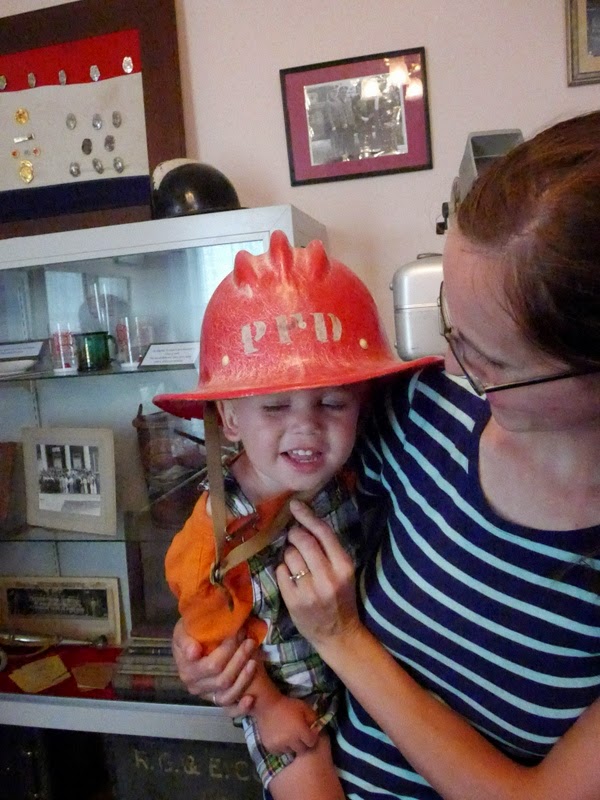 One of the more interesting museums was an old store that closed suddenly in 1940. It had been kept in the family since the time of Joseph Smith (our guide was sure to tell us that the doors were old enough that Joseph Smith could have walked right through them) but then was abandoned—with everything left on the shelves. There's even a case of (now) basically fossilized eggs. 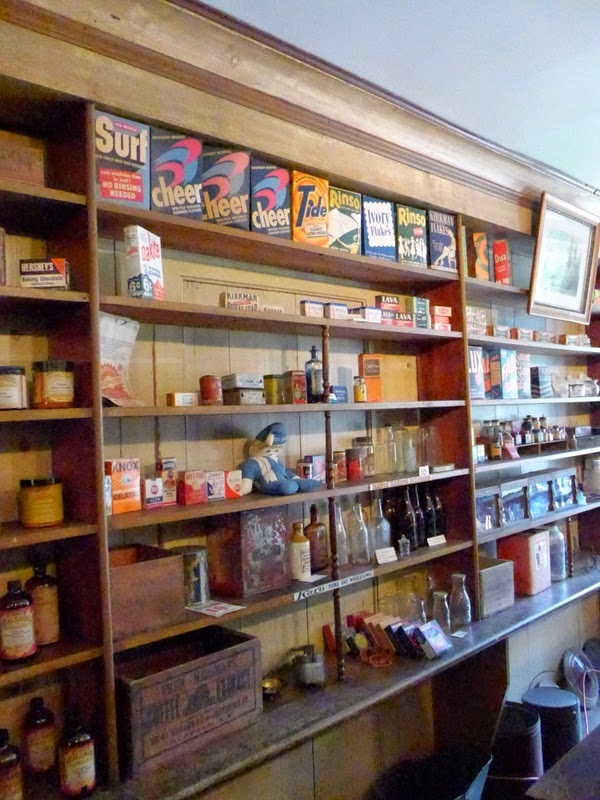 A woman lived in the house (the daughter of the owner?) until she died in the 1970s—without running water and without electricity. She was an old maid who taught piano in Palmyra for years and years. When she died there was talk of the building being torn down but instead the historical society acquired it (for $1) and has spent the past forty years or so restoring it.

The kids were certainly happy to get back to camp, though. There's been more "sit still!" and "don't touch!" than I expected on this trip so the kids were happy to be set free while we made dinner.

We're at a campsite that doesn't allow fires so Andrew said this would be "clean camping." Well, our campsite (which is actually the county fairgrounds—but at $20 to $25 per night we didn't care where it was) might not have fire pits but it does have a racetrack. That racetrack is covered in gravel so fine that I'm fairly sure it could double as kitty litter.

And my kids have loved playing in it. 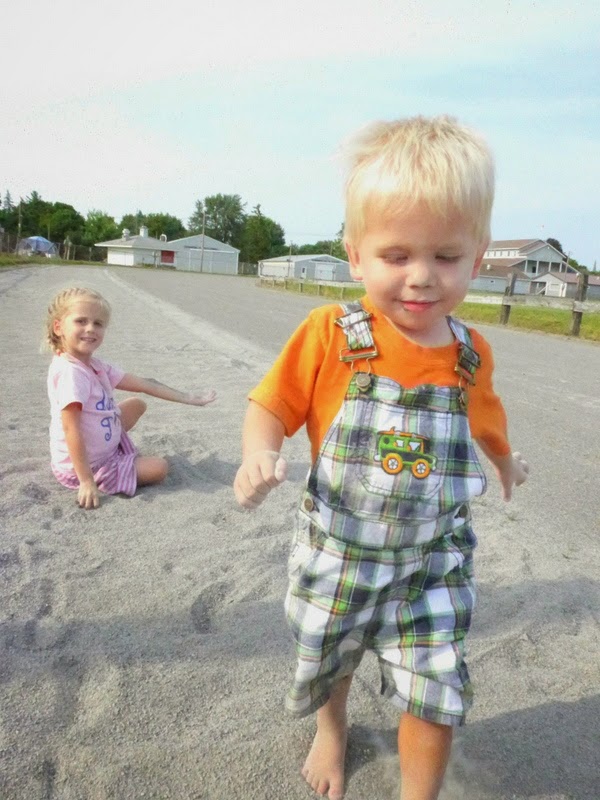 (Pardon my grainy pictures. The ISO was somehow bumped up to 6400 (?!) and I didn't notice until far, far too late. So all of our pictures are terrible and I think my heart is about ready to break into a billion pieces over it.)

They played normally with the sandy stuff the first day we were here—building castles and sifting it through their fingers and other such things. They got dirty, sure, but that dirty was nothing compared to the dirty we experienced on Saturday. 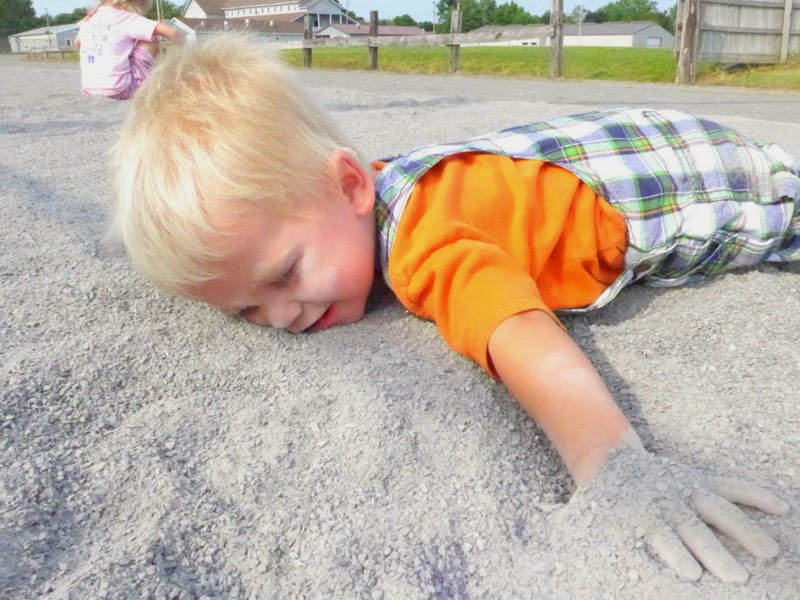 Miriam invented a game called "put dirt in each other's hair." The rules are pretty simple. You can probably figure them out.

When we called them for dinner two grey-coloured ghosts drifted into our campsite. These two were covered in dust from their head to their toes: 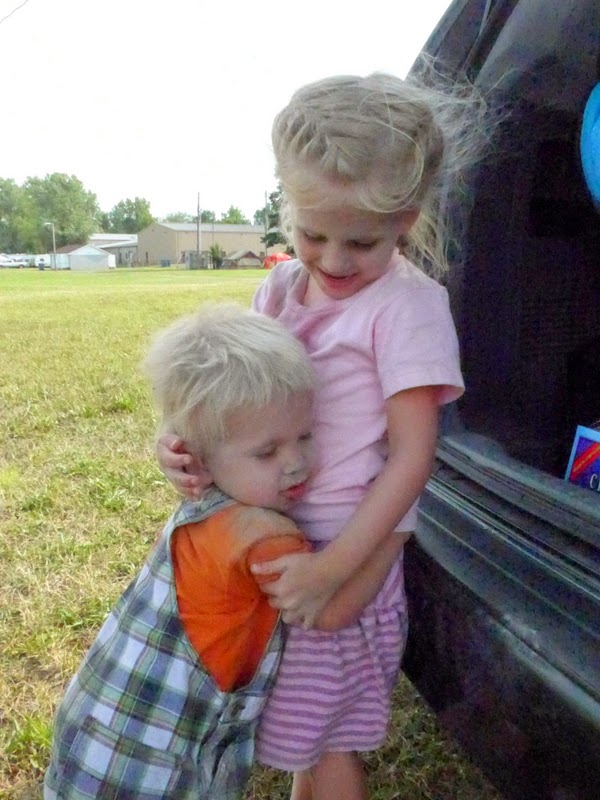 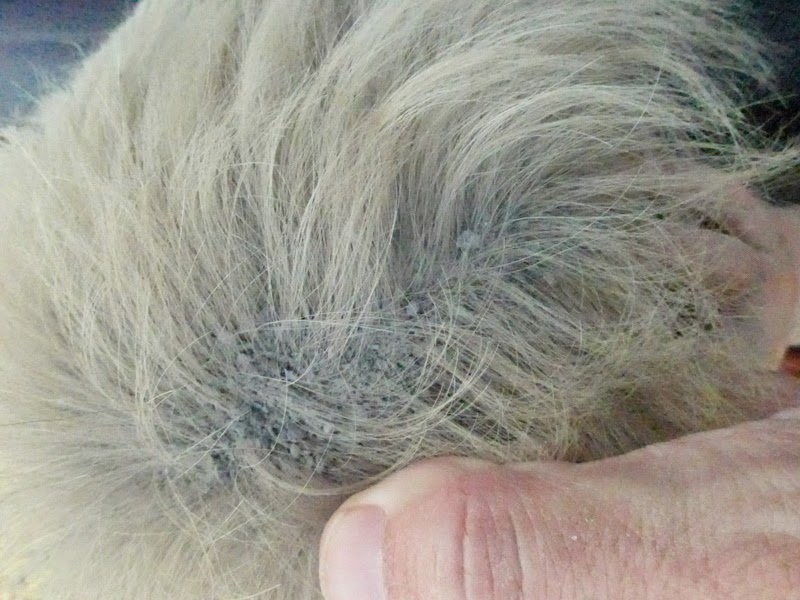 We shook him upside down before dinner (seriously) to get the bulk of it out. Miriam's hair was just as encrusted but was ten times more difficult to clean.

We showered the kids before taking them to the pageant and I rebraided Miriam's hair, but it was still so disgusting. I could feel the grit in it as I worked with it.