This morning Rachel woke up with her alarm and got herself ready for school so that she could sit and read for a while (she's already finished The Witches and is now halfway through The BFG—and she only got them yesterday).

We took her first-day-of-school pictures inside because it was raining cats and dogs. 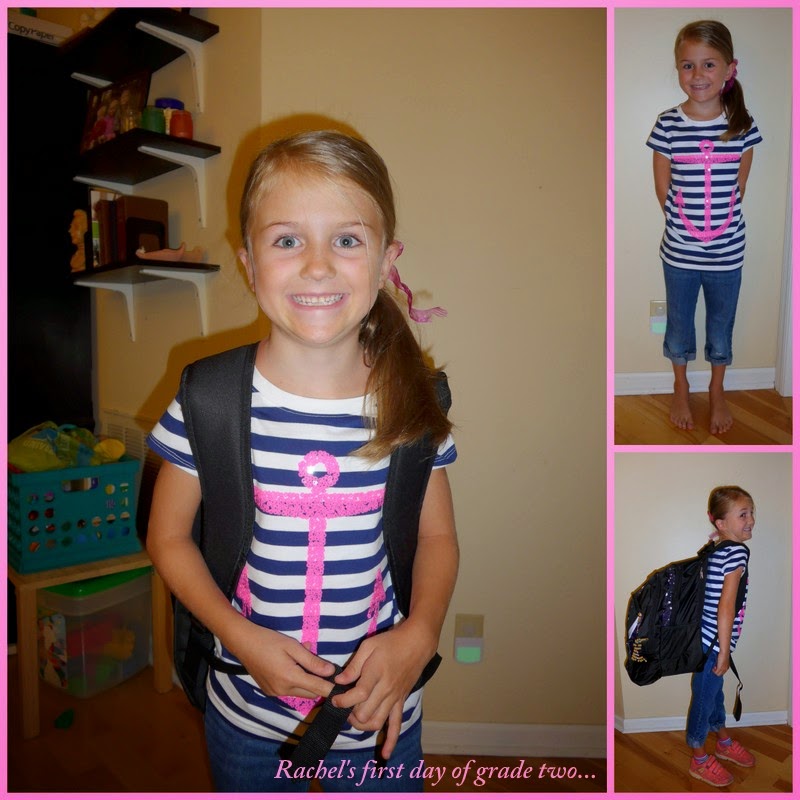 Rachel is, in fact, a rather picky child to shop for.

My mom is laughing about that right now because I'm also a picky shopper. I actually detest shopping. It makes me cry. Nothing ever fits nicely. Ever. Nothing is ever in the right colour or style; nothing's ever modest enough or comfortable enough. Nothing ever fits in my budget. Shopping is agony.

Rachel is much like me in that regard. We had the hardest time finding clothes that were neither too girly nor too boyish. Pink t-shirt? Too girly. Black t-shirt with sparkly Superman insignia? Too boyish.

Perhaps we would have had better luck if I had let Rachel look at any other rack besides the 50% off rack, but honestly, keeping kids in clothes is expensive! We've managed to live mostly on hand-me-downs for the past seven years but we're getting old. All of our friends who used to hand things down to Rachel have moved away and all the new people moving into our ward have children younger than ours.

Imagine that! Married couples with children younger than ours. Like I said, we're getting old.

Trading tables has likewise been less than fruitful in hand-me-downs suited for Rachel and from my experience shopping at the super discount racks in a store is just as expensive as shopping at a thrift store (though I haven't tried any thrift stores here—perhaps I should check some out).

Anyway, we did manage to find a few shirts that Rachel liked, and we found a few pairs of pants (that she'll need to grow into a bit—and hopefully she will). Shoes, however, were a no-go.

Her backpack is ginormous because all the kid-sized ones were either far too girly or far too boyish. She's outgrown Hello Kitty (kindergarten) and Disney Fairies (grade one) and simply couldn't bring herself to choose a Monster High bag (bless her). Everything was puking princess paraphernalia or flowers, butterflies, and rainbows. Or it was race cars and Mario and super heroes.

We had to buy an adult-sized backpack because those were the only normal ones. Hopefully she'll be content to use it for a couple of years, considering it's nondescript enough to please her ever-changing likes.

It's stuffed to the brim with school supplies. I have a bit of a soap box about this because of how many parents I hear complaining about having to shop for school supplies—especially things that go into the "communal pot." Here's Rachel's list, which I think was perfectly reasonable:

And $4 for a student planner.

When I look at that supply list I, first of all, get really excited. Back-to-school shopping was always exciting when I was little. I loved picking out boxes of brand-new Laurentien pencil crayons (How sad am I that they don't make them anymore? So sad.) and carefully scrawling my name on each one. I loved having a fresh notebook, a clean Le Kit box, a pristine eraser. All these things symbolize a fresh start, another year to fill my mind with information.

Andrew was much the same way as a child. We're both nerds. And we apparently breed nerds because Rachel gets excited about the start of the school year as well. She could hardly wait to go get her school supplies (school clothes were not on her mind at all—just give her those new crayons).

When I look at that supply list I also think it's super good deal. A woman (because Rachel's teacher is a woman this year) is going to teach my daughter and eighteen other kids (because Rachel's class only has 19 kids in it  (last year she had 28 classmates so 19 is looking pretty good)) for a full nine months and all I have to contribute is that?!

Perhaps my point of view comes from having to do back-to-school shopping for Andrew for the past decade—the kind of back-to-school shopping that really actually breaks the bank. I'm sorry mothers of elementary students but, uh, that package of glue sticks isn't going to break the bank. Do you know what is? A $200 textbook. That you will use for one class for one semester, that isn't even the only book you need for that class, that you either won't be able to sell back (or will be able to sell back for twenty measly dollars). That's what breaks the bank.

You'd better believe I went on Amazon.com and bought a box of glue sticks in bulk. Granted, I didn't send them all in with Rachel because I know Miriam's preschool's wish list will be coming home soon as well, but I did send in a healthy amount of glue.

I think it's pretty important to support the teacher that is actively educating my child. I'm just saying.

Benjamin woke up before Rachel left for school (Andrew drove her this morning and took the van—and a good thing, too, because there was some flooding downtown which he wouldn't have been able to traverse on his scooter) and he was devastated when she walked out the door. He spent about an hour wandering around the house calling her name and collapsing piteously onto various pieces of furniture.

He did eventually get over her (probably around the time Miriam woke up—he's always happy to see Miriam in the morning) and began playing with his toy farm. The only problem was that he couldn't find the trailer for his toy tractor.

He brought me his tractor and pointed to the hook for the trailer.

"Truck butt!" he explained. "Where butt?" 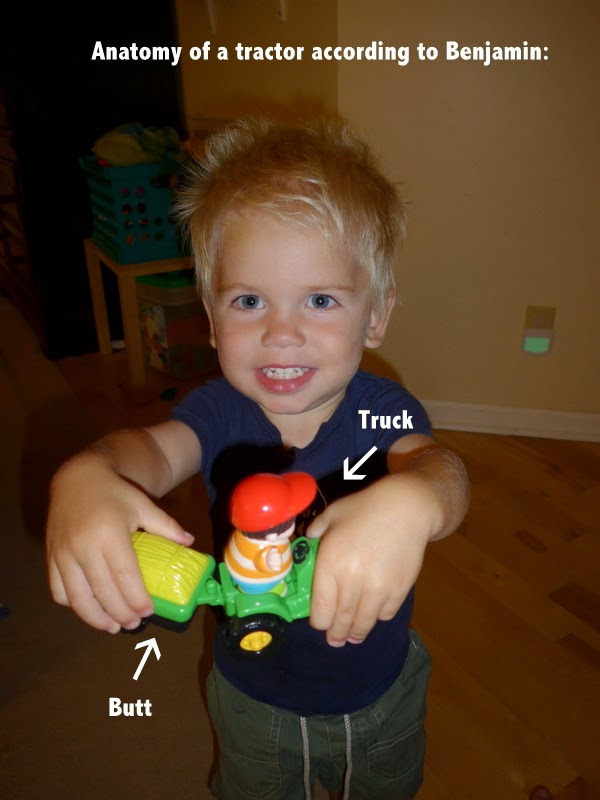 His poor bedroom has been a disaster area. He has a shelf full of containers of toys and a shelf full of books in there. To explain how messy it was I will just tell you that the shelves were both empty and the floor was very full.

After some tidying up we managed to find his truck butt and he was very happy.

We had a fairly good day overall. The girls across the street came over to play in the backyard and I had a lovely chat with their mom. Benjamin took a decent nap and woke up missing his sister again. His mood quickly turned around when I told him she'd be coming home on the bus.

We stood for a long time chatting with the other parents/siblings waiting for the bus.

Diego has is repeating first grade (since he missed more than half the year due to cancer) and has Mr. A. (Rachel's teacher last year). He's super excited about that.

Rachel has C.'s teacher from last year and his dad told me all good things about her. He said they had an awesome year and they just love Ms. M. So that was nice to hear because I really don't know anything about her!

Rachel gushed about her day. She was especially excited about how they can "check four books out from the class library to keep at [their] desks!" That's in addition to school library privileges.

For dinner I made homemade tomato soup—it was fitting for such a dreary day as this (even if it was still indecently warm outside) and our tomatoes had to be used so it was the perfect match.

For FHE we talked about gratitude, which is what our lessons were on in primary this past Sunday. I told Andrew that now that I'm teaching primary every week I'll always be prepared for family night! After talking about blessing from Heavenly Father and kindnesses shown to us by other people, we discussed how we show gratitude—both to Heavenly Father and to others (words and actions).

We read D&C 59:7, "Thou shalt thank the Lord thy God in all things," as well as Matthew 25:30 (because when we are grateful to people and kind to people that's being kind to Heavenly Father in turn).

Then we each chose someone special to write a thank you card to.

The girls had so much fun with that part. They both wrote beautiful notes.

"How did it feel to write those notes?" I asked.

"Because, remember—what happens to your cup when you're grateful?" I asked, in reference to the attention activity I know the girls both participated in yesterday during primary.

And that concluded a rather successful family night, though no family night would be complete without tears and—don't worry—we had plenty of those. Benjamin refused to get ready for opening prayer and instead stood on a stool (that was left in the living room for whatever reason) and yelled at Rachel, who was praying, for putting her feet on it in the middle of the prayer.

When he wouldn't stop screaming at her (because she wasn't getting my hints to stop putting her feet up (hints like physically removing her feet from the stool)) I got up and carted him off to his room and shut the door and let him scream.

Rachel continued to pray, kind of, but mostly was focused on Benjamin's stool.

I gave that stool one swift kick and sent it rolling across the floor.

She quickly finished the prayer. I got up to let Benjamin out of his bedroom and sat him on the couch with his sisters. I stared at them sternly.

"We're having double lesson today," I said. "Because apparently we forgot how to behave during prayers."

"But it's not lesson time. It's family business time," Miriam, the conductor, snootily announced.

"You haven't been exactly reverent yourself—your behavior during the opening song was entirely inappropriate and we're going to talk about that, too!" I lectured.

Sometimes Jesus Wants Me for a Sunbeam gets a little out of hand, and by "a little" I mean she nearly decapitated Benjamin. So...yeah.

"How do we act during prayers?" I asked. "How do we get ready to pray? What are the rules? Please tell me."

In response Benjamin and Miriam got very reverent. They folded their arms and meekly bowed their heads. Only Rachel dared speak up.

"We fold our arms and bow our heads and close our eyes," she chanted in the cadence of the rhyme so familiar to her (while prayers are said is the last bit of the rhyme, in case you were wondering). "But," she tacked on, "You don't have to close your eyes if you're the one saying the prayer."

She said this so seriously that we could tell she really meant it and that only served to make it more hilarious. Andrew and I looked at each other and lost it, leaving all three kids staring at us quizzically while we laughed our heads off.

"That's not a rule," Andrew wheezed. "That's not even close to a rule! There's no exception for the person praying. Everyone closes their eyes."

We talked about why we get ready for prayers—why we bow our heads and close our eyes and fold our arms...and keep our feet quiet. So that we can focus on the prayer rather than on footstools.
Posted by Nancy at 10:42 PM