We went on an actual outing

Rachel was complaining about how tangled her hair keeps getting (because she goes swimming for hours everyday and never brushes her hair but she "thought that pool water was a detangler so it didn't matter if [she] didn't brush [her] hair") so I braided the front part and threw the rest into a bun.

She was so mad at me for giving her "fancy hair."

I was like, "Dude. I assure you that by the end of the day your hair will not have a single tangle in it, so what I actually gave you was tangle-free hair."

Miriam was like, "Do whatever you did to Rachel's hair to my hair but make it even fancier!"

This was how Miriam's hair ended up: 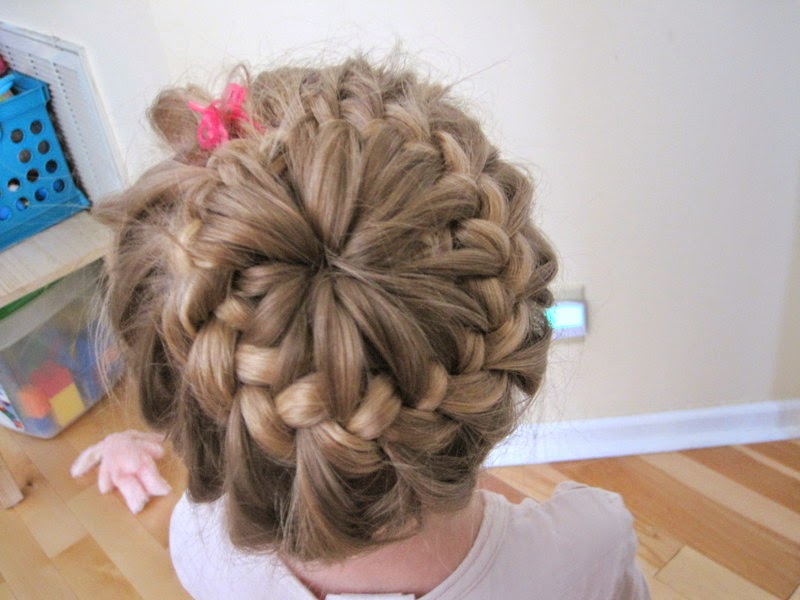 There are no pictures of Rachel's hairdo because she was busy throwing a temper tantrum about it.

By the time I'd finished coiffing my little ladies' luscious locks it was time for lunch so we broke out the leftovers and ate as fast as we could. Andrew was getting anxious to meet us—we'd promised to bring his wallet with us when we went out for the day since he'd forgotten it at home and didn't want to drive all the way back home to get it if we were going out anyway.

He didn't need his license for driving because he was on the scooter (and you don't need a license to drive a scooter in North Carolina) but he also had an appointment with the orthodontist this afternoon and figured he'd probably need his wallet by then.

So we ate lunch as fast as we could and then started getting ready to go. I was in the middle of doing something—packing the diaper bag? fetching the stroller? finding someone's lost shoe?—when Miriam called out, "Mom! Benjamin pooped his pants!"

Because of course he did.

I freely showed my annoyance as I marched him to the bathroom, chastising him the whole way.

"Yes. That's what you say but you have to say it before you do it. It doesn't matter how many times you say it after the fact."

"Step out of your underwear," I instructed. I crouched down to help him out of his underwear while he held onto my shoulders for balance. "Slowly, slowly. Careful steps," I said.

Benjamin kicked his second foot free and sent poop and underwear flying across the bathroom.

That was the straw that broke this camel's back. I lost it a little bit. I yelled and sent Benjamin to the corner (after his bum was clean) where he was harshly instructed to keep his nose until I cleaned up every last bit of his mess. He cried loud (fake) tears the entire time.

Someone peeked in on the whole catastrophe and I rudely told them to "get out of here!"

Rachel went and cried in her bed.

Miriam got out her colouring stuff.

I felt terrible. But, I mean, in a way it's a compliment because apparently I haven't yelled in so long that doing so broke my little babies' hearts.

"Rachel doesn't even want to go to the museum anymore," Miriam mumbled to me when I reemerged from the bathroom.

"What do you mean she doesn't want to go? We're supposed to meet Daddy there with his wallet!"

"I didn't mean that I didn't want to go to the museum," Rachel called from her room. She came out with tear-streaked cheeks. "I just meant that...you don't usually yell like that and it made me so sad!"

So I did the only thing I could. I humbly apologized to all three of them and explained why my actions were wrong. Then I said we needed to forgive each other and move on with our day. So we did.

I wouldn't say that Rachel didn't play with her siblings—because she did—she just took some reading breaks when she simply couldn't push a truck across the sandbox one more time while pretending to enjoy it. And I totally get that. I didn't really attempt to play with my children at all (my back had been broken by a piece of straw, if you recall). I was like, "Have fun playing. I will sit on this bench and occasionally glance up to make sure you haven't been abducted. It would be helpful if you'd continue to squabble loudly so I won't have to glance up as often. Thanks."

See, here's the thing. I was doing my best to change my bad attitude (what we call a bad-ittude) to a good attitude (what we call a glad-ittude) but it was difficult (as these things sometimes are). We took a potty break soon after we got there. Benjamin was in the middle of a cracker so I let him sit in the stroller so he could finish it while I went to the bathroom. But while I was going to the bathroom he wet his pants.

"Why didn't you say something?!" I asked, exasperated. "There were seven open stalls. Rachel knows how to take you potty. She was standing right beside you. She could have helped you. Why would you just sit there and quietly wet your pants?!"

Anyway...I was frustrated...to say the least. But I kept my temper under control because, to quote my friend Crystal, "you had better bet that the stakes are high when you are surrounded by 30 extra adults to not lose your cool in front of them." The museum was crawling with patrons today. So I managed to not completely flip my lid. Plus, no poop was being flung around the bathroom, so...bonus.

"And there's a baby koala and a mommy koala," she said.

"Is that you?" Rachel cooed.

"And is that Mommy?" Rachel asked.

"No, it can't be," Rachel said. "That Mommy doesn't look grumpy enough to be our mommy."

"Changing diapers on a baby doesn't make me grumpy," I said. "Changing poopy underwear makes me grumpy when my potty-trained child decides to ignore all their potty cues and goes right in their pants for no apparent reason without attempting to get to a toilet or to communicate their needs at all. There's a difference."

That little incident made me slide back into my bad attitude for a while again. I'm not sure Elizabeth Keckly was helping much either. I mean, she's totally gracious and forgiving about the whole slavery thing but I was seething inside for her.

Anyway, we stayed at the museum for about four hours and I would say my attitude was back to a good one a couple hours into our stay at the museum. I even pulled the camera out and took some pictures of my children who were seeming more and more adorable (and less and less like monsters) by the minute.

Perhaps the sweet Indian family helped. The grandmother—dressed in a beautiful sari—gushed over Miriam's hair. She pulled her daughter over so that I could explain how to do it. They took a picture of her hair and told me how beautiful my children were. The grandmother even did a head bobble for me (not because I asked her to or anything but because she just did) and my heart began to thaw a little bit. Childhood memories often have that effect on me. My best friend growing up was of Indian descent (Mauritius, really, but India) and her grandmother lived with her and wore saris all the time and I loved her and so I basically just love every sari-wearing bindi-dotted grandmother I see. I can't even help it.

Anyway, here are my kids with a new Durham Bull installment by the farmyard: 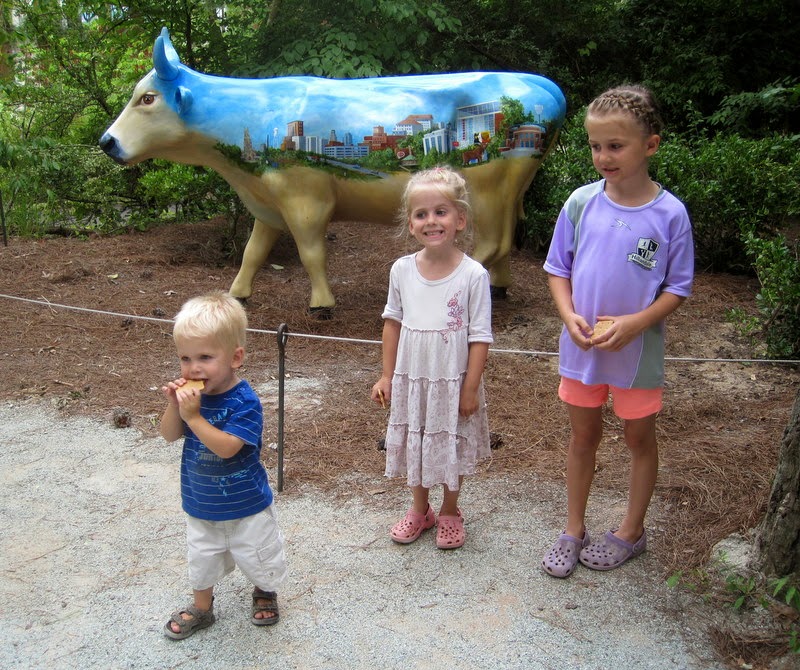 And here is Benjamin asking to please be removed from the dinosaur's back: 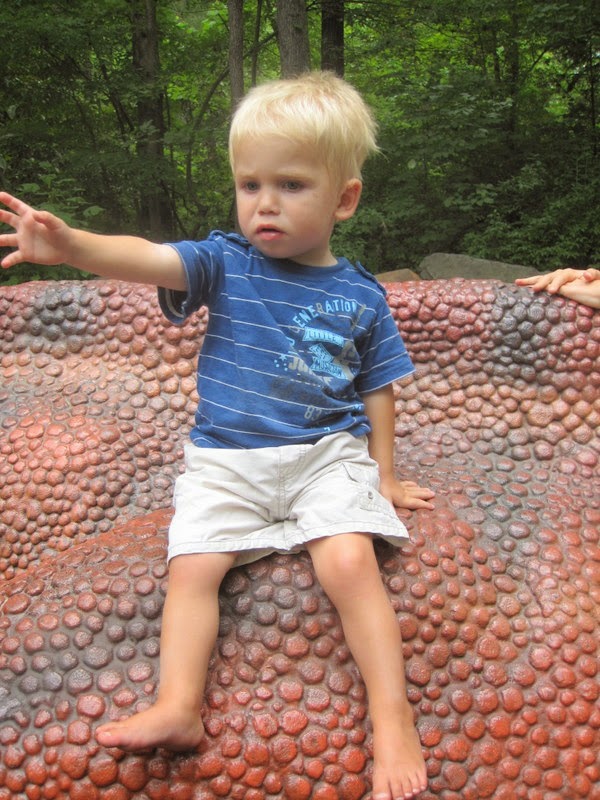 And here is a series of three pictures that proves, once again, that my children are completely incapable of all smiling at the camera at the same time (with an albertosaurs photobombing in the back): 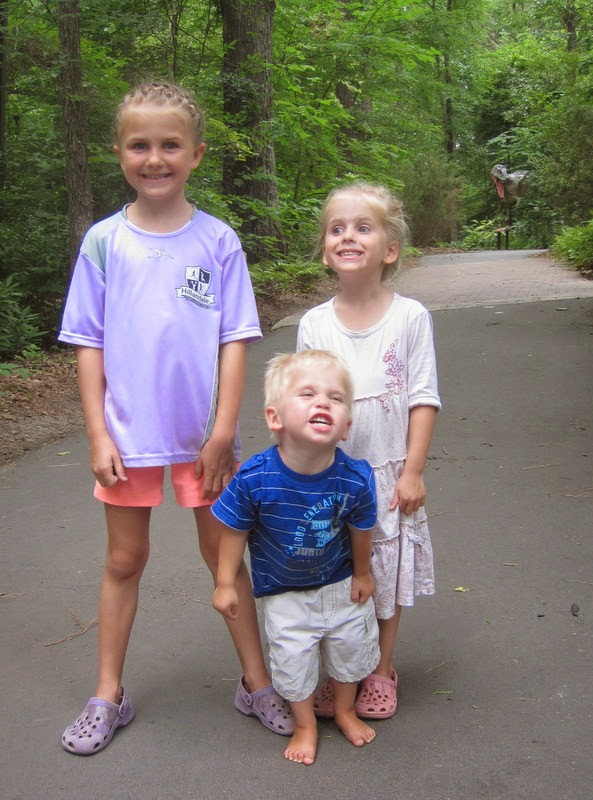 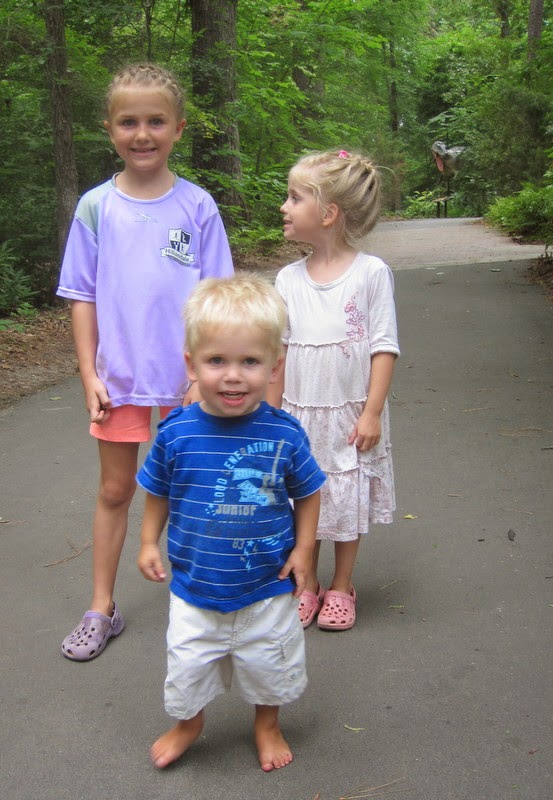 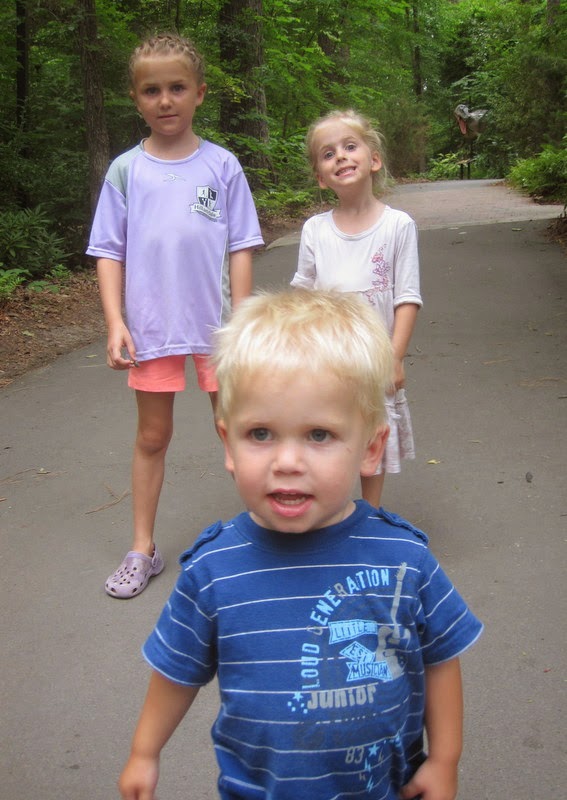 And here are my little ones digging into the gravel pit: 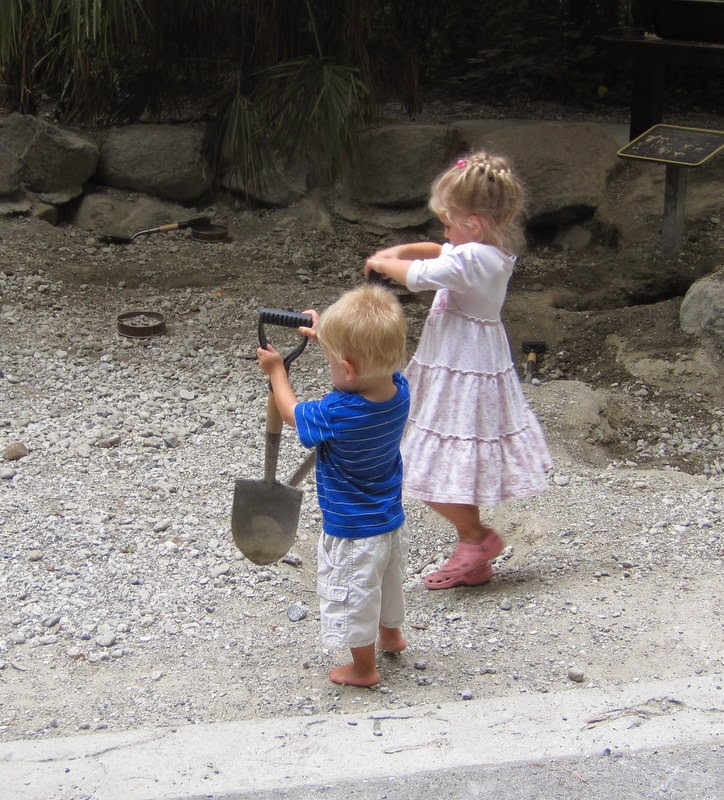 And here is Miriam bringing me an awesomazing rock that she found: 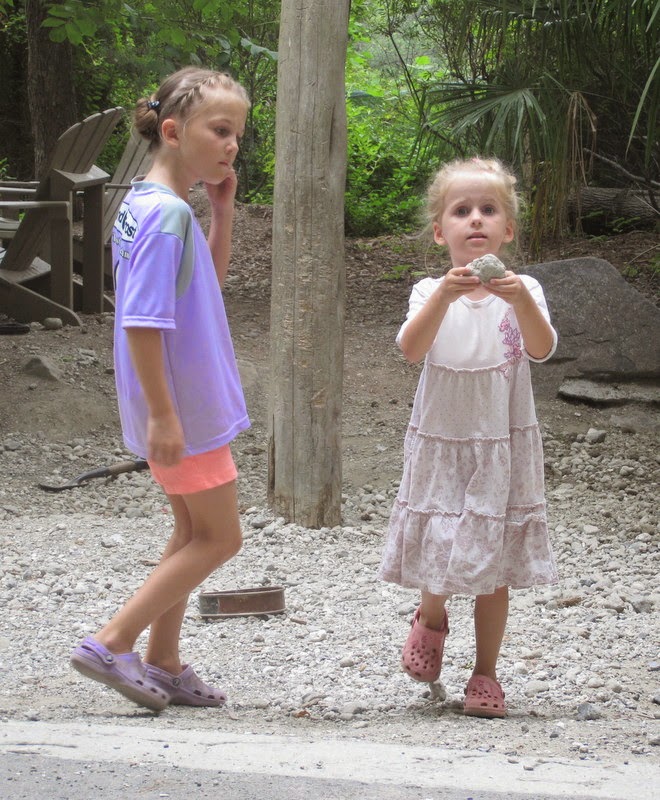 And here she is realizing that it's actually a t-rex head(!!!): 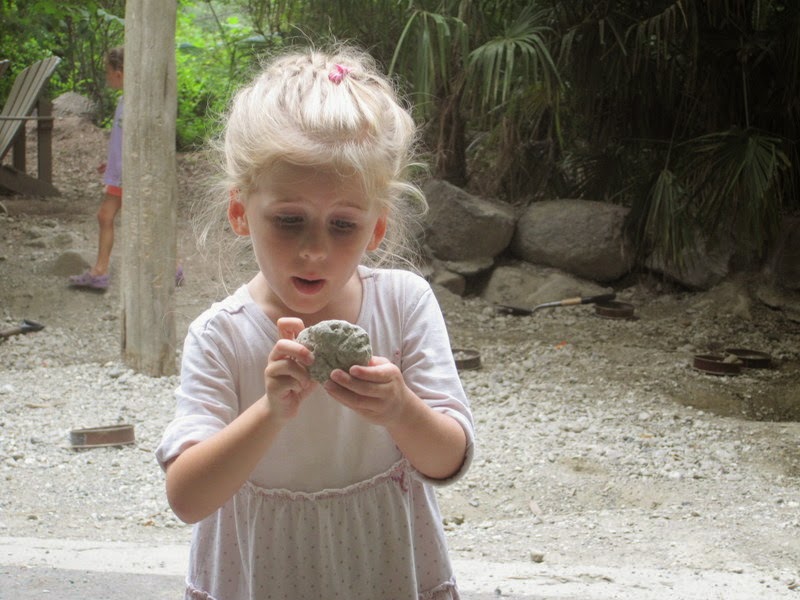 And here is a picture of Rachel running to me screaming because she just fell into a hole that she didn't notice (because (in case you didn't notice) she was aimlessly wandering around the hole-ridden ground in the previous two pictures): 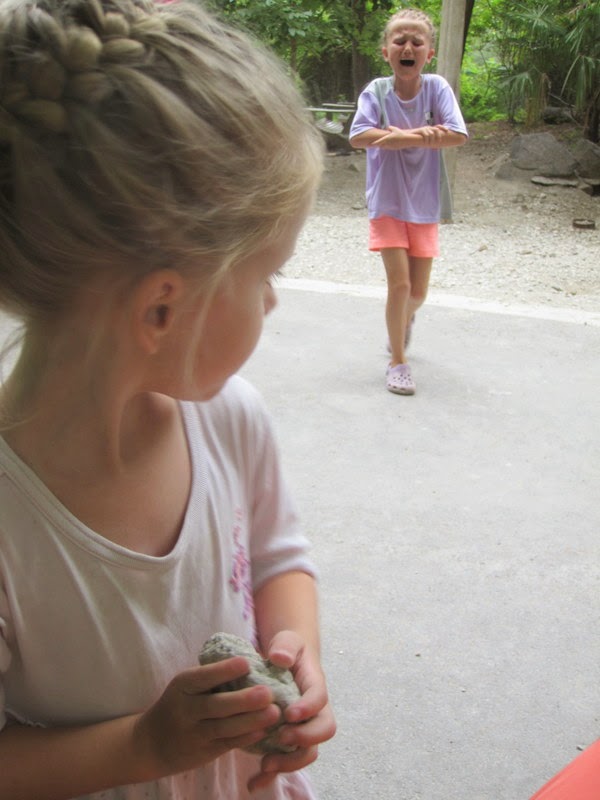 And here is Miriam getting really excited about another great find (she gets really into the dinosaur dig): 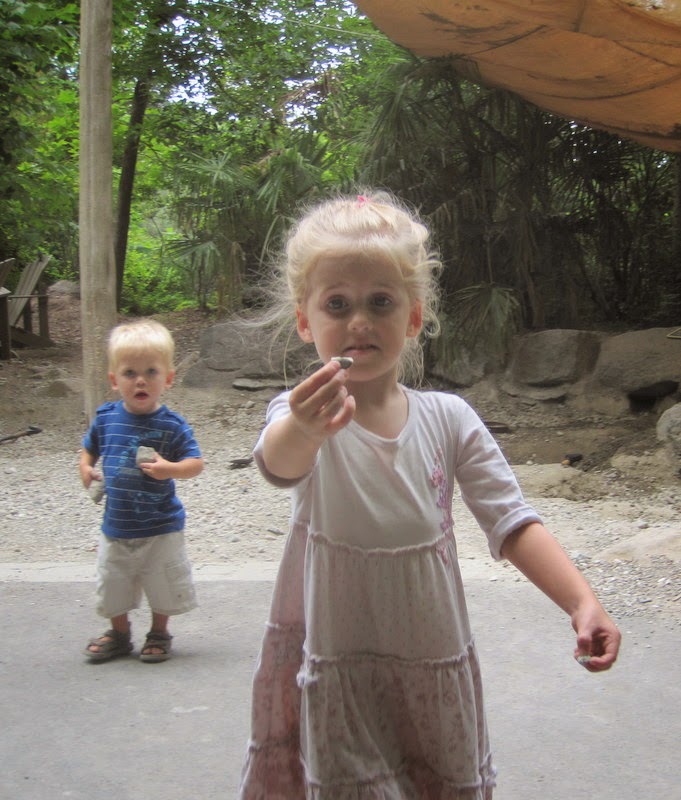 When we finally left the dinosaur dig to finish up the rest of the dinosaur trail Rachel got really excited about these big leaves: 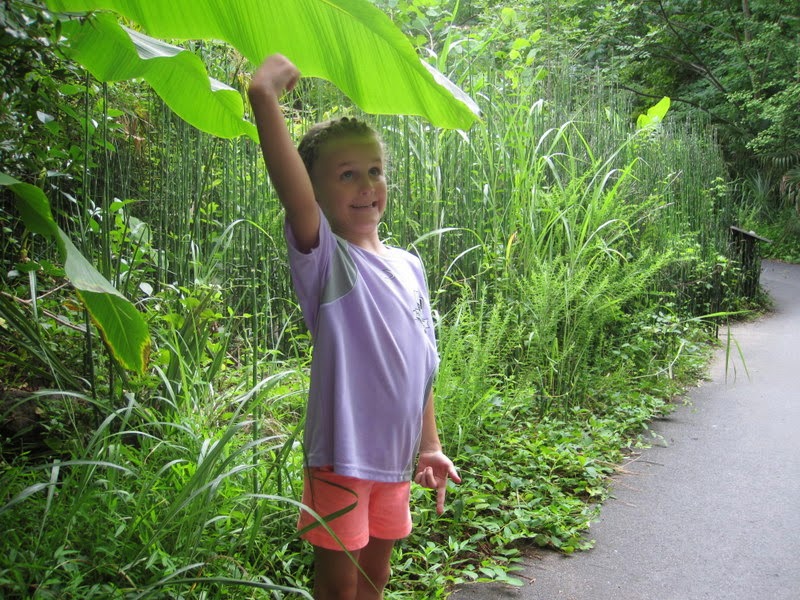 So Miriam got excited as well: 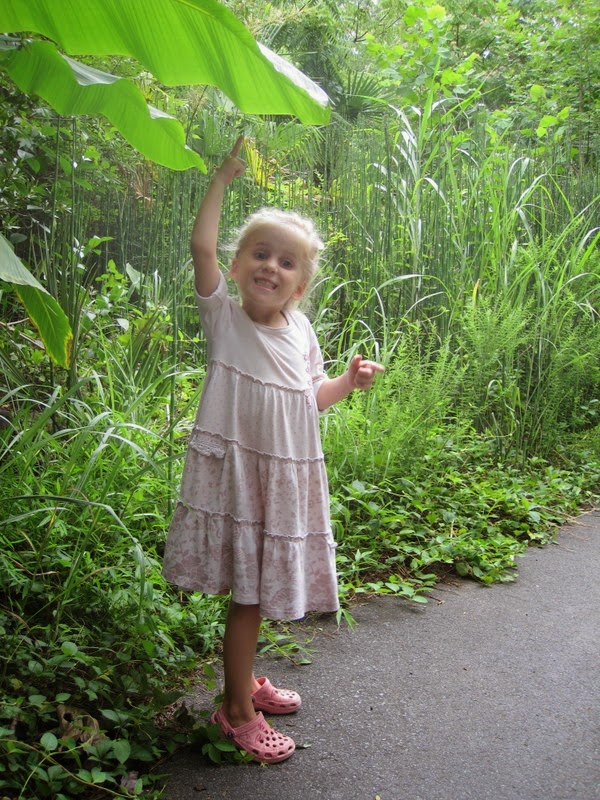 Benjamin fell asleep on the way home (because he'd definitely missed his afternoon nap) and I took a picture because I'm a sucker for sleeping kids. 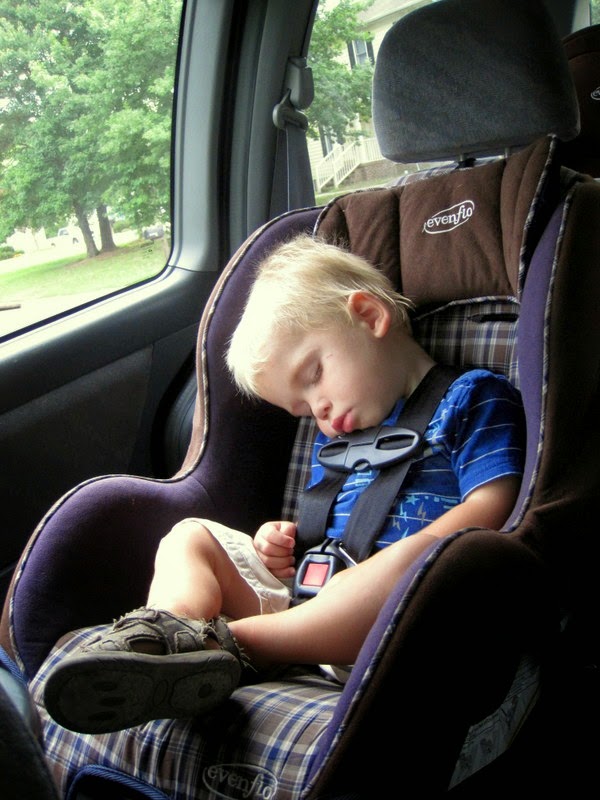 And then I took a close-up so I could be sure to capture his little puddle of drool: 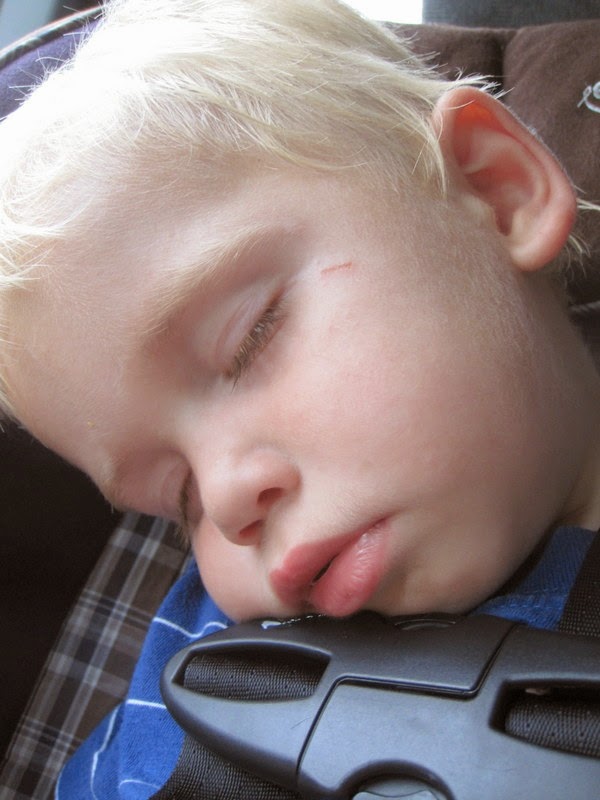 He was one tired little man!

It was certainly nice to get out of the house together (other than to go to the pool). I don't think we've done that in at least a month (I am so glad June is over. No one is allowed to get sick again until next year).
Posted by Nancy at 11:36 PM