Yesterday when we went to the library (and I promise I'll eventually stop talking about Philemon Sturges's vehicle books but...) we found a copy of I Love Planes! which we just had to check out. For some reason Amazon.com didn't recommend that book to me when I was checking out I Love Trains! and I Love Trucks! online. After reading it I understand why because while the books about trucks and trains were lovable, the book about planes was...meh. They kind of hit the wall with that one.

Benjamin liked it but no one else was very impressed with it. It seemed like they were trying too hard. They featured a dad in one story so they should probably feature a mom in this one, right? But they turned the mom of the story into an astronaut at the very end, which was fine because feminism. However, why didn't they just make the child in the story a girl obsessed with planes rather than a boy (who wants to visit his mom in outer space...)?

Each of the books features a little boy, which is interesting because Sturges raised a couple of daughters. Granted, that might be the illustrator's decision since the books never name the speaker by gender. Still, my little girls enjoyed the books when they were little. And I think that having a little girl loving trucks or trains or planes would be just as pro-feminist as having the mom be an astronaut.

Besides, we'd already travelled to the moon (in a hot air balloon(?) because that makes sense, though I do admit that much of the book is "wishing") so going back to outer space at the end seemed less climactic than it could have had we not gotten back from the moon a couple of pages before.

Anyway, it simply wasn't as charming as the other two books. Though Benjamin certainly enjoyed it and asked for it ("AGAIN!") as soon as we'd finished I don't think we'll be hunting the book down to add to our collection.


Instead we added several other books to our home library. We're participating in the summer reading program again this year and one of the perks is a free book. Each of the kids got to pick out a book. And I may have heavily influenced their choices.

Benjamin saw a book called School Bus by Donald Crews and was instantly in heaven. It's kind of a lame book, in my opinion. The illustrations were done on the computer in the 80s and let's just say that Crews knows how to use CTRL + V. But there's a bus on nearly every page and that was good enough for Benjamin. He's been reading it to himself nonstop. Whenever he gets to the end he tells himself, "AGAIN!" and starts over at page one.

Miriam had her eye on a Fancy Nancy book but then I saw And the Doorbell Rang by Pat Hutchins and quickly convinced Miriam that a literary classic was a much better book to take home than a Fancy Nancy book (besides, Daddy bought her a whole pack of Fancy Nancy books this one time when she was the only healthy one in the house and he took her to Costco so it's not like she's hurting in that department).

The last book we I chose was Whose Mouse Are You? by Robert Kraus. This book was the very first book I read on my own. I was pouring over the pictures during silent reading time in kindergarten when all of a sudden I realised that the words on the page were making sense to me. It was a very exciting day for me. And Rachel wasn't too impressed with the book choices anyway (none of them were even close to three inches thick) so she was happy to adopt my memory for me.

I leave you with pictures of Benjamin napping (since the prelude to napping is usually a story or two). This one is from a few days ago—he's napping with a book and his cup: 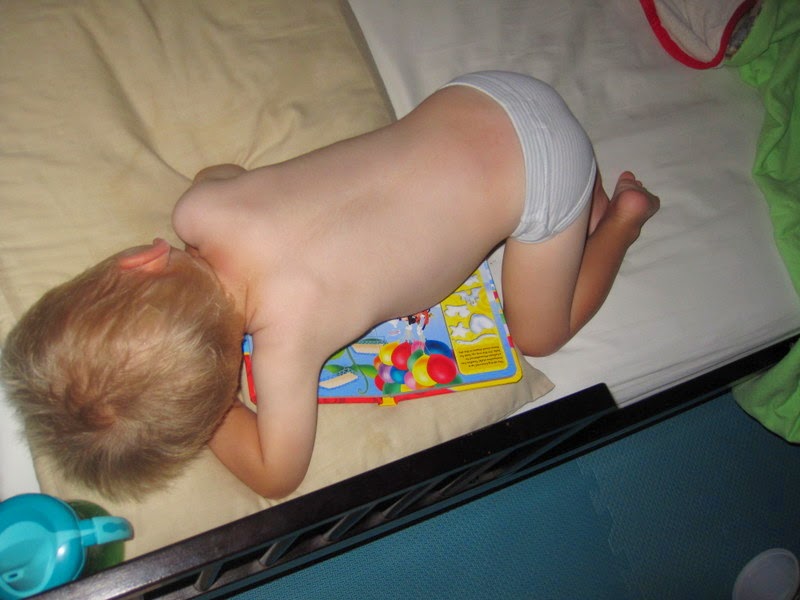 This one is from about an hour ago—he's napping with his bus and his car: 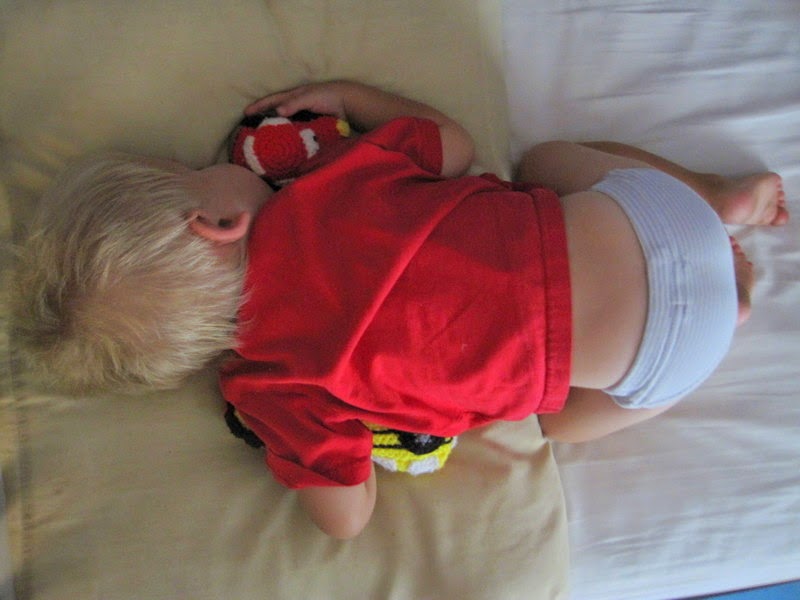