We were warned about Niagara Falls before we visited. We were told that they might be a little less impressive than we imagined them to be—rather like visiting Mt. Rushmore, which, let's face it, is kind of a let down. It's not that Mt. Rushmore isn't monolithic in proportion—because at 60 feet tall I'm fairly sure they're the biggest heads I've ever seen (for comparison, the Statue of Liberty's head (which I haven't seen except from an airplane, maybe) is only 8 feet tall)—it's simply that it seems like they should be bigger. You get there and you think to yourself, "Huh. I thought they'd be bigger."

I don't know if it's because you can't hike very close to them. Or if it's because films that feature them use photographic tricks to make them appear even larger than life than they are. Whatever the case, they're just a little disappointing.

Then again, I had heard so many disparaging remarks about Mr. Rushmore that by the time we could see the four presidents' faces I found myself rather surprised by how large they were—my hopes had been dampened that much.

So I wasn't quite sure what to expect when it came to Niagara Falls. I've been dreaming of going to Niagara Falls for a long time. When we were crossing one of Grand Island's bridges on our way to visit the falls Andrew turned to me and said, "Did you ever imagine you'd visit Niagara Falls with me?"

"I have done more things with you than I ever imagined I would," I said. "I was raised in a small town, remember? I'm not sure I ever realized how big the world was."

Because, frankly, Niagara Falls is small potatoes compared to some of the adventures Andrew's convinced me to embark on. Not that I didn't have any adventures before we were married, because I had some of those, too, but let's just say that the past 8.5 years have held more surprises than I would have guessed.

Anyway, when I was in grade 7 or 8 and my brother David was in grade 9 or 10 and we were living in that small town I mentioned, David got to go on a a band trip to Toronto. He has a picture of a squirrel attacking him in some park:

[David—picture or it didn't happen!]

And he told me all about Niagara Falls—how you could walk across a bridge to the States (for a toll; it's free to enter Canada, I'm just sayin'), how there was more water running over those cliffs than you could even wrap your head around, how he and his friends had such an awesomely amazing time.

I was so excited for band tour (technically I think we called it a camp? a retreat?) when I was in grade nine but...

We went to Banff.

(We also went to Red Deer later in the year for a competition—the day my grandpa died, actually—but that was also two hours away and it was only a day trip and we won a lot of awards but then I didn't even care because my grandpa died so that trip kind of stunk).

Not that I've ever been jealous of my amazingly talented, incredibly intelligent, and handsome older brother or anything, but come on—Banff?!

Banff was fun and all, but in the back of my mind I was hoping for something a little more exotic, a little less backyardish. And maybe a little less under five feet of snow. But I've been known to be picky.

Going into this trip I had in my mind two battling narratives of Niagara Falls: the "meh" versus the "legendary."

I have to admit, our entire family was pretty impressed (though less impressed with the visitor's center because that was a sketchy/scary mess). We parked in some random parking garage a short walk from the falls (because apparently the the official national park lot fills up quickly) and found our way to the park easily enough. We soon found ourselves walking beside the Niagara River, rushing along its way, frothing with white water, hurdling to its death-defying leap over the cliffs.

"This is already impressive," I said in hushed tones to Andrew. "That river is big. I don't think I've seen that much water in any river in Utah..."

(It was "because Utah" that our friend told us we wouldn't find Niagara that impressive—and Utah does have some spectacular landscapes Niagara, I think, can maintain its bragging rights.)

And then we got here and the river disappeared. 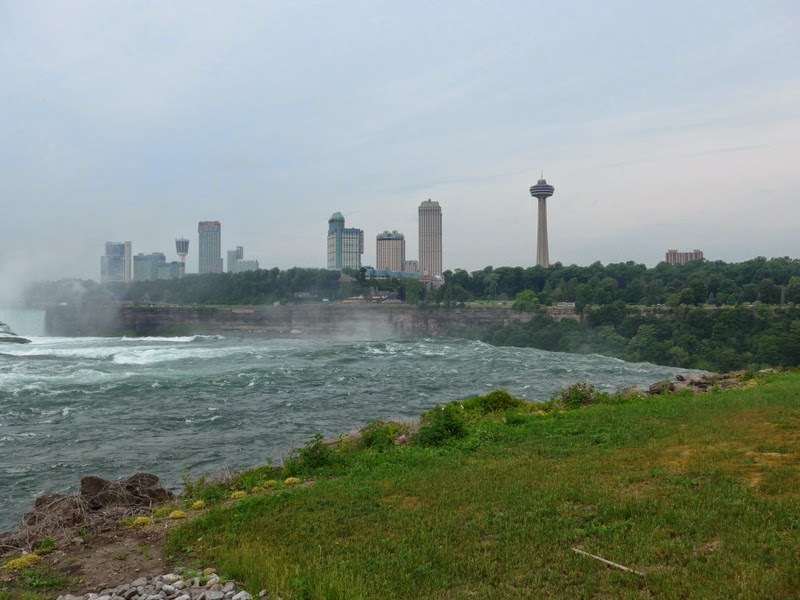 We both just stood there with our mouths open.

I have stood atop mesas and mountains much higher than the 167 feet (51 metres) that Niagara falls, peering into the chasms far below me—600 feet below me (and that was impressive enough—because I haven't been to the Grand Canyon). So, yes, the Niagara Falls were perhaps a little shorter than I was expecting (though I'm kind of getting used to stuff being short—have you seen the mountains out here?) but all that water! 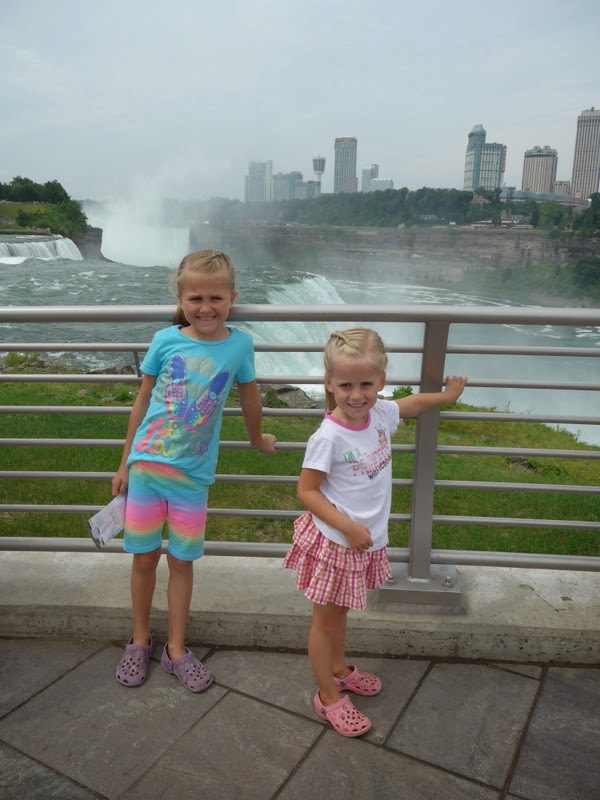 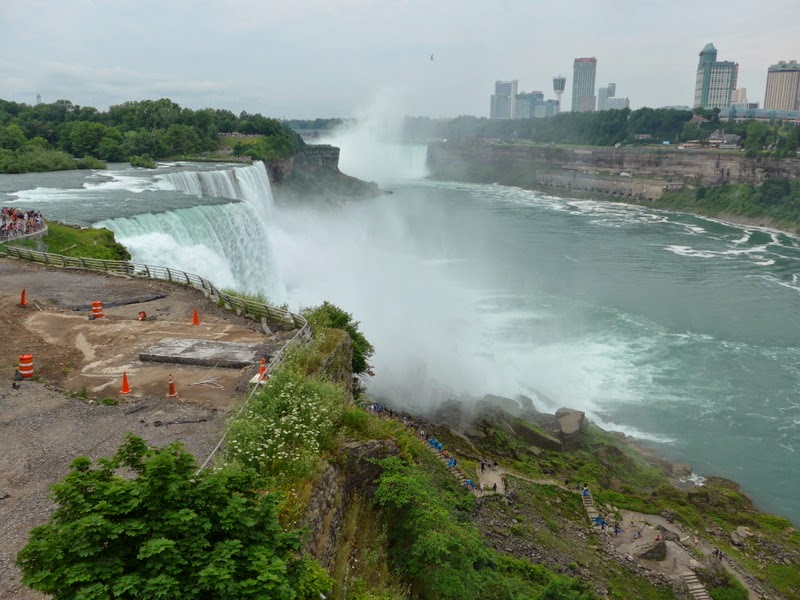 Rivers back west, for the most part, stay deep, deep in the canyons they've carved. We have a fair number of waterfalls out west but none of them can really compete with Niagara Falls when it comes to volume. You can see the mist rising above the skyline! It's crazy impressive the amount of water that flows over these falls. 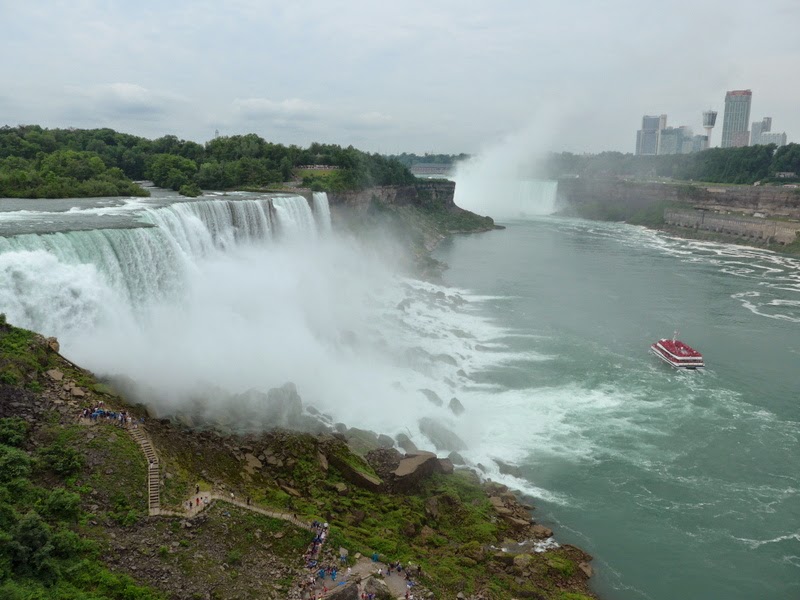 "The combined falls form the highest flow rate of any waterfall in the world!" How is it not mind-boggling to watch it all cascade to the rocks below? We're talking crazy, crazy, copious amounts of water. 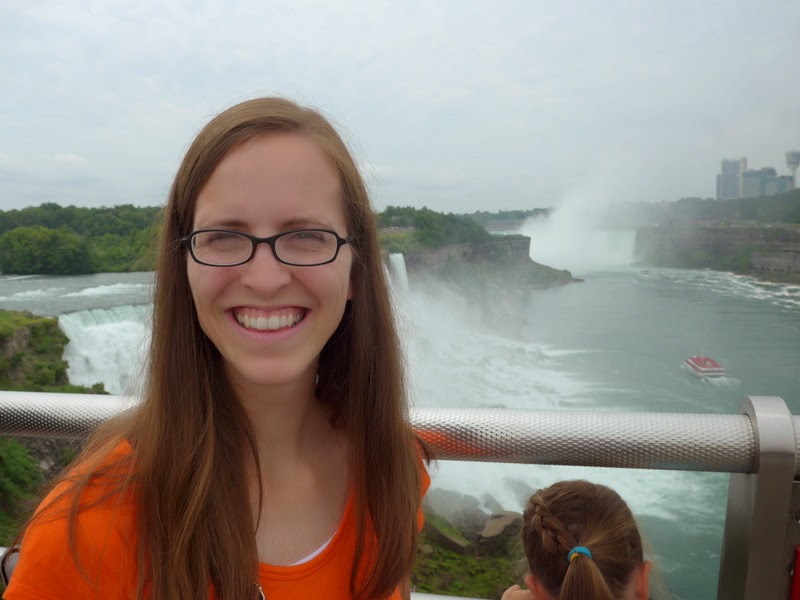 Since we're being honest, I'll admit that those numbers mean very little to me, except that I know that "million" is a big number and I've stood agape as I've watched that amount of water gleefully jumping over the edge of the falls and I can tell you—it's a lot of water.

So, that was just me explaining the shock and awe effect the falls had on us. Stay tuned to hear what we actually did.
Posted by Nancy at 12:02 AM