We had some friends invite us to a block party they were helping put on—with a barbecue and fireworks and everything. We thought we'd be brave and check it out. We walked all the way down there, noticed all the cars, saw all the people we didn't know, didn't see the people we did know, turned around and came home. 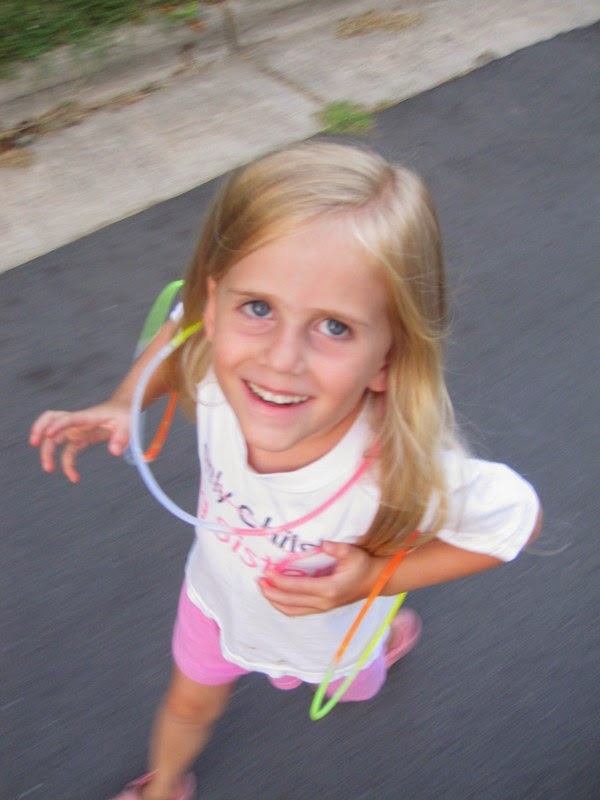 Andrew and Rachel ran to the store to see if there were any fireworks left to buy. After going to four stores they finally were able to buy the very last package of fireworks. That's good planning for you.

And, yes, Andrew took Rachel to the store looking like this: 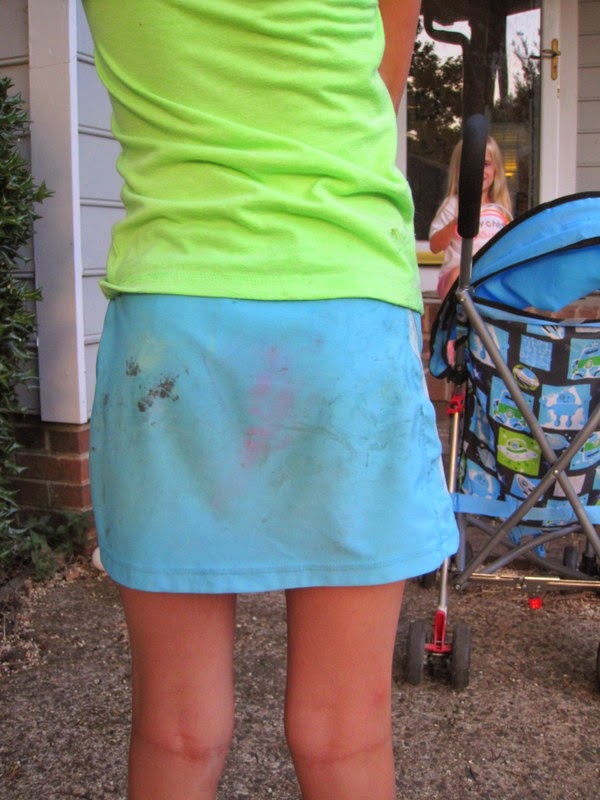 That child was filthy. FILTHY. We made her take a shower after fireworks so she wouldn't ruin her sheets. It was that bad.

Anyway, the package of fireworks they managed to find was relatively small so we were happy when our neighbours across the street invited us over to watch their display. We pooled our fireworks and put on a lovely show, but not until it was nice and dark and the girls and Benjamin (our street is very girl-heavy) had had their fun with the sparklers. 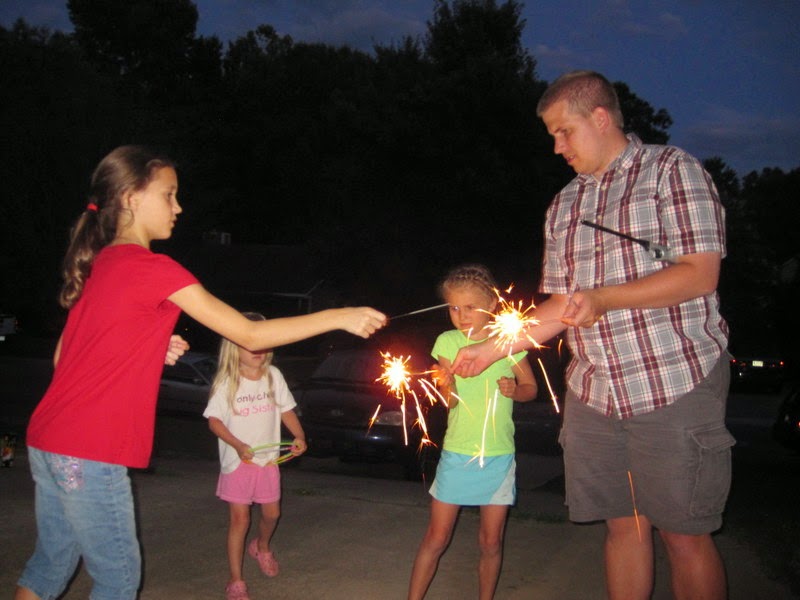 Miriam and two of our neighbours were very timid about the sparklers so we tried the hand-in-a-cup trick. 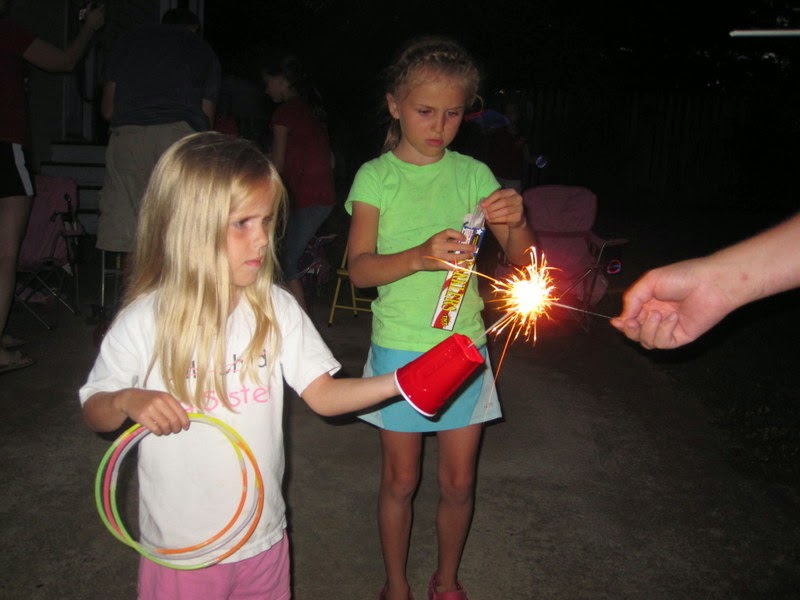 That helped Miriam brave the flame. 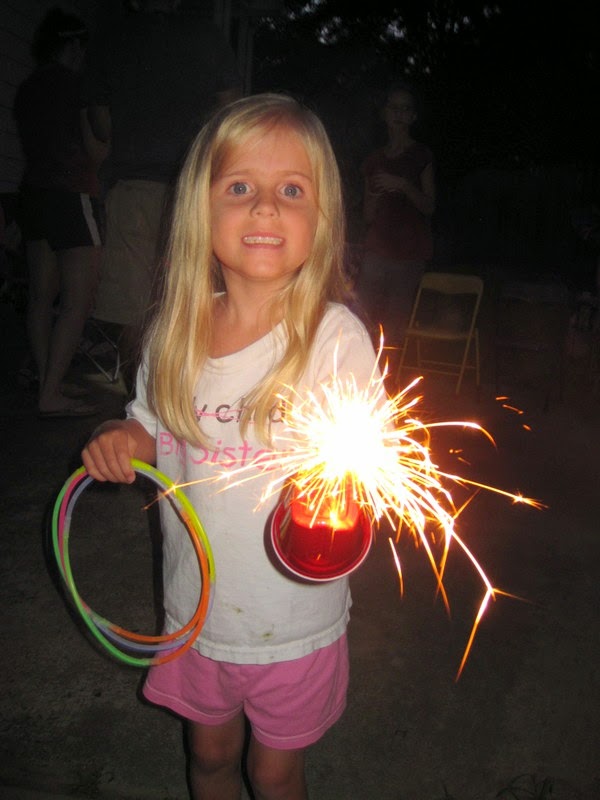 Benjamin had ambivalent feelings about the whole evening. "Eek! More? Scary! Again?" was his constant refrain. He couldn't decide whether to be terrified or excited (especially after the block party we skipped out on started letting off the aerial fireworks they'd purchased in South Carolina where I hear "everything's legal"). Once he got over his initial fear Benjamin was quite impressed with the sparklers. 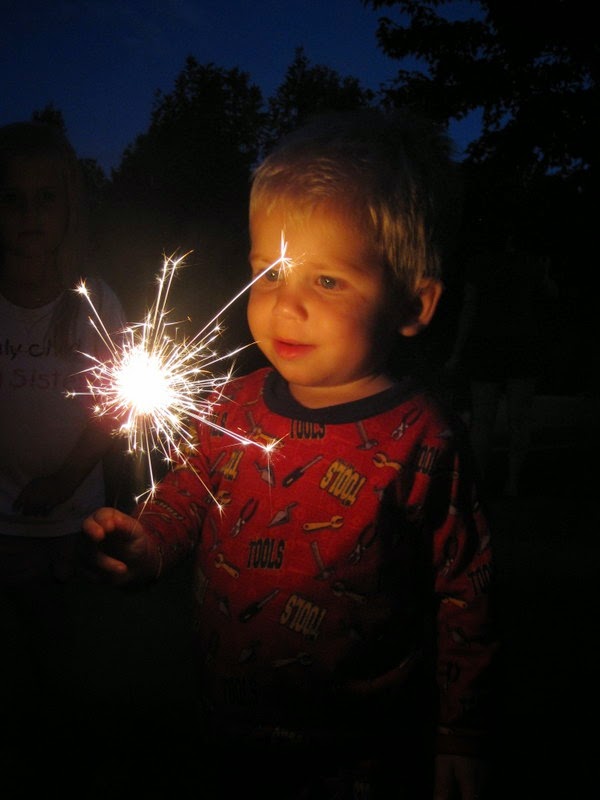 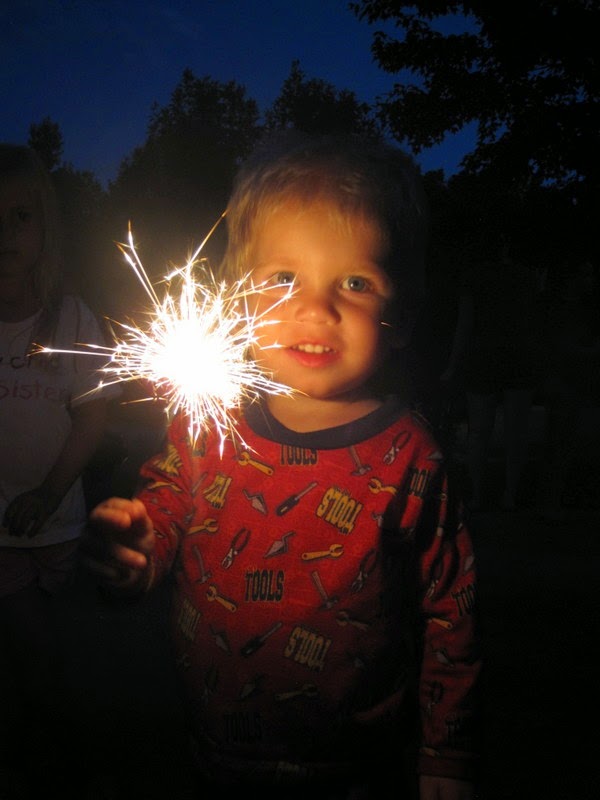 Rachel probably had the most fun with the sparklers. 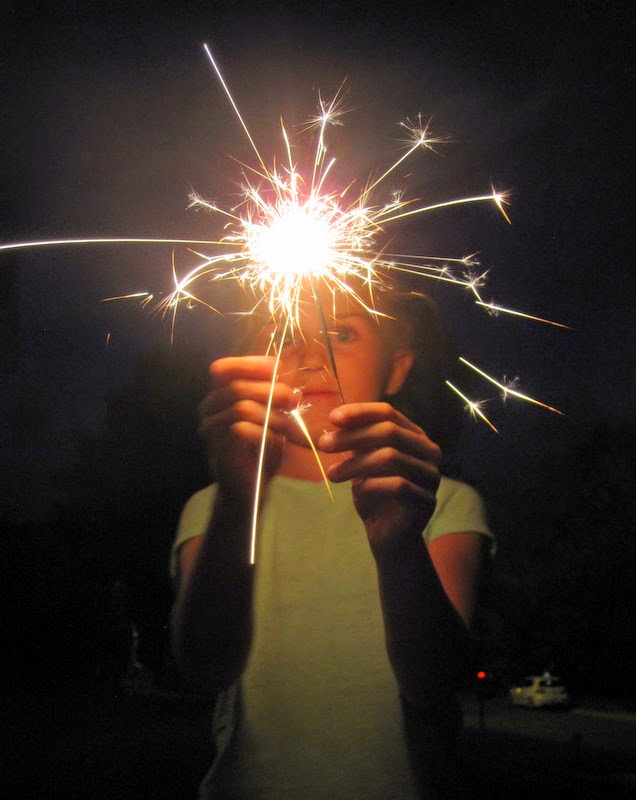 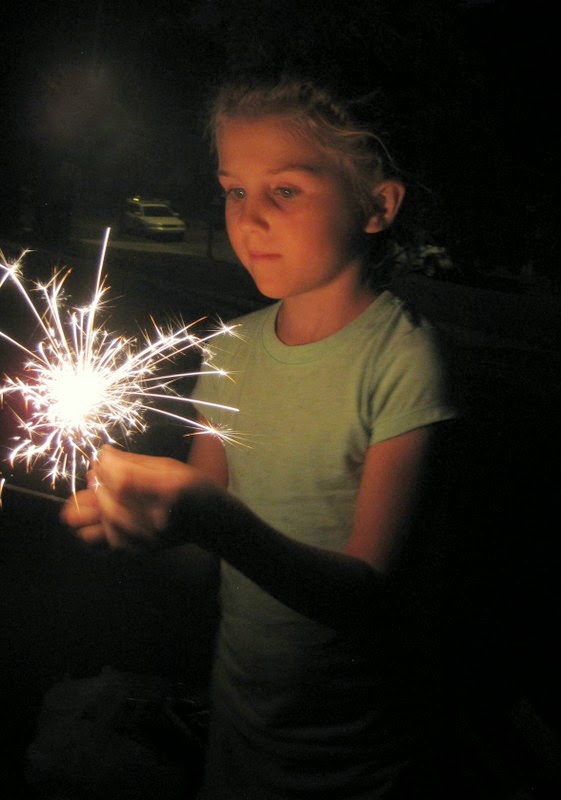 Except perhaps for Andrew.... 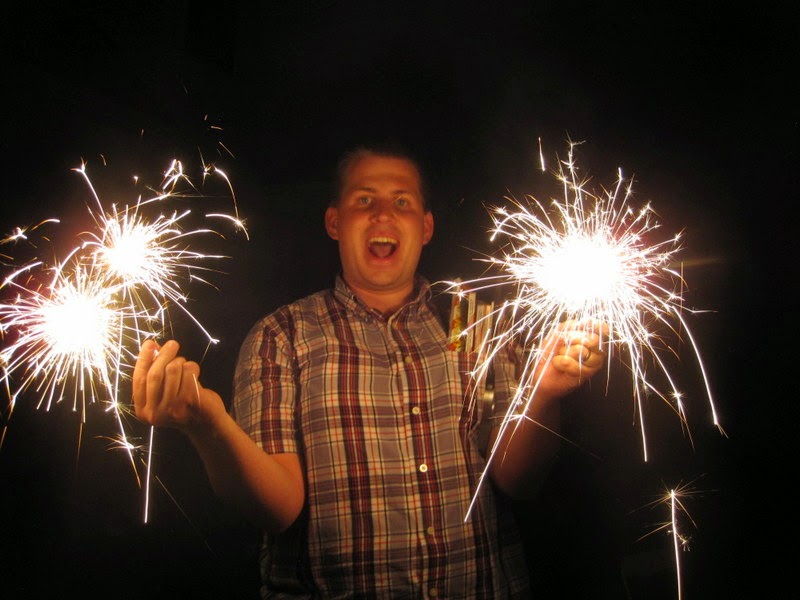 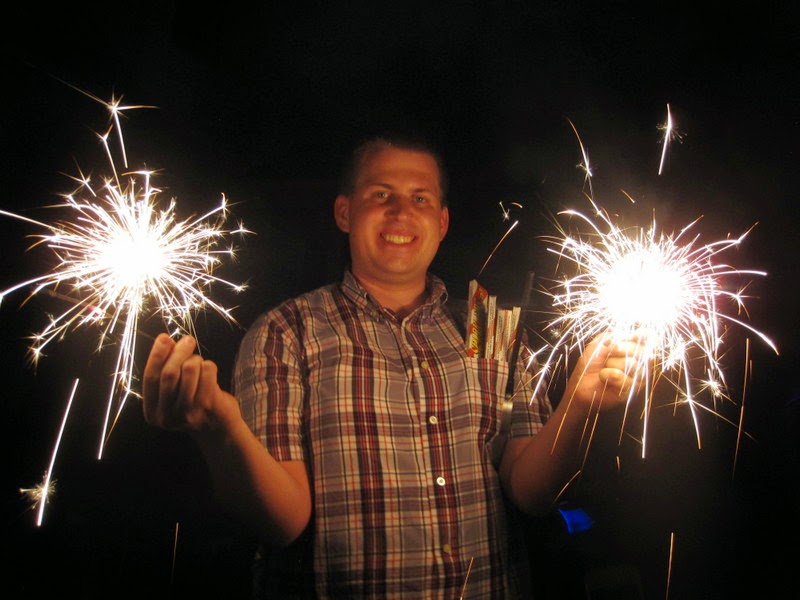 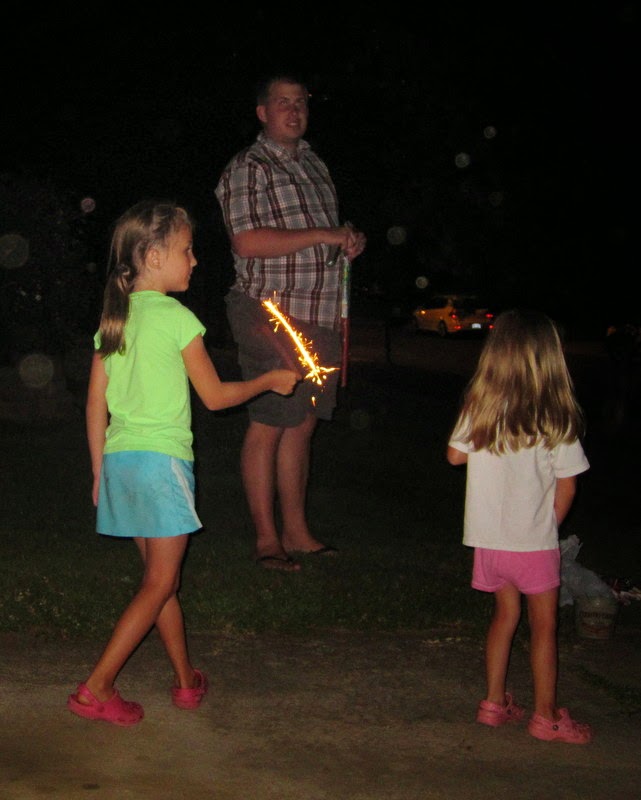 When everyone was finished with sparklers we started our little fireworks show. 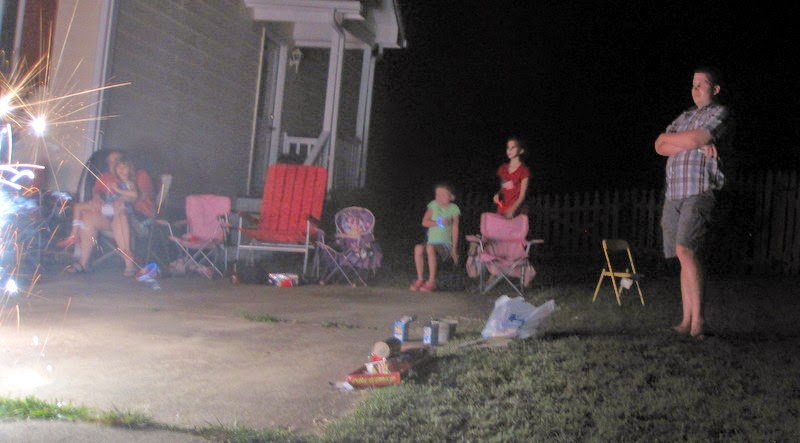 We enjoyed the fireworks from the block party when they'd explode high enough in the sky that we could see them over the trees. As an added bonus we also got to watch our super-drunk neighbours (they'd been drinking since early afternoon and had been getting increasingly obnoxious throughout the day) set off their fireworks.

We'd finished ours by 9:30 or so and Andrew suggested we get the kids to bed but things were still so wild that I vetoed his bedtime proposal and let the kids stay up until around 10:30 when things finally started to slow down.

Had we gone inside sooner we would have missed one of our neighbours super-drunk guests running down the street wearing a Confederate battle flag tied around him for a shirt while holding a firework.

"I'm pretty sure they're mixing them," I said, nodding down the street at the now-jumping-over-fireworks group.

They were getting so crazy with the fireworks that we were literally waiting to call 9-1-1 for them. One guy did end up burning his hand but not seriously enough to warrant serious help (but enough to warrant a lot of shrieking and hollering on his part and laughing on his friends' part). I wasn't sure when they were planning to end but it was getting ridiculously late for my children, especially since Benjamin had pretty much skipped his afternoon nap.

Fortunately, another neighbour drove down the street and got super annoyed at the group. They'd left a bunch of firework garbage in their driveway so she parked her car in the street, went to her driveway and started chucking the firework garbage back into the street while letting those "kids" know how she felt about their behavior. And that was the end of their firework show.

Last year they shot fireworks off their back deck into the woods behind our house. So at least they didn't do that this year. And at least we don't live in a desert. I can't even imagine how big of a fire they would have started had they done the same thing in, say, Utah.

The kids went to bed rather well. Benjamin didn't move a muscle once he was in bed. He called my name once but that was it. He was sound asleep.

Rachel asked if she could finish the last three pages of the chapter she was on and Andrew said yes. I was pretty shocked by his answer since he'd originally proposed bedtime an hour earlier, but he was like, "It's three pages!"

Andrew said it was probably time we stopped piggy-backing on other people's fireworks—now that the kids are getting older. We've never really done fireworks on our own. The idea is still somewhat baffling to me. Growing up we always went to professional town-sponsored shows, which were usually free. I have wonderful memories of attending fireworks at the rodeo stadium in Raymond and watching fireworks explode over Emerson Lake in High River. I also have memories of watching fireworks in British Columbia but I was young enough that I have no clue where we watched them.

You can't purchase or set off fireworks without first obtaining a permit (as well as permission from the locale you'd like to set them off at and the neighbouring properties).

So, I, uh, kind of thought Americans were crazy when I witnessed my first 4th of July.

Utahns get especially carried away with fireworks, from what I can tell. In Utah you can set fireworks off four days before a firework-approved holiday, on the holiday, and four days after. That's a total of nine days you can enjoy fireworks for one holiday. And people take advantage of that.

You can expect nightly explosions from June 30th through July 8th in honour of Independence Day.

But then—oh, but then!—there's Pioneer Day on July 24th, another firework-approved holiday in Utah, so you can also expect to hear fireworks blasting through the night from July 20th through July 28th.

It does start to get obnoxious after a while.

Fireworks in America are still a strange thing to this Canadian girl. I've lived in the states for over a decade now but for several years July was an optimal time to visit our Canadian relations, so I missed several Independence Days that way, though I think I've celebrated my fair share recently.

Here's a rundown of Independence Day celebrations Andrew and I have had together:

We have spent the past decade mooching fireworks off everybody else (or just not doing them) so perhaps for our tenth Independence Day we'll be all independent and set off own fireworks (though the Canadian in me is screaming no).
Posted by Nancy at 6:06 PM