Sometimes I think my children think I am way more creative than I am. Like the time Rachel asked me to help her make a Magic Tree House costume (as in the actual tree house in a tree). Or like the time she asked me to make a birthday cake of Tom Riddle's diary with a basilisk fang sticking out of it.

I spent quite a bit of time looking for inspiration on teh interwebz. There are a lot of Harry Potter cakes out there, but this was the site I found most useful. It shows how to make an old book. It was really quite simple. I followed the directions almost exactly as they are there: I used a strawberry cake mix to make a 9x13 cake, carved it into a book shape, and covered it with buttercream icing. Then I made some marshmallow fondant and let it sit in the fridge for a couple hours (not eight because who has that sort of forethought?). I rolled it out, flipped it onto the cake, trimmed it to size, and then marked out pages with the back of a butter knife. Using a pastry brush, I dusted it with cinnamon to make the pages look old (because I don't eat chocolate). I rolled out a second piece of fondant to make the top page all crumpled and dusted that with cinnamon, too.

For the basilisk fang I made up a batch of Rice Krispie treats (a brilliant idea suggested by my friend Cristina) and covered it in fondant as well. I dyed a bit of it yellow since teeth aren't usually perfectly white, right? Right.

Attaching it to the cake was tricky (and even now it is slowly falling over). I cut a small X through the fondant and then literally stabbed it into the cake. I used a few toothpicks and a cardboard stand to help hold it up. These inedible parts mostly got covered with "ink."

We made our own gel icing to make the ink, which was incredibly easy, really (I used almond flavouring (for the buttercream, fondant, and gel icing) because that's the only clear flavouring we have on hand). We made a trial batch yesterday and I used too much corn starch and it hardened into a gummy bear substance quite quickly. Today I used less corn starch—perhaps a little too little—and it didn't harden as quickly...or at all.

We dyed most of the gel green for ink but Rachel wanted to also turn some red for blood.

We had big ideas for what we wanted to write on the cake but the gel icing was too runny and I didn't have a decorating tip small enough to control it, so the text ended up big and runny.

Rachel wanted me to write Hello, Rachel Heiss. My name's Tom Riddle. How did you come by my diary?

And then she wanted to write Because it's my birthday!

But we didn't have room for all that.

All in all we're quite happy with the results! And I will be stashing this idea away for when I have to do a pirate-themed cake (because I'm sure that's coming down the pike). Can't you just imagine a pirate treasure map on this "old paper?" I can. 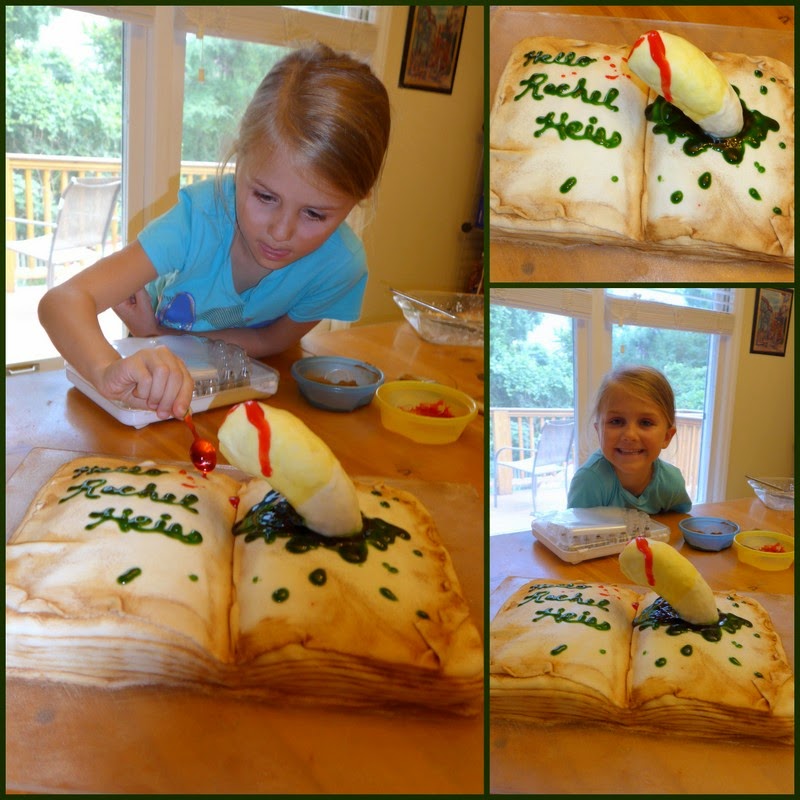 Happy Birthday to my sweet baby Rachel (who dreams of being Hermione—and if not Hermione, Hermione's best friend).
Posted by Nancy at 5:24 PM