Even though we had warm comfortable beds to sleep in last night Benjamin was determined to stay up as late as possible, so it was a fairly rough night for me.

Andrew fell asleep before anyone, probably. I put the girls to bed in the other room but then Rachel wandered back into the room Andrew, Benjamin, and I were in so she could read beside me while I helped Benjamin fall asleep. There wasn't room for Andrew, Benjamin, and me on the bed (it was a full bed) so I put Benjamin to sleep on the floor (because he was not going to sleep in the pack'n'play). Rachel eventually fell asleep beside him and Andrew was sprawled out all over our bed, so I did what any logical person would do. I scooped up Benjamin and climbed into bed with Miriam.

Our night was still filled with plenty of tossing and turning and middle-of-the-night potty runs (Benjamin's been waking up and fussing when he needs to go potty instead of going in his diaper, which is both good and bad depending on whether I want to get up and take him potty or not (some nights it's just harder to get out of bed than others)) but I woke up feeling relatively awake.

Jenny's mom made pancakes for us in the morning, which our girls thought was amazing. Pancakes are a dinner staple at our house. We rarely have them for breakfast.

We headed out only 45 minutes behind schedule and I can't tell you much about the drive because both Benjamin and I fell asleep soon after we got in the car. I can tell you that when we woke up we were in some kind of "targeted enforcement area" and there were big yellow warning signs every half mile (or something ridiculous like that).

"Buckle up next million miles," we were told in bold letters.

"Where are we?" I wondered. "And why does no one seem to know how to drive?"

The signs went on and on. It seemed as though we'd barely pass one sign when another one was ready to tell us what to do. Slow down. Be courteous. Keep a safe following distance.

"These signs are getting awfully naggish," Andrew said. "What's next—'Change your underwear?'"

The kids thought that was pretty funny. I was happy to leave all those signs behind us when we got to the part of New York where people apparently know how to drive.

Our first stop was Watkins Glen State Park, which several of our friends highly recommended. We hadn't done much research and weren't really sure what to expect and ended up wishing we'd allotted more time for this adventure. Our original plan was to eat a picnic lunch and go but since we had to pay $8 to park we figured we should take our time. There's a pool (which we didn't use) and hiking trails (which we did use) and a bunch of other things.

The kids enjoyed running around while we ate (I'm not sure how much eating they actually did).

Usually I think Benjamin looks like Andrew 100% but in this particular shot I'm seeing a bit of my looks coming out (at least, he's reminding me a lot of David's baby pictures): After lunch we headed into the gorge to do some hiking. It was a beautiful hike. The girls were quite apprehensive at first but later Miriam remarked, "I'm glad we came to New York. At the first of all I didn't think I would really like it because it was boring but then we got out of the car and I found out New York has mountains!"

Here she is with a pond full of lily pads, which she thought was neat. 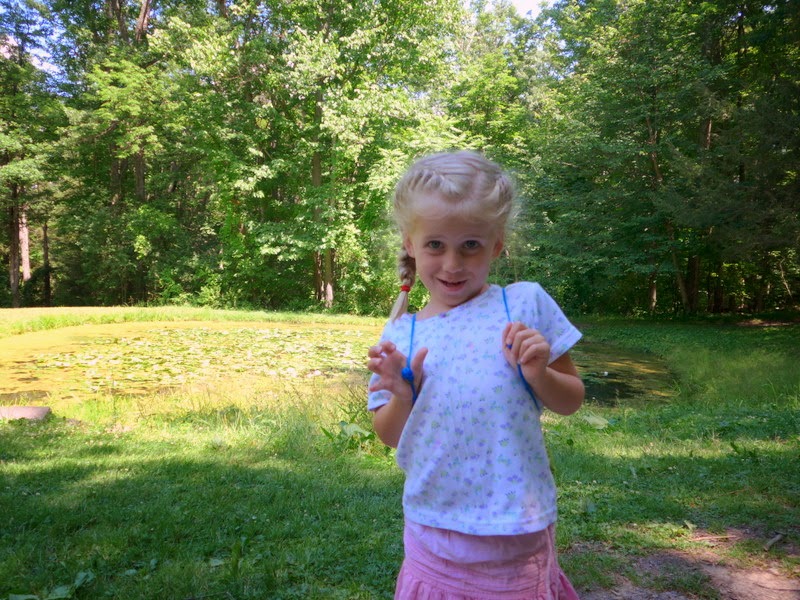 The girls continued to be afraid of everything for quite some time, including stopping on this bridge (and just in case you're wondering, Rachel's outfit will be retired before the school year starts because...apparently she's grown). 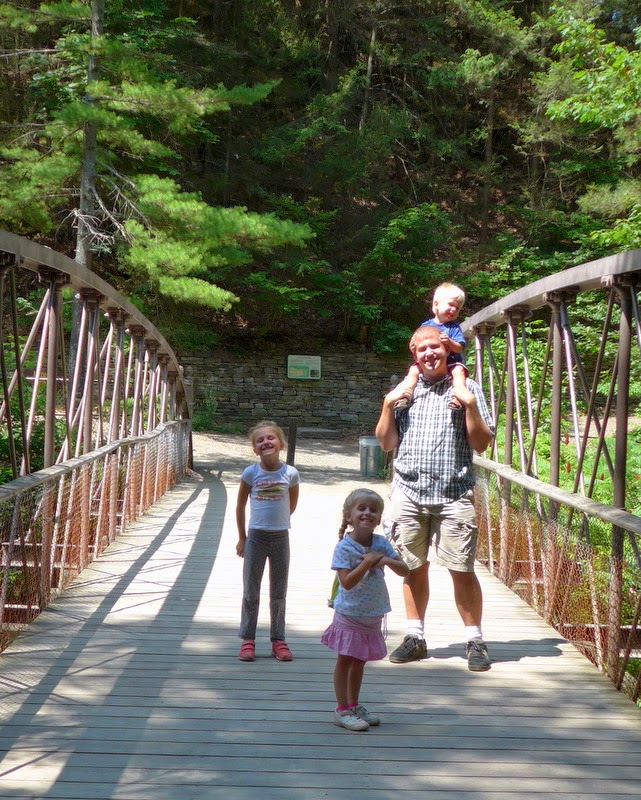 In their defense, it was quite the drop to the river below. Their fear got to be cumbersome, however, when they both insisted on holding my hand on the trail—because it was so scary. I was like, "Girls! There is a wall between you and the cliff. A wall. You don't have to cling to me." 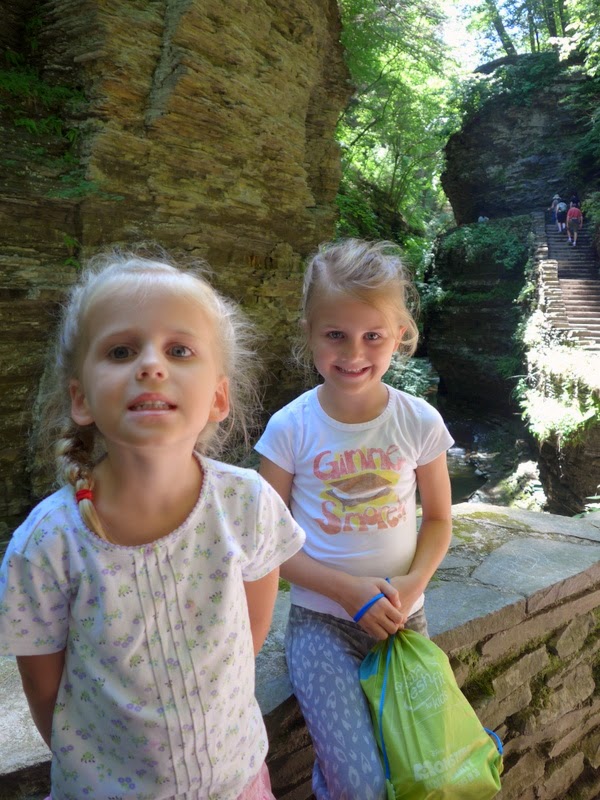 This was right after we went through a tunnel that the girls were petrified to enter. Before they agreed to follow us through it, Miriam had to verify that there was, as she put it, "an out." 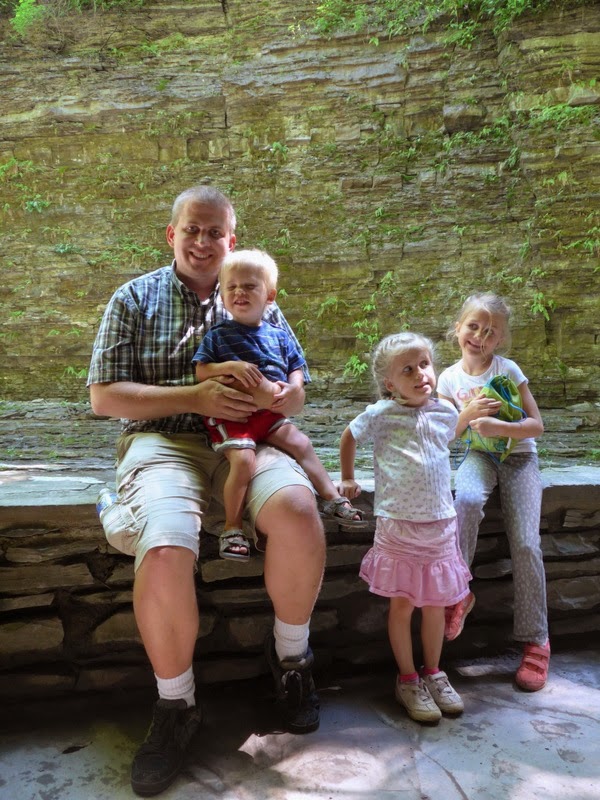 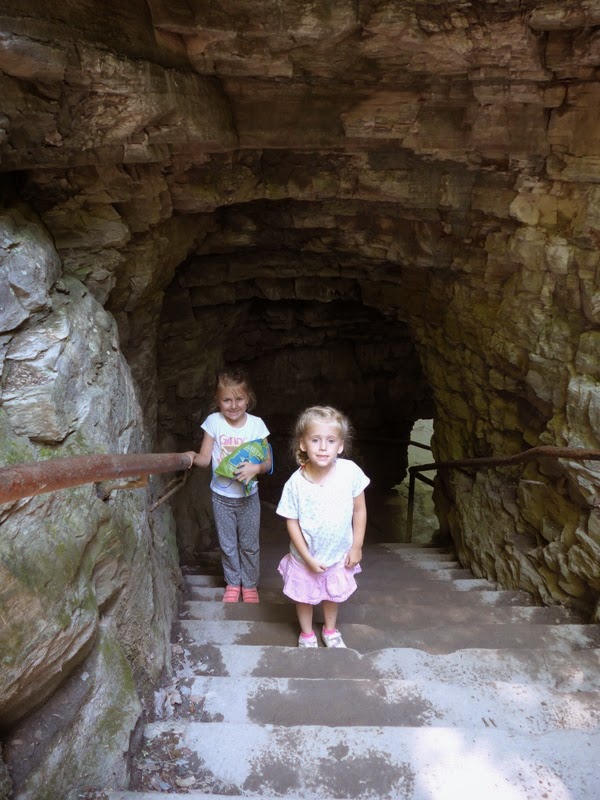 And here we are together: 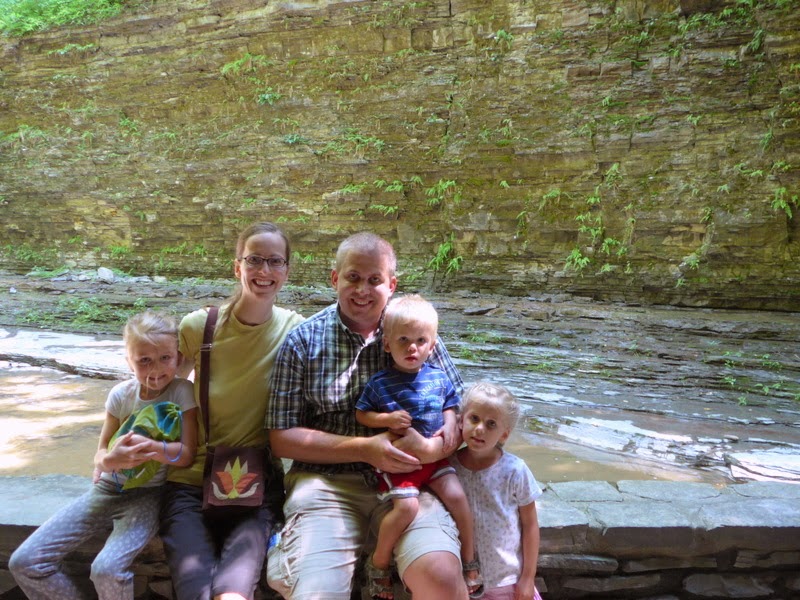 The trail was so crowded that people were tripping over each other to take a picture of our family together (or any family together). We ended up taking family pictures for others in return, of course.

At one point a girl was walking behind me and she started talking about how this hike was good practice for the 3-day backpacking trip she'll be doing through Zion National Park later this summer. She's from Texas, apparently, and they don't have much in the way of elevation changes. And I thought to myself, "Oh, sweetie."

Because this hike wasn't exactly a hike. It was like walking single-file down your elementary school hallway (if your school hallways happened to include several flights of stairs, which, incidentally, mine did).

Zion National Park has its fair share of easy trails, paved for wheelchair access, and simple enough for a toddler to complete. I know because when we had the Anderson family reunion down there those are the trails I stuck to. Because I had toddlers with me.

But if this girl is doing a 3-day backpacking trip...?

The gorge itself was impressive, though it also seemed familar. Andrew described it as "Southern Utah—but green." 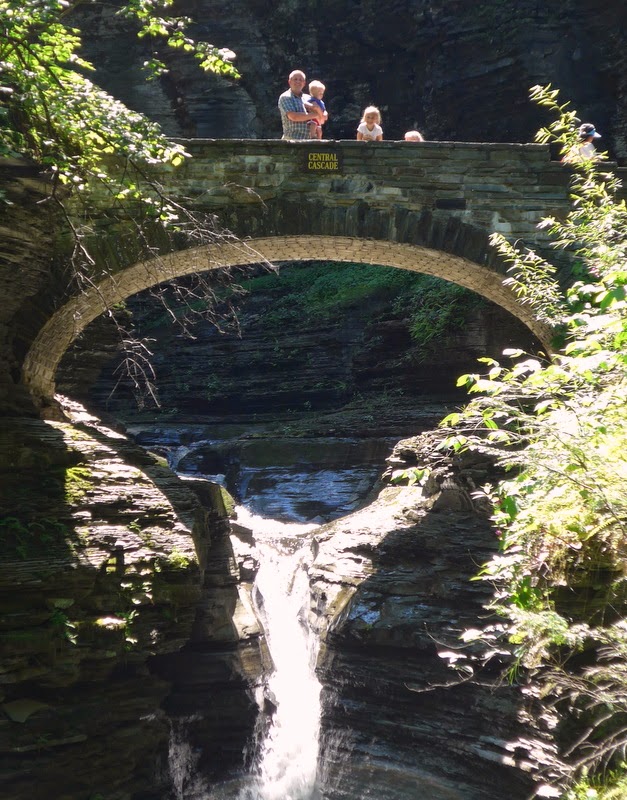 But you weren't allowed in the gorge. It seems (to me) that out west when you hike through a gorge the gorge is the actual trail. You hike through the river from one end to the other (I'm thinking Red Rock Canyon in Waterton, I'm thinking Sulfur Creek at Capitol Reef, and other hikes I've already mentioned). I'm sure there are hikes in the east that are a little more "wild" but this one was rather tame (which was perfect for our kids). 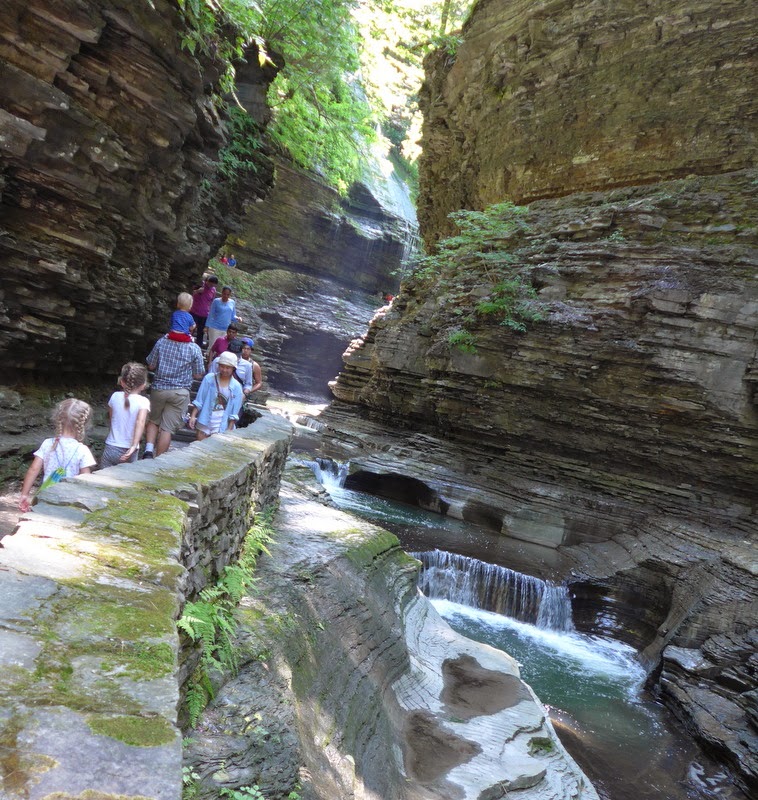 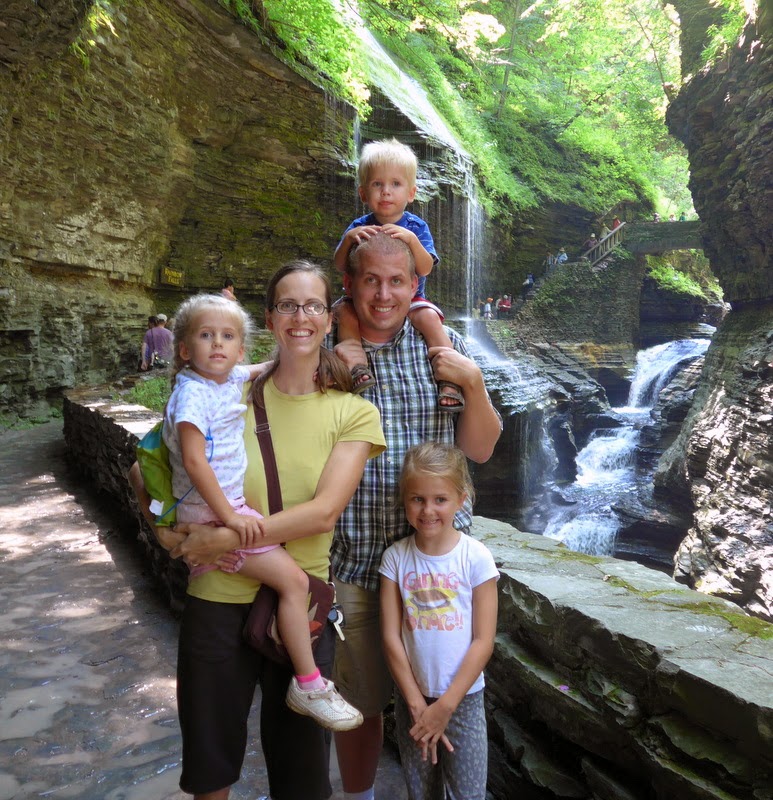 You're not allowed off the trail and swimming is prohibited—but don't think our kids didn't ask to go when they saw these beautiful pools sparkling below us. 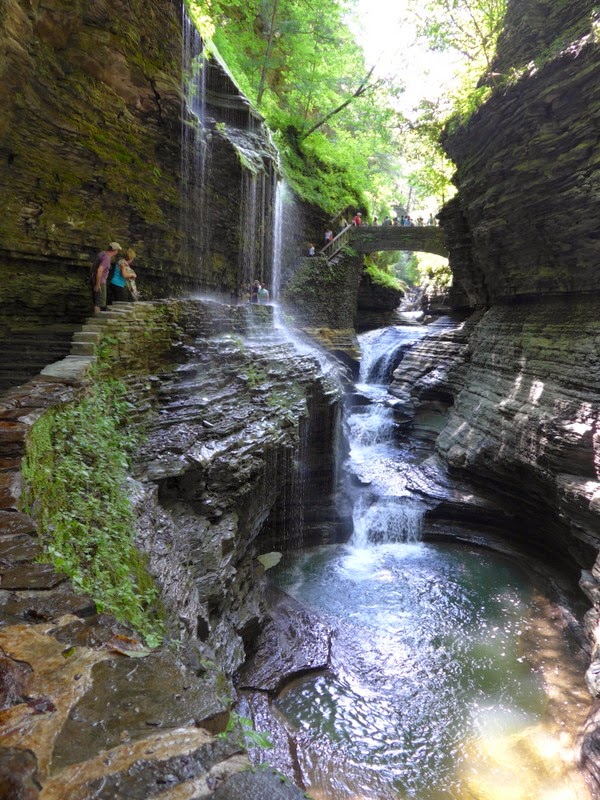 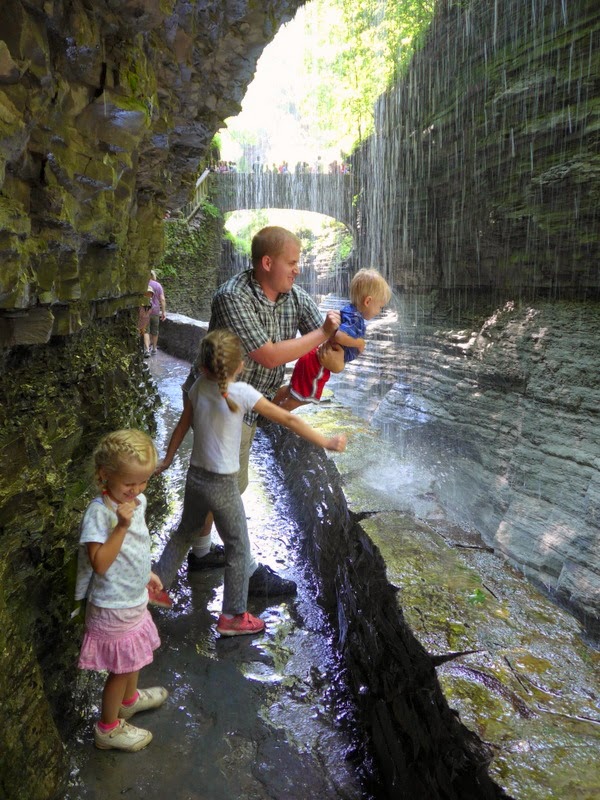 Benjamin was pretty happy about getting to take a shower at Rainbow Falls. 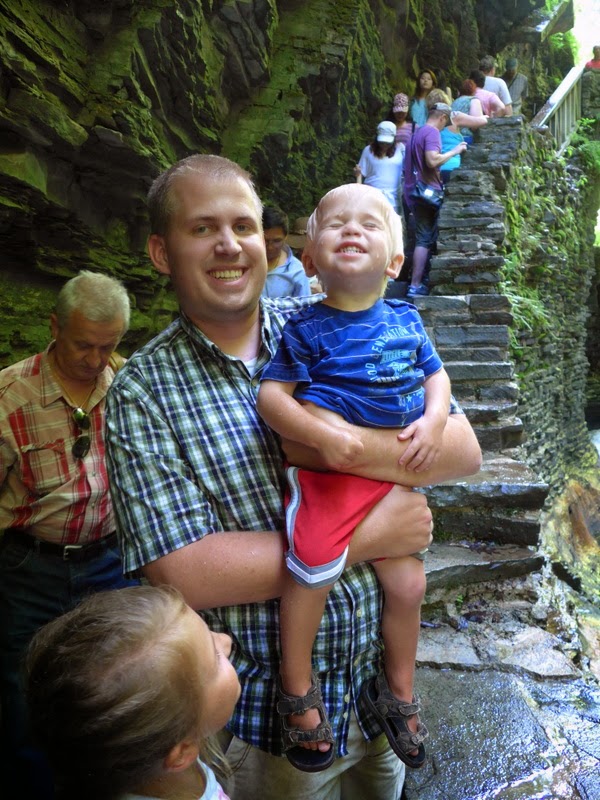 His grin is to die for. Complete strangers were stopping to take pictures of his smile. 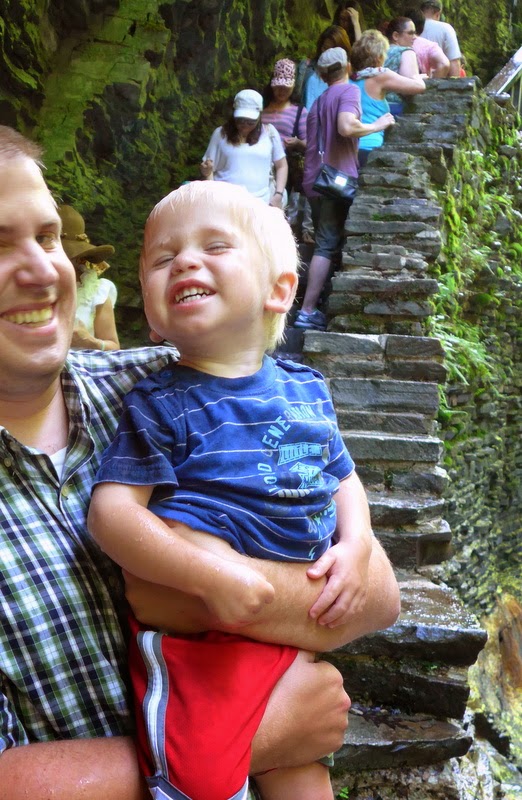 We turned around right after the waterfall because we had to get moving, though it would have been fun to explore more of Watkins Glen. Perhaps this is a place we'll come back to someday...

Benjamin was feeling pretty sleeping on the way back and kept resting on Andrew's head. 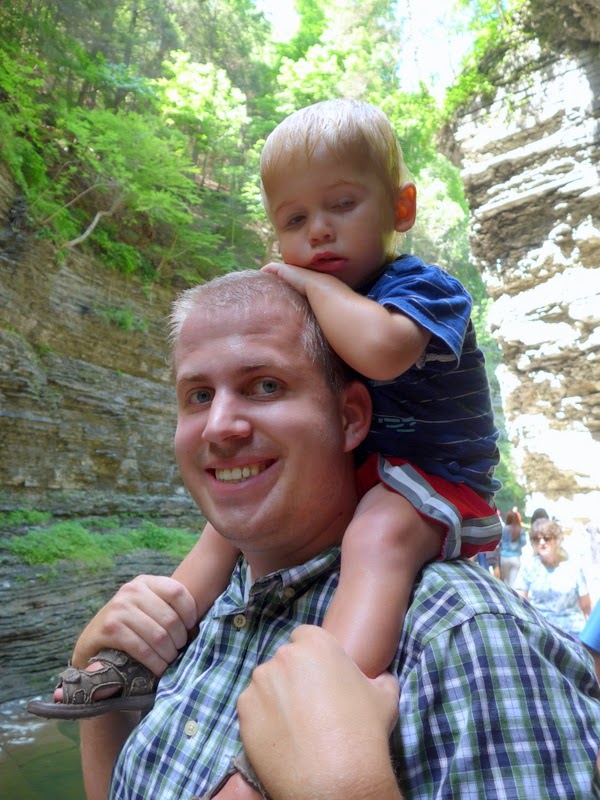 But he'd perk right up when you'd ask him to smile! 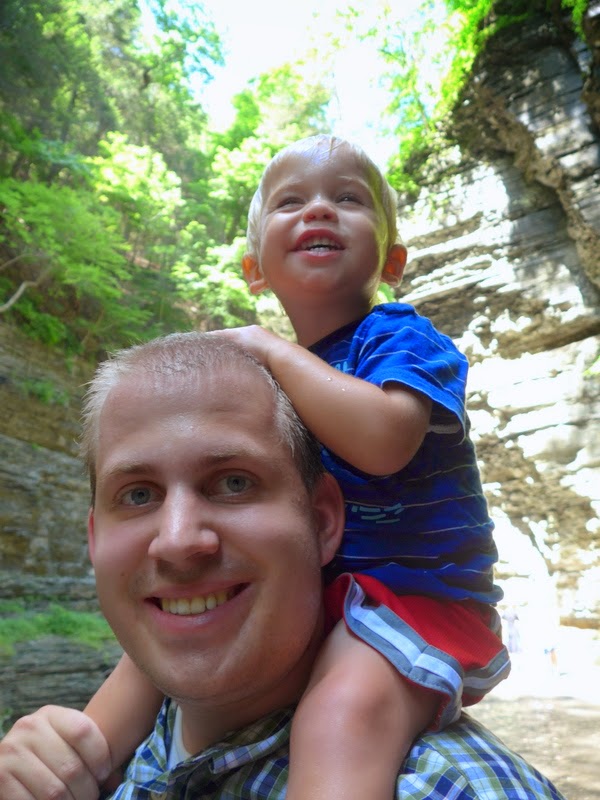 From Watkins Glen we had about a 45 minute drive to Waterloo, which was another one of our stops (but I'll write about that another day because I'm exhausted and need to go to bed). The kids were upset that we wouldn't let them put on another movie but we told them that they had to find ways to entertain themselves (which they're really quite good at).

The girls took turns drawing portraits of each other and spotting cows out their windows while Benjamin took care of Baby Norah. It was a lovely drive through the countryside of New York. 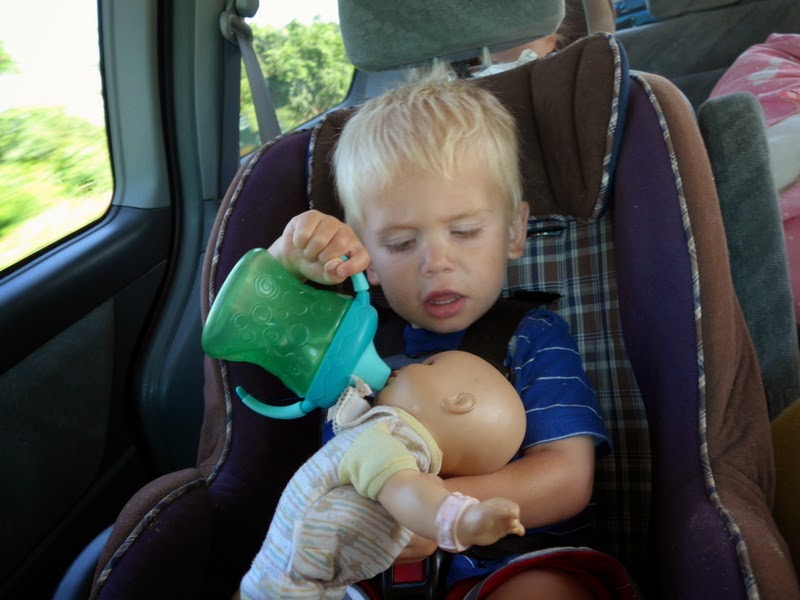