When I was little my mom used to say (usually when she was upset with either me or one of my siblings) that she always loved us but that she didn't always have to like us. It's a distinction I can honestly say I didn't fully understand until I became a parent. I love my kids so much but, uh, there's opposition in all things, right?

Nobody can drive me bonkers like my own children can. 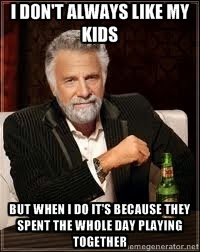 But today? Today they spent the whole day playing together. All three of them. Nicely.
They:
Oh, and they also played doctor together. If you've been following along through the month of June you'll know that it wasn't a kind month to us. I've only recently declared myself back to full health. Rachel got sick the very beginning of the month (for a full week with one visit to the doctor and another one to the ER, diagnosis: tick-borne something or other). Then Andrew and Benjamin got sick with a cough and runny nose and low-grade fevers. Andrew plowed through his cold with the help of DayQuil. Benjamin ended his cold with a case of pink eye. Which he gave to me and Miriam.

Miriam and I also ended up with not-strep throat (which my friend recently got—though I wonder if she actually got strep?—and described it as "strep meets death" which is a fairly accurate description) and while Miriam's symptoms were fairly mild (but bad enough that we took her in for a strep test) I was flat on my back for over a week. My body ached from head to toe, I ran a constant fever, my tonsils were swollen to ridiculous proportions, and I couldn't open my eyes.

Oh, and then I had a drug reaction to the antibiotic and was half-blind for another week and a half, including when I took Benjamin to his well-baby visit and squinted at his pediatrician (who probably thought I was crazy) the entire time I spoke to her.

That brings us to today.

We're all healthy (knock on wood) and happy and my children decided to hilariously reenact everything they know about medicine:

Miriam: We need to see this baby right away. It has a tick-borne illness AND a mosquito-borne illness AND a really high fever.Rachel: Thank you, nurse.Miriam: And this puppy is probably fine to just see in the waiting room. I don't want to take it into the emergency room.Rachel: Take it into the operating room. Here, Benjamin, you pet it while I hold its mouth open. MEDICINE! MEDICINE! NURSE!*******

Rachel: Now, tell me. Has he ever broken a bone in his body like his back or his neck or his toe?
Miriam: Well, I don't know...but I know he has kid-uh-neys.
Rachel: That sounds bad.

Benjamin: A my turn!
Rachel: Okay, okay, here's another patient! You just help calm her down.
Benjamin: Okay. A medicine. A medicine.
Rachel: Be careful with the baby! She's sick! Let's just take her blood pressure and then I'll send home a box of medicine for her.
Miriam: I looked at the store. And they had no medicine. And we have no medicine in our closet!
Rachel: I'll just have to give her a shot then, is that okay?
Benjamin: Eek.

********
Miriam: She just had a short sickness but now she has something wrong with her teeth. So can you be a dentist?
Rachel: *sigh* No. Benjamin, my assistant, is the dentist. You'll have to set up a dentist room, Nurse Miriam. Benjamin, can you look in that baby's mouth?
Miriam: I'll put the dentist room in our room.
Rachel: But that's the operation room!
Miriam: It can be both!

They had chairs from their little tables-and-chairs sets lined up in the living room and had arranged a table with an assortment of books for patients to read while they waited.

Benjamin's bed was the regular doctor's office and the rest of his room was the ER.

The girls' room was the operation room...and later the dentist's office.

This game lasted for hours. Listening to them play was the most fun I've had in weeks.

The best part was probably that they willingly cleaned up between games. And they even initiated the clean-up about half the time, which meant no nagging on my part, which was awesome.

Today was so awesome that I managed to do laundry, make dinner, and make dessert.

Besides which, the last time I made dessert was...I can't even remember when. So that made today even more exciting.

Turns out making cream puffs is much easier than I thought. (So, yes, Benjamin's doctor, we will be fattening him up. We will all be fattening up because these things are basically eggs, butter, and pudding. And they're super easy to make!)

The recipe said to drop the batter onto a cookie sheet "by tablespoonfuls" so that's what I did but I think next time I'll do it by teaspoonfuls because I now know where the "puff" part of "cream puff" comes from. These things seriously puffed up in the oven. They were the biggest cream puffs I've ever seen.

Interestingly enough nobody complained about that. 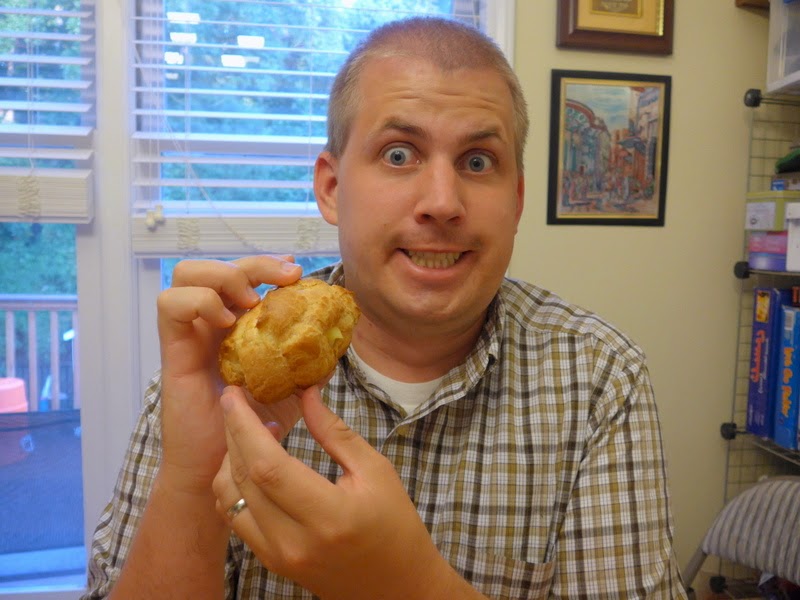 Here's my foodie shot...on an Elmo plate because nothing says gourmet like Elmo: 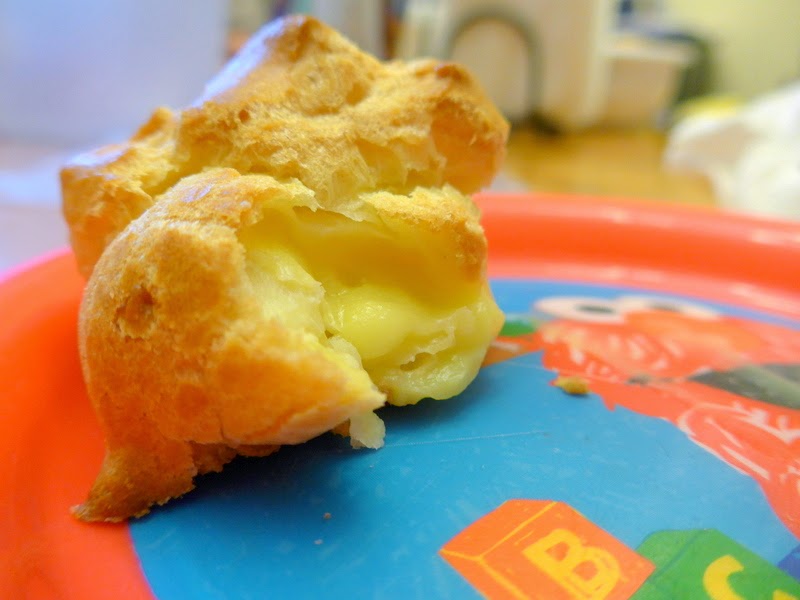 We each had two but when the girls asked for thirds I had to put my foot down.

The more time she spends reading the more time she spends talking like an eighty-year-old woman. But I told her that cream puffs would be an acceptable breakfast food. The recipe is eerily similar to German pancakes (German pancakes have a little less butter and a few more eggs but otherwise they're practically twins) and that's an acceptable breakfast food so why wouldn't cream puffs be?

What else made today awesome? Let's see. Family Home Evening.

Yes, there were a few tears (you can't have family night without tears) when we were singing our second opening song* and Miriam bumped into Benjamin who thought that was an invitation for wrestle-mania and knocked her to the floor and stood on her hair and then body slammed her.

* We've sung Jesus Wants Me For A Sunbeam every week at FHE for the past forever? For all of Benjamin's existence at least. But last week Miriam chose Book of Mormon Stories instead and Benjamin totally lost his bearings. So we had to sing Jesus Wants Me for a Sunbeam before we could carry on. The same thing happened this week.

"Welcome to Family Night!" Rachel announced. "Daddy is going to say the opening prayer and Miriam is going to choose the song."

He didn't stop yelling about jumping and beaming and songing until we sang Jesus Wants Me for a Sunbeam and he and Miriam jumped into each other that one fateful "-beam!" and wrestled on the floor for a few minutes until there were tears.

Because that's how you begin Family Night. There is no other way.

But maybe if we keep singing two opening songs he'll get comfortable enough with Book of Mormon Stories that it will become an acceptable Family Night song for him. And then we can take a break from being jumping sunbeams for a while.

Anyway, for Family Night this week we taught our children how to use the phone. Because we just realized that they have no idea how phones work. We don't have a landline so first we had to explain that little bit of archaic technology to them.

"I know about those phones!" Rachel said. "You can't even take them out of the house."

"No, because they had to be plugged right into the wall," Andrew said.

"That is so weird!" Rachel said.

Now I know how my grandma felt when the cousins would curiously ogle at the old phone mounted in Grandpa's workshop.


We taught them how to unlock our phones and find the little phone icon and search through the contacts list. We worked on memorizing the numbers to my and Andrew's cellphones. We let Rachel phone Grandma. She held the phone like a walkie-talkie—away from her ear and close to her mouth.

Our children never use the phone.

But they're excellent at Skype. They can call their grandparents whenever they'd like using skype. They even called our friends in Morocco once. Accidentally.

Whenever we talk on the phone Benjamin wanders over and says, "I see?" because if we're talking to someone we should obviously also be looking at them.

I remember, as a child, dreaming up telephones where you could actually see the person you were talking to. I thought it was such a fantastic idea. And now we have that ability. And my children think calling someone without seeing them is unfathomable—it's without fathom.

I hope tomorrow is as good of a day as today was, though wishing for that also might be without fathom. Because today was awesome.
Posted by Nancy at 11:28 PM