While we were at the museum I got an email "reminding" me of the annual 4th of July bike parade in our neighbourhood. I say "reminded" because this was the first I'd heard of it. It was short notice for spectacular bike decorating but I told the girls about it because we have zero plans for the 4th. They went to work right away—like, we pulled into the driveway and they went into the house, grabbed the key to the shed, hauled their bikes out, and started taping paper all over their bikes before I'd even carted sleeping Benjamin into the house.

I'll leave Rachel's bike a surprise for tomorrow since she did it all on her own.

Miriam and I worked on her tricycle together. We turned her/her bike into a unicorn. She's super excited about it. 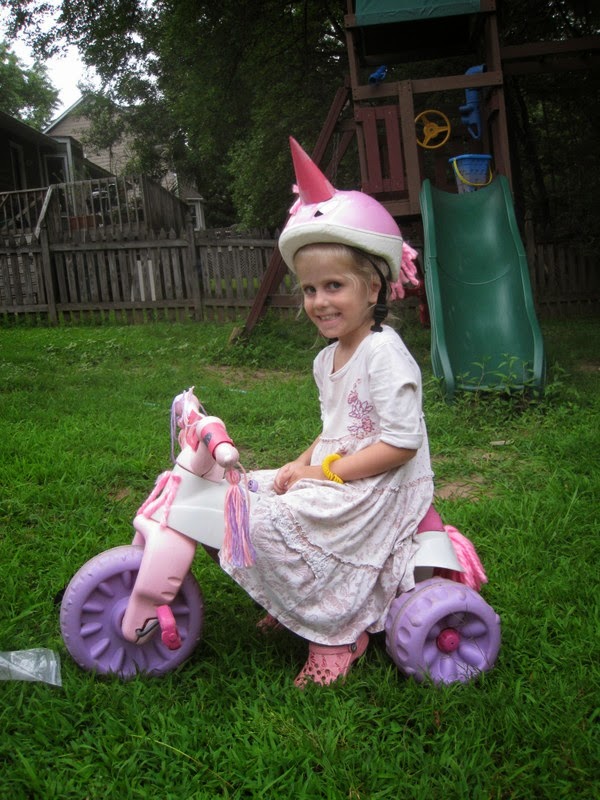 Here's Miriam the Unicorn putting some finishing touches to the front of her bike: 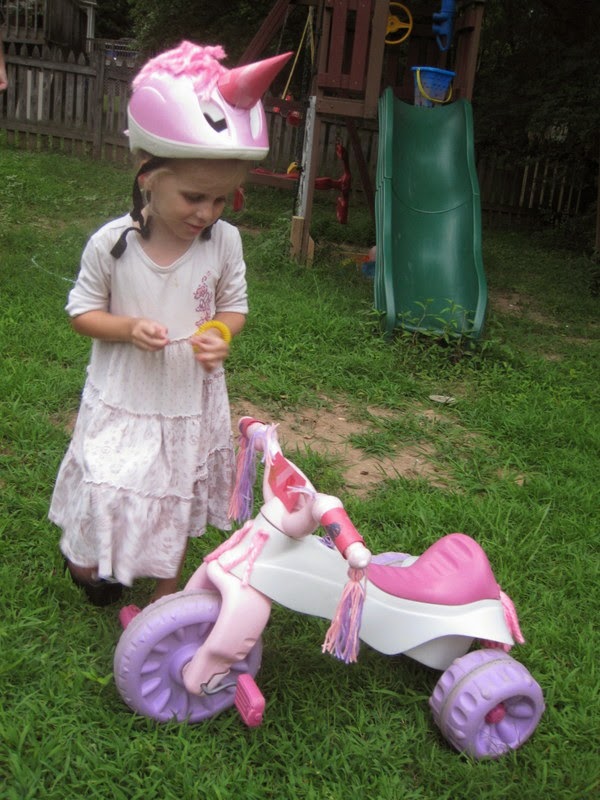 When Andrew saw it he asked if she was Princess Unikitty. She's not (and has so far refused to agree to the idea). But that would have been brilliant.

The girls helped Benjamin decorate his John Deere tractor as well. They put some yellow yarn in the back for hay and added a toy horse. We taped a stick to the side for a flagpole and Rachel's planning on drawing a flag for him to tape onto it. (He's sitting on it backwards in the picture, if you can't tell): 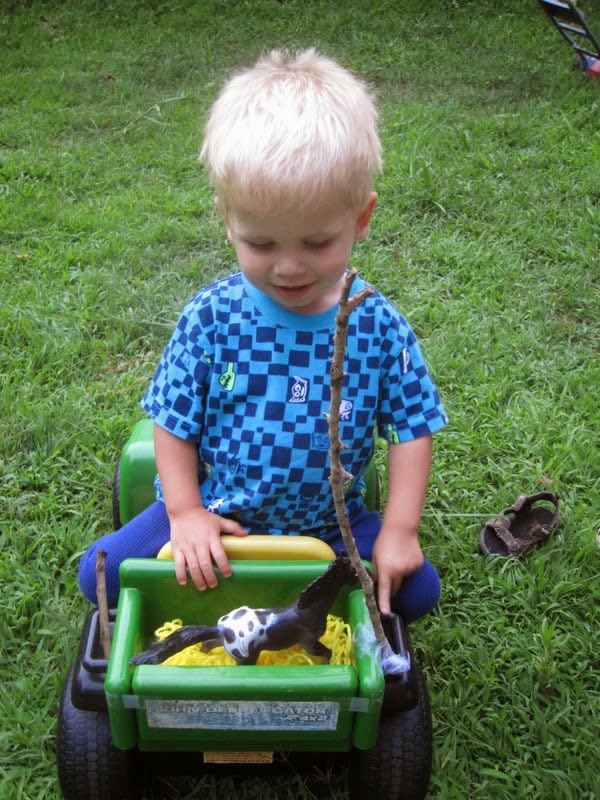 Our friend Alexa came over with her bike, which was appropriately decorated in red, white, and blue. When she expressed shock that we hadn't bedecked our bicycles with patriotic paraphernalia Rachel began to feel a little self-conscious. She began to second guess the theme of her bike and all the work she'd poured into it.

"Guys!" Alexa said. "It's a 4th of July parade. You're supposed to decorate your bikes for America. You know—red, white, and blue."

"That's not what I understood from the announcement," I said.

Because this is what the email said: "Participants can roll on their bike, skateboard, stroller, or any other wheeled, non-motorized contraption. A local fire truck is scheduled to lead the way. Afterward we'll offer popsicles and drinks, along with a contest with prizes for best-decorated bikes."

It said nothing about having to pay tribute to Uncle Sam.

"Wouldn't the parade get a little boring if everyone's bikes were just wrapped with red, white, and blue?" I asked. "Won't it be refreshing to see something different?"

"I guess so," Alexa said. "But I don't think anyone's ever done it before."

Alexa has lived here forever and is very involved in the neighbourhood goings-on. So she should know.

"We'll be the first, then," I said. Though I doubt we really will be. If we are, then surely that gives us a good shot at the prize for being most unique.

Alexa's own bike was beautifully self-decorated with (appropriate) red, white, and blue streamers. She'd taped pom-poms to her handlebars and attached some stuffed animals holding hand-drawn flags to the front. We appropriately praised her decorating job, of course, but I also didn't want my girls to feel like they had to abandon their original ideas to conform so I felt like I had to counter Alexa's "you must do it this way" attitude pretty strongly. She's a few years older than Rachel and my girls tend to go along with most of her plans quite willingly (which is fine because she's a great kid and has great ideas, but it's also not fine because...my kids need to be a little more assertive, I guess).

I think they'll have fun tomorrow even if they are the only ones riding unpatriotically themed bicycles. We'll have exhibited ample patriotism by showing up in the first place, right? Right.
Posted by Nancy at 11:58 PM