All the way to Andrew's birthday

This little lady has been rather crabby lately. I feel like all I've done this week is try to make her stop fussing. I know that's not entirely true because we went to soccer on Tuesday, where, admittedly I spent my time trying to make her stop fussing (and I succeeded because she eventually fell asleep (and look how cute she is)). 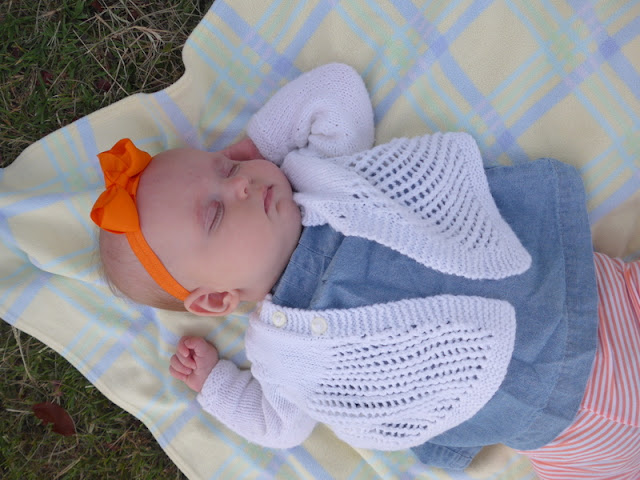 Wednesday Andrew had a long day on campus. I'm sure I spent most of my day trying to get Zoë to stop fussing.

Thursday I took the kids to the park and Zoë actually was remarkably unfussy. Miriam, on the other hand...was kind of fussy.


It's so nice to have big helpers at home. I'm not sure I can reiterate that enough. Rachel's just so helpful with Zoë! It's nice to have an extra pair of hands around when she comes home from school. Miriam is helpful, too, just a little less capable (on account of...she's five) and Benjamin is...Benjamin (on account of...he's Benjamin)), but Rachel's helpful. 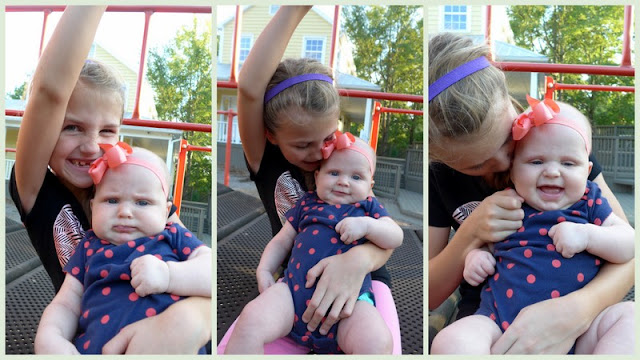 On Friday we had to go to school for an AIG conference. Then we had to come back to school for Miriam's show and tell (she wanted to play the ukulele for her class). After school I remembered that I needed to do some things for the fall carnival, so I left Rachel in charge of all the kids in Miriam's classroom (the assistant teacher is a good friend and has daughters Miriam and Rachel's ages—I think I mentioned that before—and though my friend wasn't there, she left her girls there so I figured it would be okay for me to do the same). I ended up being gone longer than I thought I would, and Rachel was getting a little frustrated with fussy Zoë, but was just pacing the hall with her while the other kids were playing with blocks.

I was able to do what I needed to do for the carnival without four shadows following me around.

We went to ukulele when we were finished and Benjamin sat and played through two whole songs. He can only play a C chord and he is the world's worst strummer, but let's all applaud him for sitting through two entire songs. That's amazing.

The girls did great at their practice as well. The last practice we had did not go so well. They fussed and complained and kept trying to bargain their way out of it and I was so furious by the time practice was over that I made them clean their room when we got home (and pick out ten things for the giveaway pile) and practice music for twenty minutes.

"But we just had ukulele practice," they complained.

"But you didn't really practice," I pointed out. "And if you complain more you'll be practicing for twenty-five minutes."

I think one of the girls actually did get bumped up to twenty-five minutes due to continued misbehaviour.

But this week? They were golden. They were cooperative and focused and it was just great.

Today was a crazy busy day with soccer and the fall carnival and grocery shopping and the stake women's day and Andrew's birthday, but we managed to pull it off. Zoë fussed the entire day at women's day. I went to about five minutes of the first class and then wandered around the halls with (a screaming) Zoë and helped a lovely hispanic lady find her class (she spoke about as much English as I did Spanish but somehow we made it work). She didn't even seem to mind that Zoë was screaming her guts out.

I sat through about ten minutes of my next class when I had to leave, which made me sad because that's the class I really, really wanted to attend. I went to the mother's lounge, which is very inconveniently in a bathroom stall in the bathroom (like, there is a rocking chair in the handicap stall?!). Zoë is still doing this nursing strike thing where she wants to eat...but also will scream and scream and scream before she realizes that in order to eat she has to...eat. GAH!

Once I had her latched on and she was committed to eating (because sometimes she'll unlatch to yell at me a few more times before really settling in to eat) I went back to the classroom, which involved opening four doors (quite the feat when you're nursing).

She nursed through the rest of that hour, but I wasn't able to take any notes and knew that I wouldn't remember much because my brain! So when it was over I cornered a girl that I'd seen taking notes on her tablet and asked her if she'd email them to me. She said she would and texted me so that I could text her my email address, though I've yet to receive any notes from her I'm sure she'll get around to it.

"I think we were in the class together before, too. I felt so bad you missed it! It was so good, but, man, can your baby scream, or what?" she said.

Yeah, I know. And as circumstance would have it she was in my third class of the day, too, which was good because although Zoë wasn't particularly fussy she did manage to poop four times that hour. Now she can just send me her notes from the entire day!

My classes, in case you're wondering, were "Innovators, Revelators, Believers: Women of Faith in the New Testament," by Luke Drake (a UNC graduate student of religion), "Writing Children's Picture Books 101" by Camille Andros (she has a book coming out in 2017), and "Producing in the Piedmont: a Practical Approach to Gardening Year-Round in North Carolina," by Jordan Mangum (I really need to plant that broccoli starter she gave me).

There was a service project, too, but it involved sewing and...I can't sew. I brought in some donations though.

Zoë fussed through the first little bit of lunch, too, before she finally fell asleep. After four hours of dealing with a fussy baby while also trying to get my brain to retain information (not to mention just barely getting over a cold), I was exhausted, so I was happy to come home to an empty house.

Poor Andrew took the other three kids to soccer, and then to the school carnival, and then grocery shopping. I thought about making him a birthday cake but then I thought sleeping sounded rather nice, too, so Zoë and I took a fabulous nap together.

When I woke up, the kids were playing outside and Andrew was puttering around the house. I sat on the couch and chatted to him while I tried to get over my post-nap fuzzy-brain. While we were talking, Benjamin came to the door.

"What happened to his hair!?" I gasped. 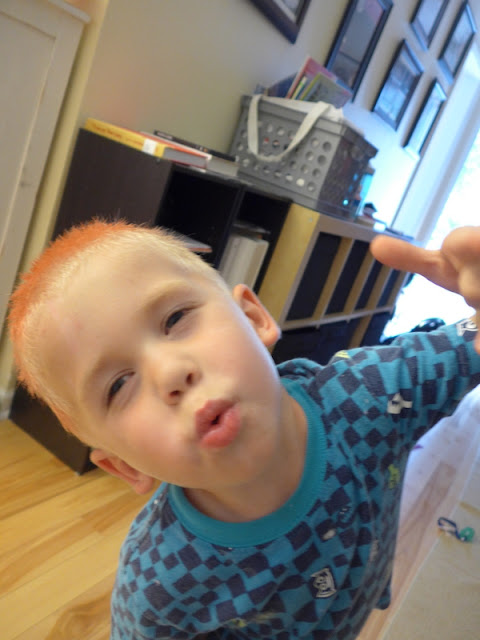 The kids all wanted to get their faces painted at the carnival but they had art students doing it and while they were doing a phenomenal job they were taking forever and Andrew didn't want to wait forever. He wanted to spend all their tickets and be done with it (and I don't blame him—he had a long day with those kiddos) so he convinced them to go to the hairspray booth instead, since the line was shorter and dying your hair takes, like, ten seconds.

So that's what Rachel and Benjamin did (Miriam went to the fingernail polish booth instead). 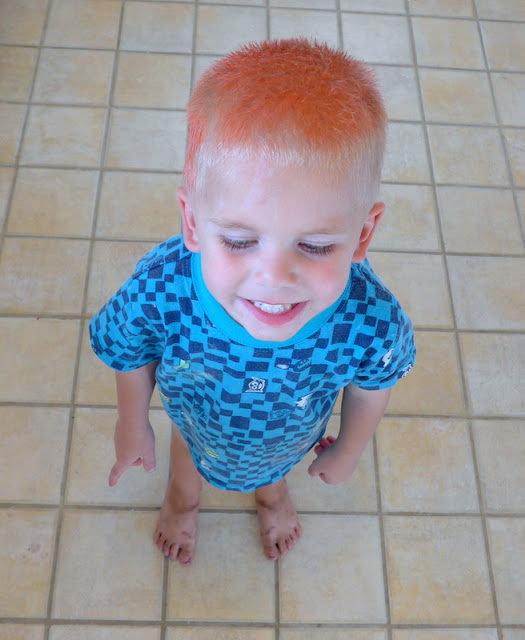 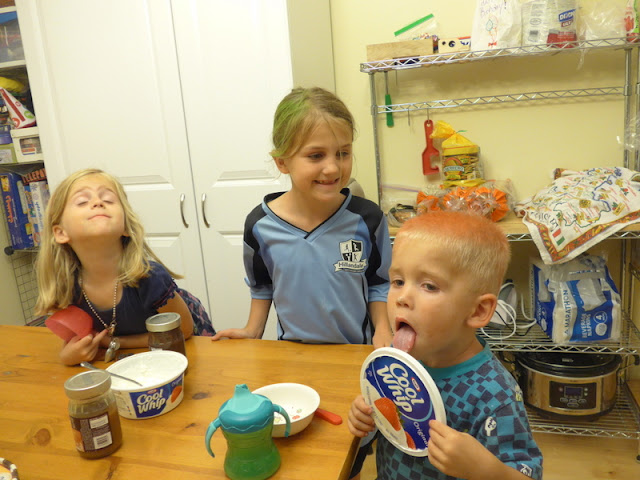 Andrew wanted to go out to dinner for his birthday, so we went to Moe's. We got a few weird looks because not only were traipsing around town with four children, two of those children were sporting strange hair colours, three of those children were frightfully dirty from playing outside, and one of them was fussy, fussy fussy.

We survived dinner, though I brought my entire meal home in a takeout container because that's just how fussy Zoë was. I spent the whole time trying to make her stop fussing! It's my life!

We grabbed a carton of ice cream on the way home and I said that we should stick a candle in it, but Andrew didn't want to, so instead here's a picture of him just holding a candle while we sang to him: 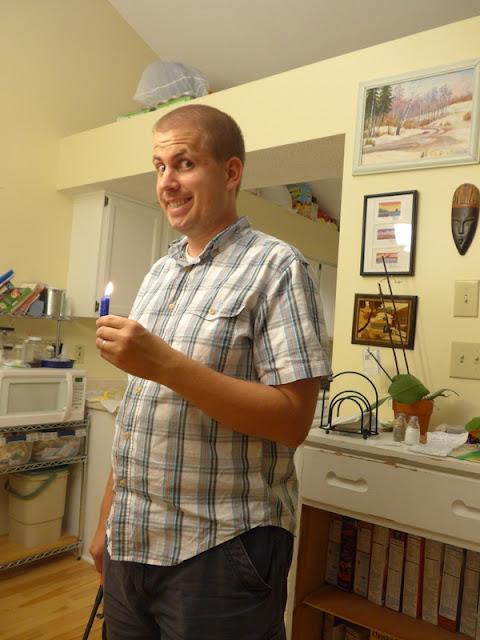 I'm pretty sure his family had a better birthday for him a few weeks ago.

Seriously—we called to Skype with his parents and all of his siblings were at their house having a birthday party for Andrew, which they'd apparently been emailing about all week. I guess it started out as a joke—that they'd have a party without him—and then it turned into reality.

They even had a cake made.

That's more than I managed to do this year...

We opened gifts after our ice cream and inside the card from my parents was a twenty dollar bill.

"Wow!" Rachel said, picking up the money. "A twenty dollar bill! You're so lucky! These things are super rare!"

"Yes, they are!" she insisted. "I've never seen one before!"

"Sure you have," Andrew said.

Phew. So, that gets us caught up with the week. May I never go that long without blogging ever again. (May I never get an obnoxious cold and have a sleep-fighting baby at the same time ever again).
Posted by Nancy at 11:41 PM