Ackland (not New Zealand) and Gimghoul Castle (not haunted)

Our original Labour Day weekend plan was to go hiking but by the time we were ready to go a big thunderstorm was looming overhead so we scratched that plan and went to UNC's Ackland Art Museum and had a great time there.

This little piece is an indoor version of "The Unsung Founders," both by Do-ho Suh. Both represent the work of enslaved people in building up the Carolinas. For the indoor exhibit he designed little plastic figurines that he had a toy company manufacture. They're all working together to hold up the plexiglass floor the kids are standing on. It was amazing to see (and shameful to think about what inspired it). 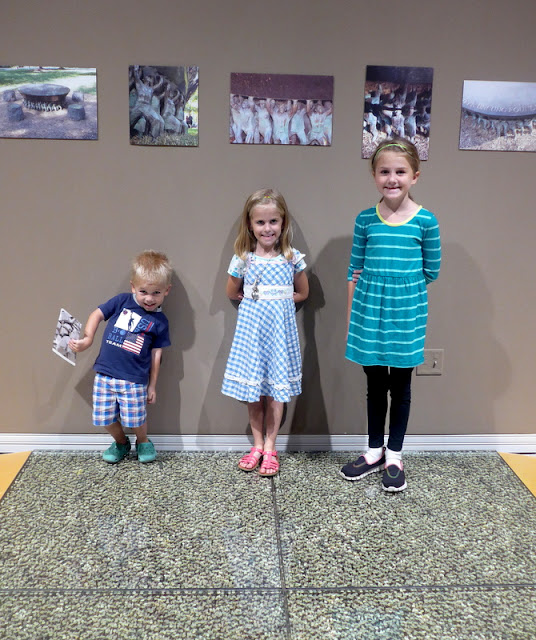 Miriam was rather impressed by the size of the orange and maroon painting behind her; I think she looks rather contemplative here: 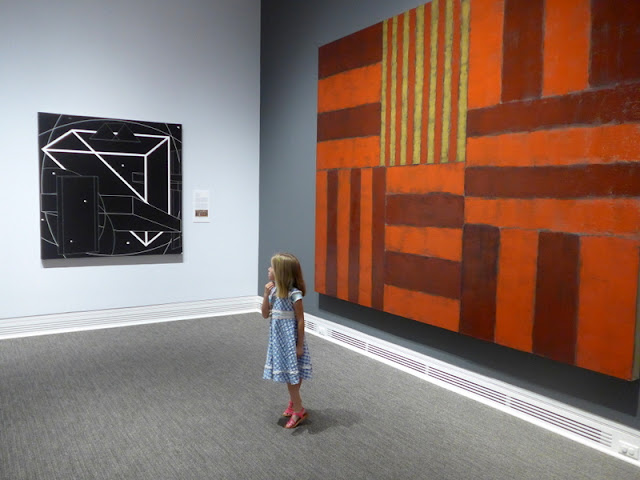 And here's Rachel and Andrew doing some art gazing as well: 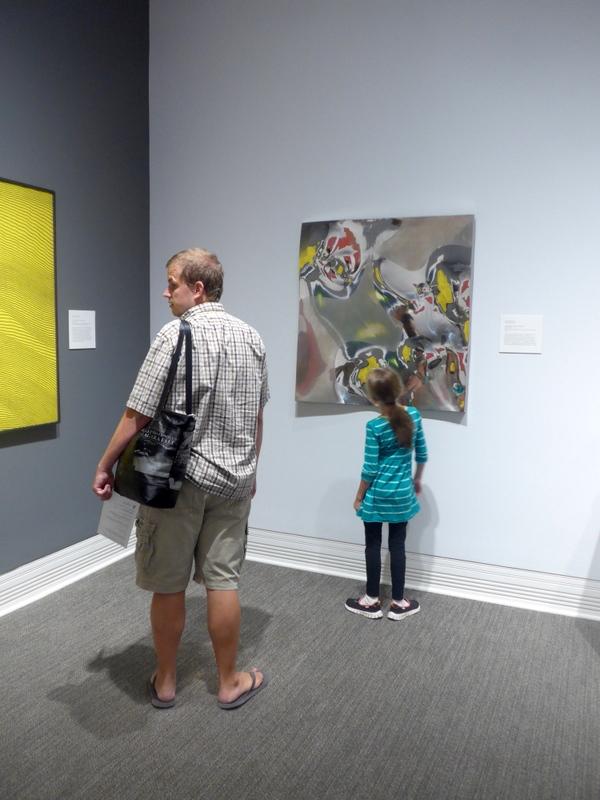 The kids thought this piece was really funny: 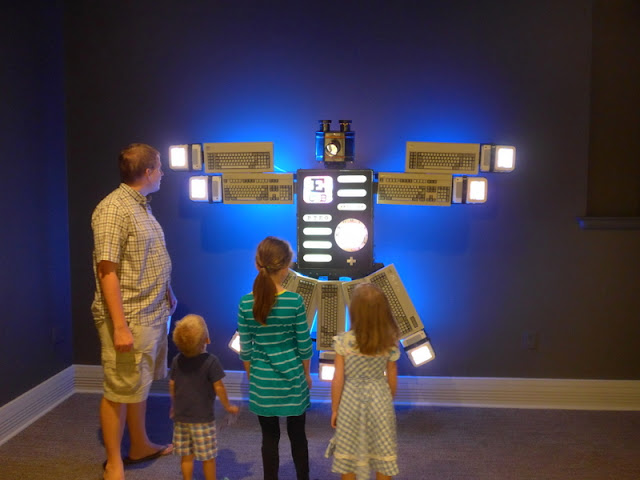 The kid enjoyed the historical sections of the museum as well, though they were a little scandalized by all the naked bodies (those Romans, I tell you!), and when Benjamin saw this piece of a broken vase he became really concerned. "Broken pot?!" he said with his face all scrunched up. 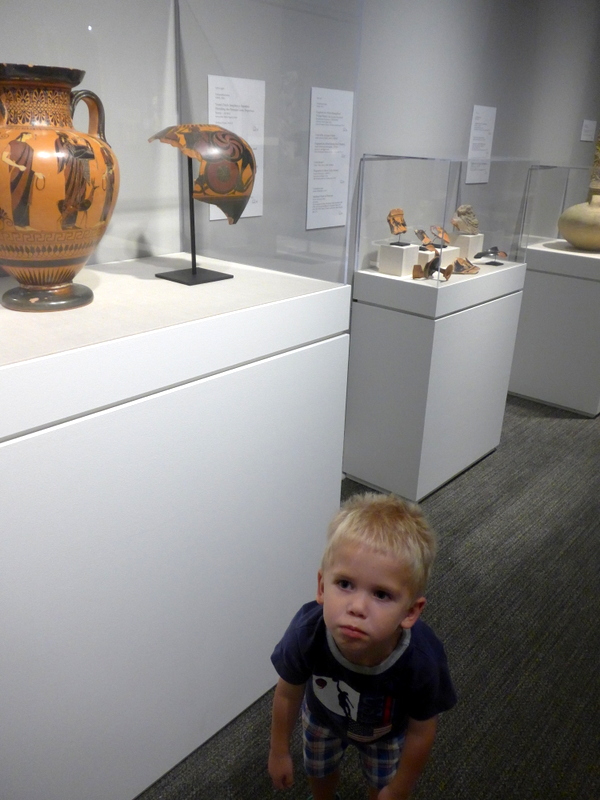 His favourite part of the whole day was seeing the "prophets." It was just a wall with a line of busts of various people, but I suppose it reminded him of "The Hall of the Prophets" we saw in the Conference Centre when we were visiting Utah. This woman was at the end of the line of busts: 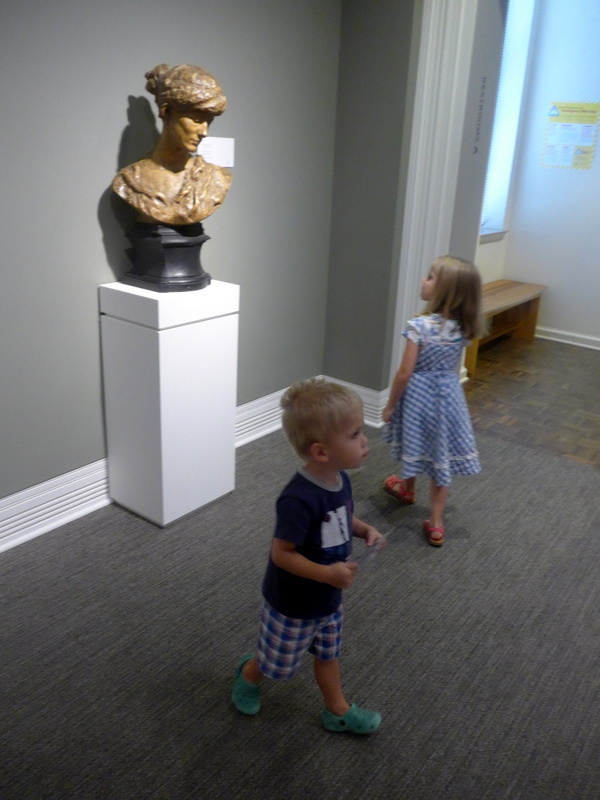 My favourite painting was a piece by Rachel Howard called "Gluttony." I can't put my finger on why, precisely. I just know that when I turned the corner I said, "Wow." It's quite bright. 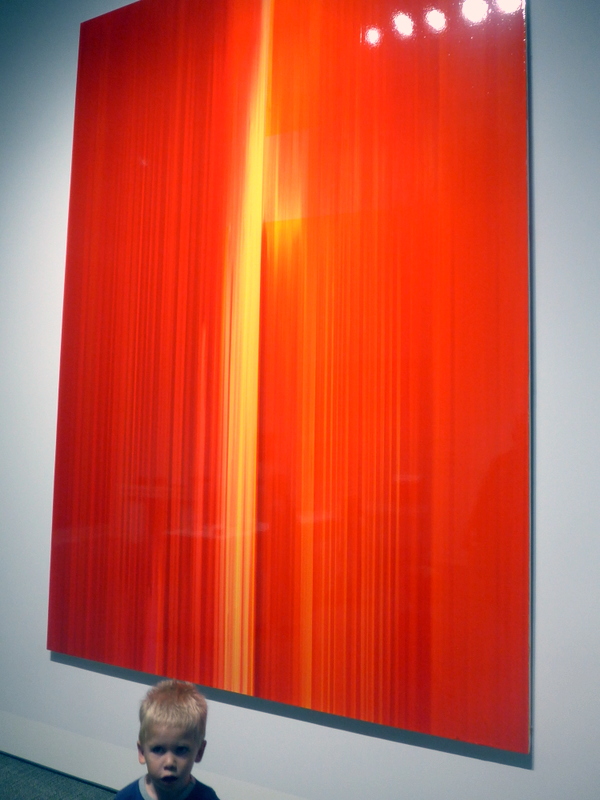 Here are some pictures of the kids walking on the campus wall on our way back to the parking lot: 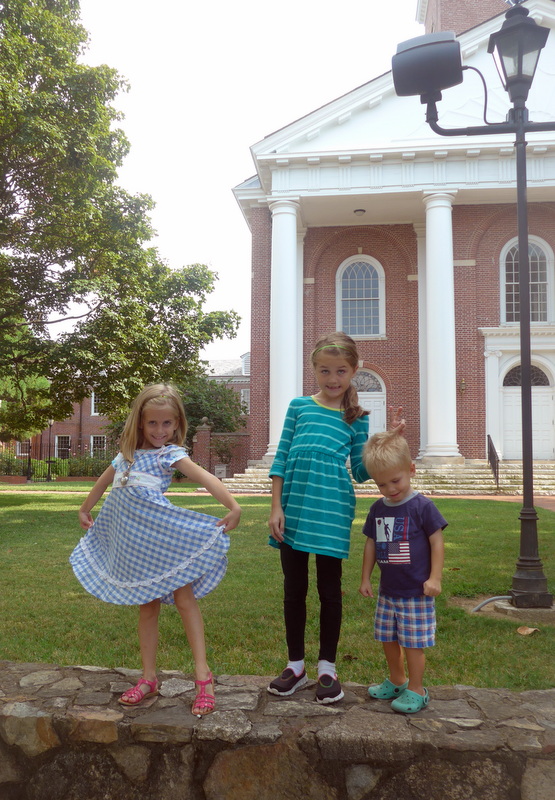 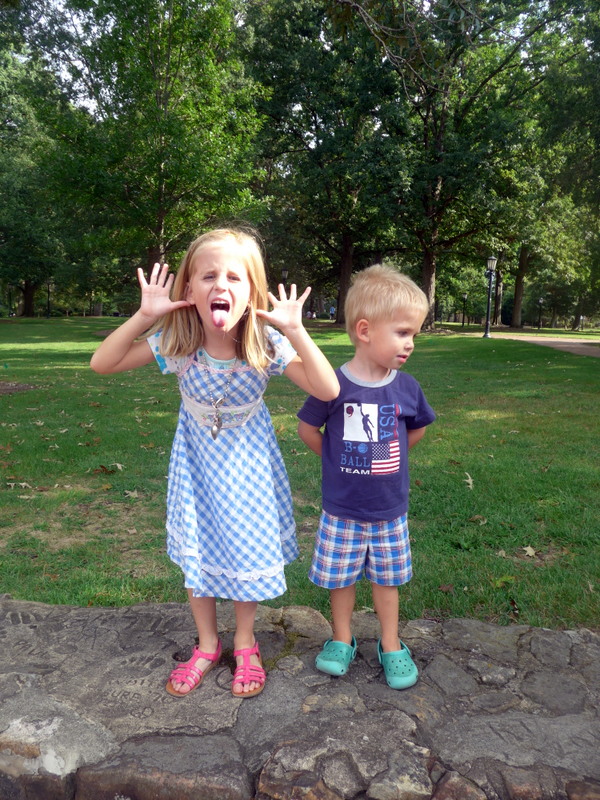 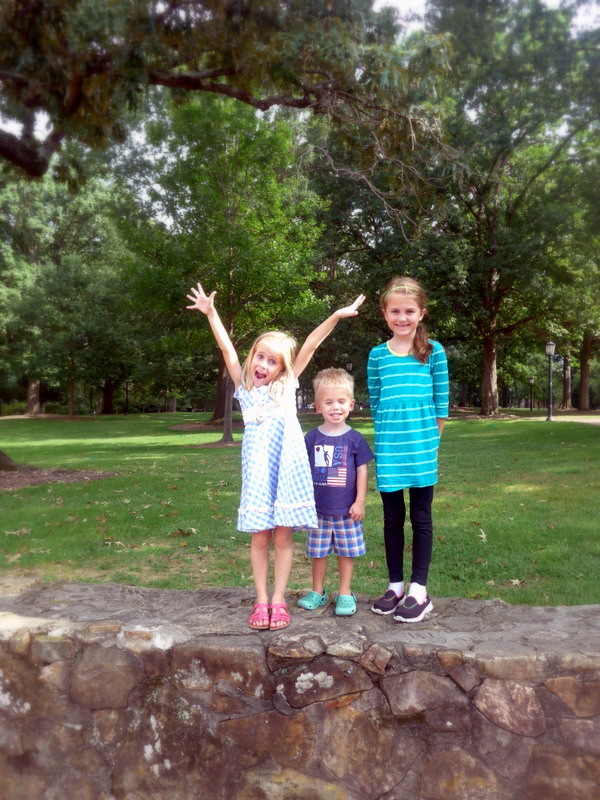 Our next stop was Gimghoul (or Hippol) castle, the headquarters for a prestigious UNC secret society, which was founded in 1889, though the castle itself wasn't constructed until the 1920s. 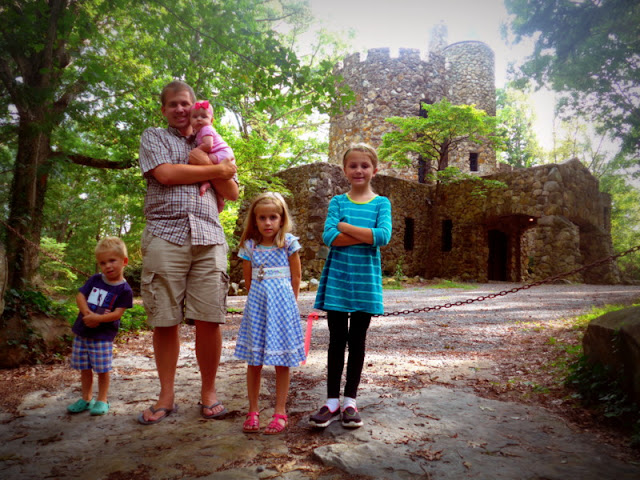 The society adopted the legend of Peter Dromgoole as the "basis" for their secret society—borrowing, from its founding, the intrigue and mystery surrounding the disappearance of Dromgoole. 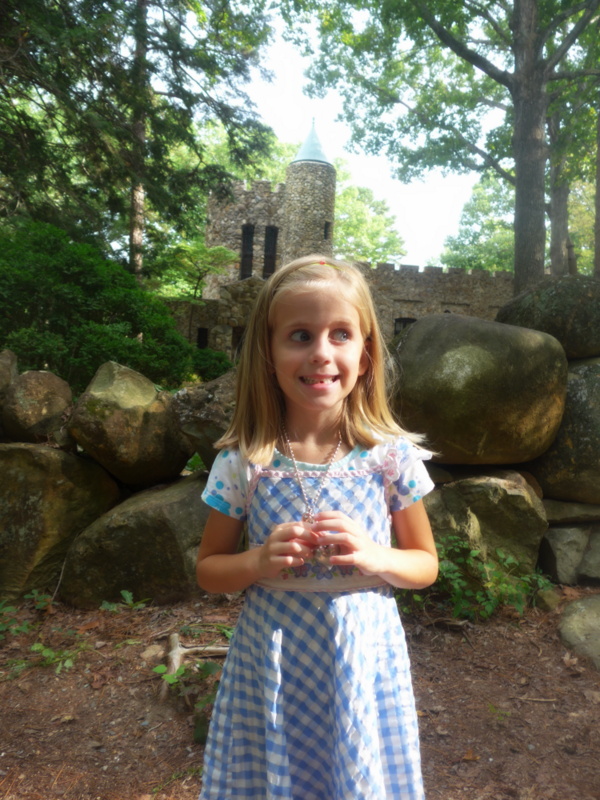 Our poor kids were quite nervous to be visiting a haunted castle; it didn't help at all that—in spite of how bright and sunshiny it looks in the pictures—we could hear the distant rumblings of thunder (probably the very storm we were avoiding hiking through). 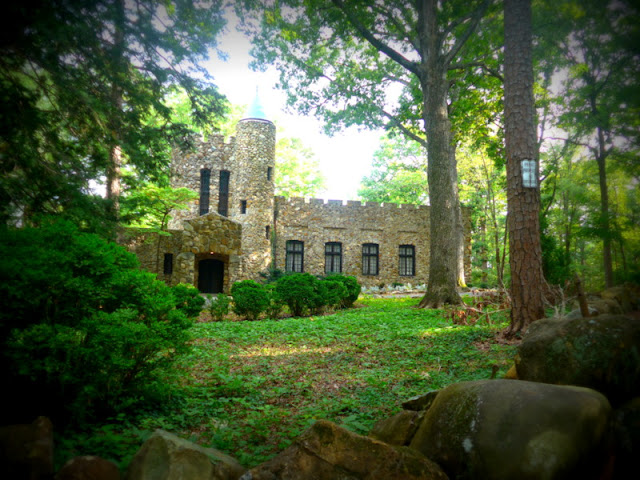 Andrew suggested we go back for family pictures. We shall see...

Our last stop for the day was our very own public library so we could return scores of books and check out scores more. Poor Zoë was starving by this time and though her nursing strike is improving (she nursed at the art museum, all tucked up in the front carrier without a problem) she still can be pretty picky and she was not going to nurse in the library (and she had a lot to say about this).

As soon as we got home, though, she nursed without a problem, thank goodness!

One day soon I think she might turn into regular ol' Zoë again—the girl who will eat anytime, anywhere. I can hardly wait because all this fussiness is driving me crazy!
Posted by Nancy at 11:43 PM